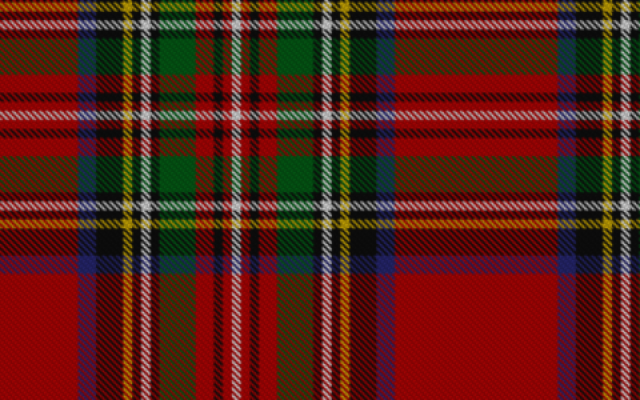 After four years of living in Scotland, I got the hang of most of the Scottish cultural icons. Haggis and bagpipes and tatties and neeps; whisky and Nessie and Burns suppers; ceilidhs and the military tattoo and the Edinburgh Fringe.

But perhaps the thing most closely identified with Scotland is the kilt. The simple stripes of the tartan weave (known to Americans as “plaid”) have been adopted into mainstream fashion, from the 1970 punks on Carnaby Street to the tartan flannel shirts worn in San Francisco in 2018.

But if you want to wear a kilt, make sure it is kosher. I was once about to try on a kilt on Edinburgh’s Royal Mile when Howie Nicholsby (who went on to create 21st Century Kilts) came running to the changing room to warn me that it was shatnez (a forbidden mixture of wool and linen).

Even if you don’t want to actually buy a kilt, for a mere £70 you can register your own personal tartan (which is not that much more expensive than naming a star after yourself and you can’t wear a star). Kilts (which are absolutely nothing like skirts) remain the most iconic symbol of Scotland. And in Scotland you learn quite quickly what a Scotsman wears under his kilt — his socks, his sgian dubh and his ghillie brogues. 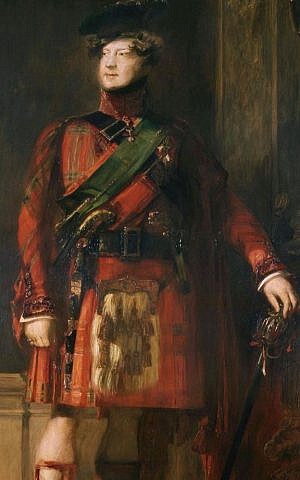 David Wilkie’s portrait of the kilted King George IV during the visit to Scotland in 1822. (Public Domain, Wikimedia Commons)

So it is interesting to note that the modern “short” kilt was actually invented by an Englishman. In about 1720, Thomas Rawlinson, a Quaker from Lancashire, is thought to have been the first person to take the Highland belted plaid or great kilt and turn it into the modern kilt (which is definitely nothing like a skirt).

However, the short kilt didn’t last long because, in 1764, King George II banned the wearing of any Scottish kilts or tartan with the Dress Act (nothing to do with skirts) as part of an attempt to put down the Jacobite Risings. For 35 years, Scots faced six months imprisonment for wearing plaid. But King George III repealed the ban in 1782, and by the time King George IV came to visit Scotland in 1822, the kilt had transformed from a garment worn by highland clans to a symbol of Scottish identity, even though by now the vast majority of the population had moved to the cities in the lowlands. And to this day it remains symbolic of Scotland.

I know the connection may be tenuous, but in my mind, the tartan kilt with its colored stripes reminds me of Joseph’s coat, which despite what Tim Rice and Andrew Lloyd Webber would have you believe was not actually a technicolor dream coat but a tunic with stripes (at least according to the plain translation of the Hebrew).

Of course Joseph wasn’t wearing a kilt, and probably not even tartan. One theory posits that his father may have purchased the coat from Mycenaean Greek traders. There is evidence that the Bronze Age Greeks traded throughout the Mediterranean, including with the Canaanites. And if the small terracotta figurines from the era are to be trusted, the people may have worn striped clothes (or perhaps garments with a zigzag pattern).

Clothes are first mentioned in the Torah when Adam and Eve were exiled from the Garden of Eden, but are hardly mentioned again in the following Torah portions. However, clothing played an important role in Jacob’s life — his mother dressed him in his brother Esau’s clothing when he went to receive the blessing of the firstborn, and his father only blessed him after smelling the clothes.

By giving the striped tunic to Joseph, Jacob again put clothing in a central narrative role. Joseph was sold by his brothers because they were jealous of his clothes. When Reuben discovers that Joseph is not in the pit where the brothers threw him he “rent his clothes,” (Genesis 37:29), and a few verses later, Jacob rends his own garments when he is told that Joseph is dead. In the next chapter, Tamar “put off her garments of widowhood, and covered herself with her veil,” (Genesis 38:14). And when Potiphar’s wife tried to seduce Joseph, “she caught him by his garment, saying: ‘Lie with me.’ And he left his garment in her hand, and fled, and ran out,” (Genesis 39:12). And it was that garment that she used to convince her husband to throw Joseph into jail.

Clothing is an important prop at every plot twist in this portion. And in next week’s portion the Torah mentions specifically that the Egyptians changed Joseph’s clothes when he was brought out of jail to meet Pharaoh (Genesis 41:14), and after interpreting Pharaoh’s dream he is dressed in fine clothes (41:42).

Clothing remains so important to this day. Even though we pay lip service to not judging a book by its cover, we all judge others based on how they dress. Our clothing marks us as part of a group or team and distinguishes us from every other group. One of the reasons I love cricket (and why Americans will never understand it) is that in test match both teams wear the same white outfit. However, in the shorter versions of the game players wear colored pyjamas, as they do in almost every other sporting contest between two teams.

From school uniforms to military fatigues, from casual dress to top hat and tie, clothing tells others who we are, says something about our beliefs and our attitude to life.

But not only are our clothes a signal to others, they also influence how we think about ourselves. Scientists have found that wearing a lab coat worn by a doctor actually made people perform better in intelligence tests.

Clothing is key to the plot development of the parsha, but usually it leads to a negative outcome. As the English knew when putting down the Scots rebellion, the clothes we wear mark us as part of a clan, which can unite us with others, but at the same time separate us from those who are different. Not only externally are we marked as different, but even in our own minds.

Polonius warns his son Laertes before his departure to Paris that in France people judge others by their clothes:

“Costly thy habit as thy purse can buy,
But not express’d in fancy; rich, not gaudy;
For the apparel oft proclaims the man,” (Hamlet: Act 1 Scene 3)

But it is not only the French. Shakespeare’s words are just as apt for each of us both when we judge others and when we take stock of ourselves.