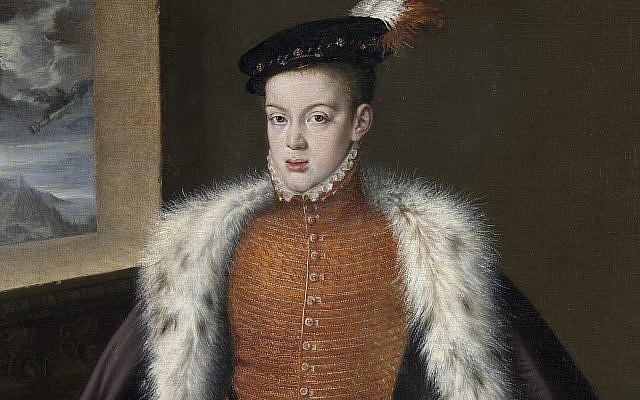 Our story takes place in Spain in the 16th century. The truth is that Don Carlos, the eldest son of Prince Philip II, was a nasty piece of work. He was mentally unstable, cruel and enjoyed torturing animals and people. Once, while out walking, he was splashed with water thrown from a window. Carlos demanded that the entire house be burned down. He tried to stab the Duke of Alba to death, once threatened to throw a servant girl from a window on the highest story of the palace, and plotted to kill his father. He was described by the Venetian ambassador as “ugly and repulsive.”

But this story, which I heard about in a RadioLab podcast, is not really about Carlos. It is about the lengths his poor father went to in order to save Don Carlos’s life.

Mary, Queen of Scots, eager to build an alliance with Catholic Spain, was seriously considering marrying Carlos until his accident and subsequent brain damage.

In 1562, at the age of 17, Carlos tripped and fell down a flight of stairs while chasing a servant girl. He hit his head as he fell, and collapsed into bed, where he hovered between life and death for several weeks. Philip sent for the best doctors to try to save his eldest son’s life, but no medical treatment helped. They brought the body of Diego de Alcalá, who by this time had been dead for almost 100 years, to Carlos in the hope that the holy relic would cure him. Diego had been a Franciscan monk and he was so well-known for his miracles that the US city of San Diego was named after him. 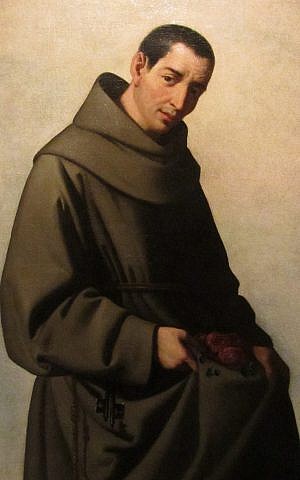 In desperation, Philip promised he would perform a miracle for God if God would perform a miracle and save Carlos. And miraculously, Carlos recovered. Sure, some say the doctors cured him using trepanation (drilling holes in his skull). But when he woke up, Carlos told his father that he had a dream that Saint Diego came to visit him and led him to health. And a miracle is a miracle, and Philip had to make good on his end of the bargain.

However, Philip’s act for God was something quite out of the ordinary. He did not fulfill his vow by building a church or by embarking on a holy war or one of the more traditional acts of devotions. Instead, King Philip II of Spain repaid God for saving his son’s life by… commissioning Juanelo Turriano, a famed clockmaker, to build him a clockwork praying monk.

And it was not just any monk. With his thin, narrow head, and long Franciscan robe, the robot is clearly a model of Saint Diego de Alcalá.

Incredibly, this clockwork monk still exists, and is kept in the Smithsonian. Even more amazingly is that it still works after 450 years, and you can see it in this YouTube video.

The figure walks in a trapezoidal pattern; moves both arms (right arm strikes chest in “mea culpa” and left arm raises rosary to lips); moves eyes side to side; opens and closes mouth; and turns head.

Nobody knows why Philip had the monk built. Was it to demonstrate the correct way of praying? Was it simply a curiosity to show guests? Did he think he had created something “alive” and thus a fair exchange for the life of his son? Or did he believe that the robots prayers were actually a profession of faith in God?

In “Dirk Gently’s Holistic Detective Agency” the late, great, comic sci-fi author Douglas Adams wrote of an android electric monk, that would believe the religious ideas that people found too difficult to believe themselves. He wrote:

Was the clockwork model of San Diego an early version of an electric monk?

I was thinking about the idea of automatic service of God this week as we begin the book of Leviticus in the weekly Torah-reading cycle and read the portion of Vayikra. A large part of the book is taken up with intricate laws of how to bring sacrifices in the Mishkan, and later the Temple.

Seven days a week, 365 days a year, the priests would offer burnt offerings, guilt offerings, peace offerings, thanksgiving offerings, meal offerings and a whole lot more. Some sacrifices were communal; some were brought by individuals. But day in and day out, the priests were working in shifts to keep feeding the hungry altar with meat, flour and wine.

Every offering had to be brought with the correct intent — in fact with many specific intents. But I wonder how the priests found their individuality among all the rites and rituals. Were they able to concentrate on the spiritual meaning behind the sacrifices, or did they become automatons going through the motions?

As Isaiah said (1:11-17), it was not the number of sacrifices that God wanted but rather the correct actions of the people.

Why do I need all your many sacrifices, says God, I am sated with burnt offerings of rams and the fat of the herds; I do not desire the blood of bulls and sheep and goats… Wash yourselves, become clean, remove the evil of your deeds from before My eyes, cease the evil. Learn well, seek justice, help the oppressed, judge the orphan, fight for the widow.

Today, there is no Temple and no sacrifices. But we have prayer in its place. But repeating the words of the siddur three times each day (and more on festivals and Shabbat) can sometimes become a ritual, rather than a heartfelt plea. Sometimes, we walk away from our prayers and display behavior totally at odds with the words we just recited.

In Vayikra Rabba (1:7-8) Rabbi Shmuel bar Nahman notes that the phrase “As God commanded Moses” appears 18 times in last week’s Torah reading which described the construction of the Mishkan. He explains that this corresponds to the 18 blessings of the daily prayer. And only afterwards, do we begin the new book with the words, “And God called to Moses.”

It is easy to act as a robot when reciting prayers. We sometimes act a lot like the clockwork android built by Philip II. But if we want to hear the call of God, we must ensure that the words of our prayers are not merely “going through the motions” but that they have an impact on how we live our lives.