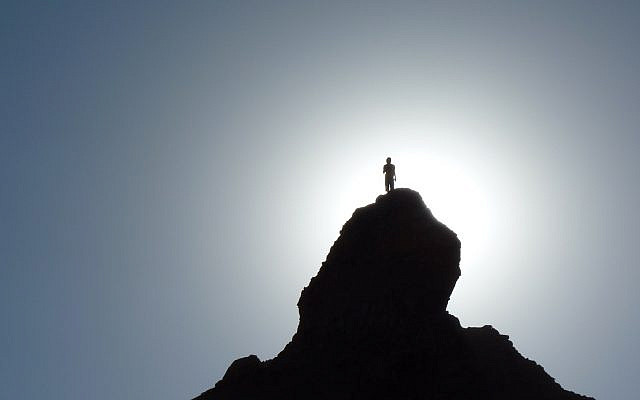 A backpacker conquers a mountain (Pixabay)

What is our essence? In the clash of our valued principles, which supersedes the other? Do the beliefs existing inside of us manifest themselves into reality? These are the questions that challenge the identity we assume in our heads with the actions we take in the world.

In Parshat Vayishlach, the Torah says, “Yaakov was left alone. And a man wrestled with him until the break of dawn” (Bereishis 32:25). What follows is a perplexing fight and dialogue between Yaakov and this “man,” who makes a subsequent blow to Yaakov’s thigh, violently tearing it (Rashi, Bereishis 32:26).
After that fight, Yaakov grabs the man, refusing to let go until he receives a bracha (blessing). Strangely, the man asks Yaakov his name, and Yaakov tells him. The man then says, “Your name shall no longer be Jacob, but Israel, for you have striven with beings divine and human, and have prevailed” (Bereishis 32: 29). This bracha seems bizarre—what is so significant about Yaakov’s name changed?

The Kedushat Levi makes an extraordinary comment on the man’s response to Yaakov. He elucidates the paradigm of two types of people: the first is a person who consciously recognizes his (or her) connection and relationship with Hashem, regardless of the mundane, seemingly meaningless activities he is involved with; the second person, however, can invest himself into his avodat Hashem (service to Hashem) while engaged in such efforts, but during conventional and ordinary things, his mind is devoid of his relationship with Hashem.
Practically, the former is a person who lives—or willfully tries to live—his life purposed towards fulfilling Hashem’s will of bringing goodness and divinity into the world through every aspect of his life. The latter is a person who can dutifully understand and see his relationship with Hashem in Tefillah (davening) or Talmud Torah (learning Torah), for example, but that does not extend beyond overtly “religious” activities.

The first model, the Kedushat Levi explains, should be called Yisrael, as the words yashar (upright) and rosh (head) are in the name. Contrarily, Yaakov has Eikev which means the body’s heel, a secondary, not primary, organ. Eikev meant that Hashem and the responsibilities He entrusted with people are secondary; Yisrael, however, put Hashem’s delegated mission to man at the forefront (or rosh) of importance, as he is conscientious (or yashar). The man that wrestled with Yaakov recognized that he never lost sight of his true purpose of bringing Hashem’s divine light into the world, whether in godly or mundane service—therefore, his name became Yisrael.

Ideally, in the Kedushat Levi’s archetypal model, our challenge should be struggling to become the first person, while we currently exist as the second person. While many of us do not necessarily fit the dichotomy he outlines, we can still derive a more fundamental question of living as our true selves.
Bringing goodness and godliness into reality is not limited to the times we go to shul or celebrate chagim (holidays). Rather, each and every moment in our life is an opportunity to bring Hashem into the world. Yaakov wrestled with the “man,” and he became Yisrael because Hashem was always at the forefront of his mind. We can attain that level of consciousness, but we first need to begin wrestling with ourselves.