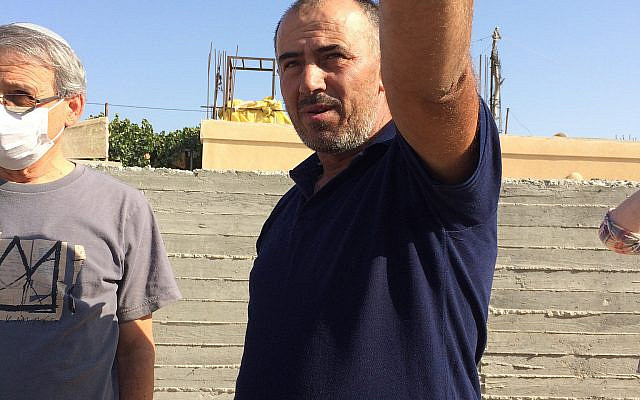 Last week, I went with a group from Tag Meir and Shomrei Mishpat to visit Sa’id Awaad and his family in their home in an agricultural village in the south Hebron hills. One hundred and fifty olive tree saplings that we had ordered to replace those that Jewish thugs had cut down awaited our arrival in front of Mr. Awaad’s house. 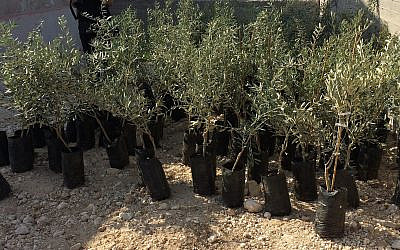 We first visited Sa’id last spring, after a savage attack on him while he was in his truck– with some of his children in the back– by Jewish thugs who threw boulders through the windshield, shattering it, and his jaw and several other bones in his face; beating him with a bar. We found him then, his face swollen and purple, his jaw held together by wires after surgery, recovering in a bed set up in his salon, where he received us.

We were pleased and relieved to see him this time, upright and back to his life– albeit, with permanent paralysis of part of his face and ineradicable scars on him and his family from the incident.

Unfortunately, what happened to Sa’id Awaad was not a one-time, irregular occurrence. Sa’id detailed for us– in fluent Hebrew, calmly, quietly– a pattern of systematic aggression by violent thugs from adjacent Jewish settlements, who encroach on his fields, erect structures (hot houses) and loose their sheep to graze there. All of this is part of concerted effort to appropriate his land. His village is composed heavily of his extended family, as is the pattern in the villages of Palestinian farmers, and this is meant for them all.

The army does nothing, is not authorized to do anything about even violent attacks on Palestinian civilians in area C, that is, Palestinians under direct and total Israeli control (that policy should end: https://www.jpost.com/opinion/is-our-history-wasted-on-us-opinion-661900).

Such protection is supposed to be the mandate of the police who, however, as Sa’id detailed, and as I know from various IDF soldiers, including close relatives, do nothing. Either the police don’t respond to calls for help; or they show up hours after the events and reject even photo and video evidence, saying that they can only act while the attack is underway, and with various other catch-22 insults to intelligence, never mind, rudimentary justice.

Sa’id Awaad takes legal action, which is long, costly, and at best, delivers partial results. Of course, wearing him out is a goal, in the bizarre, utterly detached-from-reality notion that abuse will drive him and hundreds of thousands of Palestinians in area C to disappear somewhere; drawn, perhaps, by the outstanding opportunities in Jordan, or Syria, or Iraq, or Lebanon. Why not Afghanistan? That, too.

Sa’id said something I have heard often on such visits: that he knows that those who behave as they do against him and his family are bad people but there are plenty of good, very good people among the Jews. It just brings me to tears, even now as I type it.

He said something else we should really, really pay attention to.

That before Tag Meir and its actions, there was total despair, particularly among the young people, about prospects for living in peace alongside Israelis. But that Tag Meir has introduced them to a different reality.

He also said that he has no issue with Jews living nearby. All are welcome, he said. Just not to steal from him, destroy his property, never mind, attack him. He and his family welcomed us with tea, juice, coffee, and even an offer of lunch to the dozen or so of us.

There is no question that Tag Meir is responsible for thwarting many, who knows how many or how horrific, terror attacks.

You bet there are.

Just not where those who normally engage that slogan seek them, or dismiss the existence of them.

Sa’id Awaad and his family—and so many other such families which I, but a small member of Tag Meir have met in way too many similar visits–  do not hate us all, wish us gone, deny our connection to this place, much less perpetrate violence. They just want to live in peace. Continue their lives, support their families. Just live.

It is they we should be engaging. Not in complicated political “processes” but by ordering the organs of our State to protect them from pogroms.

The simple act of good Jews behaving decently, and demanding that our State take responsibility for the power we wield over others, is what we can do for peace.

Peace with others with whom we are destined to share a future, and peace with ourselves, if we take with even a modicum of seriousness the words we recite again and again, that we worship a a divine Sovereign who “loves justice and law,” in whose Image we are created.

There is what we, regular, “small” people can do.

The IDF must be ordered to protect all civilians under Israeli control, not only Jews. There must be coherent, clear, strict orders to the police to enforce that policy. And zero tolerance for any who violate it, either as perpetrators of violence or as enablers of it.

This is what we can do for peace.

Because we do have partners. And there is, and can be, hope.

May they and we know peace in the New Year. It will happen if we make it so.