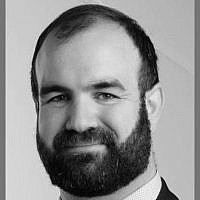 The Blogs
Raphael Brass
Apply for a Blog
Please note that the posts on The Blogs are contributed by third parties. The opinions, facts and any media content in them are presented solely by the authors, and neither The Times of Israel nor its partners assume any responsibility for them. Please contact us in case of abuse. In case of abuse,
Report this post.

Jews around the world are in the midst of celebrating Passover, the quintessential Jewish holiday commemorating the liberation from slavery of the children of Israel. For more than 3,400 years, Jews all over the world have marked this holiday by eating matza, drinking four cups of wine, and retelling the story of our ancestors’ exodus from Egypt. During this holiday, we are reminded of the hardships placed upon our people and are asked to imagine we ourselves were freed from bondage like our ancestors at the hands of the ancient Egyptians. This obligation has, sadly, been all too easy for many members of our community who survived the Holocaust or grew up in the shadow of millennia of persecution.

Enslavement in Egypt may have been the first documented act of antisemitism, but it certainly was not the last. Jewish history is plagued with expulsions, forced conversions, detention, and murder. While there has been a worrying uptick recently of antisemitic incidents, since the establishment of the State of Israel, state-sponsored acts of anti-Jewish hatred have largely abated. This has allowed Jewish communities in Canada and around the world to become established, contribute to the greater community, and advocate on behalf of others facing hatred, persecution, and genocide.

Right now, Jews in Canada and around the world watch in horror as, based on their religion, Uyghur Muslims in China’s Xinjiang Province suffer unspeakable cruelty. They have faced escalating persecution for several years, from harsh restrictions on movement and employment to sterilizations, forced labour, organ harvesting, torture, rape, murder, and other serious human rights abuses. Human rights organizations estimate that upwards of two million Uyghur Muslims are being held in concentration camps. These coordinated acts, designed to destroy the Uyghur people, appear to constitute genocide as defined by the Convention on the Prevention and Punishment of the Crime of Genocide. The Chinese government purports that these camps are voluntary employment and language-training centres, but accounts from the camps themselves reveal a regime of forced indoctrination of China’s Communist Party’s ideology to eradicate the Uyghur culture, language, and religion.

Just as during the Holocaust, the world community has been too slow to respond to the plight of Uyghurs, which was also the case during several other instances of genocide: in Rwanda, where close to a million Tutsis were massacred; in Sudan, where 400,000 Darfuris were killed; and, most recently in Myanmar, where countless Rohingya Muslims were systematically ethnically cleansed.

As Jews, we know the cost of silence. Jewish community groups have taken a leadership role in urging the Canadian government to hold Beijing to account for these crimes. This is borne of our obligation to remember our past and the result of generations of Jews taught that “never again” means “never again.”

In late February, Canadian Jewish groups warmly welcomed Parliament’s unanimous vote to recognize China’s actions against Muslim Uyghurs in Xinjiang province as constituting a genocide. We now strongly encourage the federal government to formalize the vote as official government policy and continue to work in concert with our international partners to pressure the Chinese government to stop their campaign against the Uyghurs Muslims.

Canadian Jews are heartbroken by stories from Xinjiang of families separated and loved ones vanishing as a result of this brutal oppression. We hope that our Uyghur Muslim brothers and sisters will soon experience an end to slavery and suffering and being able to enjoy the freedom to practice their faith.

As Canadian Jews celebrate another Passover away from our loved ones, we can console ourselves in knowing that this separation is merely temporary. In fact, many of us are already planning for large Passover meals next year, perhaps even in Jerusalem. May that same freedom soon be shared by Uyghur Muslims in Xinjiang and by all other oppressed people around the world.

About the Author
Raphael Brass, a Senior Consultant at Bluesky Strategy Group in Ottawa, Canada, is the co-chair of Centre for Israel and Jewish Affairs’ Young Professional Circle and a member of their Board of Directors.
Related Topics
Related Posts
Comments