Walking through the streets of the old Jewish Quarter in Barcelona, I had felt like time froze. Alleyways, streets, town squares, and the port stood in the exact same place they had been in 1492 when queen Isabella issued a decree to expel the Jews of Spain and kill those who remain and won’t convert. We walked the narrow streets where thousands of Jews walked to synagogue and led beautiful and creative beyond the parallel lives of Torah, poetry, and creativity. We saw the same stones that bore testimony to the expulsion of Jews from Spain just because their faith was different; we saw the very same cathedrals into which Jews were huddled for forced to convert to Catholicism. We stepped in the same square of the infamous auto de fe — where Jews caught keeping to Judaism were burned alive.

While the streets were bustling with tourists, the cafes were full, and shops were humming with visitors, all I could hear were the echoes of history; Jews celebrating holidays in Ladino, Shabbat songs and poetry, and the harrowing sounds of Jews burning at the auto de fe for the mere crime of observing Shabbat, Passover, or eating kosher food.

It was sad to see the official city signs pointing out the Jewish history of the old quarter, not mentioning how it all came to an end, ignoring the victims of the harrowing Spanish expulsion and Spanish Inquisition. My heart was overwhelmed with feeling the pain of the uprooted children, families, and entire communities who were dispersed all around the globe — from South America to the Far East. The sense of loss overwhelmed my ability to enjoy Barcelona’s beautiful architecture, markets, and art. Even as we approached the beautiful port where the Mediterranean kissed the brinks of Barcelona’s streets, all I can think of were the families forced to leave by sea on a salt-bit ship sailing across uncertain seas to wherever they can find a new home. 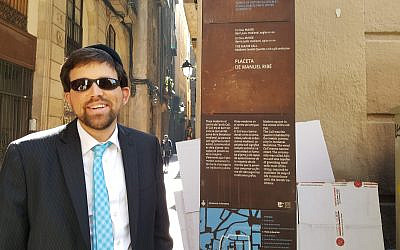 City plaque in the old city of Barcelona reading “Medieval Jewish Quarter 12th-14th centuries-as the main street of the call this was the site of the Great Syangogue, the butcher shop, and the houses of leading members of the community, as well as a gateway to the quarter at the end”. No mention of expulsion. Photo by Elchanan Poupko, copyright free

And yet, I found comfort.

Our one-day stop in Barcelona was a stopover on our way to celebrate Passover in Israel.

In Israel, we were blessed with the opportunity to observe the holiday of Passover in Kibbutz Lavi, in northern Israel. Not far from the Mishnaic cities of Teveria and Tzipory and also near the Kabbalist’s city of Tzefat, where many Spanish Jews fled to. Surrounded by many Sephardic Jews, some of whom were descendants of those who fled queen Isabella and Ferdinand’s persecution, I saw vibrant Jewish life alive and well on the sacred soil of the land of Israel. All around me were children playing, Torah classes, creativity, comradery, and music. Jews were studying the commentaries of the great sages of Spanish Jewry, such as the Rambam, Ramban, Don Isaac Abarbanel, Rabbi Yosef Karo, and so many more. I found myself celebrating the ancient holiday of Passover, with so many other free and happy fellow Jews, on a beautiful Kibbutz in the holy land of Israel.

Thinking of this historical impossibility, wondering how it did become possible, I was reminded of two almost identical passages in the Haggadah, without each of whom we would never be here today.

On the Seder night, we sing the famous words of Vehi She’amda and say Sh’bechol dor va’dor:

While this reference of bechol dor va’dor, for in every generation, is a sad reality acknowledging the persistent existential threat of antisemitism, it also recognizes God’s perpetual commitment to rescue the Jewish people. If you wish, this bechol dor va’dor is the existential one, speaking of the eternal promise that despite it seeming so at times, the Jewish people will not go extinct. Despite all threats to our being, we will not be decimated.

In every generation, a person is obligated to regard himself as if he had come out of Egypt, as it is said: “You shall tell your child on that day, it is because of this that Hashem did for me when I left Egypt.”

While the first bechol dor va’dor was speaking of God’s role in preserving the Jewish people, the second bechol dor va’dor speaks of our mandated role in the conservation of the Jewish people. If we want to remain a free people, if we would like to make sure we do not vanish, we must make sure we see ourselves as those same people who left Egypt — led by God. Not only do we have an obligation to relieve the Exodus from Egypt, but we must see it in the context of education. The very obligation to see ourselves as if we were selves freed from the atrocities of Egypt must also be exercised in the context of educating future generations as proud and knowledgeable Jews.

The combination of the two bechol dor va’dors — one safeguarding our physical existence while the other guaranteeing our spiritual existence, allows for us to see the descendants of a once decimated community in Spain, replanted and revived on the land of Israel.

Rabbi Zalman Melamed, former Chief Rabbi of Beit El, explains why we sing Ve’hi She’amda with joy when we are talking about the tragic fact that in every generation, there are those who seek to destroy us. Being Jewish, Rabbi Melamed explains, means thinking differently and challenging the thinking of those around us; this has been true since the days of Abraham, who was the world’s first monotheist against what everyone in the world thought. Thus, it is natural to assume there will always be those who seek to destroy us as we are those who always make sure to think differently and challenge the status quo. Yet, to this, we must add the second bechol dor va’dor,  the guarantee that we do our part in making sure that our commitment to education and remembering Yetziat Mitzrayim — the Exodus from Egypt — as if we were there.

Walking the paths of Kibbutz Lavi breathing the breeze of the Galilee, I was able to look on the beautiful mountains of the Golan Heights, see bright sunshine reflect on a deep blue Kinneret, and see the red, yellow, white, purple, and pink spring flowers smiling from among the beautiful greenery. I was able to walk on the same ground that Rabbi Akiva, Nitai Ha’Abeli, and Rabbi Gamaliel of the Haggadah once walked on — just now with no fear of the Romans. Celebrating Passover with many Sephardic Jews, celebrating the glorious accomplishments of Medieval Spanish Jewry, I was reminded of all the generations who made sure they lived their bechol dor va’dor, and of God’s kindness that made sure we were now able to do the same.