Nine in the morning arrived and I walked into the Crowne Plaza Hotel’s dining hall to meet the legendary singer, actor, and pro-Israel activist, Pat Boone to discuss a possible production of a movie based on my Father’s heroic deeds in the Battles for Jerusalem, my family’s Zionist history and the events in 1948 leading to the establishment of the modern State of Israel. What was to be a 15-minute meeting turned into two hours of profound discussion concerning Torah, the Jewish People, Zionism, morals, and the quest for Truth.

Months earlier I had befriended Tomer D. Tamarkin, (Tom as Pat Boone calls him) the GM, and founder of EnergyCite. A man of vision and great purpose, Tomer seeks to unleash and provide fusion energy to Israel and the world so as to enable humanity to have safe, clean, and unlimited energy. In our many conversations, Tomer came to learn of my filmmaking experience as a writer and director and my hope to make a feature-length epic action movie based on my Father and his involvement in the birth of Israel. And so, he was extremely generous to introduce me to his business partner, Pat Boone.

As we walked around the dining hall with plates in hand picking our breakfast choices I was struck by Mr. Boone’s great humility. Above in the lobby of the hotel stood the billboard signs announcing his upcoming concert at Israel’s 70th Anniversary Gala For Krembo Wings’ Children to take place on May 13, 2018, at 8:30 PM at the Henry Crown Symphony Hall. Yet, here in the dining hall, Mr. Boone had no entourage. He was serving himself. This immediately impressed me. A man of great talent and success with more than 45 million records, 38 top-40 hits,  appearing in more than 12 Hollywood films, and who held the Billboard record for 220 consecutive weeks on the charts with one or more songs each week was getting his own breakfast without fanfare.

As we sat down and began to drink our coffee our mutual love for truth and man’s purpose on Earth turned our attention from the topic of the meeting to the topic of Life itself. Or as Mr. Boone once said to a very sick man who miraculously was healed nearly fifty years ago, “Did G-d get your attention yet?”

And to me, this is the essence of Pat Boone’s outlook on life. During our conversation, I realized I was bearing witness to an extraordinary human being. All of us struggle with daily trials, tribulations, and temptations. Most of us fall. And many of us get up to fight another day. But how many of us are blessed like Mr. Boone with extraordinary gifts such as great talent, charm, charisma, good looks, and profound success? Not many. And most that have achieved such heights quickly fall into temptation and are forever lost in ego and the pleasures of an abnormal ego seeking another form of recognition either through excessive materialism or pleasure hunting.

Yet here I met a man who had been friends with a host of so many great and famous celebrities who had troubled lives, and yet he is still married and deeply in love with his beloved wife, Shirley for nearly 65 years. What is the secret of Mr. Boone’s extraordinary moral strength? From our conversation, I learned the secret lies in his great love and respect for his Parents, his intellectual honesty, and his utter and complete awe of the Creator of Heaven and Earth, G-d.

When he referred to his parents in our conversation one could hear not the voice of an 84-year-old man, but rather of a young son who wants to bring his parents only happiness and pride. When he spoke of religion he stressed the fact that one must be honest and admit that the New Testament was written by Jews, and so, one has to acknowledge the profound influence Jewish thought and morals has had on the peoples of the Earth. His position is a very courageous one since many in Christianity’s history have tried to deny the Judaism within it. And when he mentioned G-d, one can easily see he seeks to be a servant of G-d. These three elements: love and respect for one’s Parents, intellectual honesty in the face of controversy, and his inner drive to always show his gratitude to G-d has produced the inner strength that has made Pat Boone a true role model for all and the signpost of moral strength in a world of temptations, lies, and vanities. 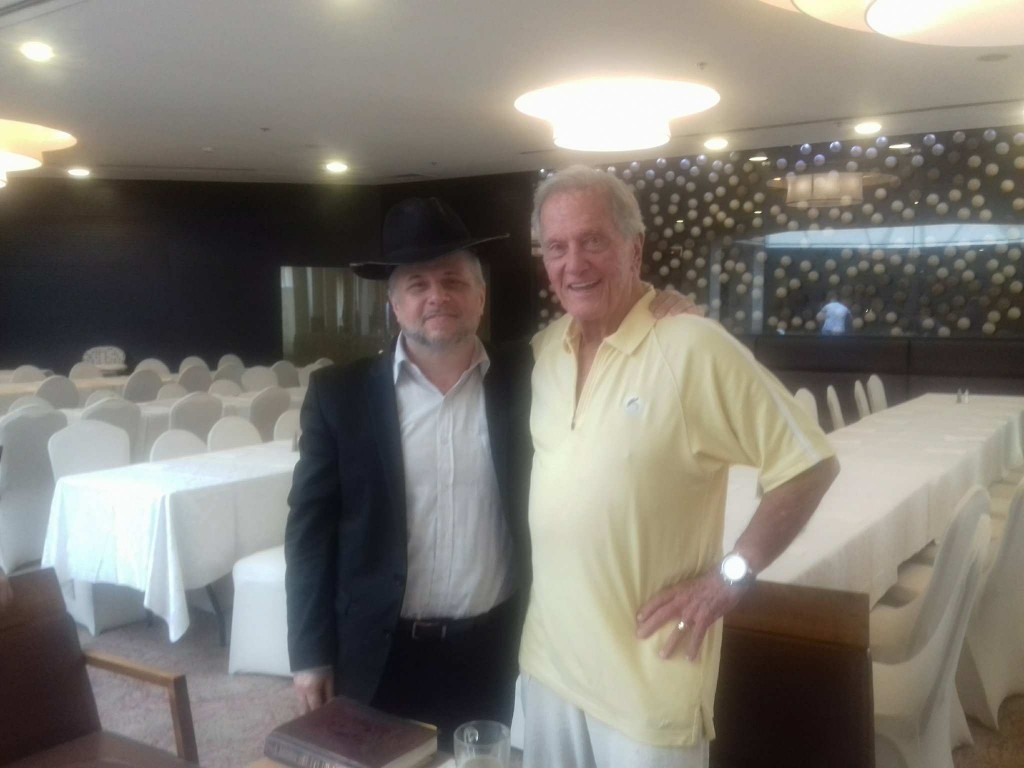 Thank you, Mr. Boone, for providing the youth of day and the future a great role model!