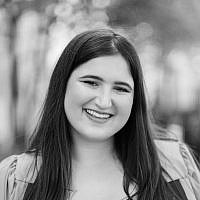 The Blogs
Elizabeth Karpen
Apply for a Blog
Advertisement
Please note that the posts on The Blogs are contributed by third parties. The opinions, facts and any media content in them are presented solely by the authors, and neither The Times of Israel nor its partners assume any responsibility for them. Please contact us in case of abuse. In case of abuse,
Report this post. 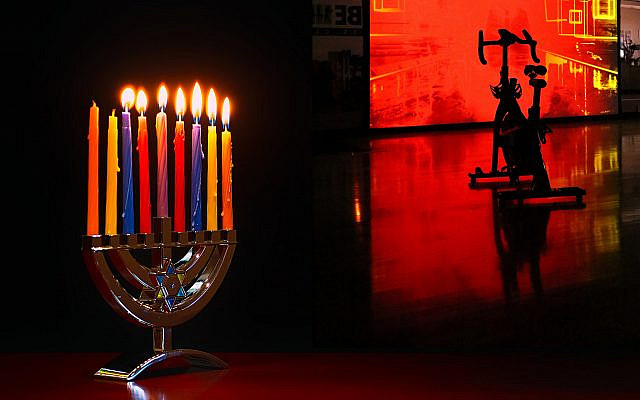 A lit Menorah next to a Peloton exercise bike (Robert Thiemann, Giorgio Trovato)

Like many other 20-somethings who bum off their mom’s building gym membership, I have generated a love-hate relationship with the Peloton.

Much to my glee, when I turned on the bike one afternoon, I noticed Peloton’s first two Hanukkah-themed rides. This was on the first day of the Festival of Lights, and during my yearly 48-hour period in which I feel the spirit of Judah Maccabee run through me and become determined that I’m going to Super Hanukkah my life à la Beverly Goldberg, so it was everything I needed. Immediately, I hopped on the saddle and began the 20-minute Hanukkah ride and was greeted by the ever-positive Bradley Rose leading me through the class.

The playlist was made up of secular songs relating to Hanukkah themes, with the exception of “Hanukkah Blessings” by the Barenaked Ladies, which kicked off the ride. I enjoyed spinning to “Eternal Flame” by The Bangles and “Fight Song” by Rachel Platten which kept the energy high but also still felt very Hanukkahish. I was a bit disappointed that the dozens of Christmas classes contained specifically Christmas songs and the Hanukkah rides didn’t have specific Hanukkah songs. Riding to Leslie Odom Jr.’s “Ma’oz Tzur” would have been life-changing.

While it was pretty evident that the instructor was given a bunch of Hanukkah buzzwords to stick in, all that seemed to matter was that I was able to celebrate Hanukkah while Pelotoning with over 100 people around the world taking the class at the same time I did. Nothing was better than hearing Bradley chime “Who doesn’t love a good hardcore Hanukkah climb?” However, it soon hit me that there was something that between the motivational speeches about pushing yourself, there was something that Bradley wasn’t saying.

Early on in the ride, Bradley discusses the importance of representation in Peloton producing a Hanukkah ride, yet the word “Jewish” was not mentioned. Instead, he would repeatedly say “this community” to describe those who celebrate Hanukkah.

“I am honored to be given a chance to create such a special class for such an important part of the Peloton community,” he says. While this felt bizarre to me, I brushed it off. Undoubtedly there are people of all religions who celebrate Hanukkah, and this could be a good use of inclusive language.

However, around halfway through the class, Bradley discusses standing together against hatred — for those of you who don’t Peloton, most classes include at least one inspirational speech. Once again, there was no mention of Judaism, nor was the word “antisemitism” used in a time of increased hate crimes and attacks against Jewish people.

“If you’re wondering why I thought it was important we did this class, let me tell you. Personally, right now, I think it is more than ever that we need to stand shoulder-by-shoulder. I’m an ally for this community — for everyone on Peloton,” he says. “I think it’s time for a little more tolerance — we show it. A little more love, a little more care to everyone’s individual beliefs and rights. It’s never been more important than right now to come together.”

When one wants to call out hatred, one must call out hatred by name. One cannot discuss a need for tolerance in a Hanukkah class while erasing the fact that the surge in discrimination and hatred is toward Jewish people.

Peloton’s Hanukkah class was a good step in creating something Jewish that Peloton users can call their own this holiday season. However, in this first step in allyship, I believe there could — and should be more.

I can’t expect much from an exercise bike company, but for one that created a brand centered around loving one another, it was disappointing for Jewishness to be wiped out of the class. Bradley, who truly does his best to create an inviting Hanukkah vibe, urges riders to “stand by my side because I stand by you.” But the sentiments feel cold, if not false.

Even if Peloton wanted to keep the Hanukkah ride as secular as it could, by repeatedly saying phrases like, “Let me extend my Hanukkah blessings to all the community out there,” the class inadvertently doesn’t feel like it is talking to the Jewish people — or even to the broader “to those who celebrate.” “The community” lacks the intimacy of even speaking to the rider, so it begs the question of whether it speaks to anyone.

Peloton toes the line of overt Jewishness, of tackling the issues head-on, but fails to address its core audience by playing it safe, making it just as sterile and corporate as the company’s Christmas rides — and perhaps that was the point.