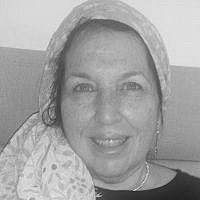 The Blogs
Deena Garber
Apply for a Blog
Please note that the posts on The Blogs are contributed by third parties. The opinions, facts and any media content in them are presented solely by the authors, and neither The Times of Israel nor its partners assume any responsibility for them. Please contact us in case of abuse. In case of abuse,
Report this post.

In Vayetzei, Jacob leaves his parental home with two goals, to escape from Esau’s rage and to find a suitable wife in Haran, birthplace of his mother. He ventures into the unknown to his first experience of separation and exile. On his way to Haran night falls. Jacob, terrified and alone, falls asleep and dreams.

In Vayetzei, Jacob’s response to the first dream is to awaken suddenly and realize that he has unknowingly been in a holy place. Anochi Lo Yadati, “I did  not know.” The jarring knowledge of his unaware state and fear that he missed Gd’s presence disturbs him greatly.

In the morning, he establishes a monument on which he offers a libation of oil and vows that  if Gd will indeed protect him and he will have the bare minimum in exile, bread and clothing, he will give a tithe. If  Gd will bring him back home, Jacob vows that he will be bound in relation to Him and Gd will be his own Gd. Malbim explains this as a vow of commitment and reciprocity.

This is the first of Jacob’s three dreams reported in Bereishit, all occurring on the boundary between exile and home. In the second, also in Vayetzei, (Bereishit 31, v.11 -14), Gd announces that the time to return home has come. In the the third, (Bereishit 46, v 2-5), Gd appears to Jacob and tells him not to fear leaving Eretz Yisrael for Egypt  with his entire extended family, promising, “I will go down with you and I will bring you up.” Jacob is told that his descendants will become a great nation and he will be buried in Eretz Yisrael.

Jacob becomes a dreamer and the dreams and boundaries between sleep, dream and awakening are key elements as Jacob emerges through these journeys from his original sheltered individual state to become the “choicest of the Patriarchs,” central figure in the development of the Jewish people and, on the symbolic level, central archetype of the Jewish experience.

Encountering the world of dreams  is to enter into the world of ambiguity, contradiction and paradox. Complexities of state knowing co-exist with not knowing, hiding coexists with revealing. The trivial exists with the significant.  To enter this world is to enter a world of intensity and some estrangement from normal waking life.  In the past 150 years of modern psychology, new approaches have developed some of which echo midrashic modes of interpretation. Freud emphasized the personal, individual nature of the dream. The dreamwork disguises unconscious conflict and trauma to prevent undesired knowledge from reaching conciousness. The dream is a compromise between the repressed and what pushes through the barrier to form dream images. Jung saw collective and even universal, archetypal motifs that hint at future events or personal changes. Bion considered  a third way, namely that the dreamwork not only hides content but transmutes raw experiences and trauma, but filters and processes them to promote expansion of depth and integration in the person. This includes encounters with the infinite, which could be awesome or sublime. The dreamwork, when continued even into waking states, brings vitality and a  new approach to encountering the world and meeting the unknown faced in the day.

Interestingly, the Maggid of Mezeritch also understood that dreaming brings the dreamer to strip off the inessentials of the everyday, and access deeper spiritual meaning and re-enter the waking world with new vitality experienced in the night encounter with the spiritual realm.

Jacob’s dreaming is a sign of prophecy, but also an expression of the dreamwork which enhances vitality and readiness for new relationships and capabilities in response to his dream at Beit El, as expressed in his vows on waking and in Haran in meeting with Rachel and Jacob’s behavior at the well.

Sefat Emet interprets  that the Torah is hidden and revealed and so too Gd and Israel, but in the interstices of the hidden and in exile there is always the Presence. When Jacob dreams that Gd promises to be with him and not abandon him in exile, this is interpreted as a promise not just for Jacob individually, but for the Jewish people in all times of darkness when facing the unknown and the final dream of going to Egyptian exile  is midrashically associated with the verse in Tehillim 91: “I am with him in distress,” that Gd will neither abandon Jacob  nor his descendants. Gd promises as He does in the first dream of Vayetzei that He will guard and protect in all times even in times of apparent darkness until the Redemption.

Sefat Emet interprets as “The inner vitality of Israel is always cleaving to Gd but hidden in the Exile.”

Sefat Emet extends Jacob’s fear of abandonment in exile and  the desire for closeness with Gd to explain these passages  using ideas from Midrash and Zohar on Song of Songs where the lovers’  alternate yearning, distance and closeness is  a metaphor for the Exile and final Redemption.