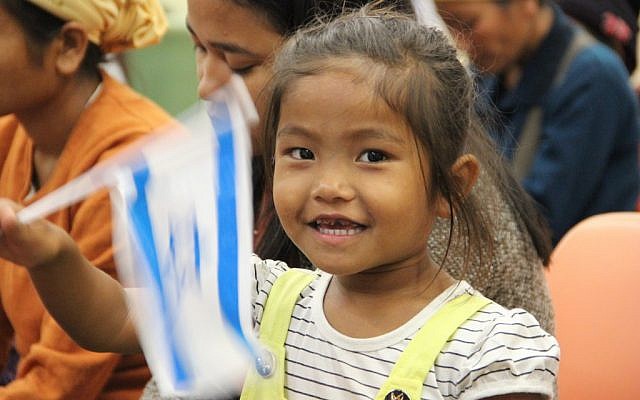 A girl of the Bnei Menashe arrives at Ben Gurion airport. (Laura Ben-David)

“Aliyah” is one of those words that has no translation in any other language. Probably because there has never been a concept quite like it.

“Aliyah,” which literally means “ascent,” is the immigration of Jews from the diaspora to the land of Israel. “Making aliyah” is one of the basic tenets, and ultimate fulfillment, of Zionism.

While there has been aliyah taking place throughout the millennia of Jewish dispersion in the diaspora, there has never been a veritable “ingathering of the exiles” from the four corners of the earth like in the past hundred-or-so years since the advent of the Zionist movement in the late 1800s.

The result of this has been a cultural melting pot of Jews of every stripe and color converging on Israel. 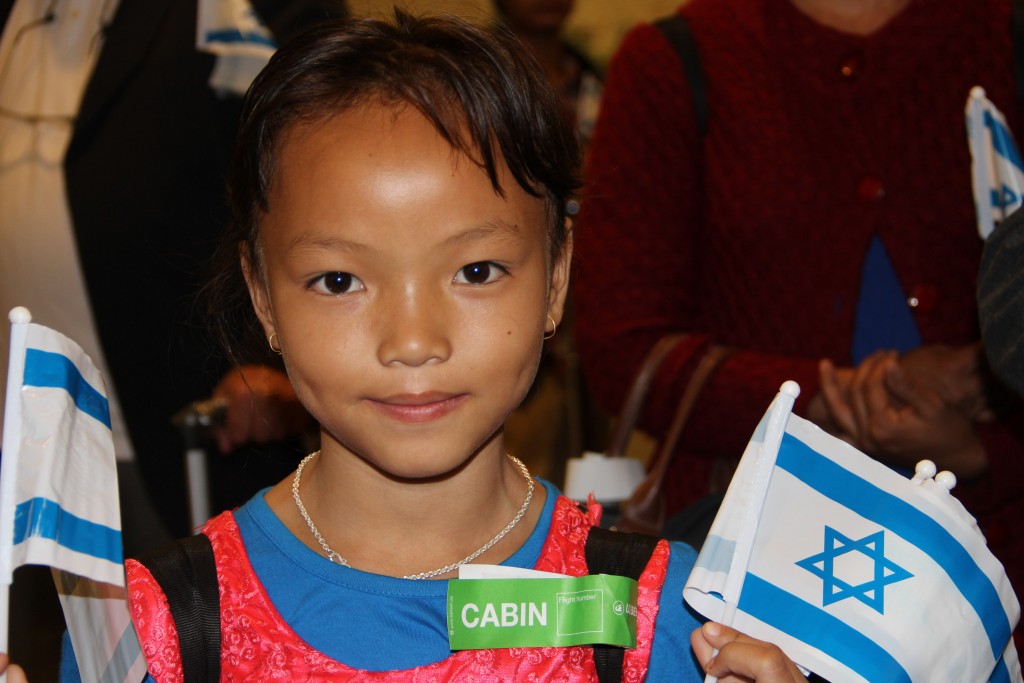 One such group are the Bnei Menashe, a fascinating group who claim descent of the Lost Tribe of Menashe. Numbering around 10,000, nearly a third have already made it to Israel while the remaining 7,000 are in northeast India where they await their turn to make aliyah.

Just last week, 162 Bnei Menashe made the exhausting journey home with the help of Shavei Israel. (Full disclosure: this writer is the director of Marketing & New Media at Shavei Israel, but this article and the photography are my own.) Having had the immense privilege of escorting the group from the time they exited the plane and through their first hours in Israel, including emotional and heartfelt reunions, it only seemed fair to share this dose of true Zionist inspiration with all who wish to see it. 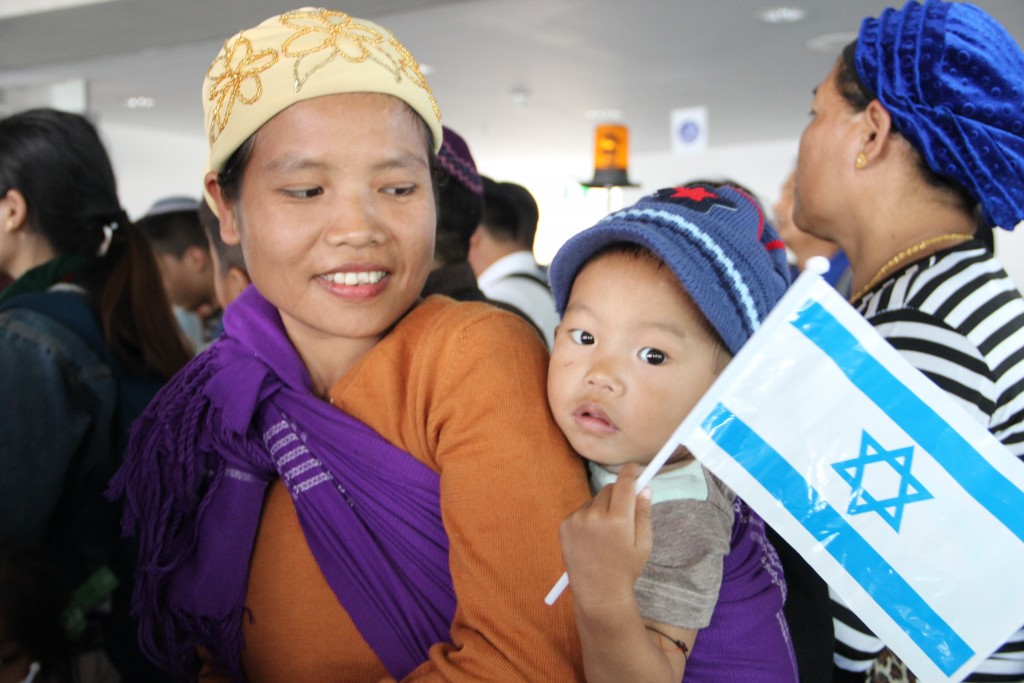 Bnei Menashe mom and baby upon exiting the airplane in Israel. (Laura Ben-David)

For the Bnei Menashe coming on aliyah, it is no small journey. No less than four flights, multiple bus rides, an overnight stay in New Delhi are all part of the exhausting process. And yet, tired as they are, they are exhilarated when they land; usually singing their way through the airport, flags waving. 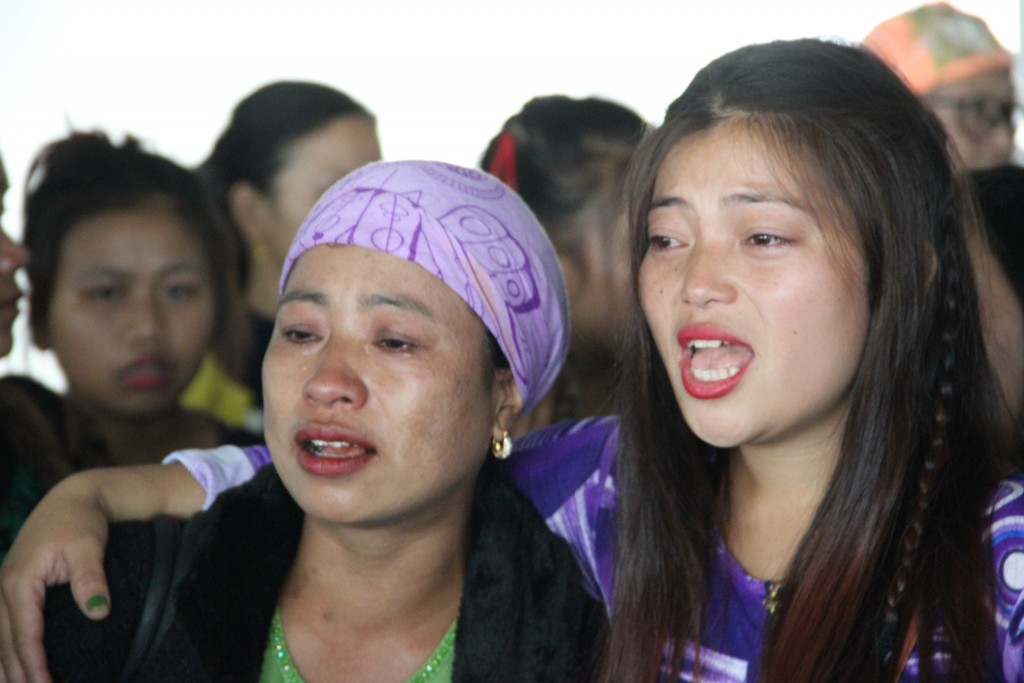 Tears of joy as Bnei Menashe women sing immediately upon their arrival in Israel. (Laura Ben-David) 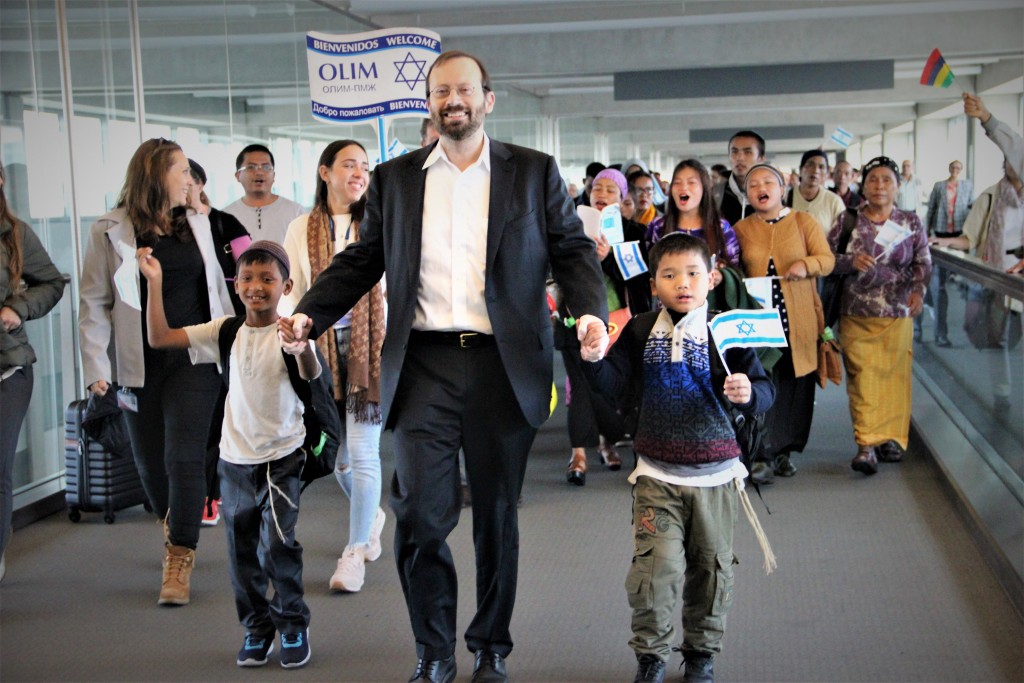 The immigrants comprise every age, from infants to the elderly. When possible, several generations from the same family make the move together. Unfortunately that usually is not the case and people leave many family members and loved ones behind. 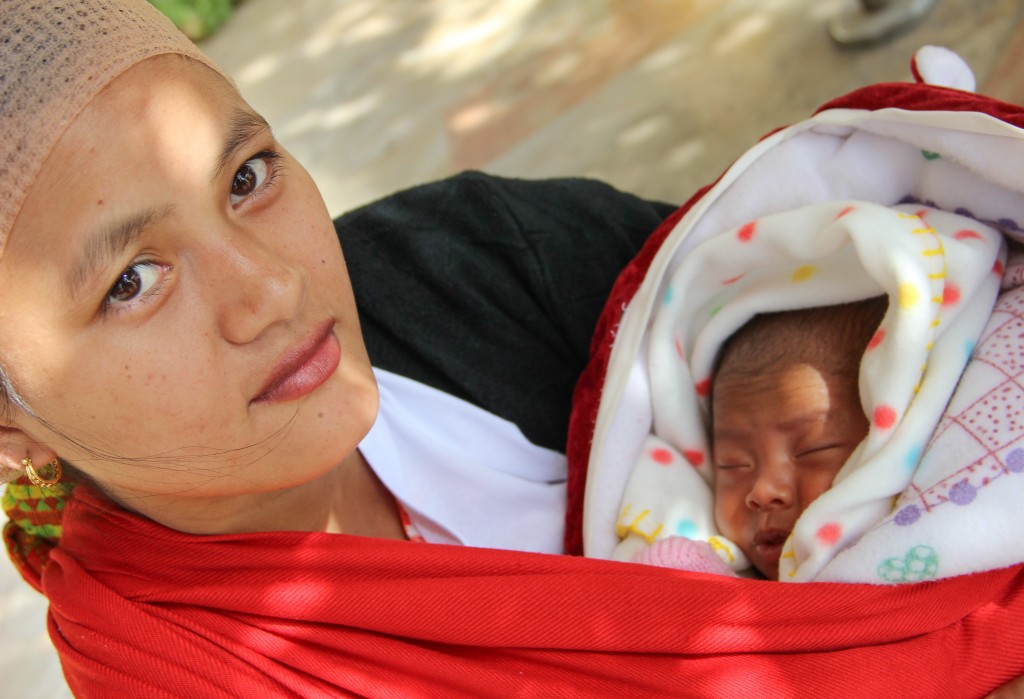 The youngest of the new immigrants, a baby girl born just six weeks before her aliyah flight. (Laura Ben-David) 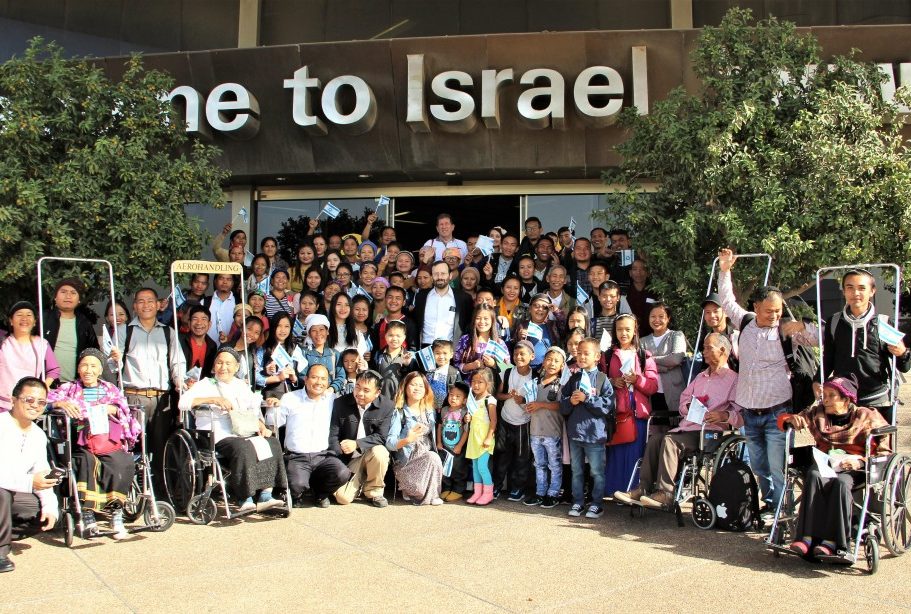 The group included several elderly people who were overjoyed to be living their dream. (Laura Ben-David) 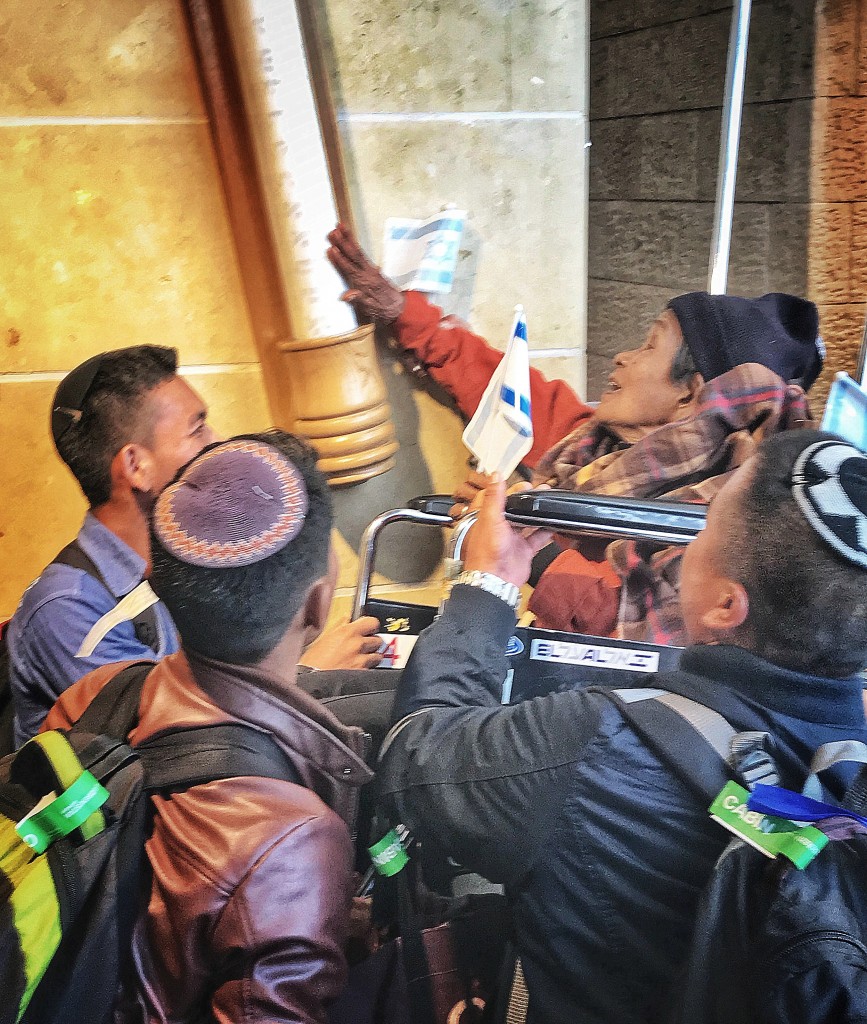 Beautiful moment as young men lift an elderly woman, wheelchair and all, to enable her to kiss the ‘mezuzah’ on her first opportunity in the holy land. (Laura Ben-David)

The children certainly have limited understanding of the enormity of the life-changing experience they just had, yet they all know they are in Israel, and are taught from the time they are babies of the importance of Israel and that it is their dream to live there one day. 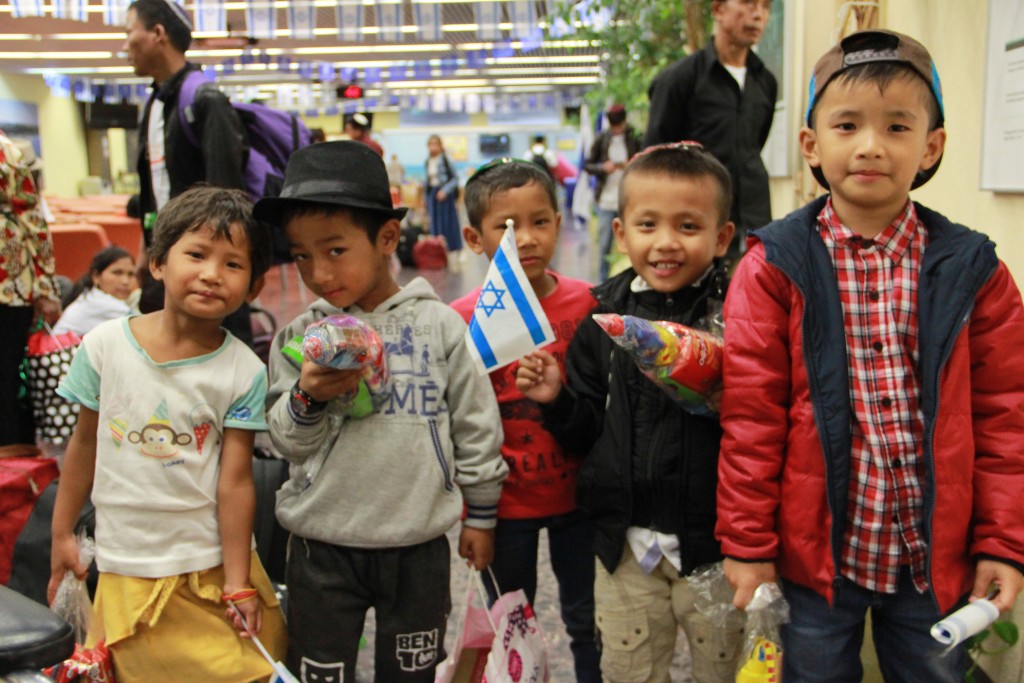 Some of the new immigrant children. (Laura Ben-David) 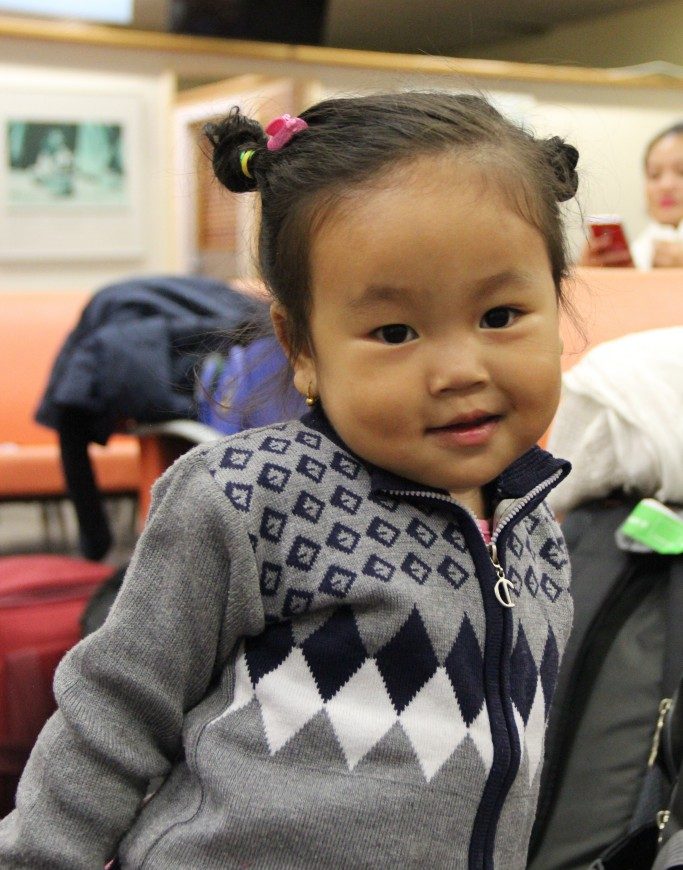 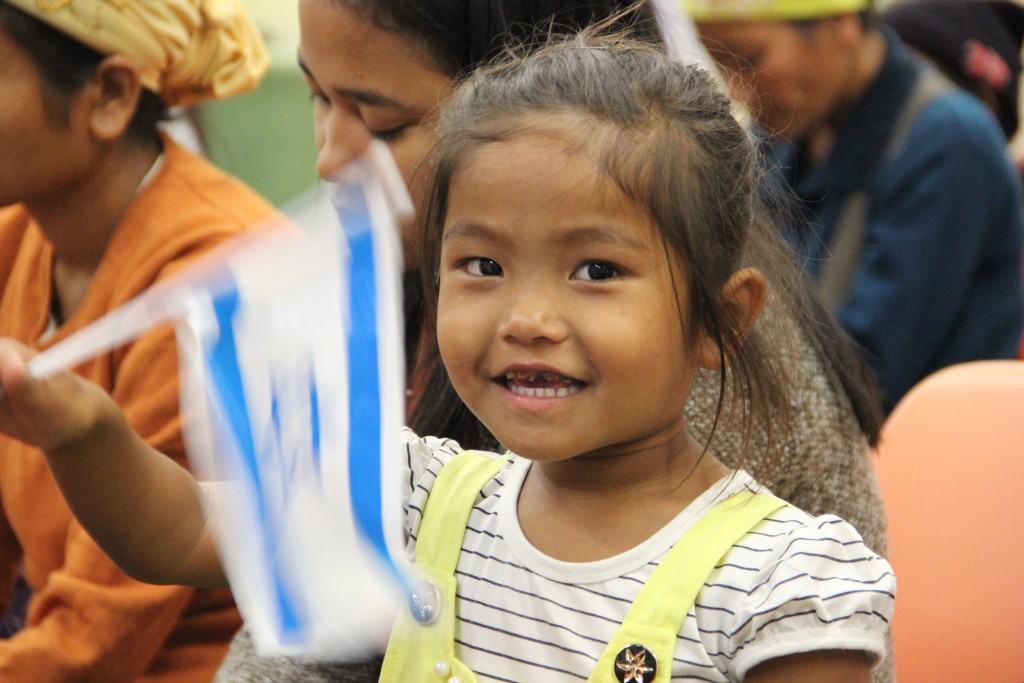 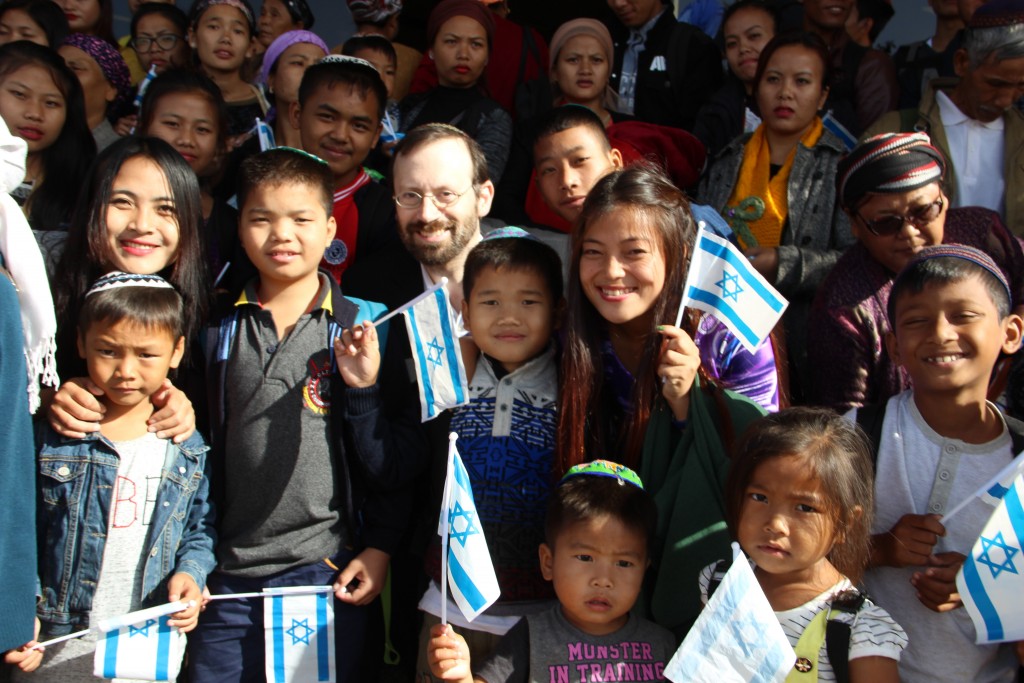 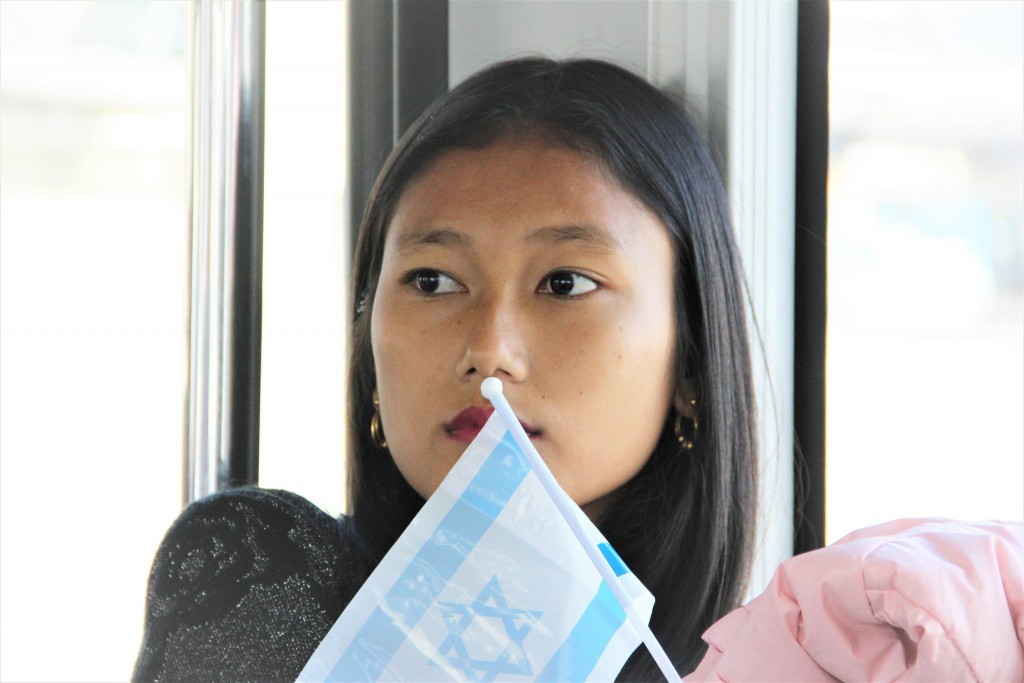 A young woman looks pensive as she takes everything in upon arrival. (Laura Ben-David)

The aliyah has captured the hearts of many in Israel and often government officials are in attendance. Minister of Interior Aryeh Deri was among the officials who participated, and appeared deeply moved by the experience. 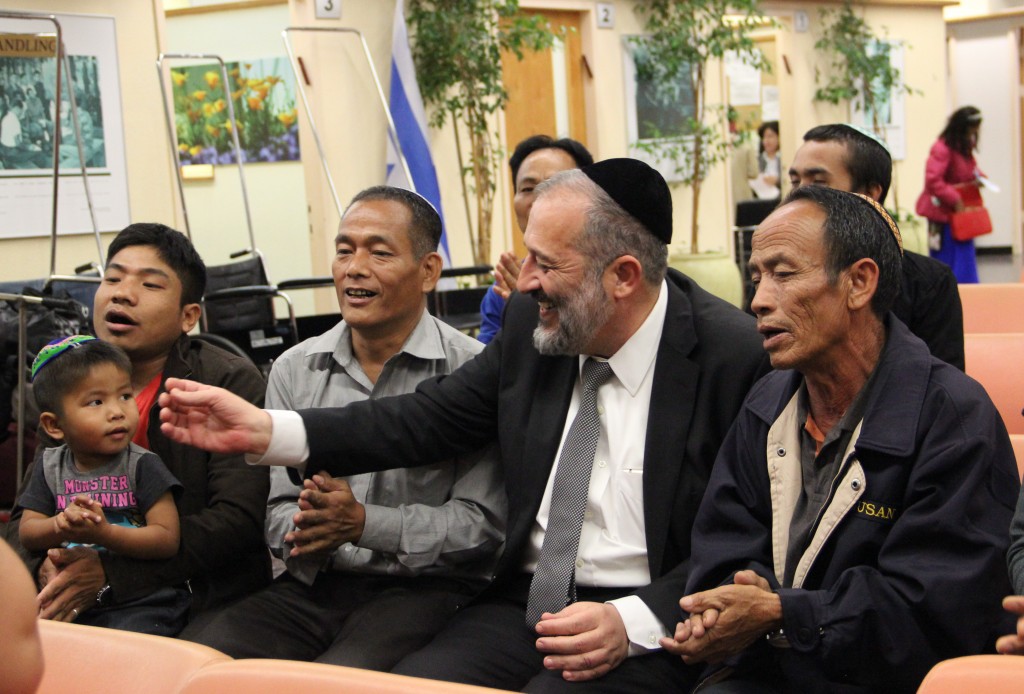 Once the processing was done behind the scenes, the jubilant Bnei Menashe emerged into the fresh, Israeli air seeming to be breathing in their joy. 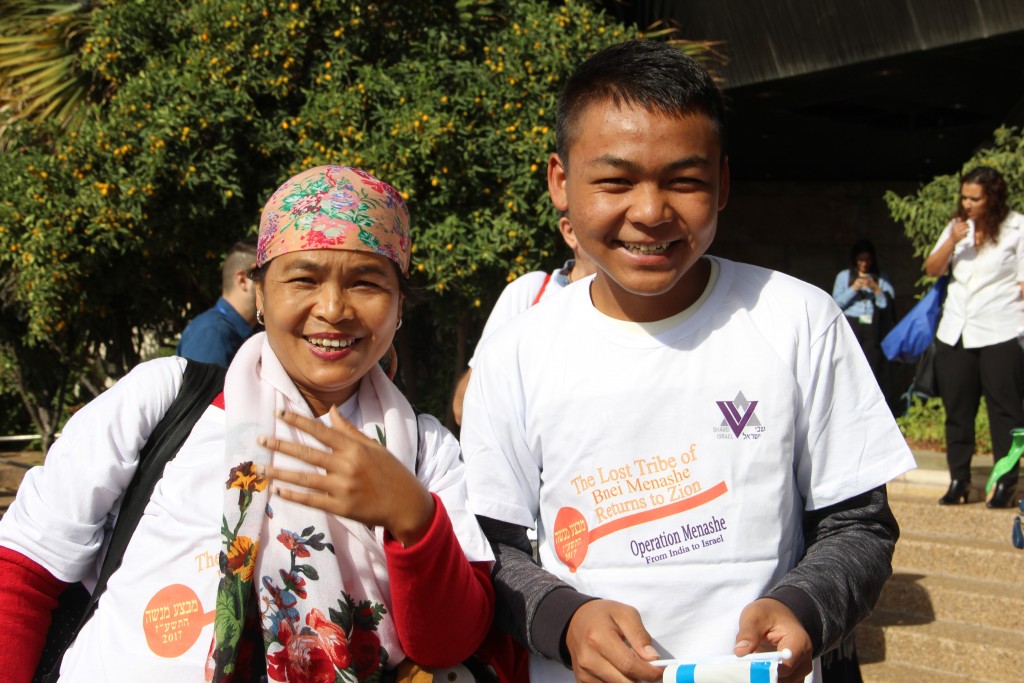 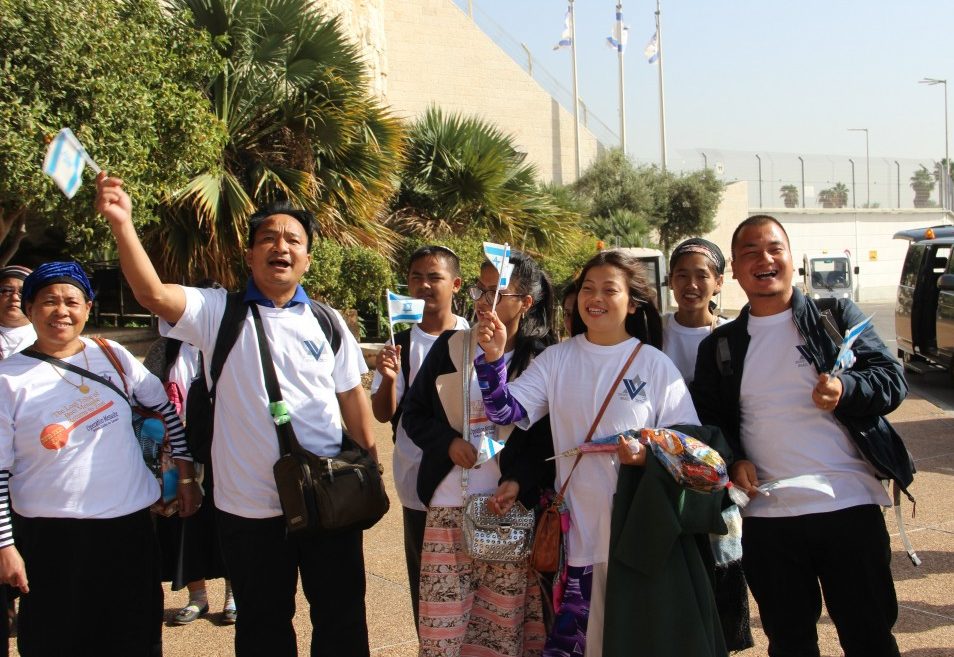 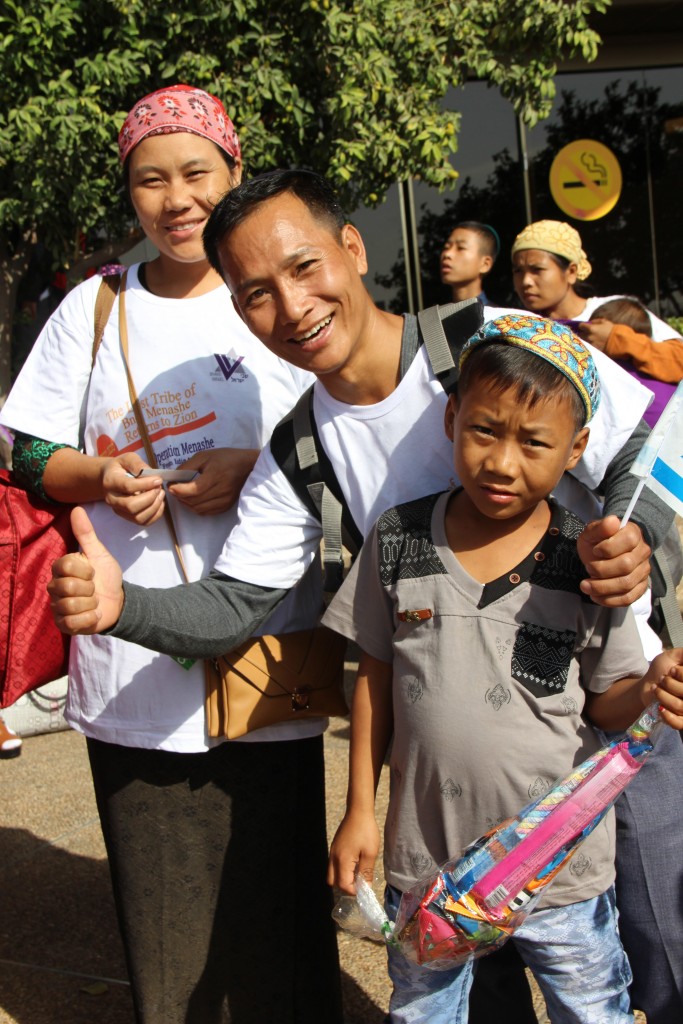 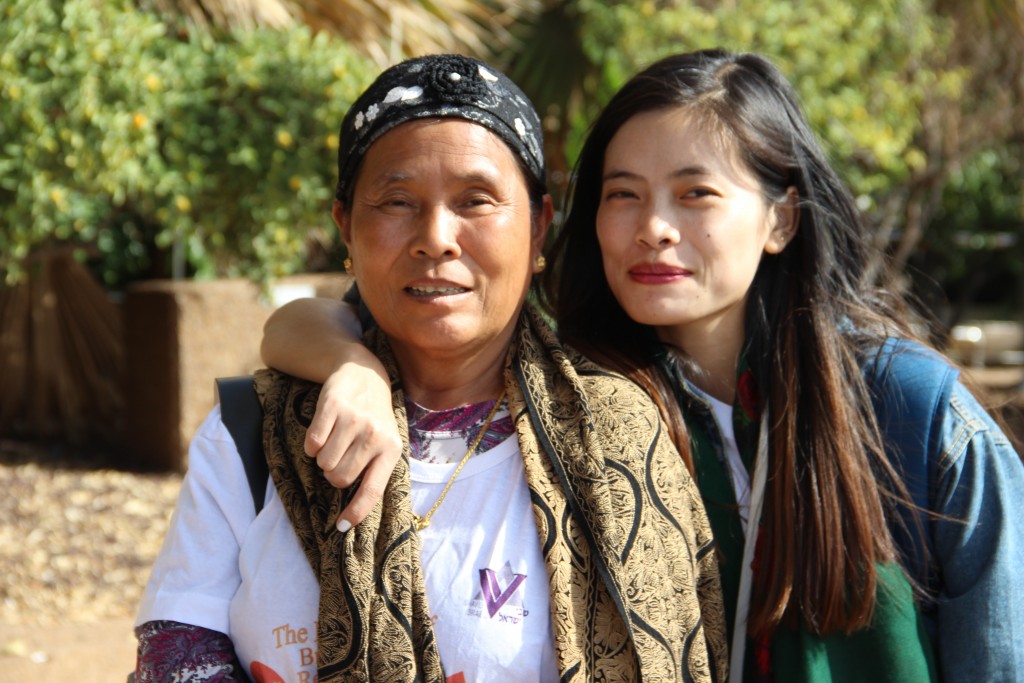 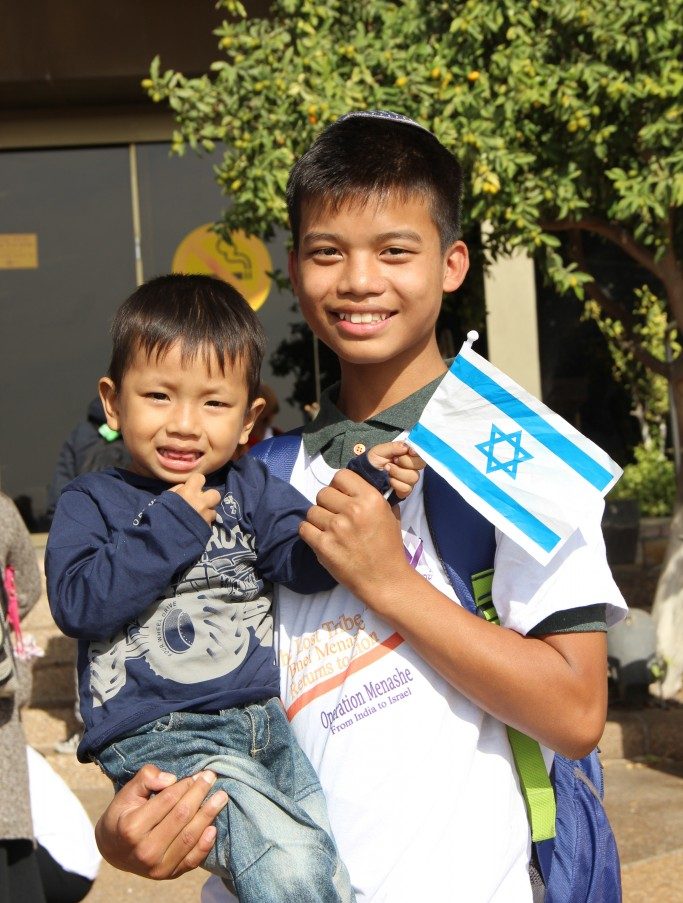 Many of the new immigrants were reunited with close friends and family members they had not seen in five, 10, 15, even 20 or more years. Seeing the reunions were enough to bring anyone to tears. 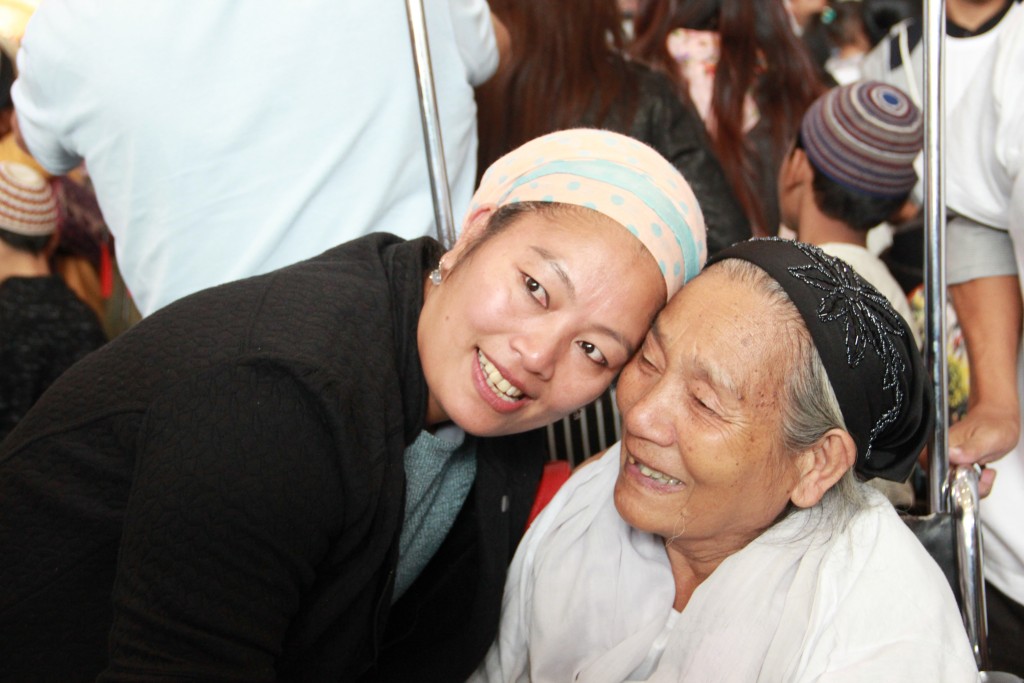 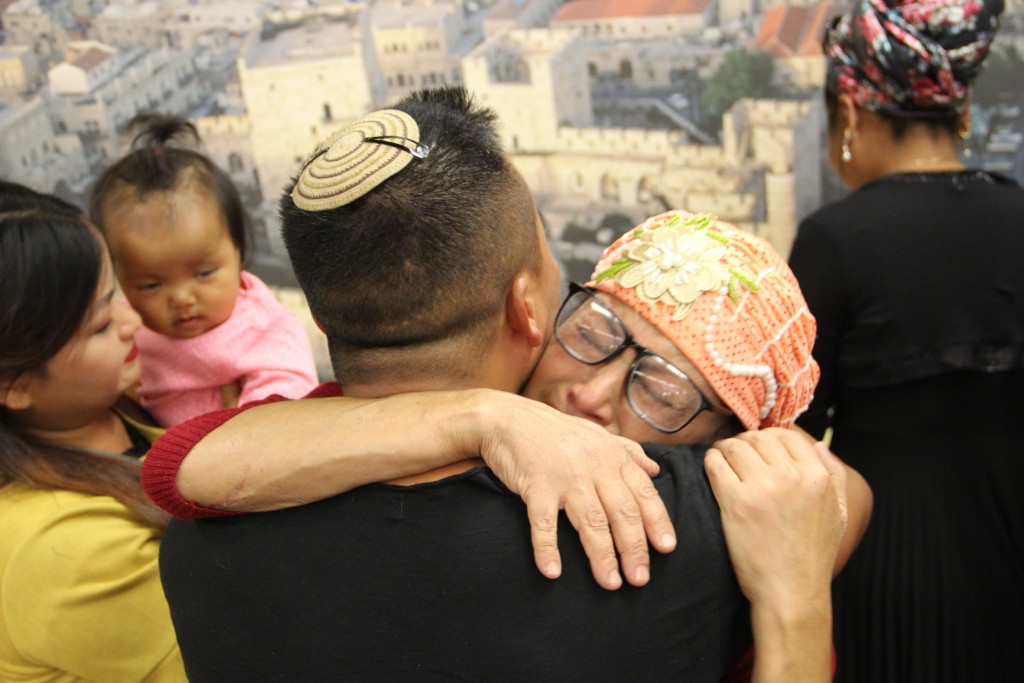 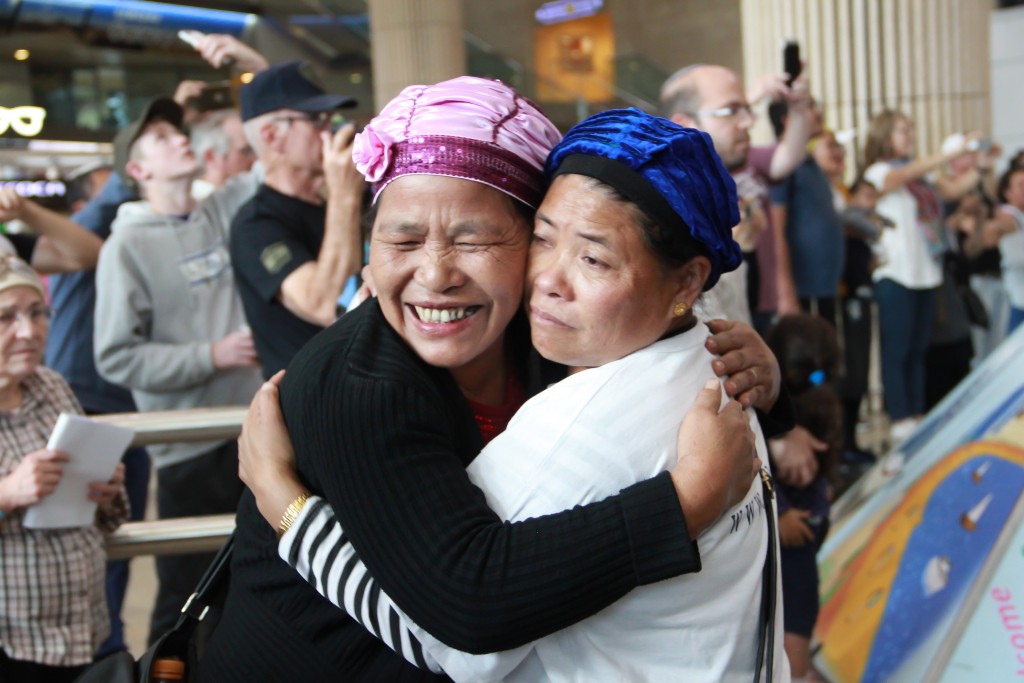 As one well-wisher said after greeting the new immigrants in the Arrivals hall, “I’m so glad I came! If anyone has even a momentary lapse in their Zionism, just come and greet an aliyah flight for a booster shot of love and true appreciation for Israel.”