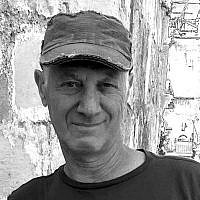 The Blogs
Chaim Bezalel
Apply for a Blog
Advertisement
Please note that the posts on The Blogs are contributed by third parties. The opinions, facts and any media content in them are presented solely by the authors, and neither The Times of Israel nor its partners assume any responsibility for them. Please contact us in case of abuse. In case of abuse,
Report this post. 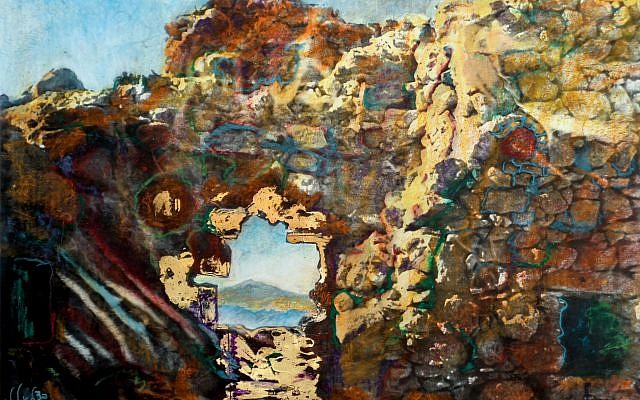 In the winter of 1990, a new oleh in the country for two-and-a-half years, I received a telephone call. “Chaim,” a woman’s voice spoke. Everything is personal in Israel, mostly on a first name basis. “Yes?” I answered, in Hebrew, of course, to which she replied, “You are drafted.” The Hebrew word for drafted being new to me, I asked, “Ma zeh? (What is this?”) She translated, and so I appeared the next month at the draft board in Jerusalem. I was 40 years old.

The Iron Curtain had not yet fallen, The Russian aliyah had not yet taken place, and a war in the Persian Gulf was brewing. When I reported for my basic training, the scuds were already flying. Our training included exercises for chemical attacks, but this was a war in which civilians were targeted, rather than soldiers in the field.

Basic training the world over trains the recruits not only physically, but psychologically. They are taught strict discipline. For example, a commander must be addressed as, “Yes, sir” or “Yes, miss,” as the case may be. In Hebrew, a gender-based language, it is mifaked or mifakedet, though in my postings over the next four years, the commander was simply addressed by first name. I remember how the trainees were required to count utensils after every meal in the mess hall. I thought this was standard procedure, but our trainers probably got a good laugh out of it.

All of this discipline inspired me to volunteer one day to accompany the water truck driver on his tour of all of the bases in an area that would take an entire day to cover. I always enjoy a road trip. As we drove through the countryside on both sides of what was then called “the green line,” or Israel and the territories, it was like seeing another civilization, both present and past: coffee shops and fruit stands, as well as fields with simple stone structures. When I returned home to Ashkelon I noticed more of these structures scattered in fields and in towns and cities. At the time, my wife and I were producing sets of greeting cards and I was travelling around the country as my own distributor. I began to carry a camera. I had been trained as a documentarian, majoring in film in college, and had always had the desire do a series on Israel.

My wife, Yonnah, is an artist, and early on we began a collaboration. At first, she would paint illuminated borders around my photographs. For example, we published a set of cards called “Wildflowers of Israel,” in which the borders took elements of the flower in the design. I was released from basic training the day the Gulf War ended, which happened on Purim. Still there were no tourists, so the card business suffered.

Instead of travelling around the country, I started going door to door with a portfolio in Barnea, an upscale neighborhood in Ashkelon. One day I had an idea to photocopy onto a piece of rice paper a photograph of the shuk with the khan in the background. The khan is a mosque built by the Mamluks in the 14th century. I gave the black and white image to Yonnah and asked if she could turn it into a painting while I took out the garbage. At the time, we were living in a fourth-floor walk-up apartment, so my request was challenging, but not unreasonable. Anyway, this early collaborative painting sold that very night. 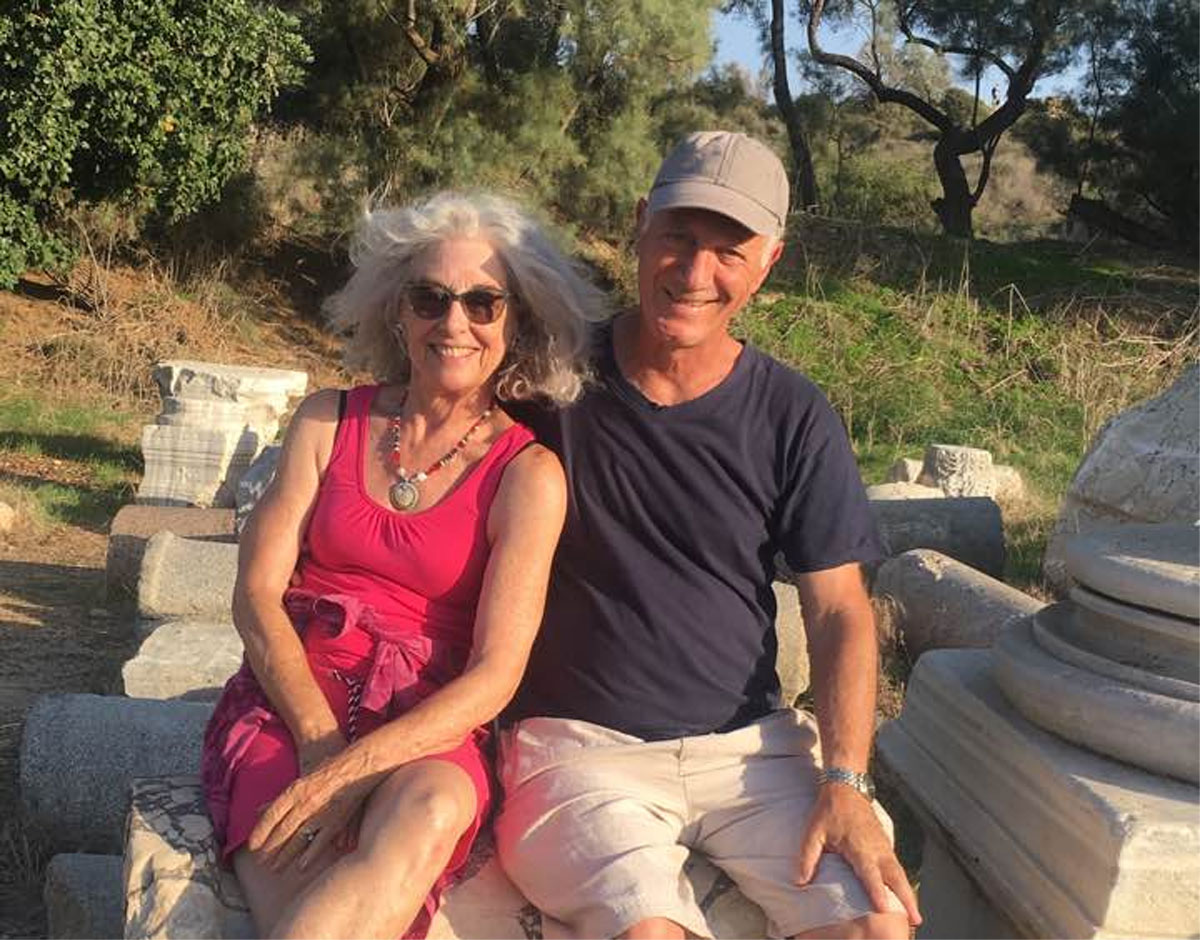 Yonnah and Chaim at the Ashkelon National Park.

Subsequently, I not only sold more paintings, but I made some friendships that have lasted until this day. Nothing like knocking on doors to meet people.

One of the people we met suggested that we visit Kibbutz Sde Yoav to meet a papermaker named Natan Kaaren. Natan has since moved to Italy where he lives in a stone compound in the mountains with his wife, Katarina, also a papermaker. We have visited them there. So, almost from the beginning we were using not only Japanese rice paper, but also handmade papers from Israel. We recently travelled to Zichron Yaacov and bought some large sheets from Timna, who runs Tut Neyar.

The series of paintings of architectural elements in Israel has turned into a 30 year project. Last year, we published a book, Touching on Place – Architectural Elements in Israel. We presented it at the New York Book Expo and also at the Jewish Book Council, which led to presentations in the US and Canada. Next month, we will be exhibiting both paintings and sculpture at the Museum of Classical Archaeology at Cambridge University. The exhibition will be titled “Ashkelon” and will be based on the rich history of this ancient and vibrant city. 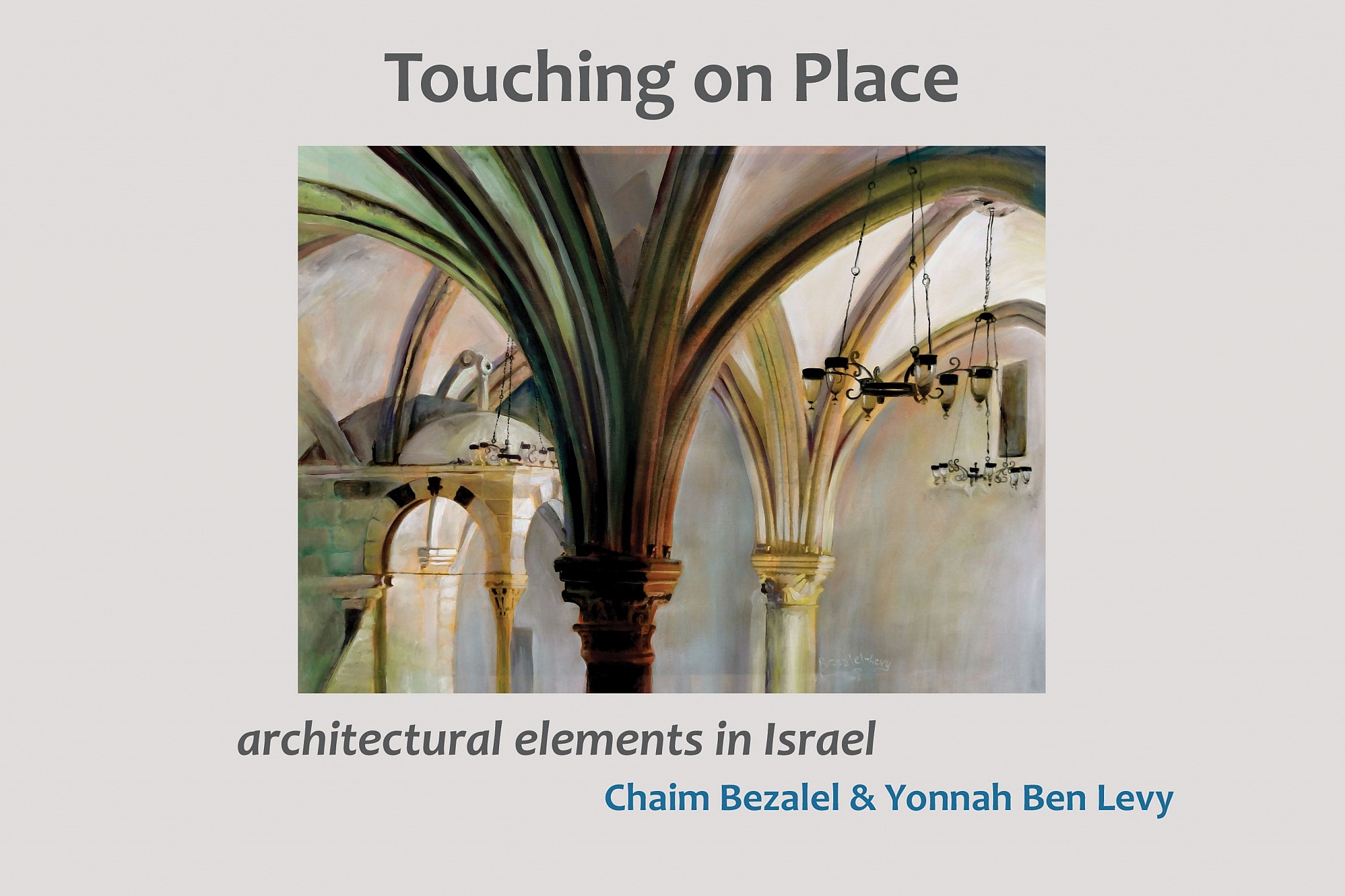 Touching on Place is published and distributed by Dekel Press.

All images provided courtesy of the author. 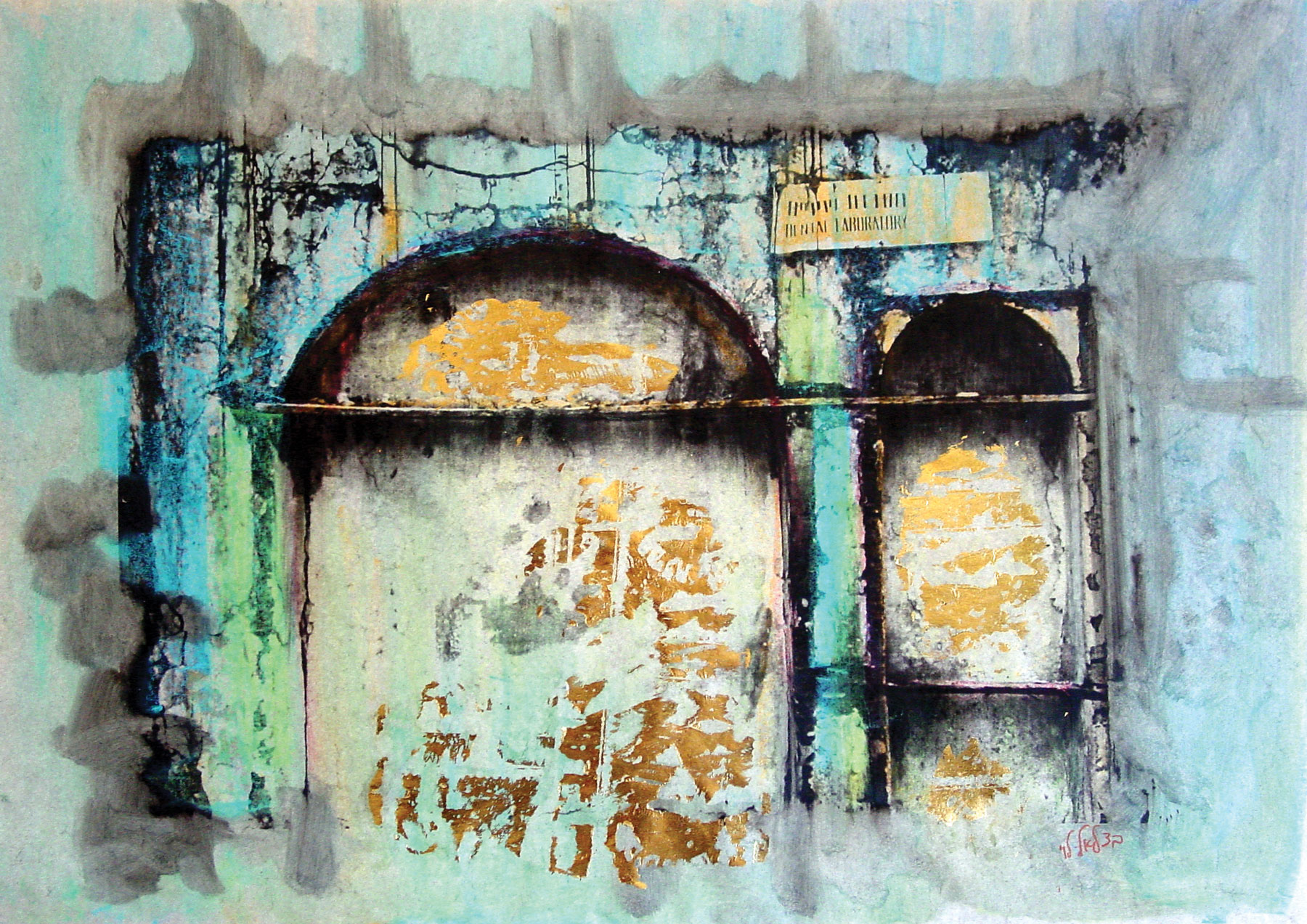 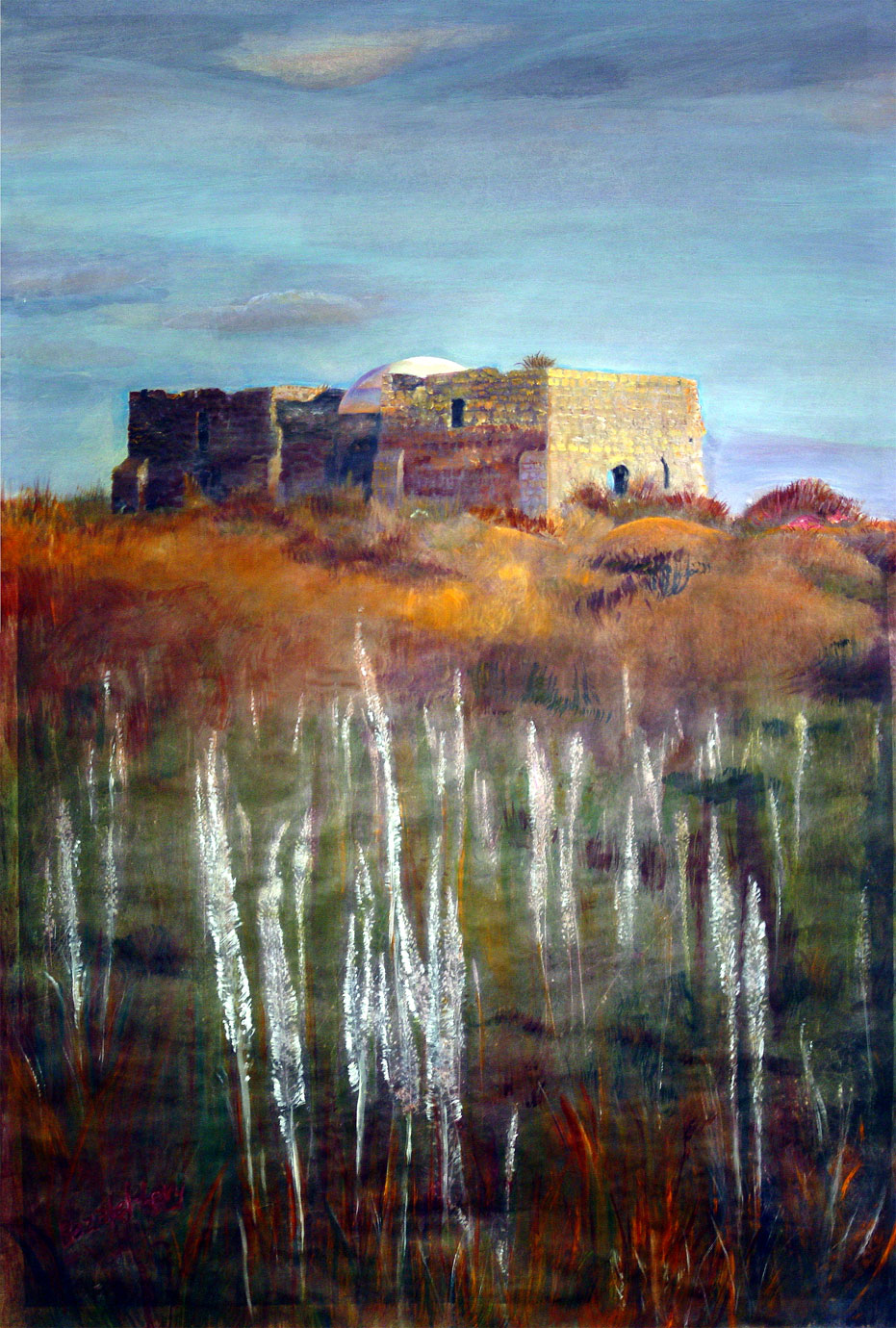 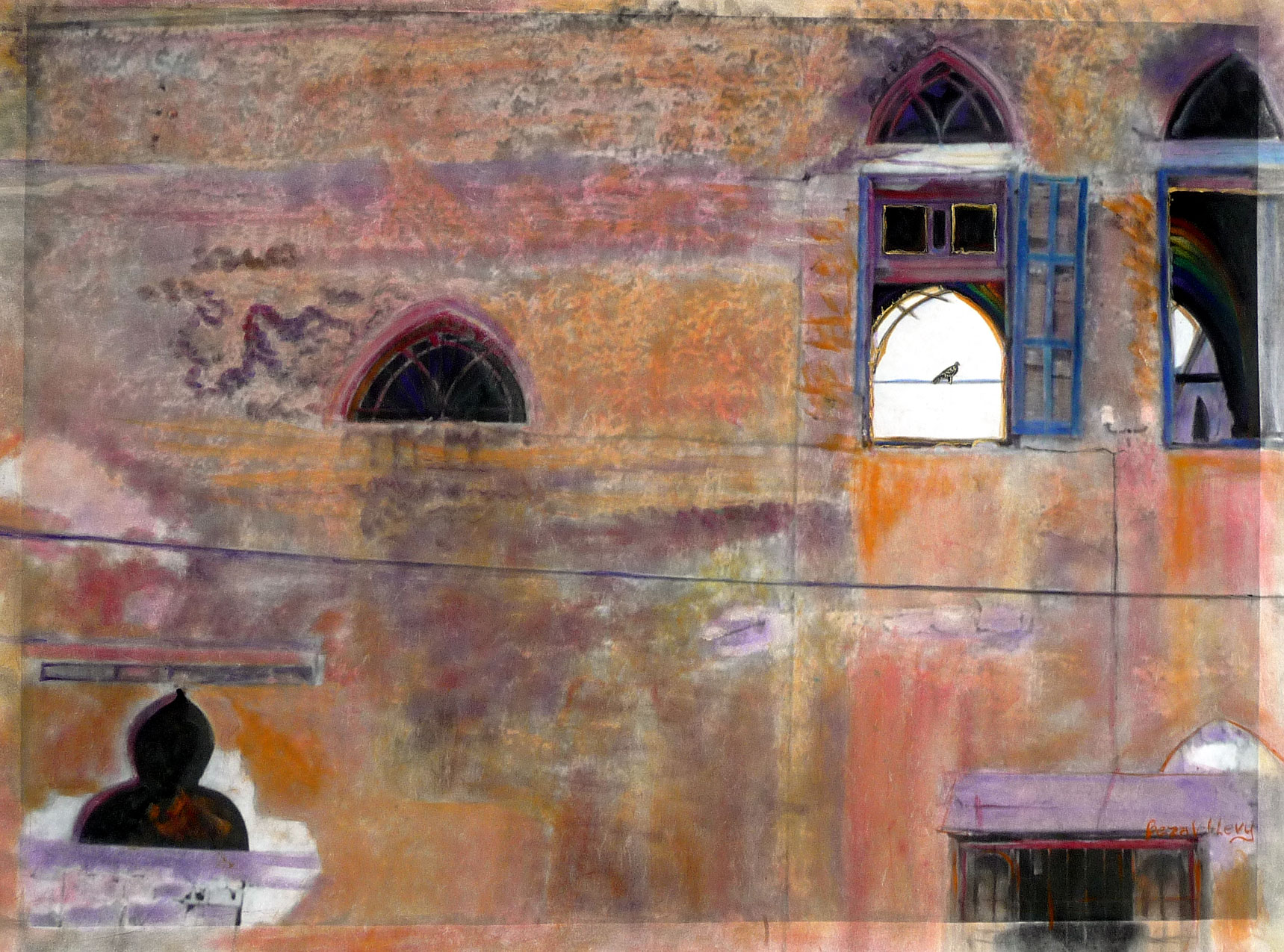 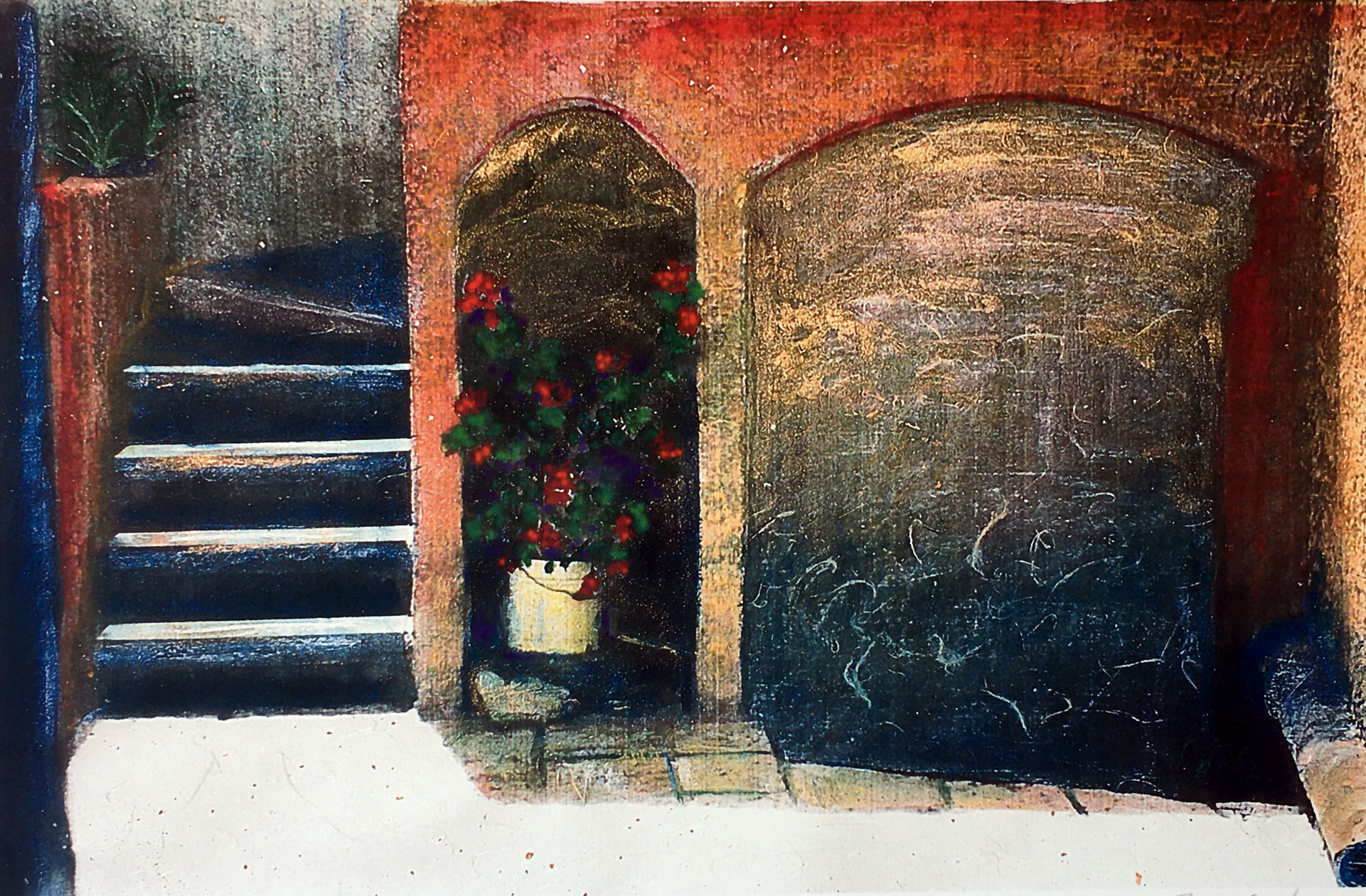 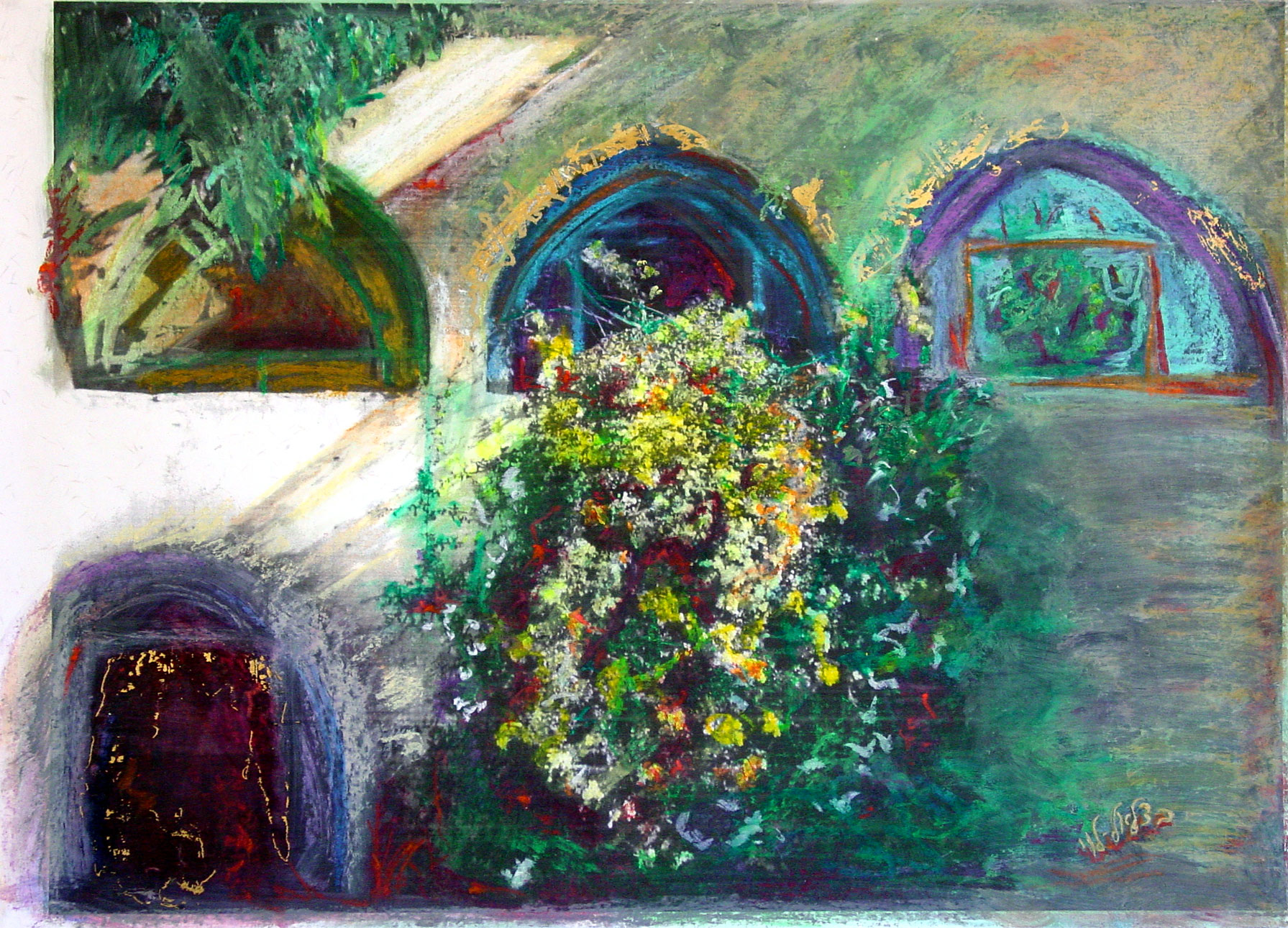 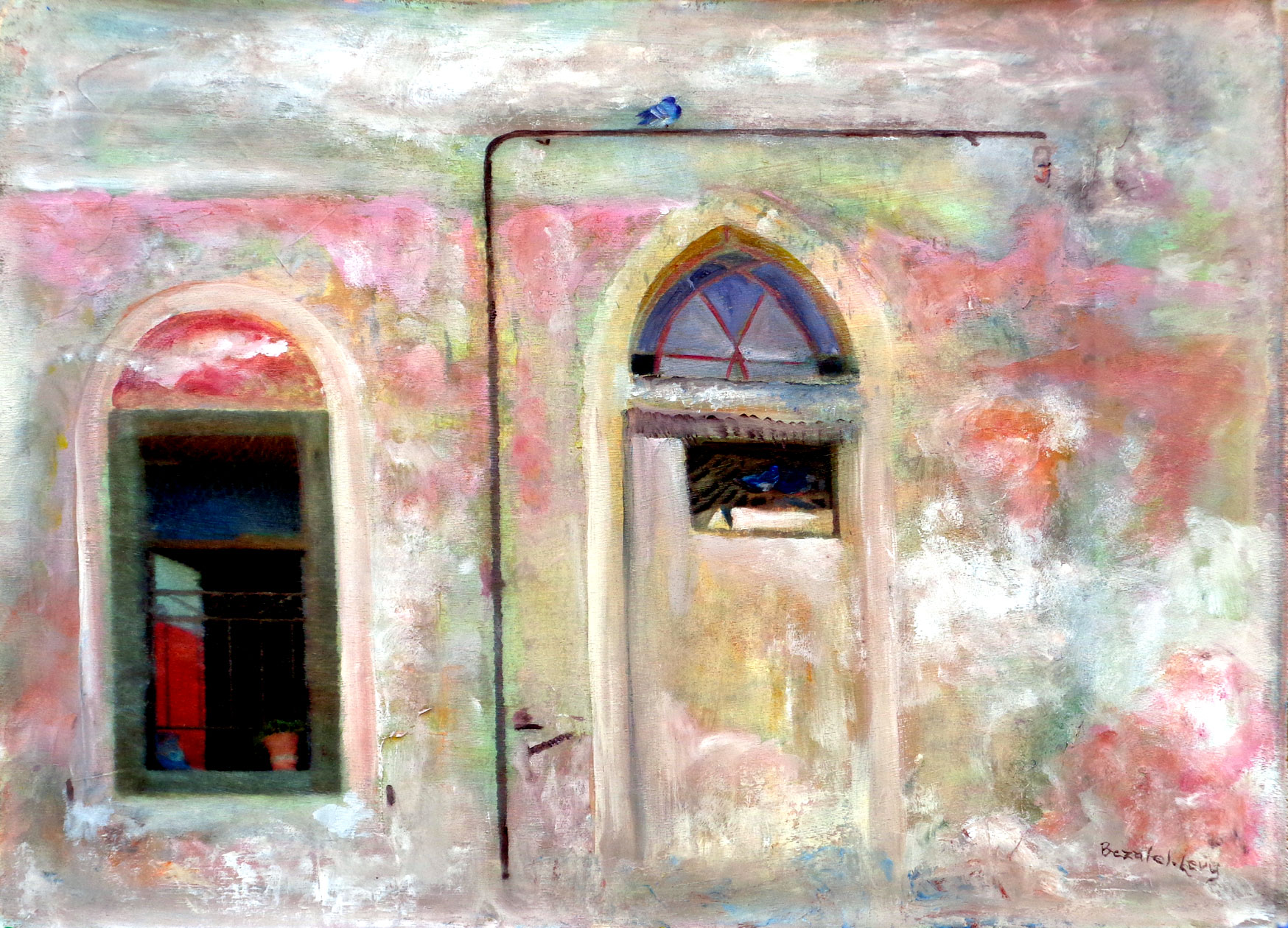 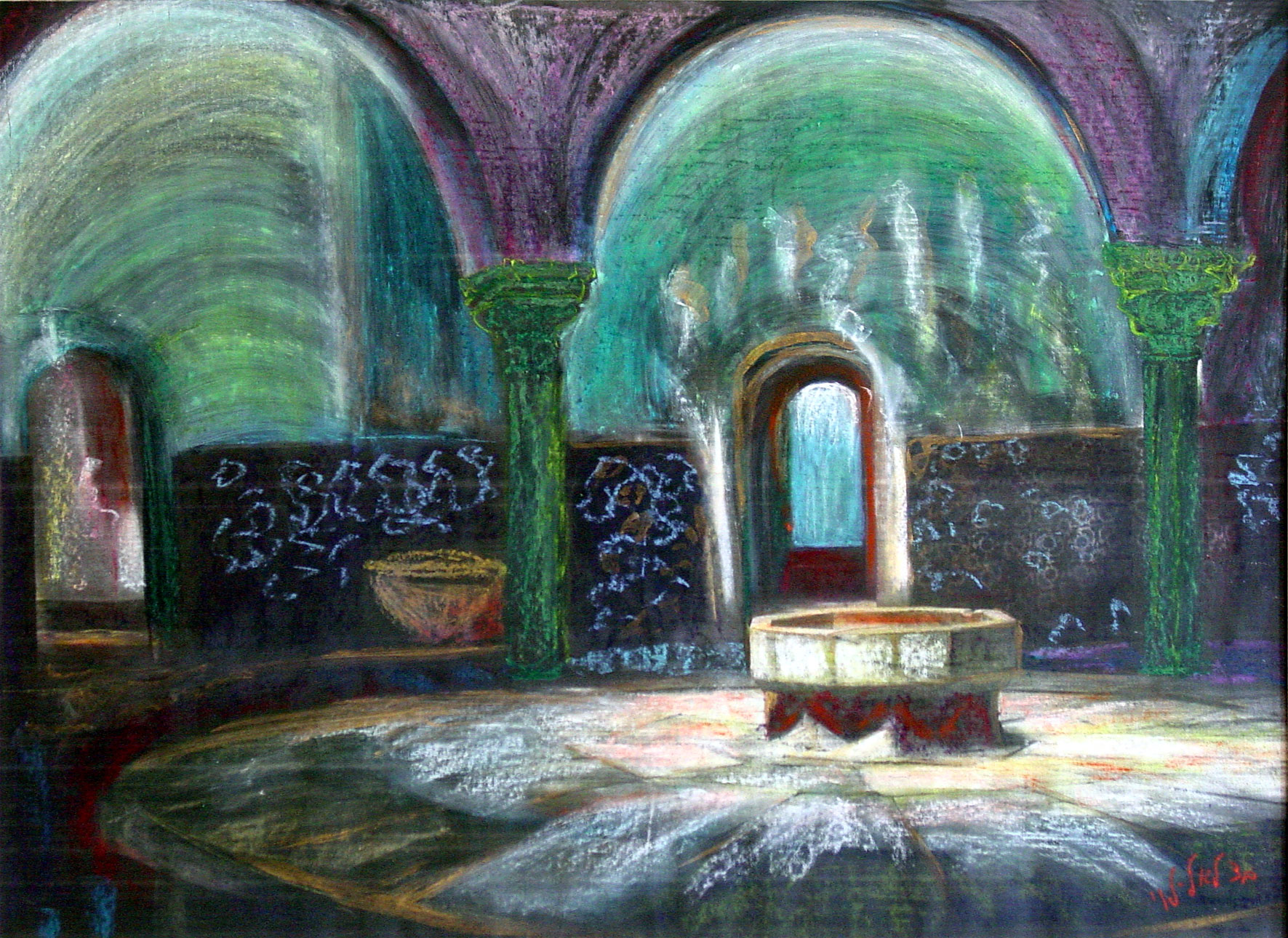 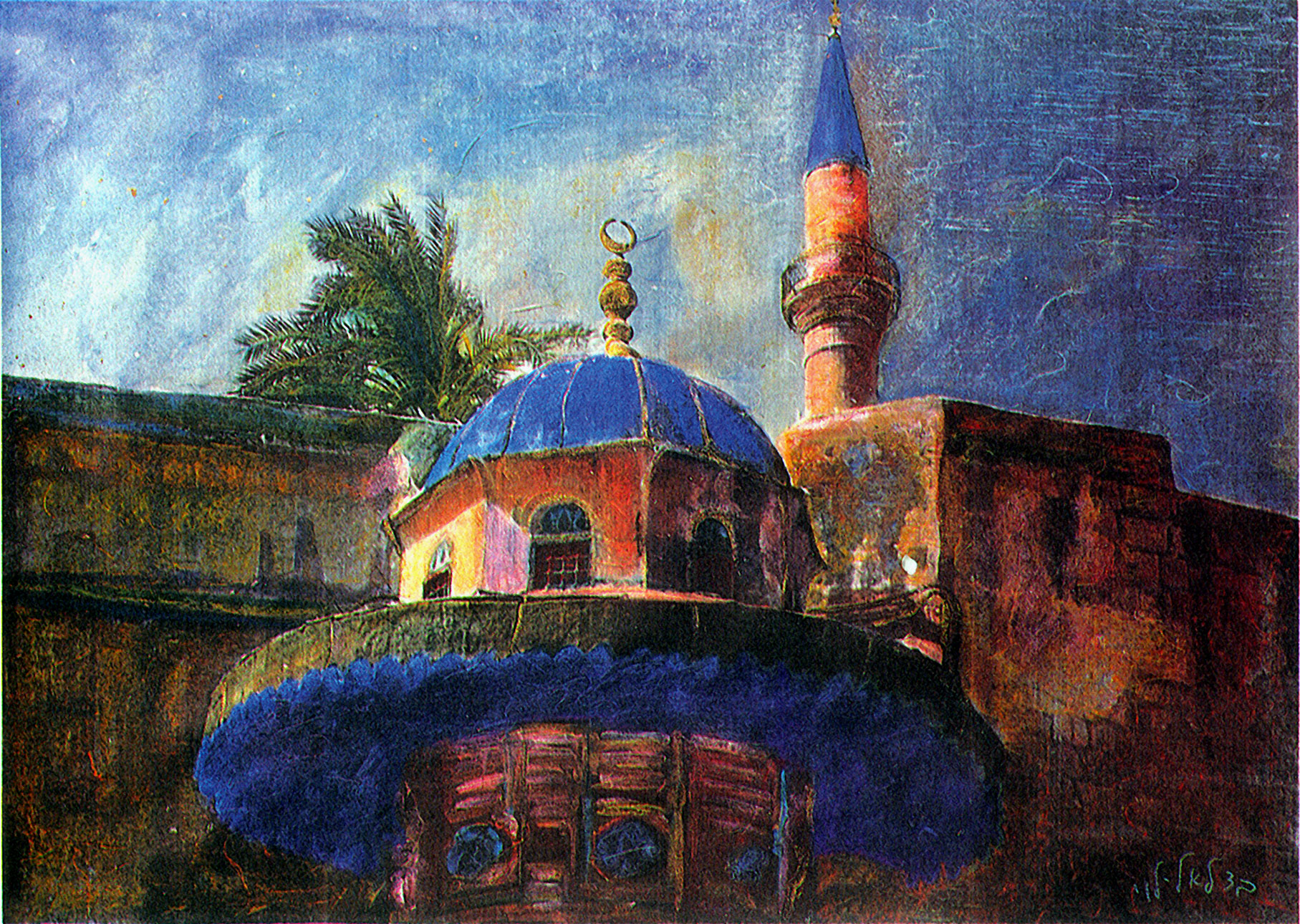 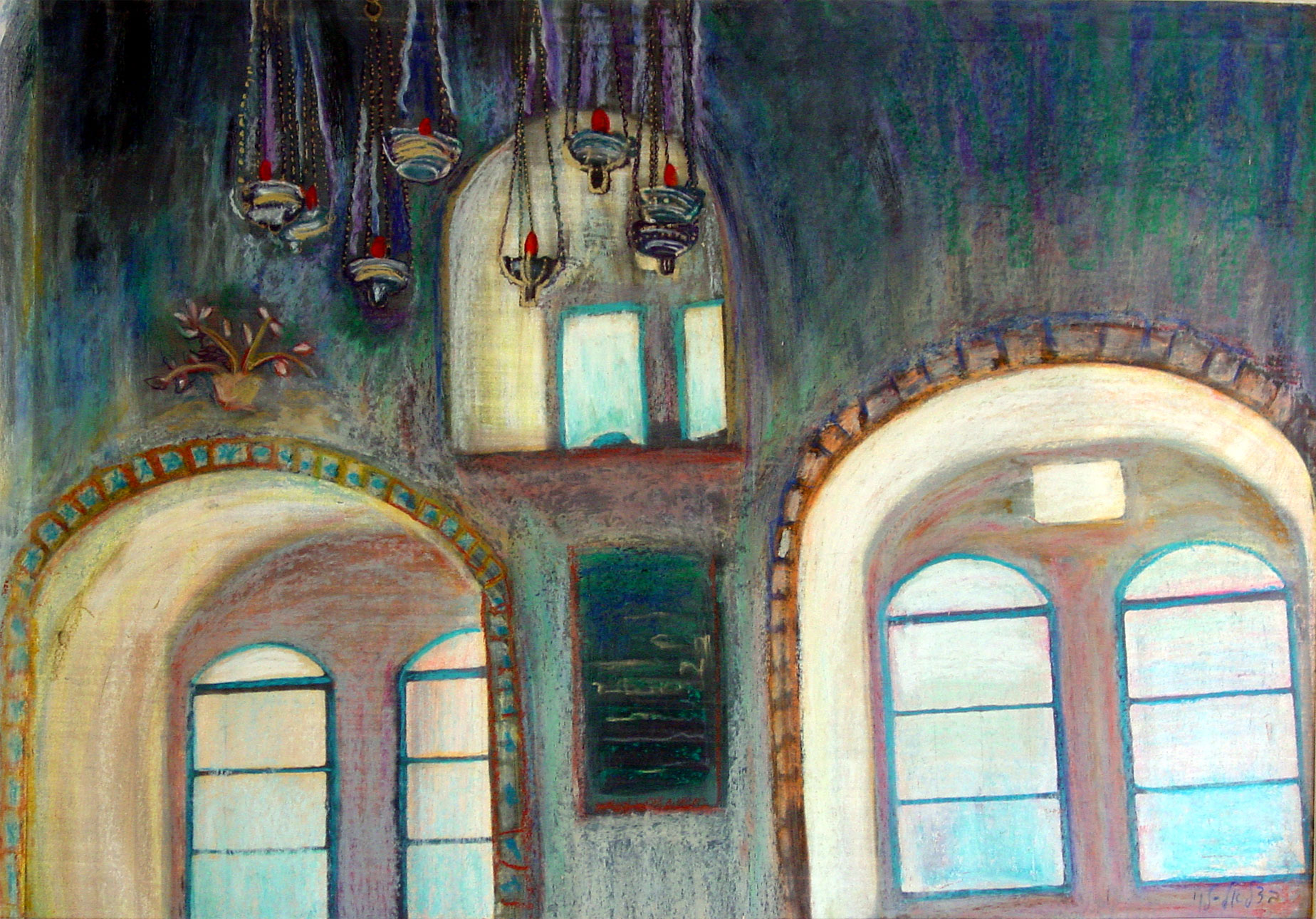 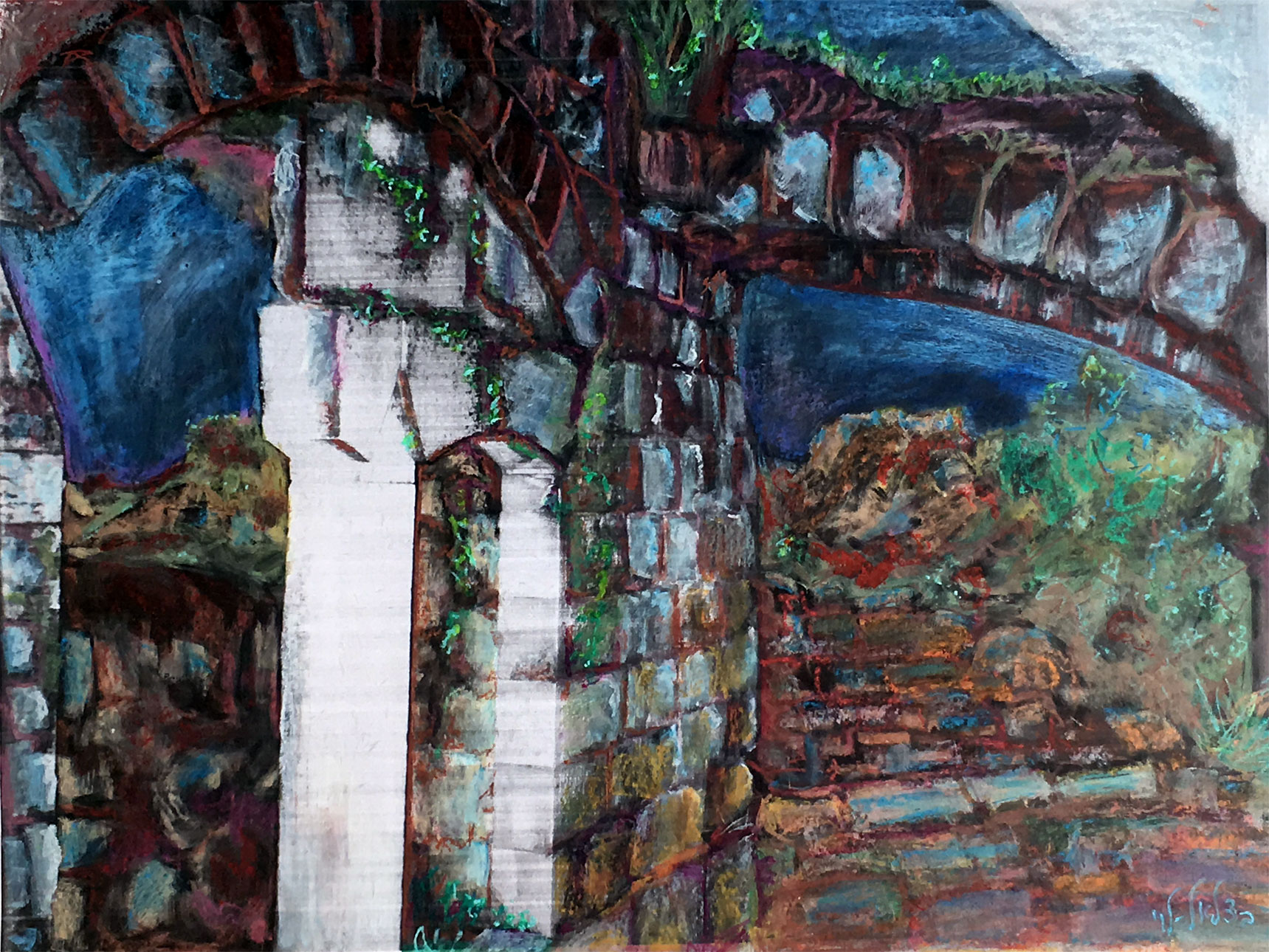 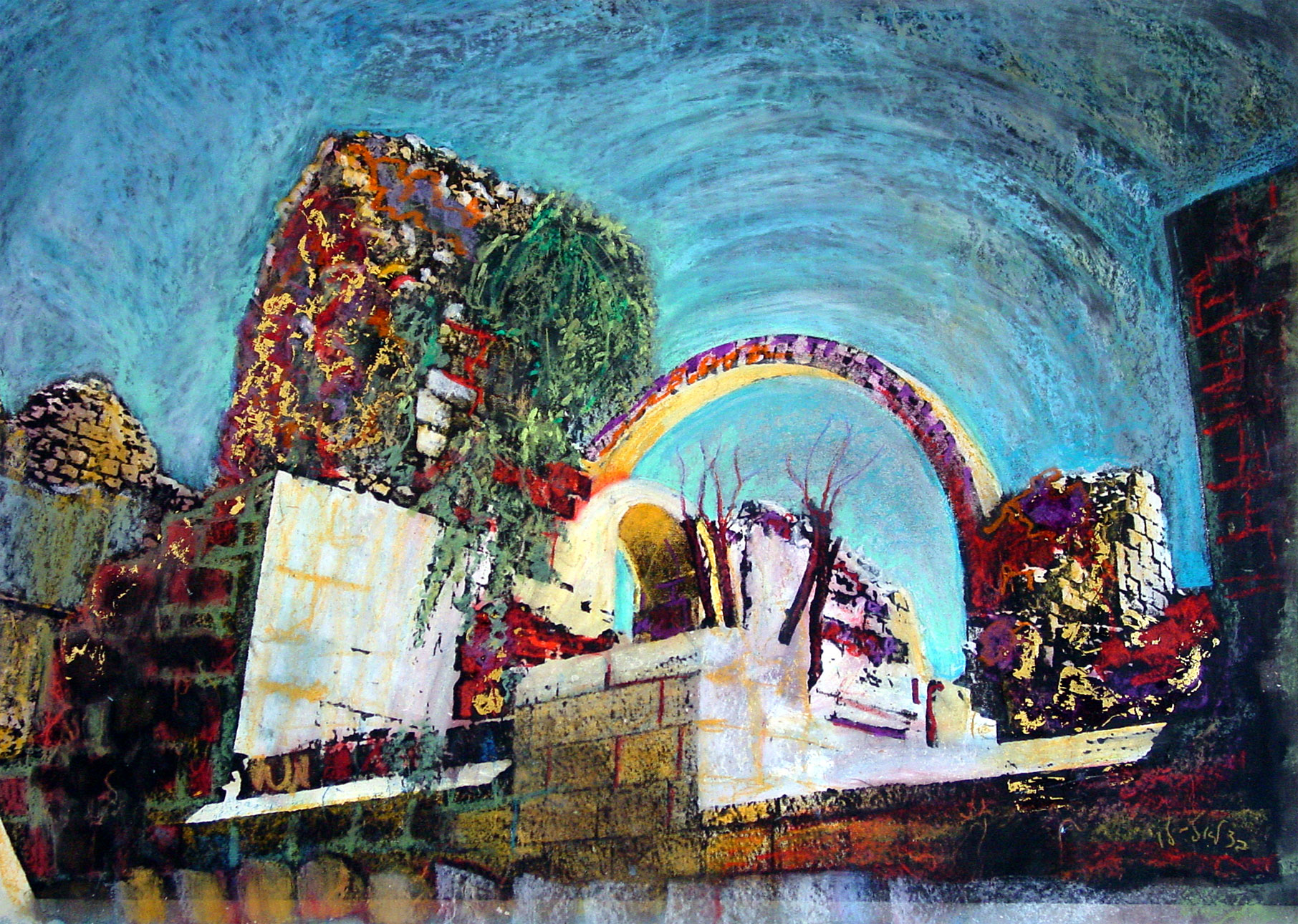 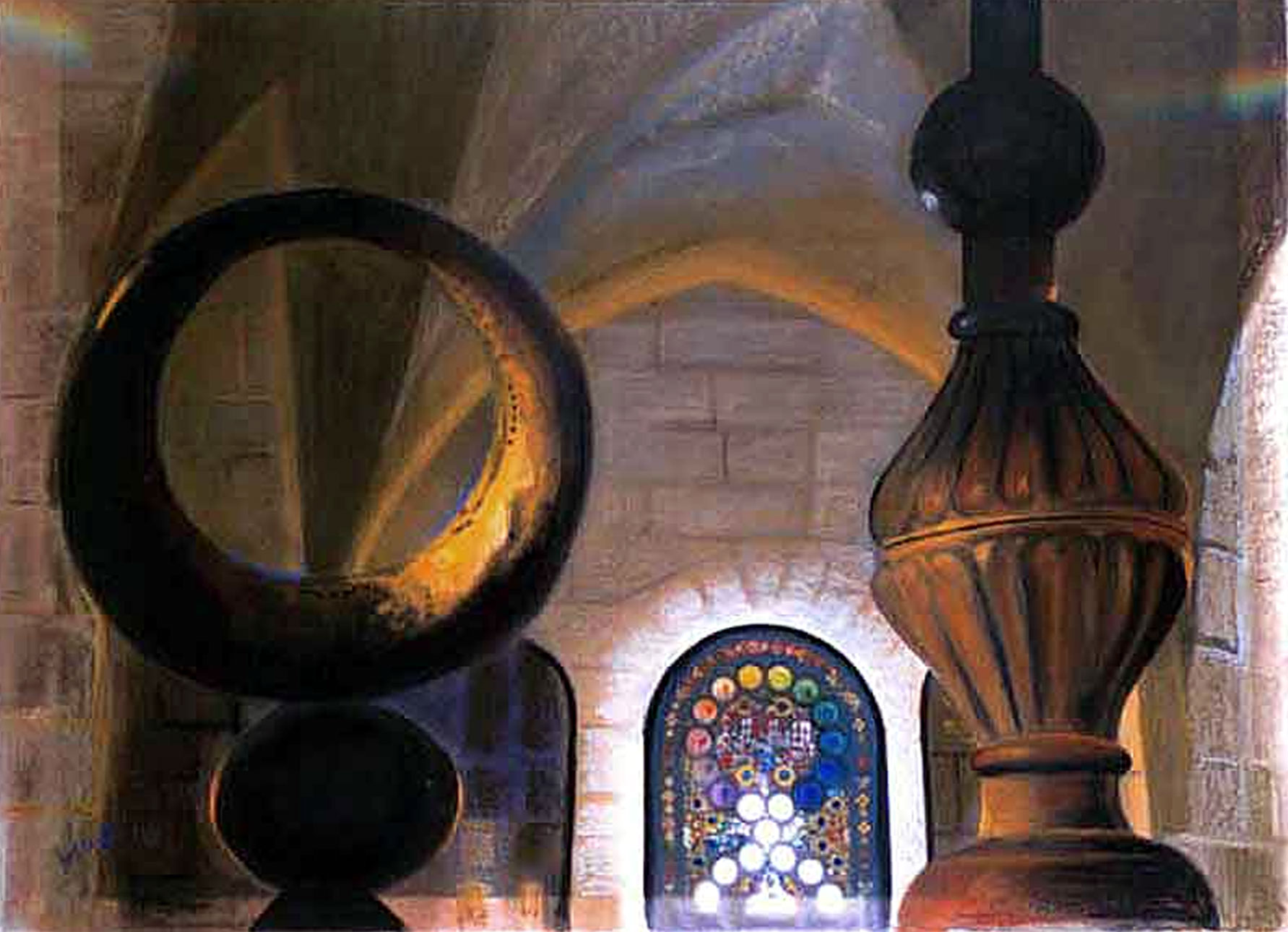 Retired Finials from the Dome of the Rock, 2000. 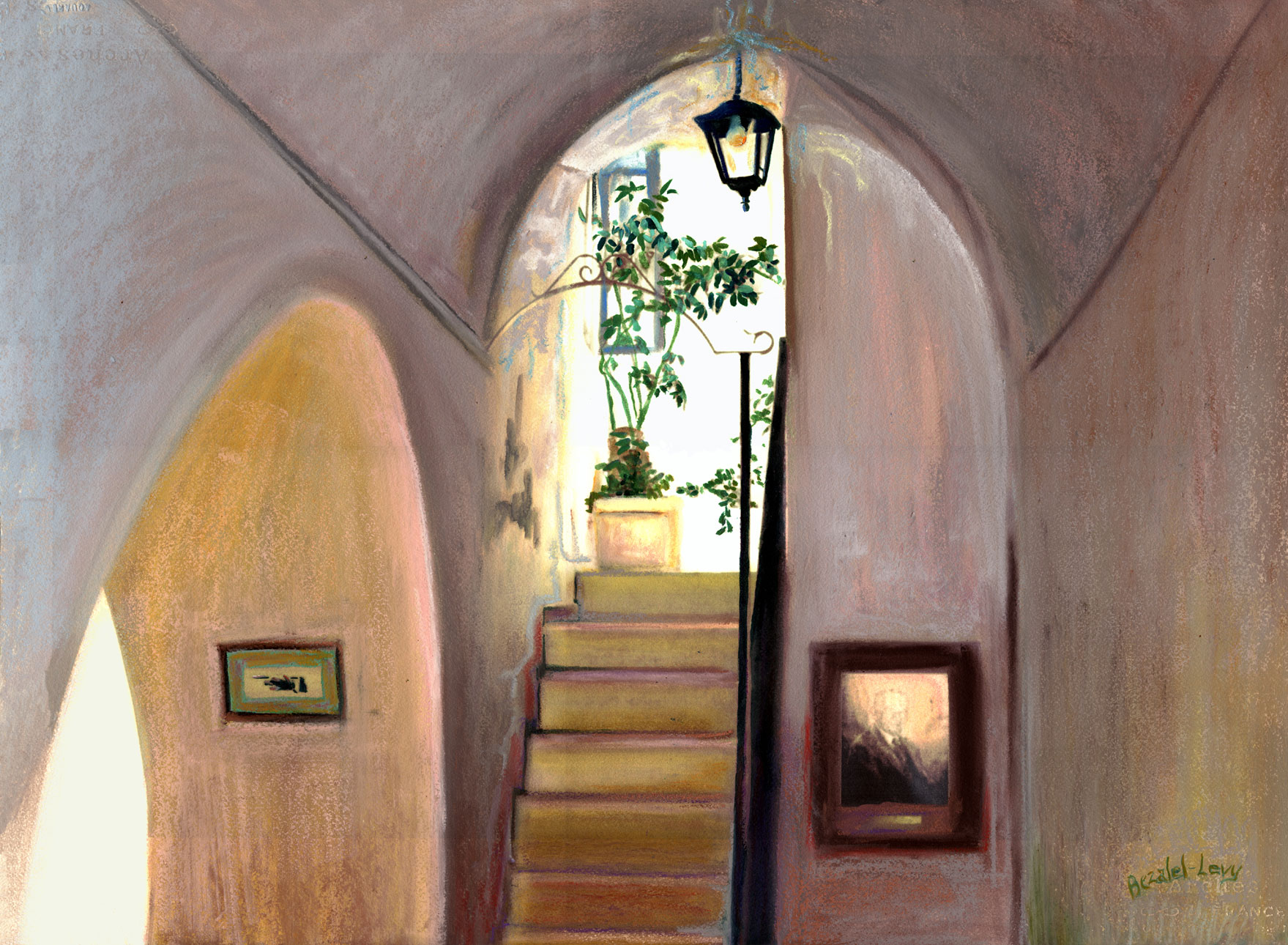 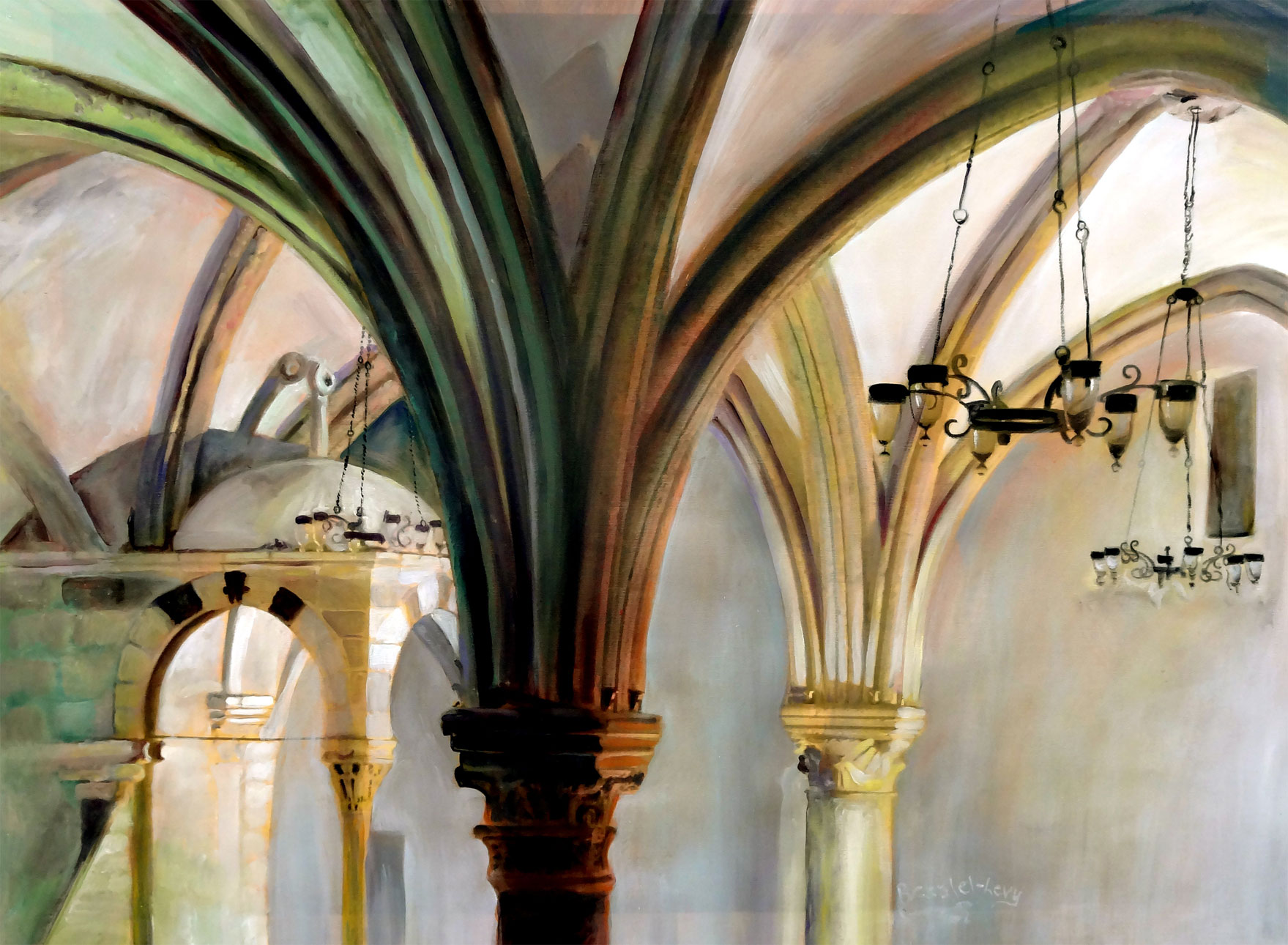 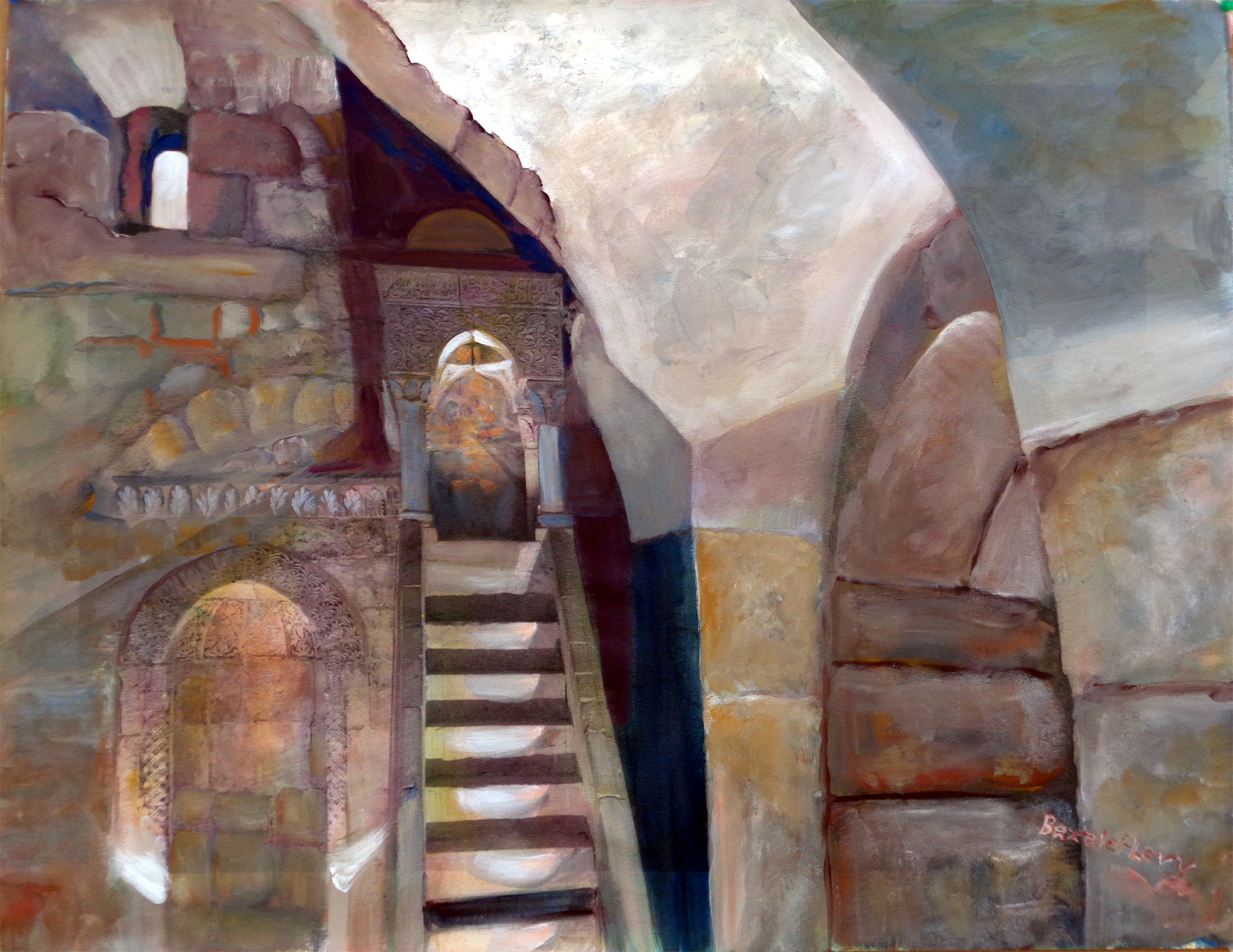 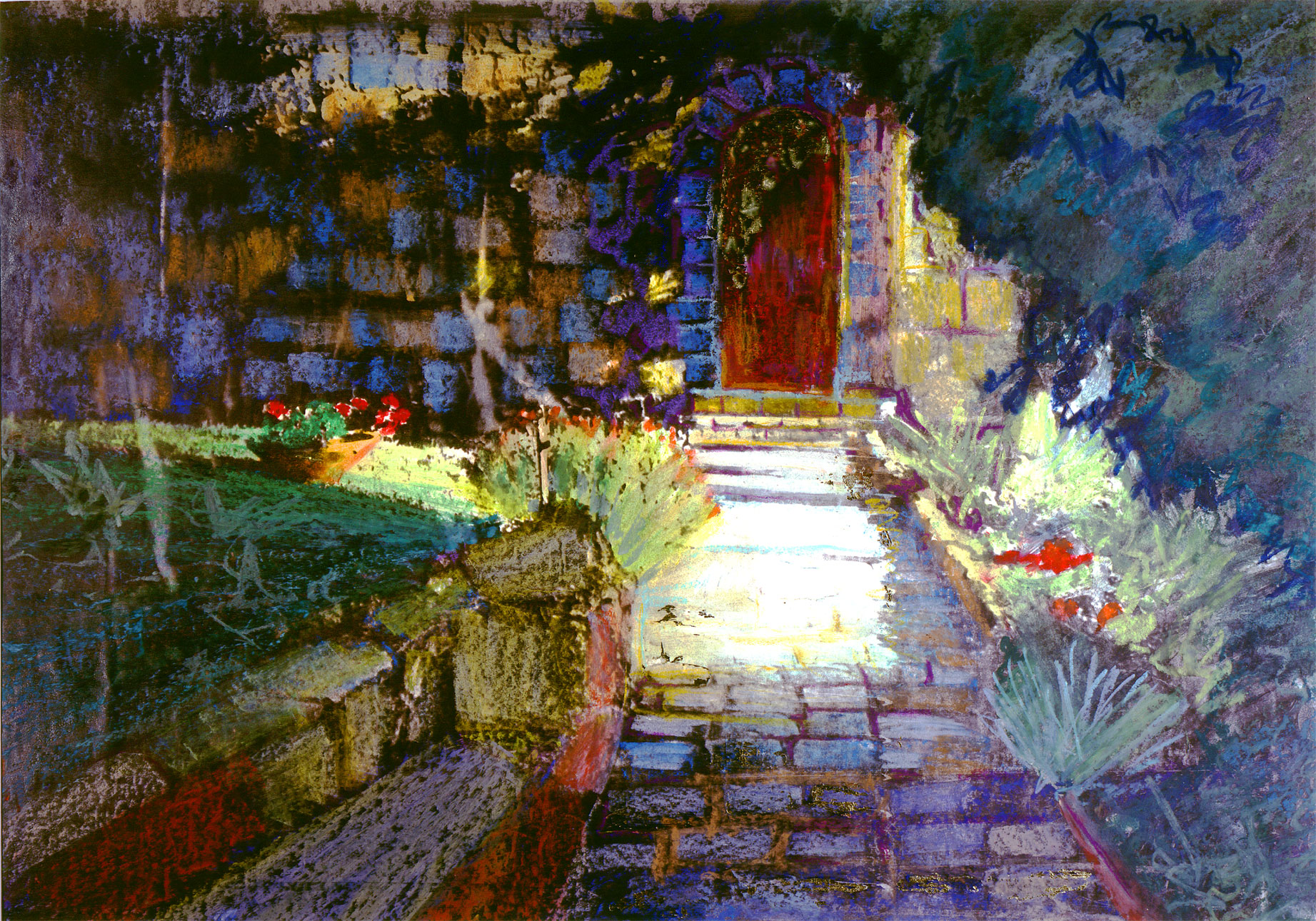 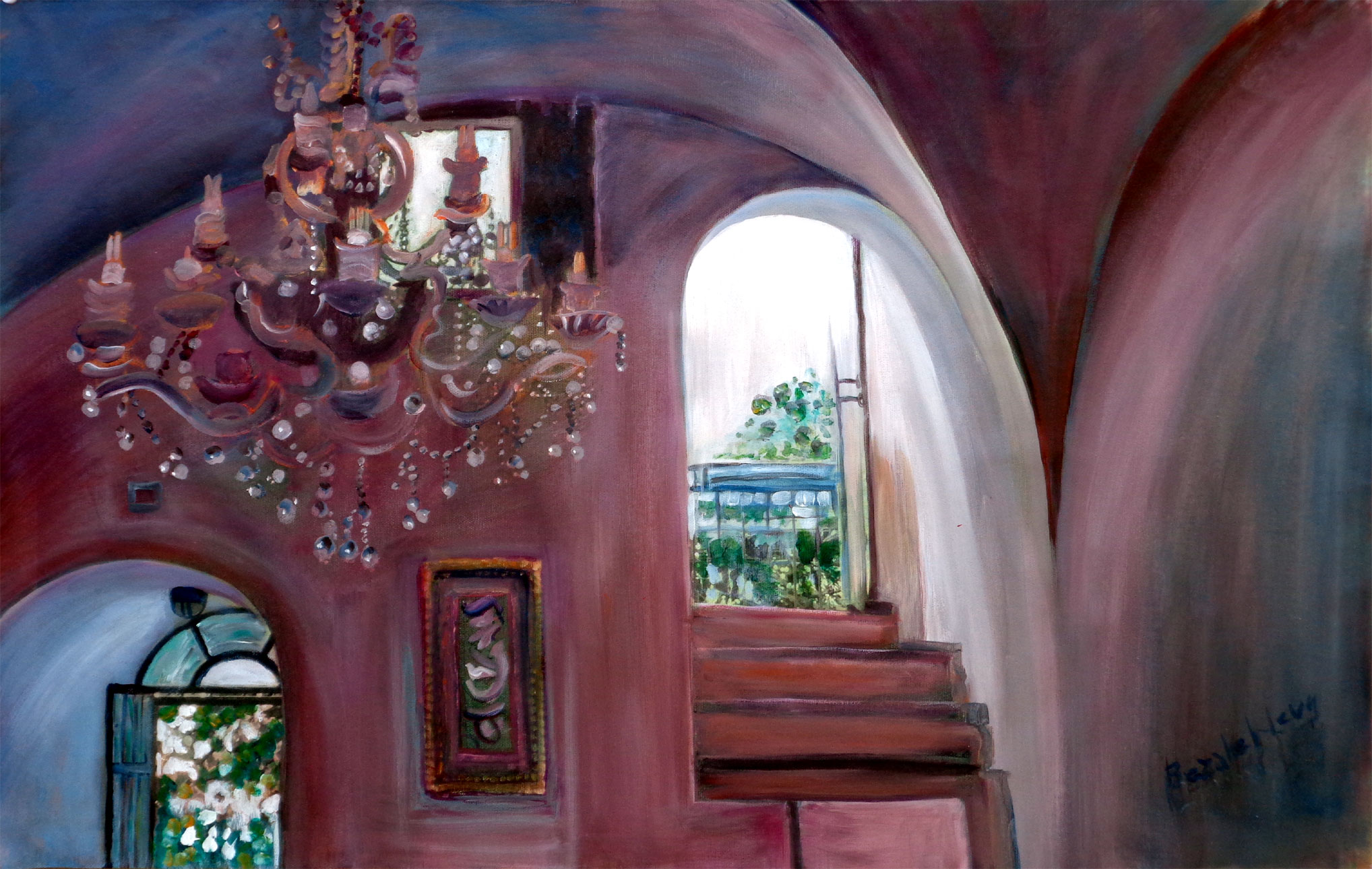 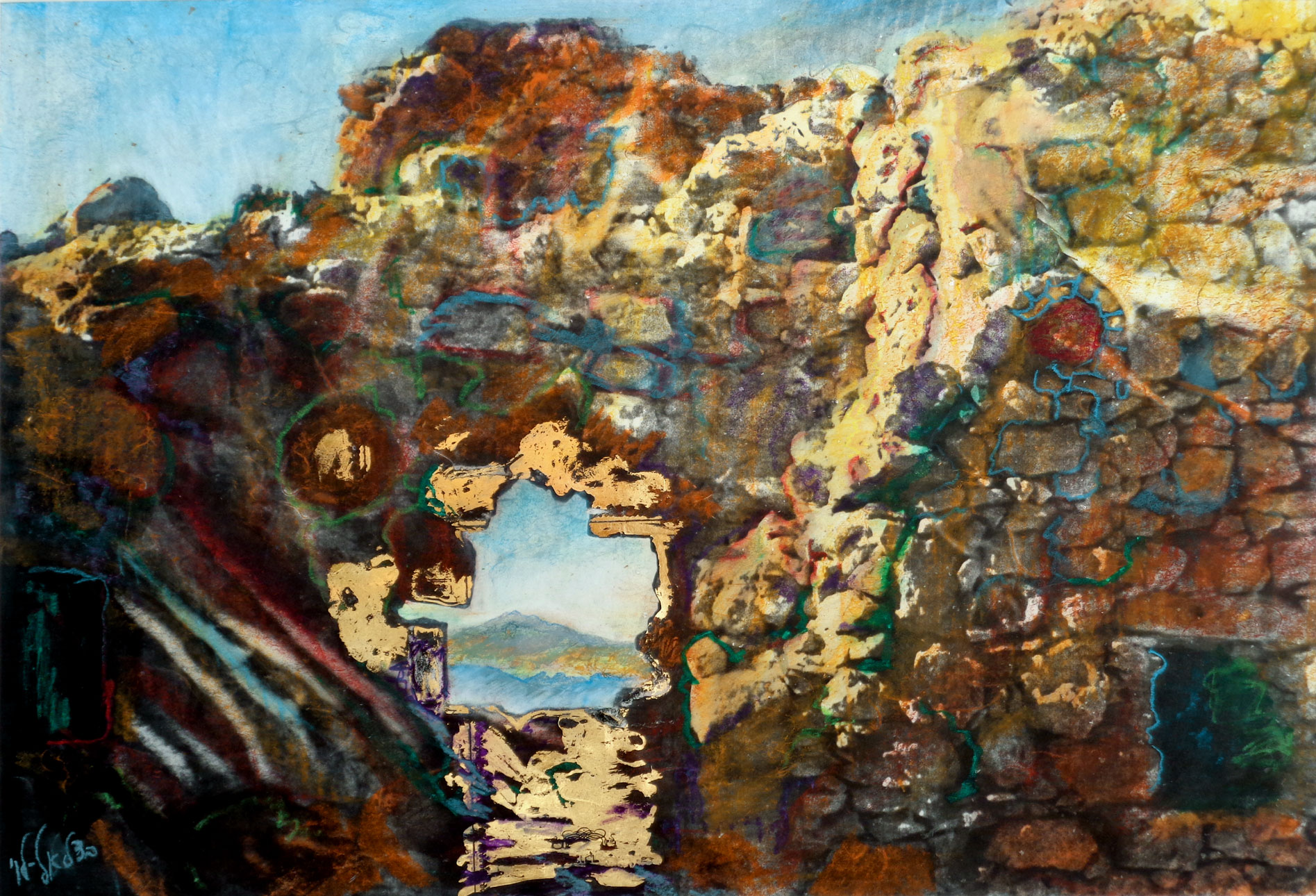 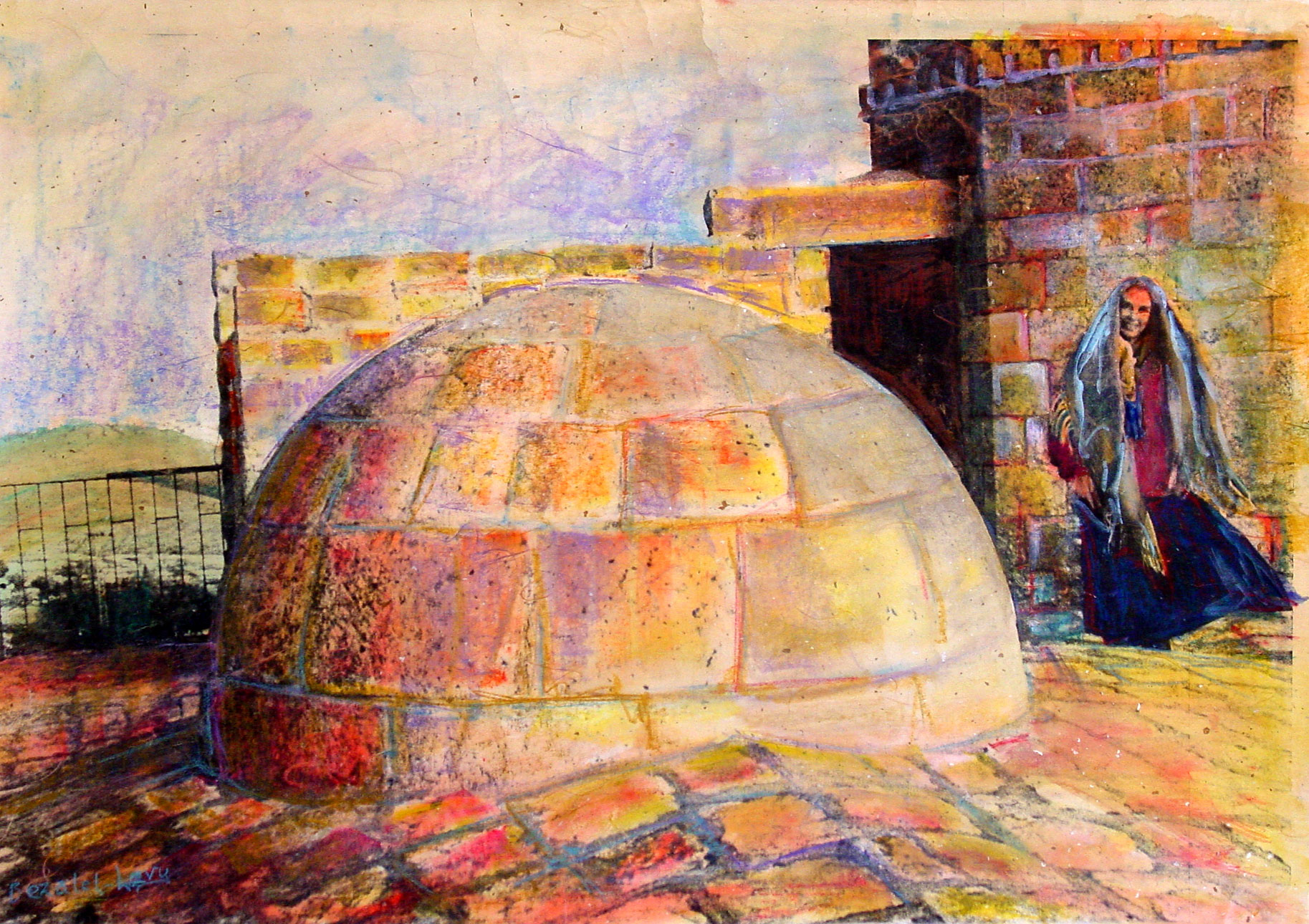 Yonnah at Neve Samuel, 1996.
About the Author
Chaim Bezalel is a dual citizen and resident of Israel and the United States. He was born in NYC and studied film at Northwestern University. He made aliyah in 1988, and met his wife, Yonnah Ben Levy, in Jerusalem shortly afterwards. She was raised in Seattle, made aliyah in 1981 and is a lifelong versatile artist and teacher, including teaching art in the Israeli school system. Together they collaborate under their combined signature of Bezalel-Levy. Many of their paintings have been commissioned or purchased for public venues and they have exhibited in several countries.
Related Topics
Related Posts
Comments