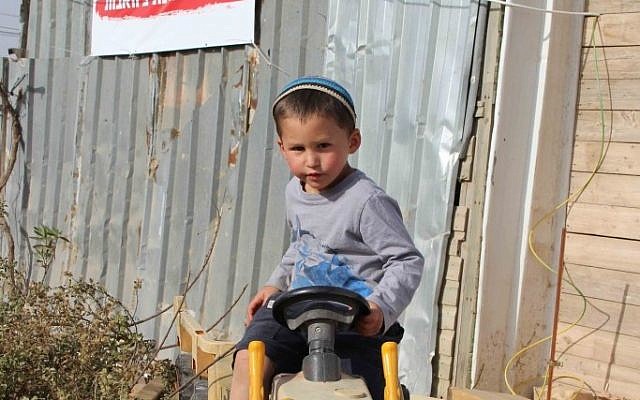 A child of Netiv Avot, where 17 homes are slated for destruction in March 2018. The sign behind him says, ‘No more destruction; normalize Netiv Avot.’ (Laura Ben-David)

Israel was built, in no small measure, out of chutzpah and a leap of faith. The “faith” part, despite the fact that so many of the early pioneers weren’t religious at all. Communities started this way. Kibbutzim started this way. Maybe it was a mistake, but that’s the way it always was. And, to some degree, still is.

Anyone who takes issue with the fact that something in Israel wasn’t done according to all the rules may as well take issue with the whole country. Right now, there’s one little tiny corner of the country that issue is being made over. A corner so close to my home that I can walk there without calling it exercise. A neighborhood of Elazar called Netiv Avot.

I went over there to take some photographs since it is so close to my home and because “Netiv Avot” is on everyone’s lips. The Supreme Court has determined that 17 homes there should be destroyed. 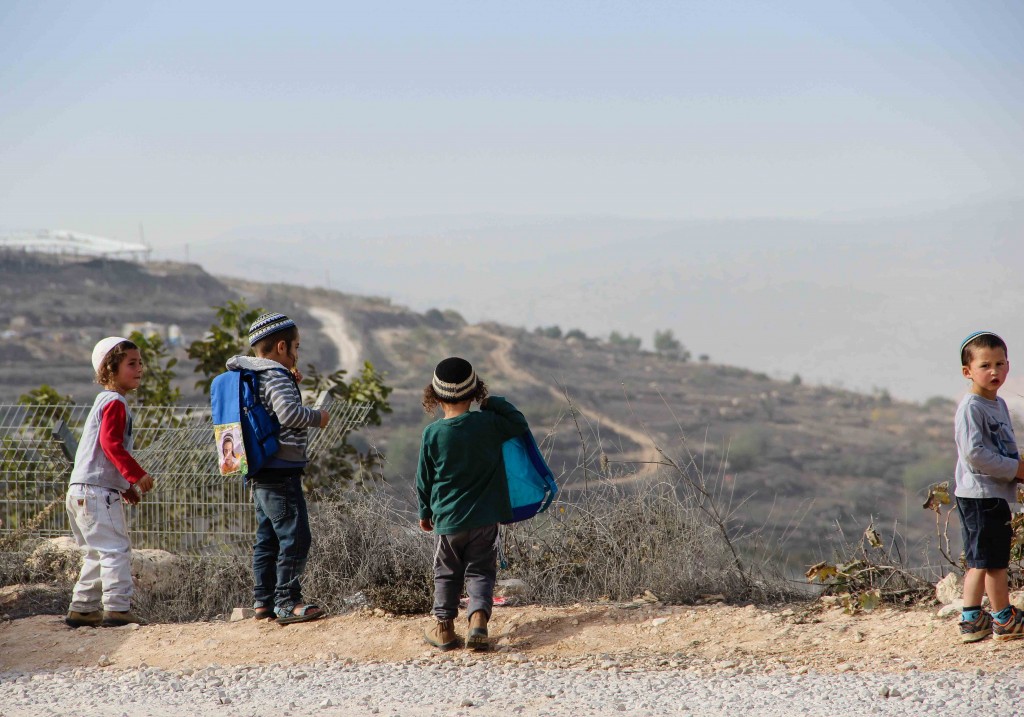 Children in Netiv Avot gaze at the view. (Laura Ben-David)

I’m not one to jump to defend anything automatically, whether because “Jews” or “Israel” or anything else. Sometimes unfortunate things happen to good people and it’s a shame, and even devastating, but there’s nothing we can do about it. I was determined to understand why this “unfortunate thing” was happening to these “good people” so I could commiserate and lend support, while respecting the rule of law and what’s right.

Except I couldn’t. With all that I could see and understand, the court’s ruling is simply wrong. I’m not arguing the legality; other people can do that. I’m arguing that in this case, the ruling is absurd, outrageous, and, quite simply, wrong.

It’s important to understand that the state encouraged the people to establish the neighborhood alongside Elazar back in 2001 on what they were told was state land. The government then continued to encourage the neighborhood’s development with supportive infrastructure.

Apparently radical left-wing NGOs filed a petition against the neighborhood 13 years after it was established, and it was determined that two strips of land that pass through a number of the houses might have been worked by Palestinian farmers and so were switched from “state land” to “private Palestinian land.”

Realize that NO Arab has claimed the land.

Also realize that in a good number of the cases, it’s barely more than a meter strip of the house in question. Or a room. Something that could easily be removed and rebuilt on land that is not on this questionable strip.

If all of this weren’t absurd enough, former Supreme Court President Miriam Naor wrote in the ruling, “Reopening the issue would undermine the principle of the finality of judgment and the principle that judgments must be implemented even if there was insufficient justification.”

Even if there was insufficient justification. Yeah, she said that.

Uh, no. This is Israel. People don’t take “No” for an answer. Certainly when families’ homes and livelihoods are on the line and it’s for no good reason. 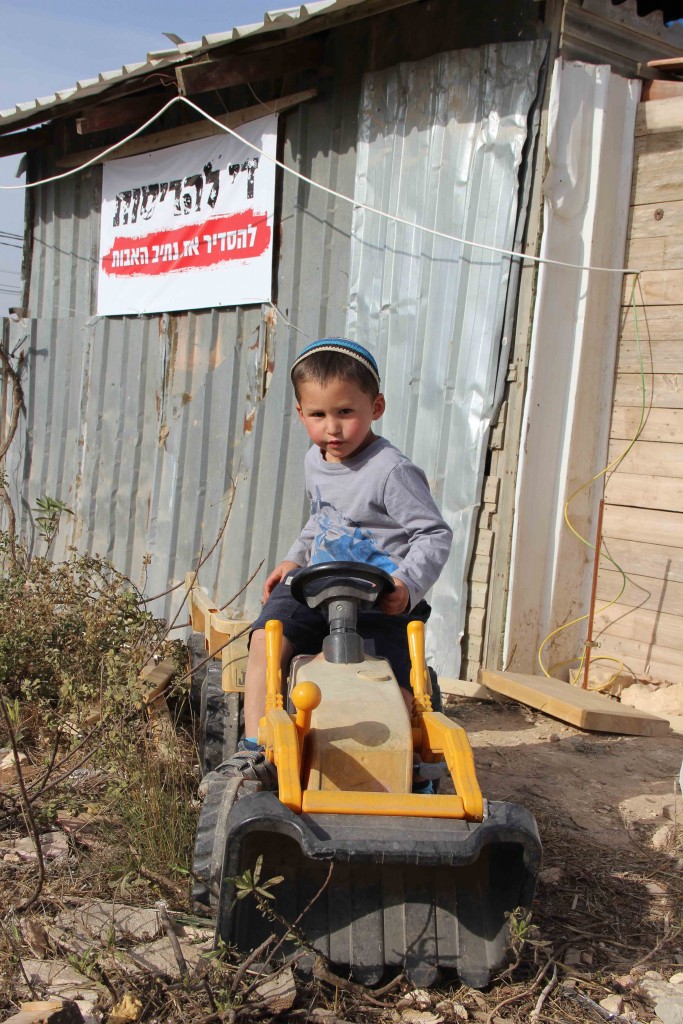 While the homes were slated to be destroyed in March 2018, suddenly there is a plan to come in the next few days and destroy the carpentry business next door to one owner’s home since it “isn’t a house” and so doesn’t qualify for the wait until March.

Oh, and the fellow who owns it is currently doing his reserve army duty for Israel, even while he knows that Israel is going to be repaying him for his service shortly with the destruction of his livelihood.

The situation does not look good, but the people retain their hope, and unwavering love of Israel. Let’s hope Israel returns the favor. 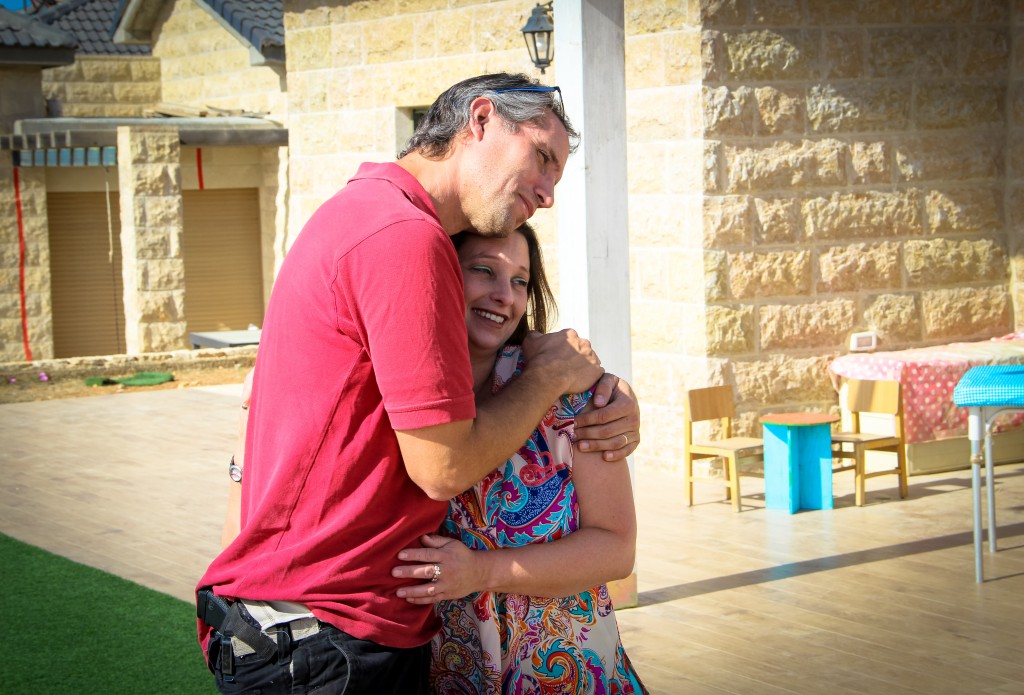 David and Yael den Heijer made aliyah from Holland in 1997. They have five children, ages 3 to 11. They’ve been living in Elazar for over 13 years. There is a one meter strip of one room that is on the disputed land (the area just behind them). Note the red lines on their neighbor’s house on the left, marking the strip of home that runs right through the center of their home. (Laura Ben-David) 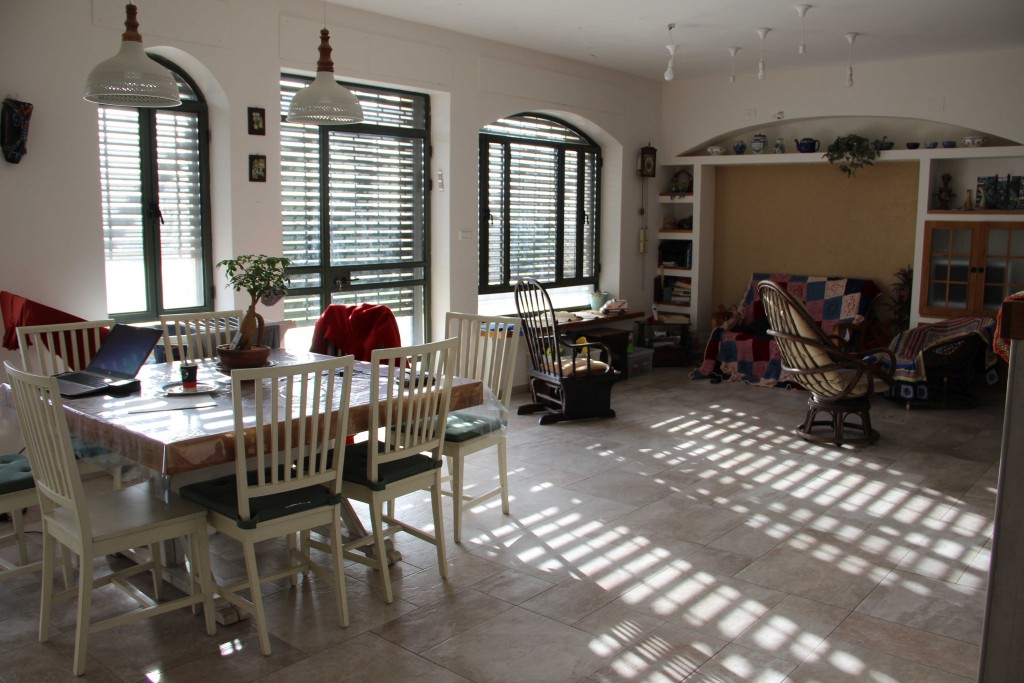 The main area of the den Heijer home, slated to be destroyed. All for a one meter strip in one bedroom. (Laura Ben-David) 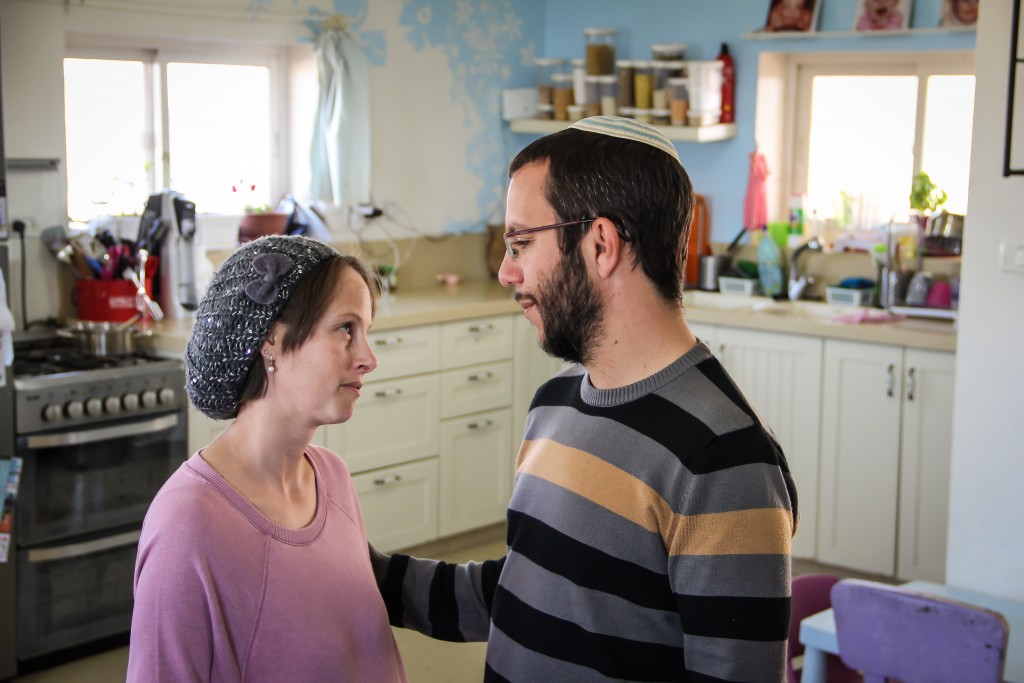 Natan and Meg Alexander made aliyah from Australia and South Africa, respectively. They have been renting their home in Elazar for four years, but the owners have been there for longer. They worked as emissaries out of the country for three years teaching Zionism. They are now wondering how they will be able to explain to their children in a few days why the state is destroying these homes. (Laura Ben-David) 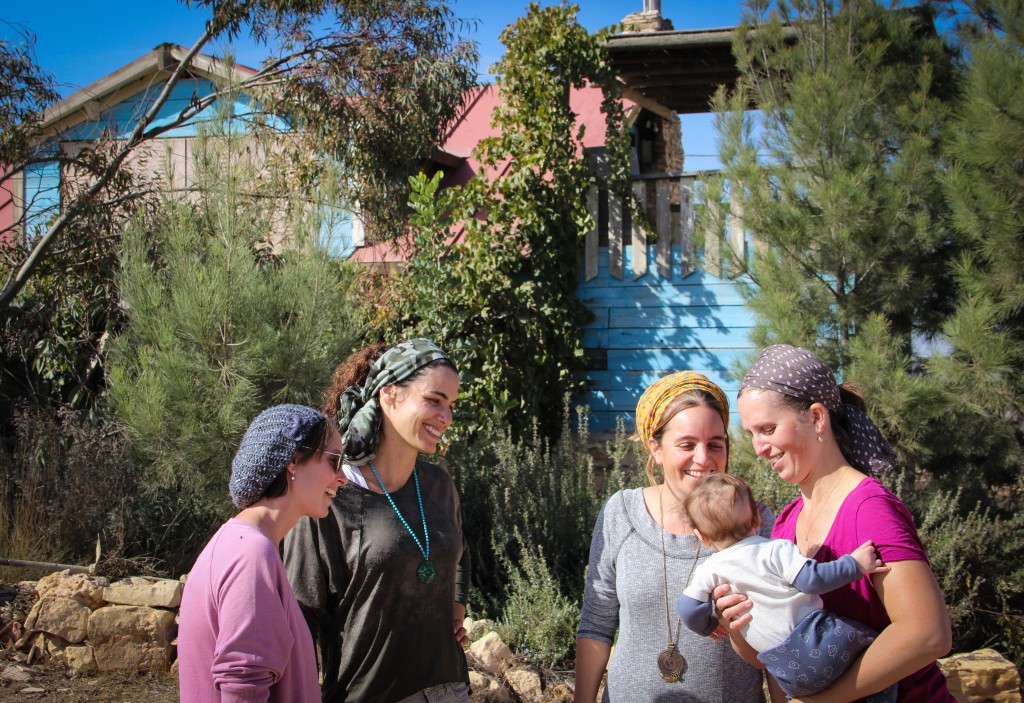 Shahar Aharonovitch (right), with her 3-month-old, stands in front of her house surrounded by friends and neighbors. Shahar’s husband, Zvi, is away doing reserve duty, while their carpentry business next door is under threat to be destroyed any day. They have five other children, up to age 13. Their house is on the list for destruction as well. (Laura Ben-David) 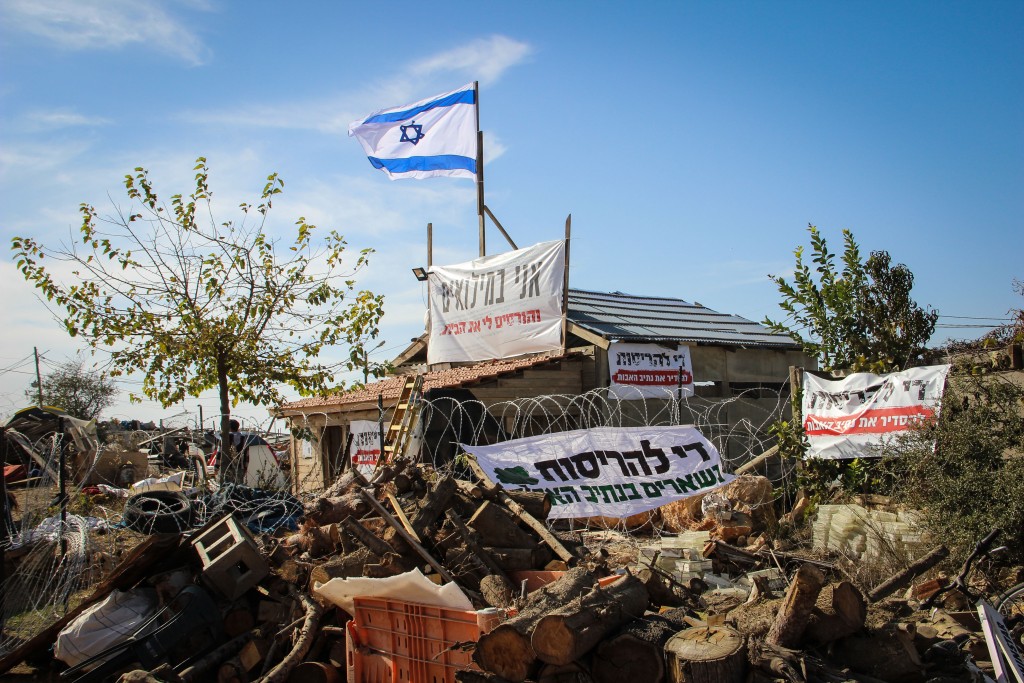 The carpentry workshop, owned by Zvi Aharonovitch, stands at risk of imminent destruction. The sign below the flag says, “I am in reserves; and they’re destroying my house.” (Laura Ben-David) 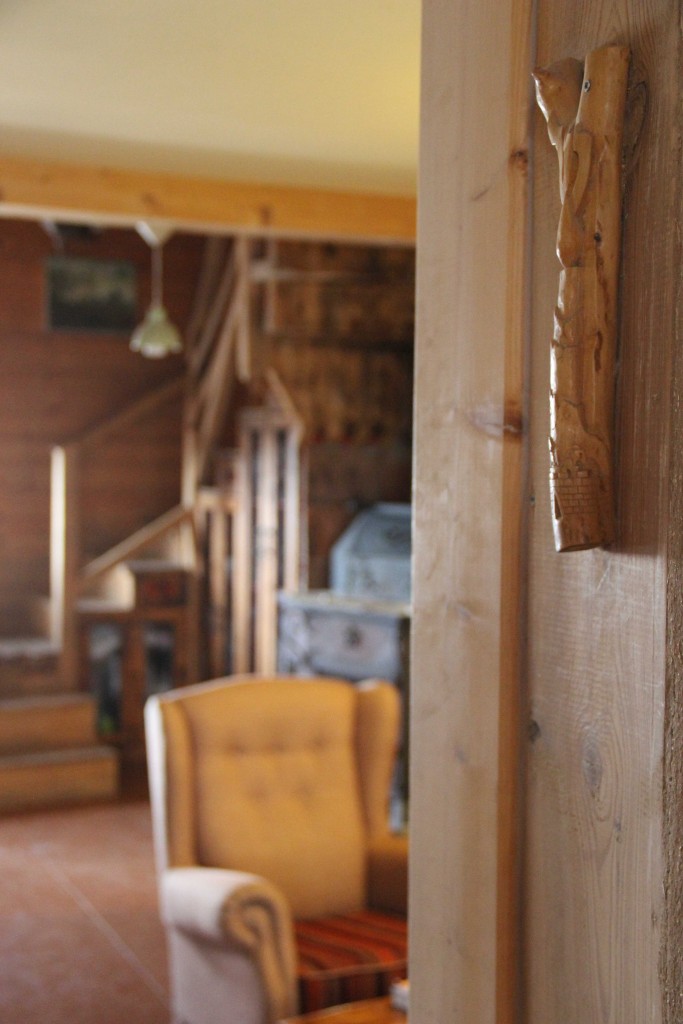 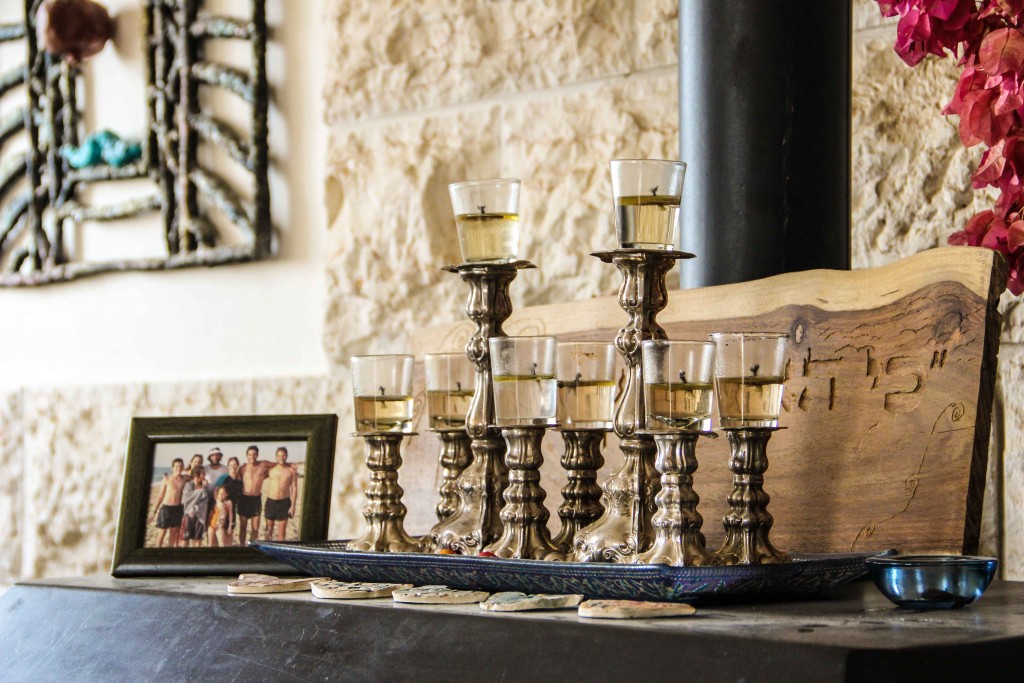 Even at the beginning of the week, one family’s candles are set and ready. There is a certain defiance: ‘These candles will always be lit here.’ As they should. (Laura Ben-David) 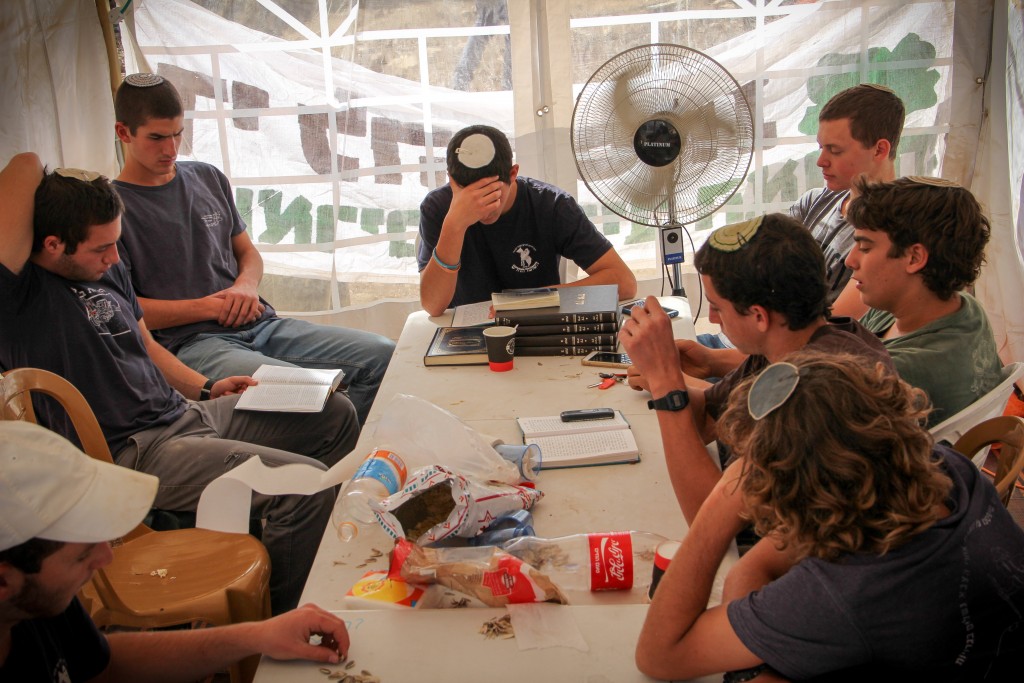 Local youth, learning Torah together to merit the saving of the community are among the many that have converged on Netiv Avot in recent days. (Laura Ben-David) 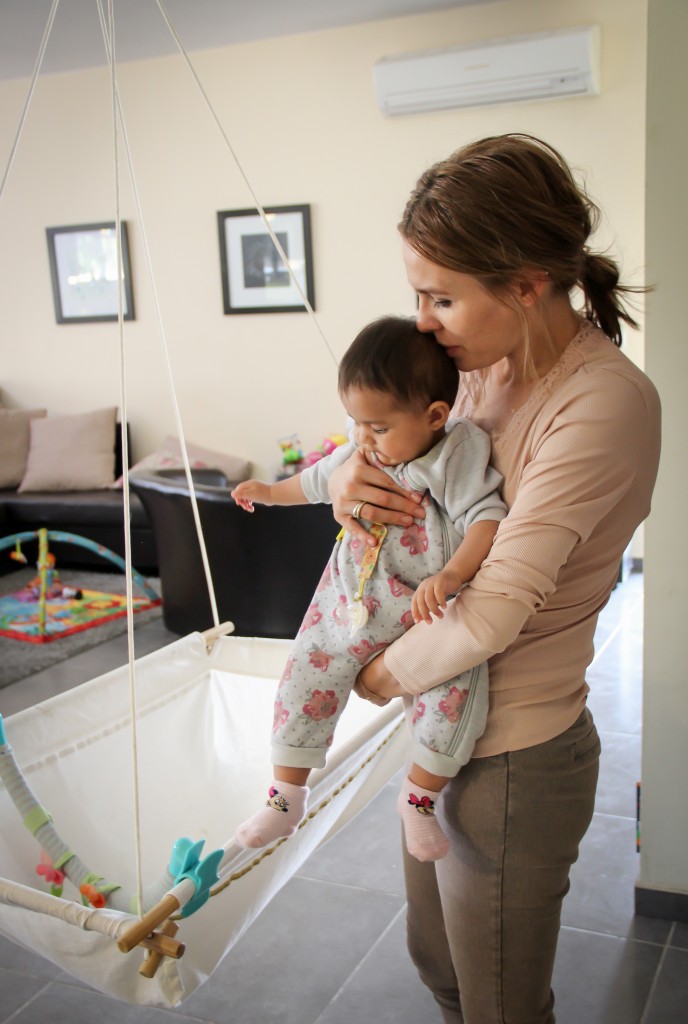 Orly Chai, with her young daughter. Their home is slated to be destroyed. (Laura Ben-David) 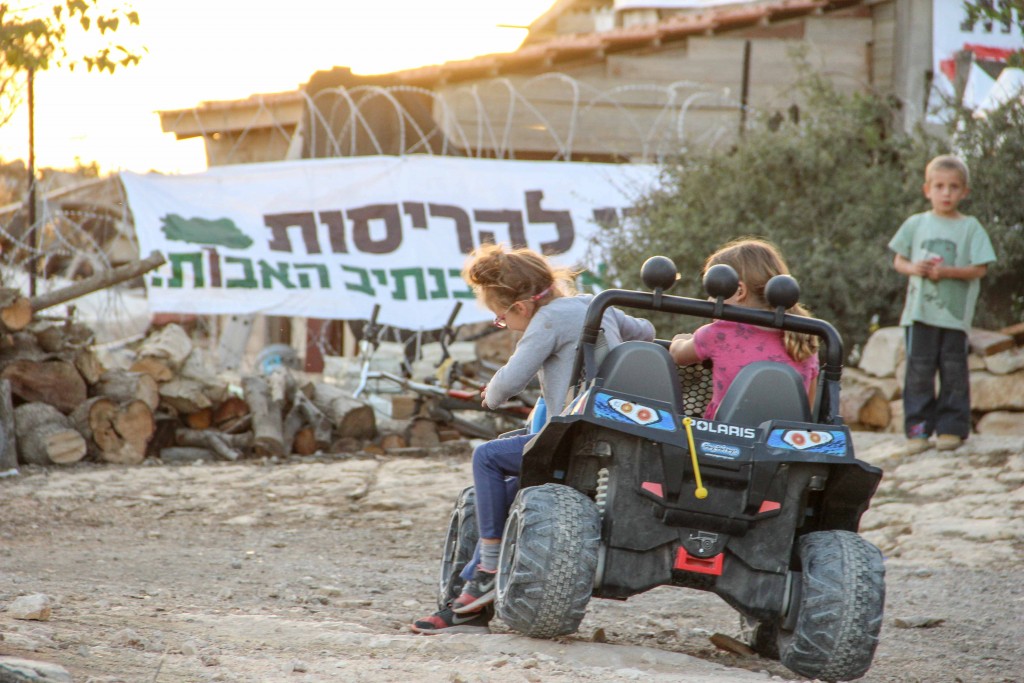 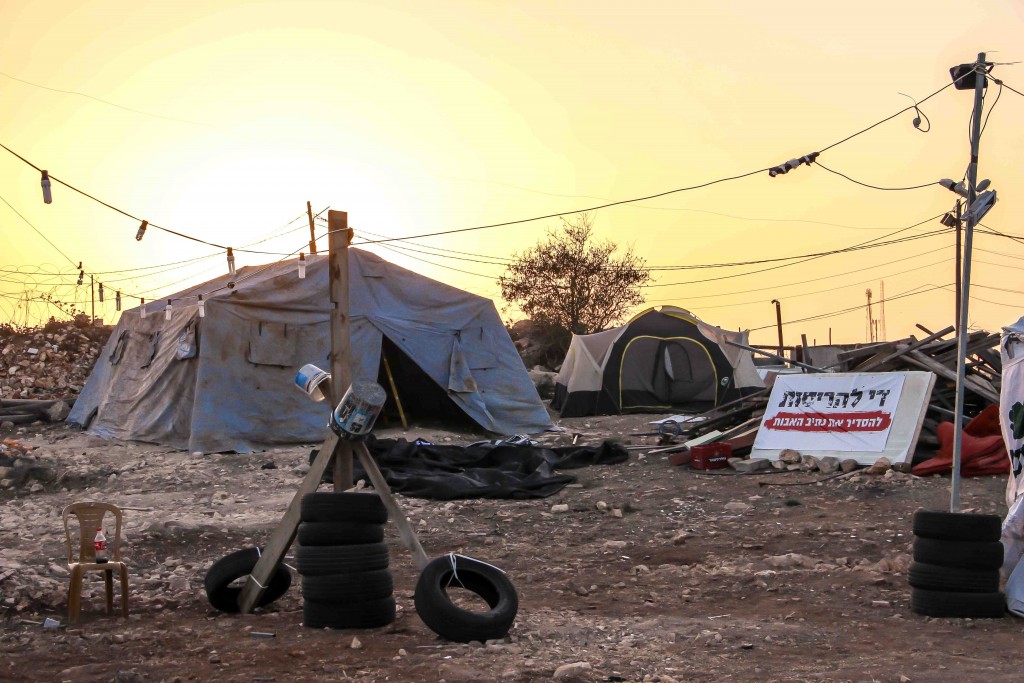 Some of the tents set up to house the many people who are streaming in to support and to help. (Laura Ben-David) 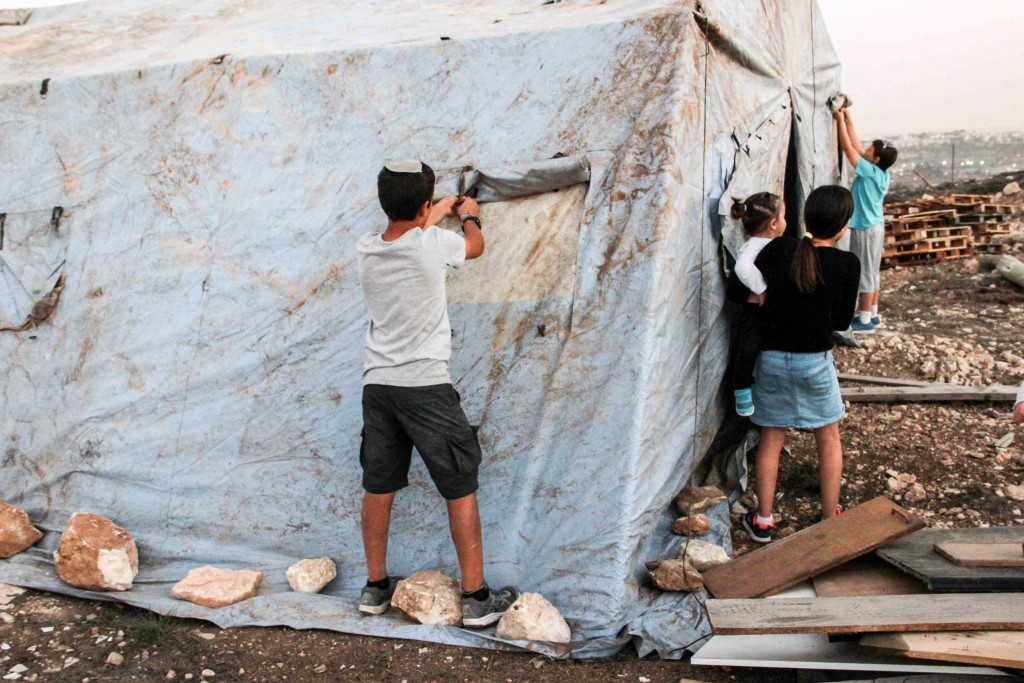 Everyone seems to be pitching in to help. (Laura Ben-David) 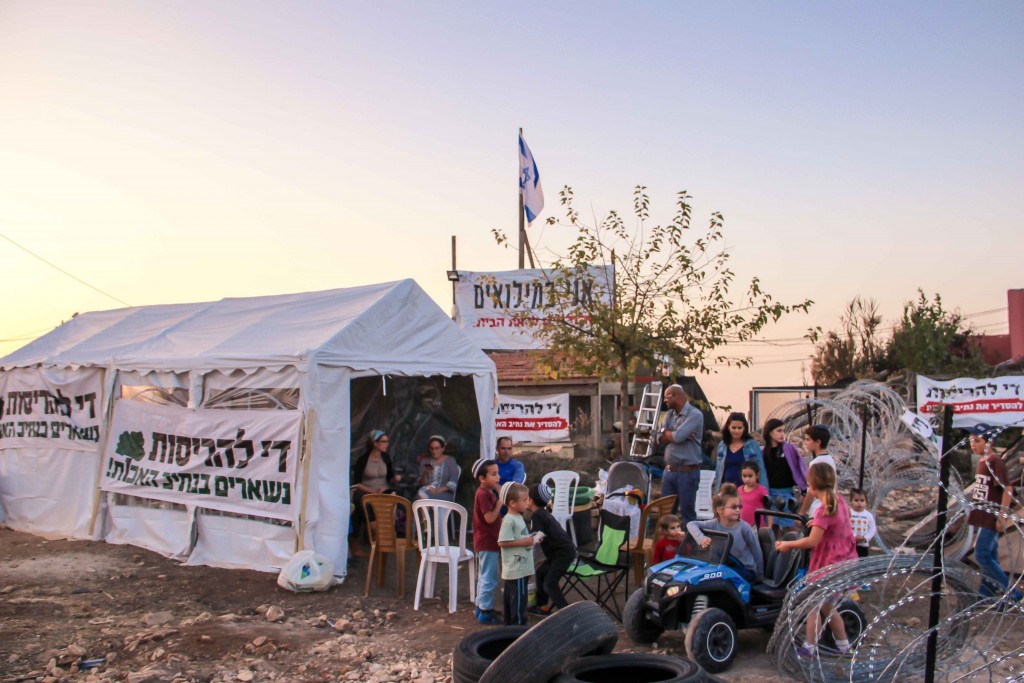 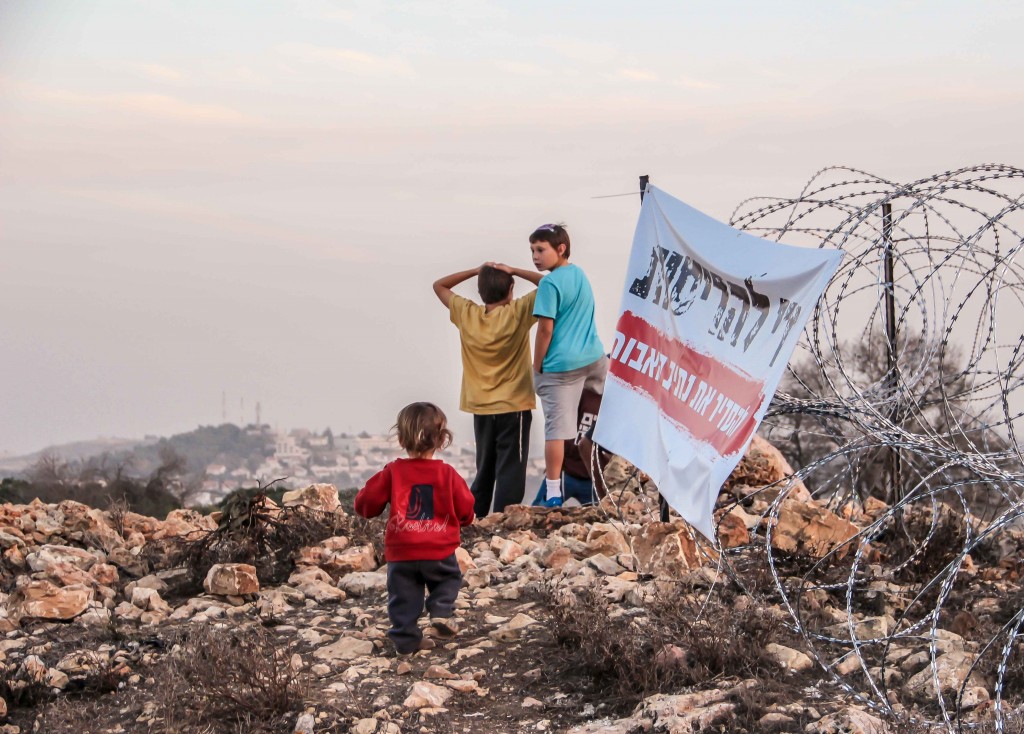 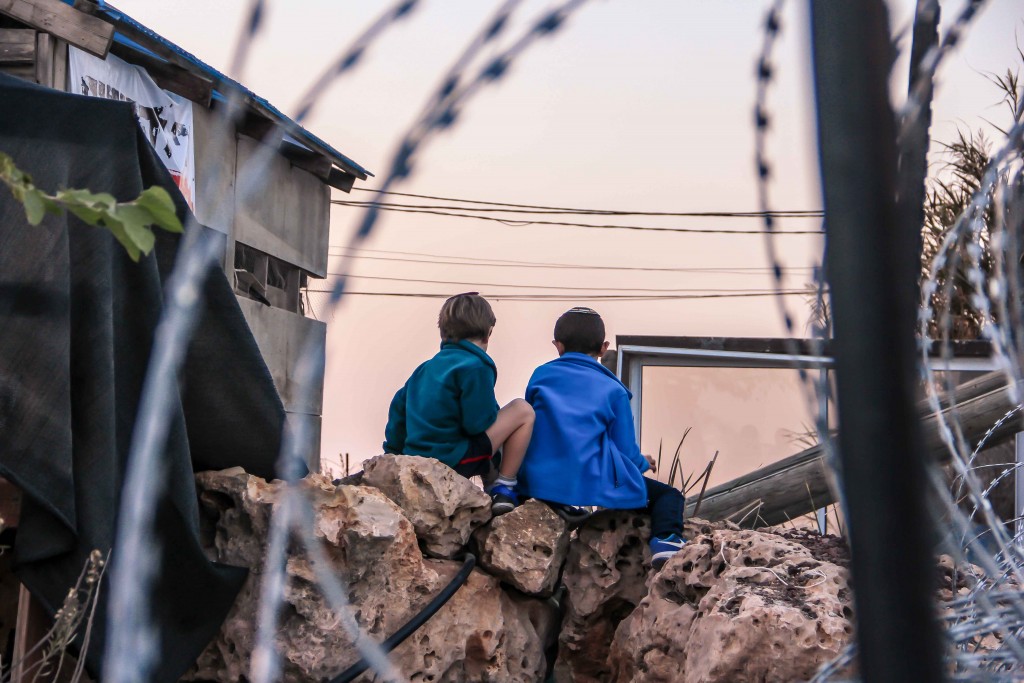 Children relax near the barbed wire the residents placed in an effort to protect their homes…from their own soldiers. (Laura Ben-David)
About the Author
Laura Ben-David is a photographer, public speaker and Israel advocate. Inspired by her Aliyah experience, Laura began writing and never stopped. She is the author of the book, MOVING UP: An Aliyah Journal, a memoir of her move to Israel. She has spoken all over the world about Israel, Aliyah and other topics, often with beautiful photographic presentations. Formerly the head of social media at Nefesh B'Nefesh, Laura is the director of marketing at Shavei Israel as well as a marketing consultant.
Related Topics
Related Posts
Comments