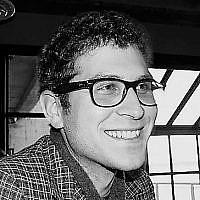 The Blogs
Joel Finkelstein
Apply for a Blog
Please note that the posts on The Blogs are contributed by third parties. The opinions, facts and any media content in them are presented solely by the authors, and neither The Times of Israel nor its partners assume any responsibility for them. Please contact us in case of abuse. In case of abuse,
Report this post.

As Laurel Grauer faces down cries of “oppressor” and “colonialist” at the Dyke March in Pride Chicago, her rainbow flag, adorned with a star of David, trails sadly behind her as her escorts drive her from the chanting crowd. She isn’t alone this year. Three participants in total, each with the fabulously multicolored, ancient Jewish symbol face seething hostilities and undergo forceful ejection because, as the organizers later explain “ the event was a pro-Palestinian and anti-Zionist one and… the flags made people feel unsafe.” Furthermore, the organizers continue, Israel’s efforts to establish equal rights for LGBTQ members of society comprises a form of “pinkwashing.”

What does this notion of pinkwashing really mean? How does it reflect on Jewish identity in the obscure labyrinth of modern identity politics? Pinkwashing, first and foremost, constitutes a shameful psychological projection: the powerful and oppressive Israel protects its gay citizens strictly as a window dressing intended to obscure the continued oppression of powerless, innocent Palestinians. Yet Israel’s support for gay rights places it as the only country in the entire Middle East where LGBTQ individuals have protected rights. The single largest pride parade in the region happens in Tel Aviv and brings tens of thousands of people internationally to Israel to celebrate the LGBTQ cause. To argue therefore, that Zionism makes LGBTQ individuals “unsafe” is an impossible argument in a region where the only island for their safety emerges through the Zionist project itself.

Given these facts, projections of “pinkwashing” from the LGBTQ community traffick hostile projections of anti-Semitism under the veneer of pink indignation. Here, the all-powerful Jewish hostility toward oppressed “others” must disguise itself and this describes the true motivations of the Jewish state in protecting gay lives. Those motivations couldn’t aim to protect civil life and human rights, because only non-evil entities that resemble recognizable and humane societies do that. Thus, in the projection of “pinkwashing,” Israel stands as the unique and supreme exemplar of moral failure. This shouldn’t surprise the careful observer, because the Jew always occupies this projection, and of course, Israel is the Jew of the nations. That pinkwashing employs that projection as a starting point appears true on its face: the use of that term applies to one, and only one nation (spoiler alert: it’s the Jewish one). The irony of this result might make Orwell chuckle in his grave, but accusations of pinkwashing secretly serve to pinkwash anti-Semitism.

Yet even as groups like the Dyke March call for solidarity with the Palestinian cause, call Zionism an oppressive movement and yell about their “unsafety” in the presence of its symbols, something even more sinister than anti-semitism lurks in their “solidarity” itself: suicidality. The LGBTQ community can only purchase true solidarity with Palestinians if they suicidally forgo the existential purpose of their cause: protecting gay lives and rights. The Arab world, and especially the Palestinian world excel in their aim to destroy gay life. In Gaza, homosexuality earns a death sentence that Hamas uses to tyrannize their own people with zeal, even at the highest levels of command. In the West Bank, gay life and advocacy meets with violent persecution and terror.

But, of course, here again we witness the Orwellian inversion of pink-washing projections. If Jews are an oppressive exemplar of moral failure, then their victims must be perfect saints. This is the racism of low expectations. In this fantasy, it would seem that Palestinians transform into infants who by no means deserve to be held responsible for the worst of their offenses. It remains unclear what else could possibly motivate the LGBTQ community to forgive the genocidal aspirations of the Palestinian pan-Arabist movement toward the very gays, lesbians, transgenders, bisexuals and queer people who now march in “solidarity” with them. Unless the LGBTQ community calls out, with great vigor, the Arab world’s criminality and terror against gay life, they identify with it, because the delicious self-righteousness of solidarity never comes without paying the full and bloodied dowry of identification. Without honest conversation, members of the LGBTQ community who level accusations of “pinkwashing” express tacit approval of those sentiments themselves. The dowry: the tolerance of genocide for homosexuals, will come eventually.

Therefore, even as accusations of pinkwashing serve as thinly veiled manifestations of anti-Semitism, they simultaneously “brown-cloud” sentiments of homophobia. Groups such as the Dyke March “brown-cloud” homophobia when, to quote Maajid Nawaz, they dismiss all moral concerns “if a brown person happens to express a level of misogyny, chauvinism, bigotry, or anti-Semitism, even as they hold other white people to universal liberal standards.” Note that in this racist projection, not only does homosexual genocide become brown clouded by victim worship, Zionism is falsely cast as a “white,” “European,” “colonial” endeavor, ignoring the obvious fact that Jews hail from the Middle East and have never historically been called “white” in any meaningful fashion.

In their recent public statement about the incident, the Dyke March clarifies this exact racist posture when they argue that “Zionism is an inherently white-supremacist ideology.” This is an impossible lie that whitewashes Jewish indigeneity and erases Jewish identity itself. Zionism stands as the indigenous rights movement of the Jewish people, who constitute a historically dispossessed Middle Eastern ethnic group and endeavor to escape from white colonial supremacy and Arab colonial supremacy alike by returning to their native land: Israel. In this homeland, Jews welcome gay life and the life of all who seek protection and in turn protect civil society. Jewish participation remains a historic boon to gay rights in America and globally, and this truth demonstrates itself in the Jewish state. She alone commits to the protection of the LGBTQ cause in the region of the world most hostile to it.

For their support, the Jewish community deserves the solidarity and allyship of the LGBTQ community in turn. Jews should therefore call on Chicago Pride, and the broader LGBTQ community to condemn all of those who pinkwash anti-Semitism, brown-cloud homophobia and whitewash Jewish identity. In the face of Jewish courage to protect LGBTQ life, the sentiments of the Dyke March give full throated voice to a colonialist, supremacist cynicism that stands beneath contempt. When we inspect it more closely, the double standards in that cynicism threaten not only Jewish life, but civil society and the LGBTQ cause itself.

About the Author
Joel is a psychologist and neuroscientist, entrepreneur and writer, with diverse pursuits, ranging from crypto-currency to philosophy of mind, and the relationship between technology, virtuality and the ethics of a self.
Related Topics
Related Posts
Comments