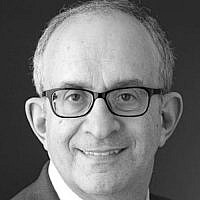 The Blogs
Alan Kadish
Apply for a Blog
Advertisement
Please note that the posts on The Blogs are contributed by third parties. The opinions, facts and any media content in them are presented solely by the authors, and neither The Times of Israel nor its partners assume any responsibility for them. Please contact us in case of abuse. In case of abuse,
Report this post.

For European communities in the Fourteenth Century, the Black Death was devastating. But for the Jews of Europe, it was even worse, because in addition to the plague, there were four years of persecutions and massacres that resulted from being blamed for the spread of disease. As history has shown us time and again, those suffering are often quick to find a scapegoat for their problems, and the violence that befell the European Jews from 1348 to 1351 was one of history’s starkest lessons.

Jews have historically been blamed for diseases, and even recently that’s been the case. In an OpEd last year, I asked, “When did the measles become Jewish?” Campaigning for vaccinations at that time—as most physicians and rabbis were—was further necessitated to combat a media frenzy that focused on the measles outbreak in various observant communities. But what made the matter worse was when a tiny but disproportionately loud number of self-proclaimed spokespeople for the Jewish community joined the dangerous and ill-informed anti-vaxx movement.

More recently, when certain headlines proclaimed the novel coronavirus “the Chinese virus,” I shuddered. I knew full well that racial labeling could quickly lead to anti-Asian sentiments that might turn violent. I’ve been saddened to already read some of those stories.

Unfortunately, history has taught that it is only a matter of time before Jews are blamed, too, regardless of how farfetched those accusations might be. I recall saying, albeit half-seriously, “If the cure for COVID-19 comes from Israel, some will say Israelis spread the disease to sell a vaccine.” Consequently, it was a shocking non-surprise when Hollywood actress Rosanna Arquette tweeted that Israel “has been working on a [coronavirus] vaccine for a year already” and has put “lives at risk for profit.” While Arquette subsequently deleted the Tweet and apologized, one can imagine, in the age of social media, how many people read that sentiment, shared it, and believed it.

A story on March 4 in The Washington Post described how the first Coronavirus case in New York came from a Jew. It’s not hard to imagine how that story is retold by those who already hold antisemitic feelings.

Last year saw a dramatic rise in anti-Semitic attacks across the globe, in the U.S., and in New York in particular. We tend to forget that now, as borders are closed, as whole communities are quarantined, and as Governors contemplate sheltering in place for the populace of entire states. But the omnipresence of anti-Semitism in certain quarters has not receded. Indeed, it was only three months ago, on December 10, 2019, that a shooting took place at a kosher grocery store in Jersey City where the perpetrators had allegedly planned an attack at a Jewish pre-school. It was less than three weeks later, on December 28, the seventh night of Chanukah, when a masked man entered a shul and proceeded to stab congregants.

Like any plague, the Coronavirus is here to test our resolve and impart strong lessons. While we may not understand precisely what those lessons are, we must certainly know that we are tasked—each and every one of us, and the Jewish community in whole—with rising to the occasion. Does that mean bringing children back from Israel who are studying there? Or not inviting Bubbie and Zadie for Pesach because we don’t want to risk infecting them? These are matters that must be carefully considered.

Minimally, we must work to save lives, especially when all that is called for is adhering to common-sense hygiene practices and inconvenient but understandable social distancing. Minimally, we must act as our Torah dictates: as role models. Our rabbis across the world have made it clear that congregating at this time endangers lives. Sadly, when we ignore these edicts, we wake up to headlines in The New York Times regarding a Jewish wedding being broken up by the fire department by orders of the Governor. Our people are not the only ones who read such stories.

Disregarding health officials and rabbis has never been in the interest of the Jewish community, and now is a time to take our personal and communal responsibilities deadly seriously.

About the Author
Dr. Alan Kadish is president of the Touro College and University System. He is also a renowned cardiologist.
Related Topics
Related Posts
Alan Kadish
Comments