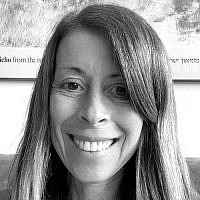 The Blogs
Rachael Wurtman
Apply for a Blog
Please note that the posts on The Blogs are contributed by third parties. The opinions, facts and any media content in them are presented solely by the authors, and neither The Times of Israel nor its partners assume any responsibility for them. Please contact us in case of abuse. In case of abuse,
Report this post.

I am in pre re-aliyah limbo. The countdown has started. Days sprint past at a breathtaking pace.

Flooded with memories, I package them in airtight containers and store them. The first time my small Jerusalem sabras kicked piles of orange autumn leaves. Passover seder with close friends. My graceful 10-year-old performing in a dance recital,  while my 3-year-old hid on the wings of the stage. Their sister’s speech at her high school graduation. And so many more.

My heart wakes up in Jerusalem but I toss and turn at night in Boston.

My Zionist dream was smashed into fragments in 1996 when I learned that my toddler would not survive her serious health condition if she stayed in Israel. Doctors at Children’s Hospital Boston saved her life. And I served my time.

I stared at murals in crowded waiting rooms in specialists’ departments and waited for administrative assistants with clipboards to call our names. I leaned my elbows on metal armrests on parent chairs and watched my children squirm , shoulders poking through torn paper gowns, on black sticky examining tables. Specialists leaned over , peered closely, and ordered invasive procedures. Hours passed slowly during many nights in pediatric emergency rooms. The 4 AM intense lighting and cacophony of aversive sounds and smells kept me alert. 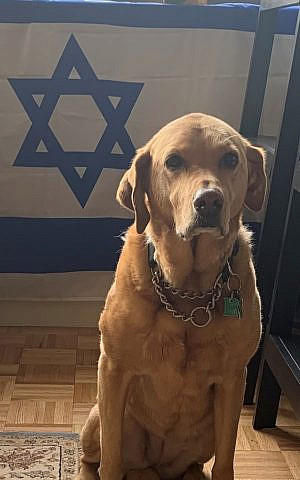 The children grew taller and left home to pursue their passions. One morning, the aging Labrador Retriever and I gazed at each other . We listened to the silence and realized our work was complete. It was our turn.

I went on a quest to discover whether my relationship with Israel could sustain a separation of 24 years. Three visits ensued.

I gazed into the Mediterranean and explored shady boulevards and sculpture parks. I clasped the jutting boulders of the Kotel and sat on a curb in Mahane Yehudah to listen to a street musician. I retraced miles through familiar neighborhoods until the streets of Rehavia and Old Katamon matched the map engraved in my mind. Friends and family – and in my Israel they are the same- shared stories and warmth.

This March, Jerusalem wrapped her arms around me and told me it was time to come home. I flew back to Boston, retrieved my Labrador from her sitter, and announced to friends and family that I was going home.

Undaunted by the pandemic , I made lists and more lists and penciled in final doctors’ appointments and a dog check-up and asked Israeli friends for references for shipping companies. I listened to Galei Zahal and squinted at Ynet Hebrew’s tiny font.

I was in denial about the  14-day quarantine . There were very few cases of coronavirus and the country was quickly opening many sectors of the economy.

I could not imagine spending even 5 hours in quarantine. A long distance runner,  I require daily exercise.

But ‘we plan and G-d laughs’, according to the Yiddish proverb. It soon became apparent that something larger  in control. I tried to renew my US Passport. An agent said it would take quite a few months. Too many to enumerate.

Try to plan a flight for a 65 pound dog from Boston to Tel Aviv during a pandemic.  British Airways classifies her as ‘cargo’. The cost is inordinate but she will relax in style, in a London dog lounge.  But the reservations agent warned that cancelations are frequent.  Until November, KLM has an embargo on dog travel; after November, the airline has to ‘approve ‘ her before I buy my nonrefundable ticket. Lufthansa will disconnect your call after a few minutes.  El Al is temporarily unavailable.

The dog has geriatric issues. 10 days before we travel, she requires a health certificate declaring fitness to fly.  As if that were not anxiety-producing enough, the form has to travel to Albany and back before the trip.

While I was planning and gathering information, Boston’s corona cases were peaking to terrifying heights.  Some friends dialed hotlines multiple times, only to learn that their incipient corona symptoms were induced by anxiety.

Until recently,  Israel represented safety. There were few cases and life was returning to normal.

Some people turn to the Dow Jones or the weather forecast, while sipping their first morning coffee. I check the Times of Israel corona news.

Does it matter who is sick: should I try to predict my probability of catching or surviving corona, by comparing myself to people described in the statistics? And then what? If I get sick, am I better off in Boston or Israel?  I have friends and a daughter in each. It is hard to say which is better.

Should I consider delaying my departure if Israel’s corona surge gets much worse or if travel appears more risky? Will flying ever be completely safe, during this pandemic? If Israel is under lockdown, and I am in quarantine, will I be able to get groceries delivered? Will I be able to find a dog walker, or someone to take her to a vet, in an emergency?

Being in limbo right now is like walking on a tightrope.

I am standing on the rope by myself. I can make it to the other side or I could fall off. I  see a few feet in front of me. If I look too far ahead, I will wobble and the rope will shake. I extend my legs and point to a target a few inches away. Gingerly, I shift my weight, one step in front of the next.

About the Author
Rachael is a journalist who lived in Jerusalem between 1987 - 1996. She writes the ‘Inclusion Matters’ column for the Jewish Advocate and articles for Honest Reporting. She has blogged for Jewish Boston, Friendship Circle and the Parent Professional Advocacy League. A former attorney, she has a master’s in child development. She was an early intervention specialist and special education advocate.
Related Topics
Related Posts
Comments