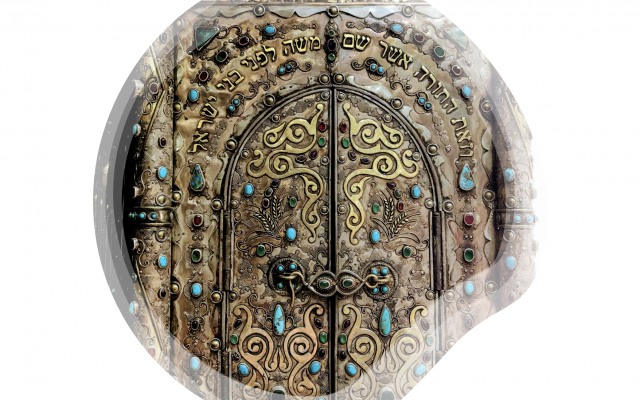 I wanted to share an amazing story that happened to me from this last week. Periodically, like many people, I experience bouts of terrible back pain. It started up again about a week and a half ago, and I found myself supporting myself with a cane that I keep handy for just these miserable occasions.

I found myself outside sitting on a park bench with my daughter and she was asking me why I didn’t get medical help for my back. I started to explain that I had seen a number of specialists, and they told me that they could possibly operate, but that there was a one in a hundred chance that I would end up paralyzed. Just at the precise moment that I uttered those words, a strange man with a cane just sort of appeared in front of us, and he turned and wished us a Shabbat Shalom. Then he proceeded to walk away down the path and over a little bridge.

However, before long, this Jewish man comes back our way and stops in front of our bench where we are still sitting. He says to me:

My name is Reuven. I overhead you telling your daughter what the doctor said to you, and I had to come back and tell you that that I was in complete shock. Precisely fifty years ago, the doctor told me the exact same thing about having a one in a hundred chance of paralysis if they operated. So, what did I do? I went to see the Rabbi (Avigdor Miller) and ask his advice, and the Rabbi says to me:

He smiled in a knowing fashion on the wisdom of that and held up his cane for a moment showing me that he is still going on without the operation although he does still have bouts of back pain. He tells me I too am doing the right thing, and once again disappears suddenly down the pathway. Honestly, I wasn’t sure for a while after that whether this was a man or perhaps an angel that had so mysteriously appeared with his message at such a precise moment.

Today, the message about taking the odds was amplified during the speech in Shul, when the speaker, Avraham (a Breslow Chasid), asked:

Why is that that we find “religious” Jews that do bad things?

He described how these Jews may wear all the religious garb, cover their heads, go to synagogue to pray three times daily, and are seemingly observant of the Mitzvot (commandments), but yet they get caught for cheating in business, indecency with children, domestic abuse, tax evasion, etc. It was like he was pointing out the stark contrast between people choosing not to play the odds with their physical health, but yet they do gamble and play the odds when it comes to their spiritual health.

The answer to this religious hypocrisy, he explained, is that:

Judaism is a big space in which we live and in that space, there is plenty of room for Jews to act like jerks!

That’s why in this week’s Torah Portion, Kedoshim, G-d tells us the capstone, all-encompassing mitzvah, the proverbial 614th commandment (there are only 613 specifically in the Torah), to “Be holy” (Leviticus 19:2):

In other words, regardless of all your other observance of the Jewish and civil laws that outwardly may make you appear like a good and “kosher” person, inside you need to be holy.

Avraham, repeated again and again: “Be holy!” And I left the synagogue saying those words over and over again to myself. Then I suddenly remembered the words that Reuven told me from the prior week that the Rabbi told him about the odds of paralysis and that Jews don’t take those odds. And I thought to myself while Jews don’t take those wild odds (1 in a 100 of paralysis), why do they play the odds with their souls by pretending to be religious on the outside, but on the inside and away from human eyes doing evil?  Surely, we all know that G-d sees everything and that a faithful judgment awaits us all. And it all made sense not to play the odds not only with our physical health, but also with our spiritual wellbeing.

After the services, at the kiddish, this message of doing right in life sank in further and more practically. We sat with an old lady in her nineties. And she told of all these troubles that she has with her home, contractors, finances, and health. Someone at the table asked her directly but politely, “don’t your children help you?” She grimaced and responded with a sort of exasperated look on her face and knowing that she was about to reveal too much. Yet, after a brief pause, she continued and said that her daughter lives three blocks away and doesn’t do anything for her, and her son lives three miles away and she has never even been in his home, and she wouldn’t recognize his two children (her grandchildren) if she even saw them. When the others asked her why this was, she bemoaned further that when she got divorced that she had worked three jobs just to support these children, but that they had basically abandoned her in her elderly life.

While everyone sat around the table sort of dumbfounded at this story of a broken family and the neglect and pain that resulted, the people proceeded to tell her how they felt sorry for her and of course, offered any assistance. Interestingly, this story came to light while the Torah portion this week specifically sets forth the laws of both charity and honoring one’s parents. Who would know that while everything looked good on the outside with this woman and her family that on the inside, they were playing the odds of wrongdoing that she lamented about today in synagogue? In short, despite all the commandments we have that guide us to do right, the final words to me are really the ones that kept running though my head: “Be holy!” and the Rabbi who said, “A Jew doesn’t take odds like that.”