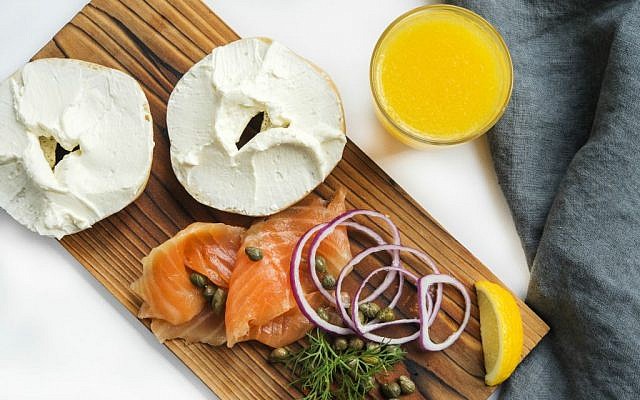 Bagels aren't just Sunday affairs in the Big Apple, where they are routinely eaten every day of the week. (Courtesy Black Seed Bagels)

The cultural appropriation police are working hard again – this time battling white-owned restaurants in Portland, Oregon. This latest scandal started with Kook Burritos, a food truck run by two white women, and has now extended to a Google Doc (could we dare call it a blacklist?) of “white-owned appropriative restaurants“, calling it out as “culinary white supremacy”.

Cultural appropriation is when one culture adopts elements of another culture, particularly when it is done without due respect and acknowledgement and/or when it is being done by a dominant culture over a minority, oppressed or colonised culture. It applies to such things as food, fashion (clothes and hairstyles) and even the names of sport teams.

Yet we don’t hear much about cultural appropriation case when it comes to Jewish culture and traditions, despite us being a minority culture with a long history of being oppressed. We don’t call out non-Jewish food outlets for serving bagels, gefilte fish, chopped liver and herring without due respect. We are mildly amused by the fascination with kabbalah and tattoos with traditional Jewish phrases (especially considering tattoos are biblically prohibited), and we were somewhat annoyed by Madonna’s use of tefillin in a music video, but we got over it.

Does that mean the cultural appropriation movement is only about Blacks, Latinos and Native Americans? It’s not as if Jews are white, whatever that actually means. While we can be confident that the Forward will find a Jewish angle to everything that happens in America, why are we not as protective of our culture as other minorities?

Perhaps it’s because the diverse Jewish world has already done a fantastic job of evolving, interpreting and reinterpreting all aspects of Judaism — intellectual, spiritual and cultural — often being influenced by the culture around them. Experience has shown that this has only enriched Jewish life rather than diminished it.

Unlike other minorities, we don’t view Jewish culture as our intellectual property, to be protected, defended and kept intact at all costs.

We have found a wonderful way to both assimilate into our respective host countries and at the same time stand out, influence, and “punch above our weight”.

On Shavuot, we celebrate the mass revelation of God to the entire Jewish nation — millions of us — at Mount Sinai. The Torah and Judaism is God’s gift to us, His people. It is a beautiful and complete gift that includes an ethical and legal system, an approach to God and the world, and an implicit mission. Our mission is to make the world a better place, and in order to do that, we must share the gift that God gave us with the world.

We gave the world a weekly day of rest, the importance of caring for others less fortunate, and the dream of a better future. We gave the world bagels and lox, pickled herring, and cholent. And we have much more still to give.

So please, appropriate our Jewish culture.