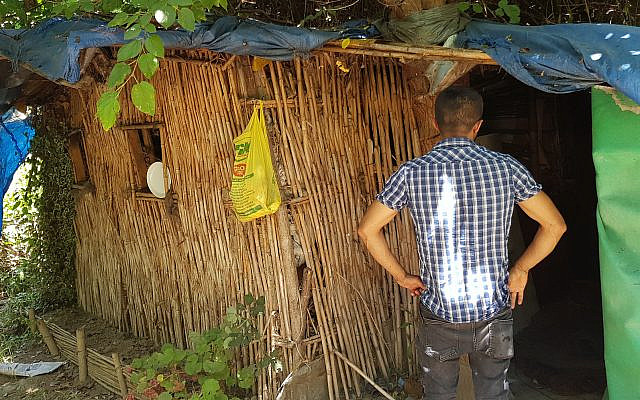 During his fieldwork in 2019, the author took this image of a self-built cottage in a forest in Rome's outskirts that the Kurdish asylum seekers use for their self-accommodation!

For several days, the European and international media have been reporting on the predicament of asylum seekers; straddled along the border between Poland and Belarus. Every day, streams of footage which showcase the plight of the asylum seekers, are posted on various social media platforms with the hope of getting our attention and generating a response. What is most striking from the scenes that are emerging is the extremely miserable conditions and the abhorrent treatment that humans have been subject to. Asylum seekers; men, women, children and the elderly, face starvation, the cold weather, and mistreatment at the hands of Belarusian and Polish police officers. Ten asylum seekers have already succumbed to these precarious conditions. Moreover, at least 27 asylum seekers crossing the channel between the UK and France drowned last month.

Yet, there is no country that is ready to receive these asylum seekers who are predominantly Kurds and Yezidis. The predicament of these Kurdish and Yezidi asylum seekers is reminiscent of the dilemma of the Jewish refugees in the 1930s and 1940s who lingered on ships or at borders moving from one state to another, but none of states accepted them. Whilst Kurdish asylum seekers, as Jewish refugees in the past, have been struggling to find refuge; and have literally been struggling for their lives to survive, European and British leaders, and politicians have been working with the governments of Belarus and Poland to secure their own borders to build up fortress Europe, as well as fortress Britain. The plight of these individuals has failed to capture the attention of European and British decision makers who have been more interested in addressing common measures to protect borders from asylum seekers. Asylum seekers; who are fleeing the risk of death in their homelands – have been abandoned to their fate and now again dying, this time on Europe’s or Britain’s doorsteps. What leads to this refugee predicament?

The authoritarian regimes in Minsk, Moscow and Ankara have played a crucial role in luring asylum seekers and trafficking them to Belarus with tourist visas. According to the German Bild newspaper, asylum seekers have been transported on Russian and Turkish airlines via Istanbul and Moscow. A footage has also shown asylum seekers at Damascus airport enroute to Belarus. Using their national airlines, these regimes seem to have coordinated the trafficking of innocent people via Damascus, Moscow, and Istanbul. However, the weaponization of innocent people is not a new occurrence, as members of the international community have used these methods against rival or conflicting state(s) before. Last year, the Turkish government used asylum seekers against the EU who were trafficked to the borders of Greece. The lives of asylum seekers are not the main concern for not only human smugglers and traffickers, but also governments. Asylum seekers face sinister policies of authoritarian governments, humiliating practices of criminal smuggling networks and extortionate smuggling and trafficking fees for the hope of transportation to a safe haven. What should be questioned, however, is the conditions that create the opportunities for smuggling and trafficking.

Corruption, Civil War, and Islamic Terrorism as Driving Forces behind the Production of Kurdish Immigrants

Two factors play into the hands of traffickers and smugglers. The first of these is the corruption and civil war in departure countries which asylum seekers have been escaping from. Secondly, the approach of Western governments to development within these countries. The majority of asylum seekers at the border of Poland are from the Kurdish regions of Iraq and Syria. These asylum seekers are escaping the conditions created by the corrupt national and regional authorities, and the recent attacks of ISIS. However, it is not only domestic conditions which make it difficult for people to live their lives safely. Syrian and Turkish state actions have destroyed the prospects of a dignified life for Kurdish, Yezidi, and other local populations. Kurdish and Yezidi asylum seekers, who have shared their frustrations on social media, have cited nepotism as a significant cause in leaving their home countries. This has led to corruption, causing the precarious conditions that they have had to escape. Furthermore, they have complained about the poor conditions and failure of the authorities to pay the salaries of civil servants who work for local and national authorities. A woman claimed that her husband had not received his salary as a member of the Peshmerga forces for many months. This had impacted their ability to survive, preferring to live in a moldy tent in Europe than face the unbearable conditions in their homelands.

While corruption and the economic situation have been a crucial factor for displacement; especially in the Kurdistan Region of Iraq, what cannot be understated is the impact of the anti-SISI war in the Yezidi region and the renewed military operations of the Turkish army. In Kurdish Rojava in Northern Syria and Kurdistan Region of Iraq, there is no day passing that the Turkish military kill Kurdish and Yezidi children, women and elderly people with missiles from the air and ground. According to the Turkish authorities, another military operation of the Turkish military with their radical-Islamic groups against the Kurdish towns and cities is imminent. This threat causes fear among Kurdish civilians who do not have any choice but to leave their homeland and take the deadly journey to Europe. Since these developments, they have been living in refugee camps under poor conditions as regional and national governments collapsed and or failed to cope with the humanitarian crisis that ensued. The failure of rebuilding the infrastructure necessary for life to continue left these people with nowhere to go, nowhere to call home

European decision-makers choose to remain ignorant about the sources of refuge despite the plethora of reports from non-state actors, journalists and asylum seekers themselves. The destruction of Kurdish towns and cities, spanning from the Yezidi region of Sinjar in Iraq to the Kurdish town Efrin in Syria at the hands of ISIS, the Turkish government and counterattacks from the international coalition has made the existence of Kurdish and Yezidi people difficult. As soon as ISIS was militarily defeated, European states ignored its repercussions and provocative activities of the Turkish state. Turkish politics in the region has destabilised the already fragile regions further and has led to more refugees. Nevertheless, European governments continue to support the Turkish regime as a way to protect EU borders from asylum seekers despite Turkish actions of ethnic cleansing and displacement of indigenous communities. This was due to the fact that Turkey would hold refugees and stop them from crossing into mainland Europe. However, most European governments have even refused to take ISIS prisoners who are citizens of their countries, passing these as problems for the local authorities. They evaded responsibility for not only the ISIS prisoners but also rebuilding the demolished cities and towns. By ignoring refugee sources, the politics of European states in the region contributed and continue to contribute to the production of many asylum seekers who are now stranded at the Polish and European borders or died while crossing the English Channel. Unfortunately, the tragedy of these asylum seekers might not be the last failure of human morality if European states fail to adopt a more decisive, responsible and humanitarian politics against authoritarian regimes in the regions from where most asylum seekers originate.