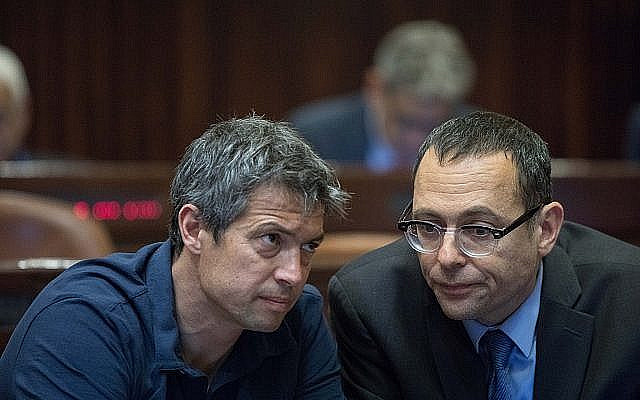 Israel’s politics are so complex that one should treasure those rare occasions when the stars align to make things clear: three Knesset members have stolen the election.

The treacherous trio are soft-right veterans who over the years fell out with Benjamin Netanyahu and were tempted over by the center-left in a bid to attract votes from their former cohort. That was not the cleanest move in the world, but it’s nothing compared to the Sodom and Gomorrah that is Likud politics since Netanyahu took the party over. And here’s how it worked out: first, the three failed miserably in their task; then, under cover of corona, they basically transferred their misbegotten Knesset seats back to the right.

It’s such a fine line between doing your job and doing the opposite of your job; perhaps one gets confused.

Let’s meet them, then, shall we? The pickpockets are Orly Levy-Abekasis of the Labor-Gesher-Meretz list, and Yoav Hendel and Zvi Hauser from Benny Gantz’s Blue and White. Levy, whose stupendous self-regard exists in inverse proportion to her true political worth, received but a handful of votes in her native Beit Shean. Compared to her the deceitful duo are more elegant and urbane, but their achievements were equally meager; if anything Hendel caused damage by appearing to disrespect Middle Eastern culture in an interview, stepping into a pile of dung that awaits some leftist klutz in each election cycle.

In a way, the center-left suffered a not-undue comeuppance for the artifice of ever running with the three. The inartful appeal to the other side smacked of desperation and dishonesty and underrated the peril of repelling one’s base by muddling one’s message. It was possibly a net loss relating more widely to Blue and White’s timidity about presenting a clear ideological alternative. Instead it put on a dog-and-pony show for a soft-right electorate that never came.

Note that without Avigdor Lieberman’s 7 seats, which were formerly part of the right but have abandoned Netanyahu because of secularists’ conflicts with the religious fanatics in his base, the result of the past year’s three elections was about the same as in 2015 – despite three generals leading the opposition and three counts of corruption facing Netanyahu in court. It is mind-boggling.

Speculation that the three might defect began on election night on March 2, when it became plain that Netanyahu lacked the 61 seats to cling to power, but according to exit polls might have managed a 60-60 tie. Yet the final count provided the center-left, with its Liberman reinforcement, with 62 of 120 seats, all from parties that ran on a clear platform of replacing Netanyahu. Where I come from that’s called a defeat of Netanyahu.

The opposition to him goes beyond the usual political issues involving the Palestinians and the role of religion. Netanyahu is presiding over the Putinization (or “Erdoganization” if you prefer) of Israel and the idea that he should continue in office while on trial for bribery seems on the face of it insane. The opposition to him among what I am convinced is a strong majority of thinking Israelis is at radioactive and even Trumpian levels.

Gantz had the choice of breaking one of two election promises.

In mid-March, a few days after being tasked by the president with forming a government, it looked like Gantz had finally chosen and chosen wisely: he would form a government based on his own bloc of 62 — as most of that bloc’s voters surely wanted. Removing Netanyahu would be an ecstasy for them. And a coalition including or at least backed by the representatives of Israel’s Arab minority would be a breakthrough for the healing of a gangrenous wound as old as the state.

And that’s when the heist began. First Levy-Abekasis stopped taking calls and tweeted that she would not support the move, contradicting her own assurances during the campaign. And then Hauser and Hendel announced they would not support it either – and Gantz’s majority appeared to evaporate like so many votes for the opposition in Russia.

Last Thursday Gantz meekly joined forces with Netanyahu, and according to reports a deal on a unity government is near. That caused the immediate break-up of Blue and White, with two factions (dominated by Yair Lapid’s Yesh Atid) slamming the door amid bitter acrimony.

The implosion of Blue and White leaves the opposition to Netanyahu again splintered – a shocking and dispiriting outcome that is a major prize for the prime minister.

Gantz has been called worse names in the days since by outraged ex-supporters on social media than by Likud during the campaign – and Likud ran one of history’s dirtiest campaigns. Can he be forgiven?

According to the emerging deal Netanyahu would stay in place for 18 months and then hand the premiership over to Gantz for an equal period. It is almost amusing to observe that almost no one believes Netanyahu will honor this promise; I’m not sure Gantz himself does.

Lapid accused the former military chief of “crawling” into Netanyahu’s coalition. I appreciate his horror at the prospect of Netanyahu staying on (and perhaps even machinating further delays to his trial), but it does look like Gantz got quite a package.

That reportedly includes cabinet parity with an equal number of ministers (one for every lawmaker who actually comes with Gantz, it seems), including key portfolios like defense and justice. Furthermore,  a coalition not dominated by Likud will probably not carry out the horrors that gang had planned, like legislation to override the supreme court. And if Gantz is wise he can use his platform for much good, like perhaps appointing an Arab minister, or even openly campaigning for peace. Why not? Does he really need to care about not offending his deplorable “partners”?

Gantz himself offered a spirited defense of his action on these pages, portraying it as a sacrifice at a time of national crisis, and promising to stick by his principles.

I think he means well. But it does look like he needlessly rushed, and I see a far better option: Strong-arming, brow-beating and bribing his rebels back into line (make Hauser president and name a settlement after Hendel); convince these racist purists that the path is first a government that indeed depends on the Arabs, but that as soon as Netanyahu is gone Likud would be invited in as well. Let’s see that mafia refusing cabinet seats.

There is so much good that such a path could have achieved that its premature and unnecessary abandonment seems inexplicable, unless Gantz viewed the corona crisis as an irresistible force majeure conjured up by the fates for the lucky general in power.

Netanyahu has been holding near-daily TV events in which he messages the pandemic as the greatest calamity since the biblical flood and markets himself as a human Noah’s Ark. Israel’s irresponsible media broadcasts this dutifully and troubles itself little with the systemic unpreparedness and the fact that the health minister (seemingly chosen like most of Netanyahu’s Cabinet for his pinpoint lack of qualification) does not believe in the supremacy of science.

The spin machine is working overtime to convince people that you don’t switch horses in the middle of a crisis. And that another election — the result of both sides holding out — would be an unacceptable calamity.

If the tables were turned Netanyahu would never for a second have been distracted by any of it, and frankly neither would I. But Gantz must have chosen what he viewed as the least-bad option.  I have sympathy for that, as a person who often defends the otherwise indefensible – like democracy – on those very same grounds.

But that would only be true if there was absolutely no option for removing Netanyahu without a fourth election. Therefore the key to vindicating Gantz’s odd decision is whether, when faced with the betrayal in his ranks, he did everything humanly possible to put the squeeze on his betrayers.

You know very well what Netanyahu would have done. And who can say? The Faustian bargain is not yet signed and sealed, so it might somehow not be too late for Gantz. 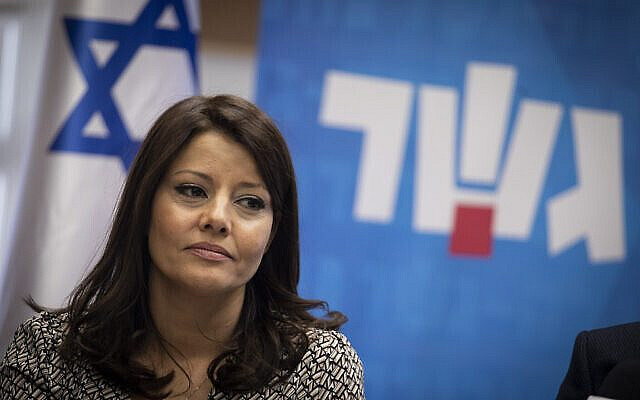 Labour-Gesher party co-chairwoman Orly Levy Avekasis at faction meeting at the Knesset, the Israeli parliament in Jerusalem, on November 11, 2019. Photo by Hadas Parush/Flash90
About the Author
Dan Perry is the former Cairo-based Middle East editor and London-based Europe/Africa editor of the Associated Press, served as chairman of the Foreign Press Association in Jerusalem, and authored two books about Israel. A technologist by education, he is the Chief Business Development Officer of the adtech company Engageya and Managing Partner of the award-winning communications firm Thunder11. His Substack, Ask Questions Later, is available for subscribers at https://danperry.substack.com/. Also follow him at twitter.com/perry_dan; www.linkedin.com/in/danperry1; www.instagram.com/danperry63; www.facebook.com/DanPerryWriter/; and https://muckrack.com/dan_perry
Related Topics
Related Posts
Dan Perry
Comments