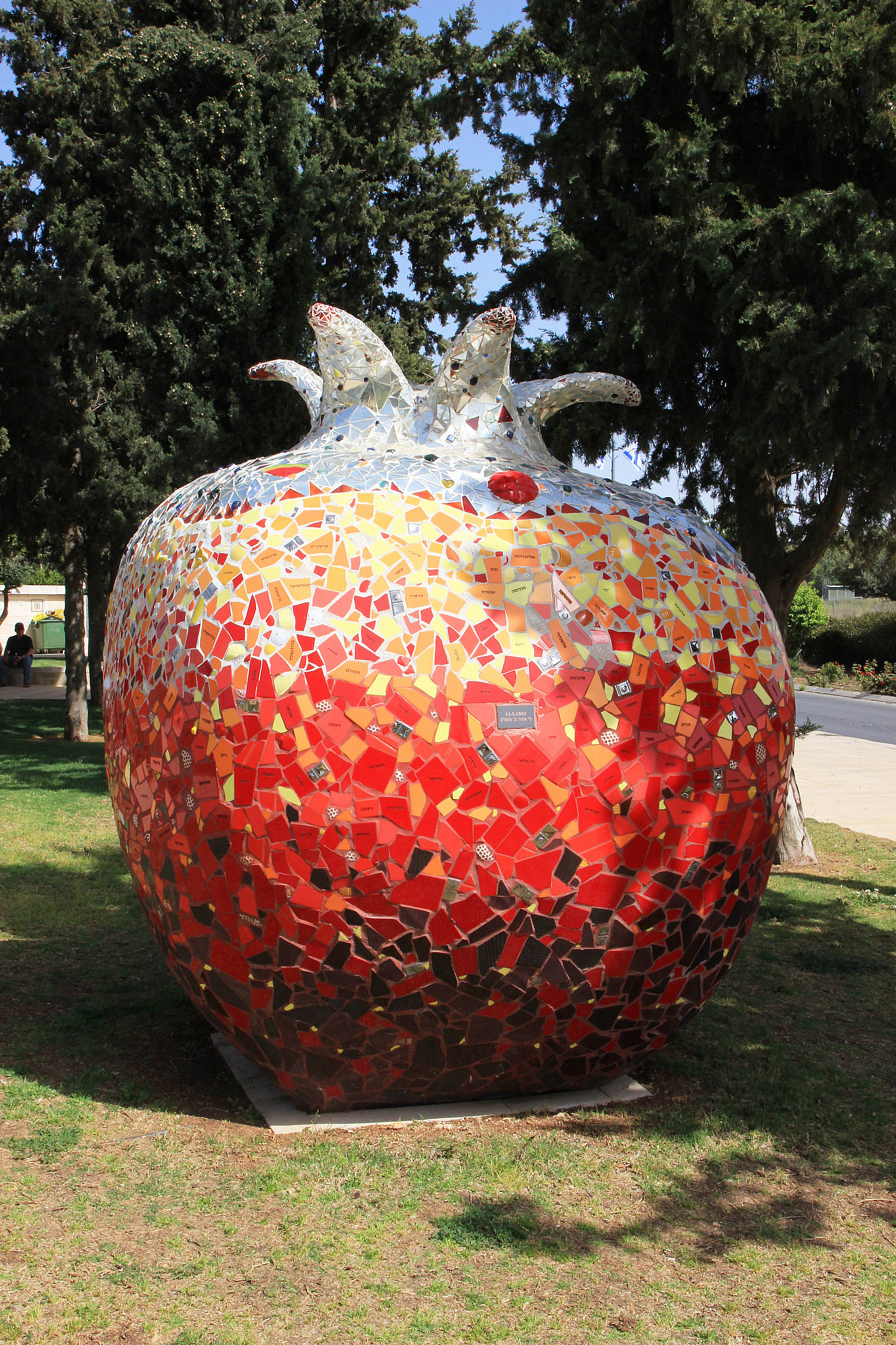 Pomegranate memorial to the Macedonian Jews killed in the Holocaust. Photo by Carrie Hart.

At the end of the Jerusalem promenade, on a grassy piece of land, sits a beautiful piece of art – a large pomegranate, created by Igor Sarni and the Artdi group.  The pomegranate is made, mostly, with pieces of glass and ceramics. It is full of color, and upon first approaching it, there is a heightened sense of joy.

Drawing closer, however, you can see that written on the broken pieces, in Hebrew, are family names.

What will surprise you the most is that this colorful pomegranate is actually a memorial to the 7,144 Jews of North Macedonia who were rounded up on March 11, 1943, taken to a tobacco factory in Monopol, and sent by cattle trains to Treblinka death camp.

Earlier this week, a small group of Macedonians who live in Israel, including a few survivors of the Holocaust, came to pay their respects to those who lost their lives on that fateful day in March 1943. Only 2-3% of all the Jews living in North Macedonia survived.

According to Sarni, “We used pieces of ceramics, and pieces of utilities from home, in order to make clear this break of things. In three places on this pomegranate, we put the date of the deportation, and you can use your phone (with an app) and see the stories – the March of the Living; the story of the community; and a film from Yad Vashem.”

Suddenly, your phone screen turns into a documentary of the history of the Macedonian community. This modern technology is a digital format of Israeli innovation, included in the pieces of ceramic and glass on the pomegranate memorial.

The pomegranate has become a place of remembrance for Israeli families who lost their loved ones in North Macedonia. On each Holocaust Remembrance Day, they can come to the Jerusalem promenade and share their collective memories.

“Remembrance” is a way of honoring those who perished, by those whose lives were spared.

Dan Oryan, current Director of the Balkans region for the Israeli Foreign Ministry, and former Israeli ambassador to North Macedonia, spoke about the seven years that he and many volunteers devoted themselves to preserving the memories of North Macedonia’s Jews.

“The story was actually not told enough. So, we were looking for different ways. We started to clean the old Jewish cemetery in Bitola, with the participation of many. We brought delegations from Israel, from Germany, from the U.S. and from around the world, to take place in the actual cleaning. We told the story of the little community in Bitola.”

Then, Oryan started a tradition called the March of the Living, where Macedonians marched in Bitola every year, around the 11th of March, the day the Jews were deported. This was part of telling the story. With government leaders present, both from North Macedonia and Israel, they also planted trees.

Oryan shared more about one particular artist that was commissioned to create a work of art that is to be eventually placed in the old Jewish cemetery in Bitola. “Mati Greenburg created a sun dial. He was the last Jew born in North Macedonia before deportation. He lives in Israel now.”

Different delegations of artists; Israeli and North Macedonia innovators; youth; people with special needs; and many more joined the ceremonies and the days of remembrance, waking up the international community to what the second and third generation Holocaust Survivors were all too familiar with – loss and grief.

Singing together in one mass event, at the entrance to the old cemetery in Bitola, was one of the collective memories for the people of North Macedonia.

Oryan also led a hackathon in Bitola with 20 mentors and judges from Israel, focusing on the Jewish past. Called “Bitalon,” it included 110 young high-tech oriented youth who came with ideas and projects on how to keep the memories alive of the old Jewish community in Bitola.

Then, Oryan thought about doing something special in Israel — a commemoration in Jerusalem.

“The idea was to have, in a special place on the promenade, a unique statue that would have the names of 280 families from North Macedonia – Jewish families who lived there before the Holocaust. All the family names are engraved on this pomegranate.”

Pomegranates are a symbol of life and fruitfulness. This year, Macedonians living in Israel thought it would be nice to put some flowers in front of the pomegranate memorial, recognizing the fruitfulness of the survivors of the “Shoah” (Holocaust).

Bella Balashnikov shared some of the memories of what happened to her relatives.

“The siblings of my father were two brothers and a sister. Each had four children. The brothers wanted to come to Israel. Someone said, ‘Don’t go to Israel there’s no work there.’ So, they stayed in North Macedonia. Then came the Germans. The Germans took all of them to Treblinka.”

Bella’s father rarely discussed his siblings and their families and what happened to them, so Bella was not aware of the details.

“My father didn’t talk about it. We hardly knew anything. My father, my family came in 1932 to Israel. That is why they survived. They left North Macedonia before the Holocaust. They came as tourists to Israel. You couldn’t get certification to come as new immigrants at the time.”

Bella, who was born in 1942 in Israel, heads up an organization called Vad Sephardim (the Sephardic committee). They are one of the sponsors of the pomegranate memorial. She is happy living in Israel.

“I have amazing children and grandchildren. My son was the Director General of the Knesset (2006-2009), Avi Balashnikov. My family are all professionals.”

This writer spoke with another Israeli during the Holocaust Remembrance Day ceremony for North Macedonia. Her name is Bnenvenita (Betty) Behar Azoory. She was rescued by a Christian businessman who hid her in his home, one day before the mass deportation of Macedonian Jews. He was a friend of her parents.

“My father and the man, Alexander, worked together. The evening before the round-up, he took me to his home. In 1984, I came to Israel after I found out that I was Jewish.”

Rachel Shelley Levi Drummer is an Israeli who was born in North Macedonia. She is well-known for preserving the memories of the Macedonian Jews. She, along with Ambassador Oryan, have been telling the story of the Macedonian Jewish Community in diverse ways, so that it will be applicable and interesting for both young people and for Jews, worldwide.

“In Macedonia, the survivors, today, are concentrated in Skopje. There are no Jews living outside of Skopje. They all belong to the Jewish community where I originally grew up. Everybody is connected,” Drummer said.

She explained that the Germans knew the full names of every family member, their date of birth, their address, their occupation — the contact information of every Jew living in Macedonia.

“If you are asking how I know the people, how I identify them, I just remember the community. They were the friends of my parents. After the war, when I was born, it was like ‘the’ family, because no one had family. They were the family of each other.”

Many of Drummer’s relatives perished in the Holocaust. On her father’s side of the family, they were all sent to Treblinka, except for her father and her uncle who were students in Sofia, Bulgaria. Her father was a medical student. Her uncle was studying engineering. They were not taken to the death camps.

Drummer explained, “There were four types of groups that survived. One group was 10-12 medical doctors with their families. That is how my mother survived, because her father was a medical doctor.”

The second group were young partisans. There were 17 girls who hid in a small cigarette shop. The owner was a disabled man. He was a good friend of these girls. He hid them for about 2 weeks in his store, until they joined the partisans. He is one of the Righteous Among the Nations who is honored at Yad Vashem.

According to Drummer, “The third group were people that had foreign passports. When the Germans and Bulgarians occupied Macedonia, the Jews remained as people with no identity. They did not have a passport or other identification. That is why it was easy to send them to the death camp.”

Those who did survive had citizenship elsewhere. Many ran away to Albania. One family that Drummer knew about, ran away to the northern part of Greece.

The fourth group were young people who succeeded in escaping the country because they had received information, ahead of time, of what was going to happen.

Drummer’s immediate family survived the Holocaust in North Macedonia. Later, however, her parents died in the North Macedonia earthquake of July 26, 1963.

“On behalf of the government of Macedonia and myself, I pay respects to the 7,144 Jews who perished in 1943 in Treblinka. I think we can be really proud that we have such a wonderful monument as the pomegranate… I am happy that you are here and that you are preserving the memory of the Macedonian Jewish families. Not strong in numbers, but here to stay.”

Those who entered into the recent ceremony of remembrance; a community that experienced almost total extermination in Macedonia; were encouraged to have this special time together in Jerusalem.

Igor Sarni, with the Jerusalem based Artdi group that created the pomegranate memorial, summed up what was important about the sculpture.

“The idea behind it is the broken lives that happened in the Holocaust. It’s a break that stays with us, like most of the terrible things that happened at that time,” said Sarni. “I really hope that this memory will stay, and will create this feeling, that the community is not done. The community stays and continues.” 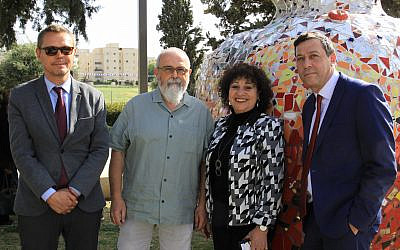 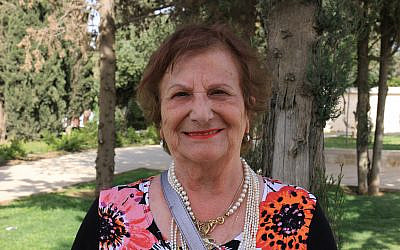 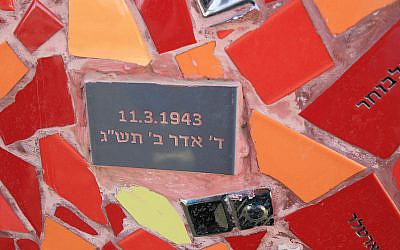 The date of the deportation of the Macedonian Jews to Treblinka death camp. Engraved on the Pomegranate memorial in Jerusalem. Photo by Carrie Hart. 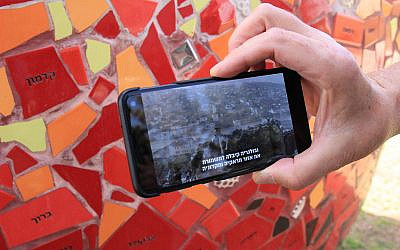 One of the three places on the Pomegranate sculpture where you can use your mobile phone, with an app, and see the stories of the Macedonian Jews. Photo by Carrie Hart. 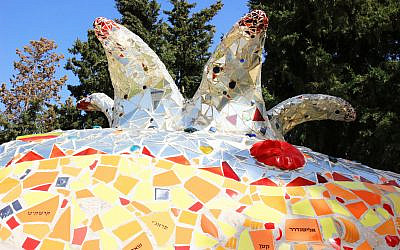 Jerusalem Pomegranate pieces of ceramics and glass. Photo by Carrie Hart.
About the Author
Carrie Hart is a news analyst reporting on political, diplomatic, military and social issues as they relate to Israel, the Middle East, and the international community.
Related Topics
Related Posts
Comments