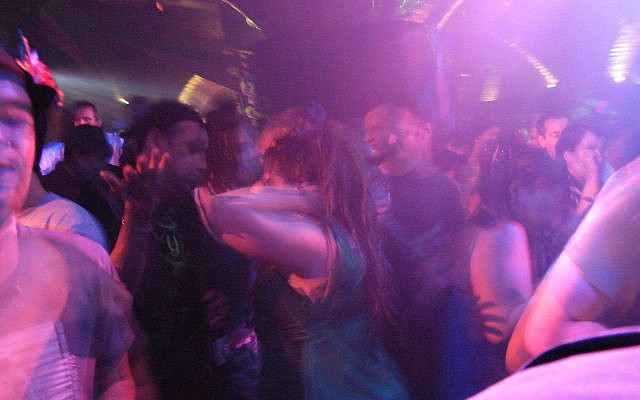 I am getting in the swimming pool one day this week, and a fellow swim buddy stops me, and he says to me all agitated, “Do you know that some young lady jumped into the pool yesterday in all her clothes and just started swimming?”

The guy was visibly upset and confounded as he was telling the story, and he says, “Yeah, and then she got out and just left in the clothes the same way she came!”

Then he asks me, all befuddled, “Why would someone come here and swim in their work clothes like that?”

I was wondering if this was perhaps a modesty thing, but I didn’t want to call out religious people for their propensity to use modest clothing, including swimwear, so I just sort of joked and said, “Well, if the person came to the pool in their work clothes, I wonder if they went to work in the swim suit?” Hey, it got a laugh, and then this guy went back more relaxed to do his swimming.

However, while I was under water, a light bulb went off in my head, and it occurred to me that a Jewish woman was here at the pool yesterday at just the time that this guy mentioned, and she is very Jewish-modest and swims well covered up, and putting two and two together, I was like, “Hey, he’s talking about us!”

What was incredible to me was that it didn’t even occur to the guy that this may have been a “religious” thing and that such a thing as modesty at a pool or beach would never even occur to him, where most men are used to seeing women scantily dressed. This started to make me realize how the gentiles just don’t “get” us.

In another conversation that I had recently with a friend who is vegetarian and doesn’t like to eat meat, he was asking me about my diet, and I explained that I keep kosher. He asked me if I ate meat, and I said “yes, but only kosher meat,” about which I wasn’t sure whether he knew exactly what that was or not. Before I could elaborate, he said, “But you eat seafood, right?” I said, “Well, not really,” because being kosher means we only eat certain fish as well. And the conversation continued like this for a little while about the various food restrictions we have as Jews.

This guy was super nice and interested, but it was again fascinating to me that while he ate what he was accustomed to and liked or didn’t like, it was a completely different thing for him to hear from me about eating only in the way that G-d commanded me. This is sort of a strange concept if you’re not religiously observant.

I could imagine this same type of dialogue and interaction happening about how we keep Shabbat and Jewish holidays and all the things that we don’t do on these days, including any sort of work, driving, cooking, shopping, or using electricity. And with this, like with any of the other 613 commandments that we perform (or at least the ones that don’t require the Holy Temple), if any gentile asks us why, well, it’s because G-d told us to!

Sure, many of the mitzvot that G-d commands we do can be rationalized, like not killing, stealing, or lying, but wait, many a non-Jew may be asking, “Can’t you guys commit adultery, even just an occasional one-night stand?” And we won’t even talk about trying to understand the Red Heifer that purifies the impure, but makes unclean those that prepare the offering. Listen, G-d, the Master of the Universe, has a far greater understanding and perspective than we do. And in traditional Judaism, we take that for granted!

Of course, when Jews are hypocrites, act holier than thou, or do bad things, they give the rest of us a bad name, and this can breed not only confusion about Jews but also, in the extreme, hate and anti-Semitism. One Chabad Rabbi said today that the Rebbe hardly ever used the word anti-Semitism or spoke of it; instead, he focused on the idea that Jews should do good and perform acts of G-dliness and righteousness in the world.

I believe we can all agree that Jews behave differently; sometimes they do good, sometimes they don’t, but regardless, we’re a little bit of a mystery to many non-Jews, which is sometimes shrouded in a large dose of fiction and conspiracy. For many, I put it this way: they still can’t understand why the fiddler was ever playing on the roof to begin with.