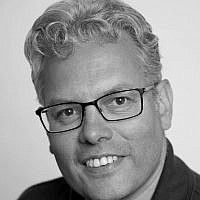 The Blogs
Mark Pickles
Apply for a Blog
Please note that the posts on The Blogs are contributed by third parties. The opinions, facts and any media content in them are presented solely by the authors, and neither The Times of Israel nor its partners assume any responsibility for them. Please contact us in case of abuse. In case of abuse,
Report this post. 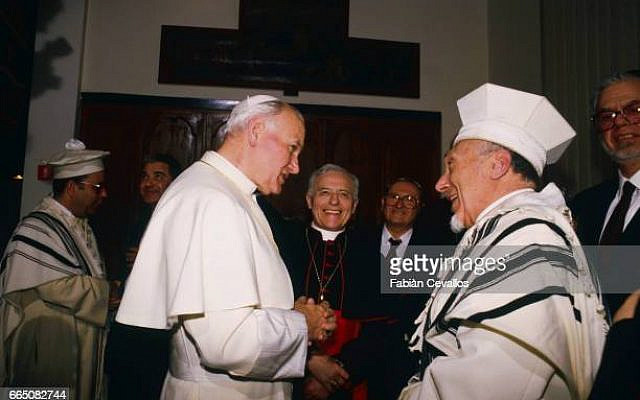 Today, January 17, 2021, is precisely 20 years since Pope John Paul II gave a remarkable General Audience, warning about mankind’s disastrous relationship with nature.  Man is no longer the Creator’s steward, the Pope said, but an “autonomous despot”.  The Pope chose to give his General Audience on Italy’s “Jewish-Christian Friendship Day”.

Sadly, in the ensuing 20 years, mankind’s relationship with nature has worsened, as has Christianity’s antisemitism/anti-Israelism, and as has antisemitism/anti-Israelism globally.  In fact as we will see, the nations’ explicit and perverted ganging up against Israel began later in 2001, at Durban, and a (Protestant) anti-Semitic Church-led initiative.  This is all the more reason to return to Pope John Paul II’s message to the world of 20 years ago today.  As I see it, man’s relationship with his fellow man, with nature, and with God all depend on man’s coming into the wholeness of knowledge of God of Israel. And this process is centered on where it started: Israel, Jerusalem, Zion. It is from Zion, and the House of God, says Isaiah, that nations and their leaders are ultimately called into their harmonious destiny.

The English version of the General Audience is on the Vatican website, here: 17 January 2001 | John Paul II (vatican.va).  At only about 1300 words, I recommend it to all people of faith in God Almighty, God of Israel.

I do believe that faith, in our times of ecological crises, should be profoundly “Green”.  We, human being, or ben Adam in the Hebrew, have dominion over Earth, but this means as stewards, or gardeners, not as exploiters.  Half of the world’s wildlife has been lost in the past 40 years, according to some methods of gathering data. That our generation is destroying the integrity of life on earth is beyond dispute.  And if 2020 and the Coronavirus pestilence has proved anything, it is that mankind must urgently find ways of reforming our relationship with nature if pandemic zoonotic viruses are not to destroy civilisation.  I suggest that this cannot be solely an economic or technological “Great Reset” or so-called “Fourth Industrial Revolution” proposed by the World Economic Foundation at Davos, and to which the Government here in Britain has enthusiastically signed up.  In fact, the “Great Reset” happened about 4000 years ago, or rather merely 4000 years ago considering the great age of human being, when God introduced God to mankind, and promised to raise Israel as the light unto all nations.

The Pope chose Jewish-Christian friendship day to call for “ecological conversion” with good reason. With the Psalmist, his General Audience relates the Creation to the 22 letters of the Hebrew aleph-bet. He draws from the Wisdom of Solomon, and he even quotes from Martin Buber’s Tales of the Hasidim in reminding his audience of God’s omnipotence and immanence in all of Creation.

John Paul II did seem to have a genuine respect and interest in Jews and Jewish faith, culture, and tradition. In his youth, in pre-War Poland, he took an interest in the thriving Jewish culture of his native Kraków.  In 1986, John Paul II became the first Pope to visit the Great Synagogue of Rome, whose foundation dates back to the second century BC.  According to this archived article in Time magazine, the Pope stood by the Chief Rabbi of Rome, Elio Toaff, in silent prayer. The visit is thought to be the first visit of a leader of the Church to any Jewish house of worship since the first century AD, when the first leaders of the new movement called “Church” called themselves “Christian”, or at least were called by outsiders as “Christian”.  These leaders, such as Saint Peter, Saint Paul, and Saint James the brother of Jesus were, all, of course, Jews, and all well-acquainted with the Jerusalem Temple, where they continued to worship alongside fellow Jews.

I am not a Roman Catholic; I am an adherent of the Church of England, but, in my view, John Paul II was one of a few great Western faith leaders within living memory who were not just great leaders, but great philosophical theologians.  Two others of note are our wartime Archbishop of Canterbury William Temple (d. 1944), of my own faith community, and Rabbi Lord Sacks.  All three were indispensable voices for their generation, and gave the world a remarkable outpouring of original and inspiring philosophy.  All three saw philosophy as indispensable to the study of theology, and all three consistently expressed their concerns about ecological destruction.  Here is just one of many examples of the recent work by Rabbi Sacks for instance, about what he calls the “ecological imperative” in Jewish law: The Ecological Imperative (Shoftim 5779) – Rabbi Sacks.

Archbishop William Temple’s concern for the environment, and the need to use earth’s resources wisely, for the sake of all mankind and all future generations, was prescient, as we can see from his wartime “Message from Canterbury” of 1942, released by the British Council in 1944.  It is remarkable that Temple could think ahead to beyond world war to the environmental disasters that would subsequently face the world. I recommend this 22-minute British Council film for its artistic and cinematographic merits alone.  Canterbury, in Kent, was dangerously close to the European continent, and although it suffered bomb damage, it miraculously did not sustain serious damage. The film begins with a long cinematic introduction, in the bucolic surroundings of Canterbury, with church bells, and snippets of church music of the English composers Henry Purcell, Orlando Gibbons, and Thomas Tallis.  Peaceful order and harmony is then broken by the sound of aircraft and the screeching bombs of the Nazis. A shepherd cowers by a haystack, surrounded by his sheep, which are shaking with fright… The film is wartime propaganda, of course, but good-spirited propaganda in the original sense of the word: propagation of faith, or Congregatio de Propaganda Fide.

Archbishop Temple was also prescient in his concerns for Church’s relationship with Judaism. With the UK’s Chief Rabbi Joseph H. Hertz, he founded the extant Council of Christians and Jews (CCJ).

Petra Marquardt-Bigman, a writer and Times of Israel columnist who sadly died last week, often noted that the Nazi slogan “The Jews are our misfortune” has, in the 21st century, morphed into “The Jewish state is our misfortune”.  Christians of nations such as Germany, Austria and Italy, and indeed here in the UK, are (usually) no longer overtly antisemitic, but nothing stops them from outsourcing their anti-Jewish animus to Palestinian Jihadist irredentists or other genocidal antisemites of the region.  We see this in the World Council of Churches and its so-called Ecumenical Accompaniment Programme in Palestine and Israel, which is supported by the Church of England. Indeed, just over a year ago I wrote a piece for The Algemeiner explaining that the Arab leaders of the Anglican Church in the Holy Land are leading “The Jewish state is our misfortune” narrative, and invoking 21st-century blood libels against Israeli Jews.

And anti-Israelism in contemporary Jewish-Christian groups is by no means the preserve of Christians.  There are Jews of course, often of Reform or Liberal or atheistic persuasion, equally attracted to Israel bashing in the name of Jewish-Christian dialogue.

In my view, and in the view of my good friend Dr David Patterson, this is all a result of man’s rebelliousness against God of Israel. His book Anti-Semitism and Its Metaphysical Origins is the best philosophical-theological analysis I have come across of the various forms of antisemitism/anti-Israelism: Pagan, Christian, Islamic, Marxist/Socialist, Secular… and Jewish.

Alas, most people involved in advocacy for Israel will not remember 2001 for Pope John Paul II’s General Audience on 17th January.  2001 has very negative connotations for Jewish-Christian dialogue.  It was the year, in Durban, at the United Nations Conference Against Racism, that the World Council of Churches (WCC) and Archbishop Desmond Tutu decided to poke a stick in the apple of God’s eye.  These churchmen convinced the United Nations to accept the 57 Islamic-bloc narrative – first introduced to the UN by President Idi Amin – that Israel – a tiny nation home to half the world’s Jews – is the most racist nation in the world. Tutu continues to push the absurd and perverse “Israel is apartheid” narrative to this day.

In other words, in 2001 Desmond Tutu and the WCC helped to wind the clock back to the 1920s, when Henry Ford, through his antisemitic weekly propaganda paper The Dearborn Independent, persuaded much of the world that “the international Jew” is “the world’s foremost problem” (in a series of that title).  When Hitler came to power, he was to cite Ford as his main inspiration.  Ford was immensely popular in the USA. He ran for Senate as a Democrat for Michigan, and narrowly lost. A few year later he was almost convinced by his following to become presidential candidate in 1924. I’m ashamed to say that Henry Ford was an Anglican, who, like Hitler, was enthused about reviving the antisemitic Good Friday Oberammergau Passion Play.

Incidentally, the German Pope, Benedict XVI, undid the good work of John Paul II (in my view) in 2007, by reintroducing – in his Summorum Pontificum – the supersessionist theology of praying for the “illumination of their [Jews’] hearts” in order that they might accept Jesus as their “saviour”.  And sadly, and alarmingly, Berlin is once again, the antisemitic capital of Europe reports Dr Manfred Gerstenfeld for the BESA Center.  What would John Paul II have made of this?

The Church, I suggest, has many vital tasks it needs to attend to in conserving Western (Christian) civilisation, including saving it from Islamism and Socialism/Communism and antisemitism, but Christian “illumination” of the Jews is not one of them.

God promised to pilot the destiny of all nations through the Jews.  And He will, as surely as the Pope is a Catholic.  We will see the world anew.  The world will know God anew.  There will be harmony, as in the very last words of the very last Psalm (150), including our “ecological conversion”.

About the Author
Mark Pickles is a Scientific Technical Writer with a deep interest in understanding theology in the light of modern knowledge. He was an atheist from ages 10 to 30, and since then has been an active and practicing adherent in the Church of England. In recent years he has been actively engaged in the battle against antisemitism and anti-Israelism within and without the Church.
Related Topics
Related Posts
Comments