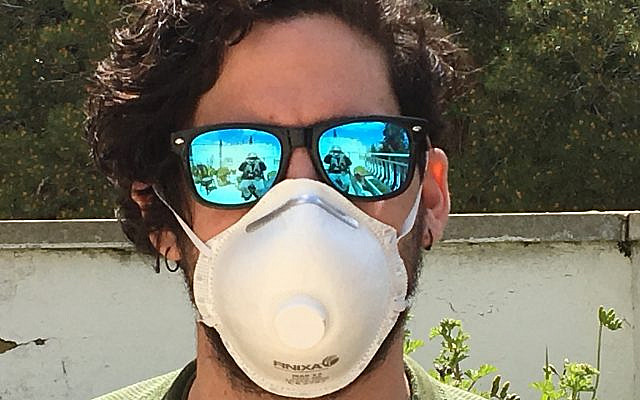 "Masking", photo by the author.

I have just returned from an adventure I wish I never had.  I also quiver with what is in store for me.  We live in uncertain times.

At 7:30 am I set out to send an express letter by 24-hr post at the local post office on Derech Beit Lechem St, Jerusalem.  I arrived at 7:40, hoping to be the first in line for 8 a.m. opening.  As I turned the corner, I heard throngs of voices, and lo and behold saw no less that 40 souls all roaming about, waiting for the doors of heaven to open.

No one knew who was first, who was in middle land, and who was last.  What generally should have been a simple process (distributing numbers) became a Kafkaesque cross between total pandemonium and a riot. The crowd was mixed, both in their ethnic origins and age.   An enterprising man started making a list, which soon became an impossible task.  Soon the post office door opened and the crowd flooded toward the young man in charge.  The crowd, now numbering sixty, were piled one on top of each other.  Most were wearing basic surgical masks, many hung below their noses, while others talked to each other with masks perched on their chins.

I am at a ripe age which I care not to reveal.  I have been through many wars, two nearly fatal car crashes and death by hatchet in a Stockholm public park.  However, in the moments trapped inside this boiling crowd, with screams and potentially lethal doses of coronavirus, I thought these were my last days on earth.

We are told by the Ministry of Health that we must learn to “regulate”; we must learn discipline, wearing masks at all times and  keeping social distance.  What I experienced this morning was not a bar scene (though it resembled one), not a doling out of free money, but rather the entrance of a public institution presumably designed to provide reasonable service to its citizens.  It was the Israel Postal Authority’s responsibility to provide order and not to leave angry masses of people to fend for themselves, while potentially endangering each other.  To expect a crowd of 60 people to “regulate themselves” is as absurd as expecting a herd of elephants to tip toe through the tulips.

Even at the local money changers, there is a line up cue, with simple posts and ropes to guide the way.  In most normal public situations (i.e., airport, pharmacies,  restaurants, and most government agencies) there are clear procedures in place.

The Post Office, at least the one I visited this morning, is ripe with public neglect, lack of planning and gross negligence.  If government agencies do not raise the bar of order and awareness, we, the public, cannot do our part in “self-regulating”.  It’s like local governments telling us how important recycling plastic is, while the local factories are manufacturing tons of plastic sheets with fumes circulating in our neighborhoods. Yes, we can do our part, but the “powers that be” must do theirs.

I am sure this is one of many security violations to which we have become numb (and accepting).   This does not auger well for our future, certainly not for most of us who want to get out of this current plague alive (or even  moderately healthy)!

I cringe now when I think of sending mail.  I recently ordered two carrier pigeons.  The new edition of these birds come complete with face masks.  These masks are sometime uncomfortable for them because to fly properly they need to lower their necks.  Most of the time, however, they manage to keep them on and get to where they are going.