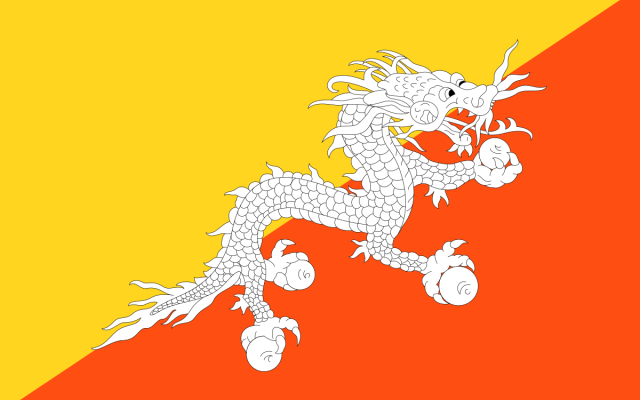 The national flag of Bhutan. A Redditor joked that whoever has to project this on City Hall in Tel Aviv has their work cut out for them. Photo: Wikipedia.

I’ve been as interested as anybody to learn about the announcement of diplomatic relations that have become a staple item in the news agenda in Israel for the past few months.

Although I’ll admit that my first thoughts have tended to turn to food.

“What’s Butanese cooking like? Will they open a takeaway in Tel Aviv?”

Sorry for being so debased. And hungry.

Regardless of whether we’ll be eating kosher jasha maroo and ema datshi next year in Jerusalem, it does seem certain that these ties are going to continue blossoming.

The pattern seems to be obvious now. Such that it can almost be predicted.

Insiders will leak cryptic clues that “more ties on the way” (note: the circle has already repeated itself and Oman and Indonesia are being billed as the next in line).

Then, one sunny morning, when Israelis have finished their morning coffee and forgotten about the latest round of speculation, social media will blow up with news that another former foe has announced ties with Israel. It’s happened — again! Then the Tel Aviv Municipality will light up City Hall with the colors of the new diplomatic partner’s national flag. Then we’ll all go back to worrying about the pandemic.

Many on the right in Israel have predictably seized upon this unexpected diplomatic windfall as proof of the genius of the now bygone Trump era — a reign, like that of Bibi, that they would seemingly wish continued indefinitely.

“Can you imagine Biden achieving any of these things? NO!” an angry-sounding commented intoned on the Jerusalem Post’s talkback sections. That type of discourse is pretty indicative of the lot.

While I have no doubt that the ties will benefit Israel, I think that pragmatism provides the best explanation for their sudden mushrooming.

The question at the heart of the emergence of ties between Israel and the Arab World is to what extent Arab nations are prepared to place Arab nationalism above the pragmatism.

And the emergence of ties between Israel and the UAE means that —in the eyes of many—the formula which historically governed ties has been upended.

You don’t need to be a prize-winning economist to see the positives for Israel’s new trading partners.

Normalizing diplomatic relations with Israel affords Arab countries a closer trade relationship with the regional superpower of the Middle East. One which can offer their countries technology exports and other know-how if their leaders allow it.

Emirati leaders have set the tone for the dance.

Their messaging has focused around highlighting to Israelis that this will be a “warm peace” — drawing a sharp distinction between relations with Egypt and Jordan.

While Israel and Egypt and Jordan are at peace, nobody is under any illusions about the depth of animosity that lie beneath the agreements. Periodic incidents like the shooting of a guard at the Israeli embassy in Amman and the tension over the returning of the “Island of Peace” enclave to Jordan underscore the depths of the division.

Secondly, UAE leaders have highlighted how their country can work with Israel for mutual benefit. Here, they have been transparent in their emphases — focusing on the commercial and economic nature of the relationship.

Thani Al Shirawi, vice-chairman and deputy managing director at the Al Shirawi Group of Companies, told an Israeli conference that the UAE could help the Startup Nation become the Scale Up Nation — referring to the high density of early stage startups in Israel but also to the fact that, as a tiny market, Israeli startups have historically needed intermediate markets from which to scale (a role up to now played predominantly by the US).

Although relations between Israel and the Emiratis have been quietly cultivating themselves for some time, the very sight of an Emirati businessman openly addressing an Israeli forum and calling for a “marriage” between the two countries would have been unthinkable just a few short years ago.

That is because the emergence of diplomatic and trade relations with Bahrain, the UAE, Morocco, and Bhutan represents nothing short of a betrayal — by the Arab world — of the Palestinian cause.

The geopolitical signal being sent out is clear: relations with Israel are no longer predicated upon Israel’s treatment of the Palestinians or the reaching of some kind of mutually satisfactory resolution to their conflict.

The moribund peace process — and the fact that the “Deal of the Century” is worth possibly only the paper it was written on — is no impediment to the advancement of bilateral ties.

Once the UAE broke ranks on this, the cascade that followed was almost inevitable. The internal Arab calculus around the Israel question has shifted. Somebody just had to be the first one willing to publicly rewrite the equation.

If forming ties with Israel no longer means being excommunicated from the pan-Arab fold, then there can only be net gains from doing business with Israel. Few countries want to shoot themselves in the foot by looking a gift horse in the mouth.

While the ties are certainly a boon for Israel’s export-led tech industry, in the minds of many, it would nevertheless be a mistake to mistake moves taken due to economic exigency for the beginnings of a new era of lasting peace with the Arab world.

The peace is not cold a la Jordan and Egypt. But it remains to be seen whether economic benefit can truly lead to a more significant rapprochement with dimensions that surpass the exchange of goods and services.

Henry Kissinger once said that America has no permanent friends or enemies, only interests.

Those words resonate beyond the context in which they were originally uttered.

For some friends of Israel, the carte blanche that the Arab world has provided it will be an unwelcome development. With the Palestinians’ hand further weakened by their marginalization from the Arab world, Israel has almost no incentive to put any more effort into pursuing peace talks with them.

For Israel, the establishment of ties with new trading partners will be a boost to its industry. The UAE relationship in particular will provide Israelis with a valuable regional hub from which to explore new markets.