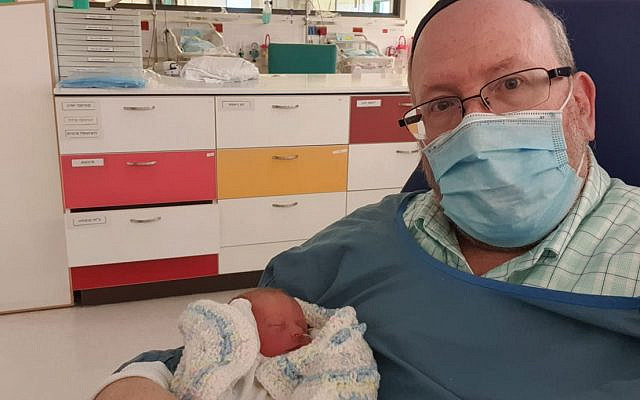 Around two weeks ago, the Heavens blessed us with our first grandchild. Our grandson surprised his parents by coming seven weeks early. Thank God, he is strong and getting stronger by the day. He remains in the NICU at Sha’arei Zedek Medical Center in Jerusalem, until such time that the medical staff deems him healthy enough to go to his new home.

I spent this Shabbat in my yeshiva with our gap-year yeshiva students. Staying in yeshiva enabled me to spend the morning in the hospital, only 20 minutes away. I walked through the light rain to the hospital just as the rays of the sun were beginning to pierce the early morning clouds and rain. The quickest way into the hospital is through the covered parking lot. The entrance granted me the chance to lower my hood and escape the rain, exposing my ears to the sounds around me. I quickly slipped past the red-eyed people in the parking lot, hearing them crying or speaking on their phones. One can only imagine the terrible news they received about loved ones who passed away during the night.

Leaving the Shabbat-mode elevator on the eighth floor, I met a few fellow travelers on their way to the synagogue. The space was already filled with those who arrived for the sunrise service. With the others attending the 7 a.m. minyan, we went outside until the first service could finish reading Torah. At that point, we could “switch sides” like an elaborate religious baseball game.

Entering the crowded shul, we prayed. And what prayers they were.

I have lived in Israel for almost 30 years and, in the time, had wonderous prayer experiences. I have worshiped at sunrise on Masada in the shadow of the last-ditch defense against the Roman legions during the Great Revolt. I have recited penitential prayers in front of the Western Wall with tens of thousands during the period of the Jewish High Holidays. Looking out at the Old City of Jerusalem, I have sat on the ground on the Haas Promenade, crying in lament with hundreds of others. I have rejoiced with throngs reciting the Hallel prayers on Israel Independence Day and prayed with thousands who stayed up all night both on Shavuot and Yom Yerushalayim. But nothing was as holy for me as praying in that crowded room in the hospital.

Every type of traditional Jew was present. Hasidim and Misnagdim, Zionists who stood for the prayer for the State of Israel while many more looked sheepishly around while remaining seated. Knitted Kippot, shtreimels, and every other type of head covering were present. All were praying together. All were hoping together and, in a way, embracing one another.

During the Torah service, a baby naming for a newborn girl or prayer for the newborn boy followed each aliyah. As the Torah service concluded, others lined up bearing the name of a loved one for the leader to include in the prayer for the sick. Each name represents someone fighting for their life. The air filled with tears. One could feel the prayers cutting through the clouds reaching upwards — prayers of joy, of fear, and of sadness. Holy prayers shook the heavens. One can almost imagine the angels stitching the various words together into a giant quilt to bring before the Holy One blessed be He. “Here, O Lord, are the hopes and fears and heartbreak of your people. Take them with care. Be enrobed in the glory of their holy words.”

As we finished, a lavish kiddush with hot Yerushalmi kugel was waiting. The person handing out the steaming hot pieces declared that someone donated the meal in the name of an ill person. May the patient merit a speedy recovery with the blessings uttered over the cakes and pastries that filled separate tables for men and women, as is the custom of some Orthodox Jews.

When grandparents’ visiting hours arrived in the NICU, I held my grandson, who quietly slept on my lap under a warm blanket. I thought of the words of Victor Hugo as I gazed into his tiny, premature face, “To love another person is to see the face of God.”

In the halls of that hospital and that small synagogue and the faces of the hospital staff and patients – Jew and Arab, Hasid and secular, Zionist and non, I could feel the presence of the Almighty.

Two of the Middle Ages’ greatest sages debated the origin of the obligation to pray. For Maimonides, the Torah commands daily worship. Like the Tamid sacrifices of old offered twice each day, the Jew must offer worship as a sacrifice to God. A generation later, Nahmanides argued that God demands prayer only when the Jew needs it most, at times of great sorrow or perhaps emotional difficulty. Rabbi Joseph Dov Soloveitchik suggested that at times the two combine. During the daily prayer service, when the Jew finds him or herself in times of suffering and travail, both sages would say, we fulfill the Torah command to pray. In the Sha’arei Zedek hospital, during the Shabbat morning service, it was clear that both interpretations of the obligation applied.

As my grandson and I rocked for the two hours of allowed visitation, I prayed that His people’s prayers should also move God above. The Halls of that healing institution felt as holy as standing on the Temple Mount.

May God grant a speedy recovery to the sick, comfort the mourners, and rejoice in the hopes and dreams of the new parents.