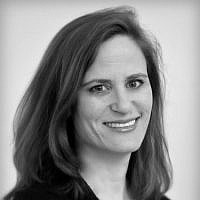 The Blogs
Laura Fein
Apply for a Blog
Please note that the posts on The Blogs are contributed by third parties. The opinions, facts and any media content in them are presented solely by the authors, and neither The Times of Israel nor its partners assume any responsibility for them. Please contact us in case of abuse. In case of abuse,
Report this post.

As 2014 draws to a close, I can’t help but reflect on this year’s dramatic increase in antisemitic and anti-Israel attacks, and hope that the coming year will see more Jews actively join the fight to reverse these trends.

In Israel itself, 2014 saw another round of the now familiar cycle: Israeli concessions to “advance” the fake peace process, Palestinian Arab rejection, then increased violence against Jews.  This year saw the violence include the murder of the three teenage boys, car attacks killing adults and infants, multiple murders by stabbing and gunfire, the bloody butchery of rabbis at prayer, acid hurled at children, and the deaths of some six dozen souls in Israel’s response to Hamas’s relentless rocket and tunnel campaigns against civilian centers.  And that is just what made the news.  Dozens more attacks, often resulting in serious injury, are never reported in the English press.

In the US, this year saw the administration break new ground in both rhetorical assaults and concrete action against Israel.  From personal attacks on Israeli leaders, to frequent public condemnations on even municipal affairs, to the closing of flights to Israel’s airport, to the withholding of routine weapons transfers in the midst of a war, this administration has made it clear that it will use all means at its disposal to pressure Israel.  Just this week Kerry declined to rule out future US support for a UN Security Council resolution supporting a Palestinian Arab state; what a way to reward a rejectionist PA leadership that incites terror and refuses to acknowledge the right of Jews to live in any part of Israel.  Moreover, the extended negotiations with Iran signal the prioritization of expanding US-Iran relations over stopping Iran’s nuclear aspirations.

And in Europe, this year saw chilling echoes of  the 1930s, both in overt antisemitism and the appeasement of evil.  Violent attacks on Jews have increased sharply and threaten to drive out the remnants of European Jewry.   Jewish businesses are subject to attack and boycott. Aliyah from France has nearly doubled, as more and more French Jews feel threatened, and believe they will have to leave to protect their safety and that of their children. Thankfully, this time they have a place to go.

But no Jew can afford to take that for granted.  Whereas once calls for Israel’s complete elimination were fringe or at least delivered in Arabic, we now routinely hear “From the river to the sea, Palestine will be free,” and there is no mistaking the intention.  The Boycott, Divestment and Sanctions (BDS) movement has gained tremendous support, yielding results in municipalities, on college campuses, in organizations such as the Presbyterian Church and the Association of American Studies, and even some Jewish groups, even though BDS founders openly call for the destruction of the Jewish state.

Indeed, ever more powerful voices attack Israel’s existence as the nation-state of the Jews. We see this in the widespread condemnation of the “Jewish state” bill, as though confirming a nation’s dominant ethnic or religious culture were contrary to democratic principles.  (If it were, there goes European democracy, since virtually all European countries have an official state religion, language, and ethnicity.)  We see this in the rush of European nations to endorse statehood for Palestinian Arabs, despite the fact that PA leadership of all parties openly incites violence against Israelis and Jews worldwide, uses international funds to pay salaries to terrorists, and has defiantly refused to recognize a Jewish state within any borders.

And this week, we saw the removal of Hamas from the EU’s terrorism blacklist by the General Court of the EU.  The explanations and excuses were manifold, but as ZOA President Mort Klein stated, “Steps like the court decision are precisely the sort of softening-up steps which precede a political decision to legitimize a terrorist group.”  To disregard Hamas leaders’ open support of civilian murders and its Nazi-like charter explicitly calling for the annihilation of every Jew worldwide puts Hamas on the same path to legitimacy that worked so brilliantly for the PLO and the PA, whose diplomatic aims are routinely granted without regard to its sustained support for terrorism and direct incitement of murder.  And while the US has not changed the designation of Hamas as a terrorist organization, it has neither stalled diplomacy nor cut funding to the PA as a result of its (now collapsed) unity government with Hamas.

Perhaps the policy implication for Zionists in the US is the need to remind the current administration, the American public, the Western world, and ourselves of the value of having a pro-Western capitalist democracy physically confronting our common enemies in the Middle East.  Where would evil actors train their gaze if Israel did not exist? What nation would stand as proof that capitalism and democracy can work in that part of the world?  Israeli economic success, without oil riches, shows that an educated population is the most important natural resource.  Israeli civil liberties and freedoms show its neighbors that authoritarianism is not the only way to control an unruly populace. Israeli defensive military dominance shows that no matter what political divisions may exist, Israel’s citizens are united in their willingness to fight for their country.

Israel is certainly worth fighting for, whether as a sanctuary and protector of Jews worldwide, a front-line in the West’s war against jihadi threats, or a beacon of human rights and pluralism.  In 2015, let us rededicate ourselves to ensuring the endurance of a modern miracle, a strong Jewish state of Israel.

Laura Fein is the Executive Director of ZOA-NJ.  She can be reached at ZOANJ@ZOA.org or https://www.facebook.com/ZOA.NJ.

About the Author
Laura Fein is a practicing attorney and consultant. She writes on topics concerning Israel, innovation, education, and parenting.
Related Topics
Related Posts
Comments