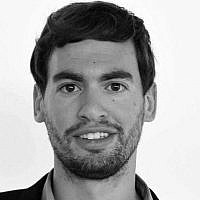 The Blogs
Akiva Spiegelman
Media Consultant
Apply for a Blog
Advertisement
Please note that the posts on The Blogs are contributed by third parties. The opinions, facts and any media content in them are presented solely by the authors, and neither The Times of Israel nor its partners assume any responsibility for them. Please contact us in case of abuse. In case of abuse,
Report this post.

Everything has already been said about the World Cup in Qatar and the enormous corruption that surrounds it. All the reasons in the world indicate that holding the World Cup in the terrorist-hideout country was a mistake and they did not deserve to host the football celebration to begin with.

Still, the event has started, the fans fill the stands more and more as the decisive moments are reached and the cameras aim to capture moments of sporting camaraderie. However, Israeli media representatives report from the field about harassments and unpleasant statements against the State of Israel without the perpetrators having a real discussion on the subject. In the various videos, young Arabs are seen waving PLO flags and shouting “free Palestine”, and then disappearing. They do not conduct a dialogue on the matter and are not willing to hear counter arguments. They are not to blame for this reality after years of indoctrination.

For years, David Bedein has been working to prove the indoctrination in UNRWA school textbooks, an organization that perpetuates the conflict and poverty among those who define themselves, often without factual basis, as refugees following the Six Day War, during which it is claimed that around 250,000 became refugees. As of 2019, UNRWA claims, that there are approximately 5.6 million Palestinian refugees, of which 1.5 million live in refugee camps managed by UNRWA. A quick look at the students’ textbooks shows that the hope for a common future is very distant.

When a boy or girl learns from a young age to admire the terrorist Dalal Moghrabi, the terrorist who murdered 38 Israelis in the deadliest attack in the history of the State of Israel, it is no wonder that those children grow up to aspire to act like her. Worse off, they learn that she is a national hero and ignore the fact that her actions claimed the lives of many including 13 children.

According to a report published by the Anti-Defamation League during April last year, the Qatari Ministry of Education continues to print textbooks with widespread antisemitic messages.

Following the release of data in 2019 by the ADL and the Middle East Media Research Institute (MEMRI), the Qatari Ministry of Education removed key textbooks from its website, a move that undermined efforts by US officials and civil society to monitor reforms that Qatari officials had pledged to the US State Department.

Unlike Qatar, Saudi Arabia receives praise for its activities to eradicate these contents from the country’s textbooks.

In Morocco, a report surfaced according to which the Moroccan Education Union rejected any educational and cultural normalization with Israel, seizing plans by Rabat and Tel Aviv to implement joint education programs. In a letter sent by the union to the Ministry of Education in Morocco, it is claimed that this is an attempt “to include the Jewish heritage in the Moroccan curriculum”.

In Saudi Arabia, they began to promote processes of tolerance and the inclusion of learning contents related to the Holocaust in the education system, but it is claimed that alongside all these, the map of Israel does not yet appear in them.

In 2018, it was reported that in Tunisia teachers protested against the use of the word ‘Israel’ in a test and the schools in the country continue to hold and celebrate ‘Palestine Week’ on an annual basis.

The Arab distaste for Israel, with and without the historic Abraham Accords, runs deep into the surface and creates a generation that is unaware of its past, that glorifies terrorists and condemns constructive dialogue. The surprise of the Israeli reporters is authentic, but it reveals nothing new in any shape of form. We must continue to work to reveal the truth and more importantly – make sure the younger Arab generation is aware of it. Only then can we move towards a truly new Middle East.

About the Author
Akiva Spiegelman holds a bachelor's degree in advertising and marketing communications from the Ono Academic College. During his degree, he interned with MK Sharren Haskel, founded the Model UN Club at the Ono Academic Campus, and at the same time served as a spokesman for the Model UN Organization in Israel. In recent years, he served as head of the Open University Student Association's Spokesperson's Department, spokesman for the Center for Near East Policy Research, as a researcher in the Likud campaign and worked in the international department in the Galai Communications PR Firm. Currently acting as deputy to the the spokesperson at the Beit Shemesh Municipality.
Related Topics
Related Posts
Akiva Spiegelman