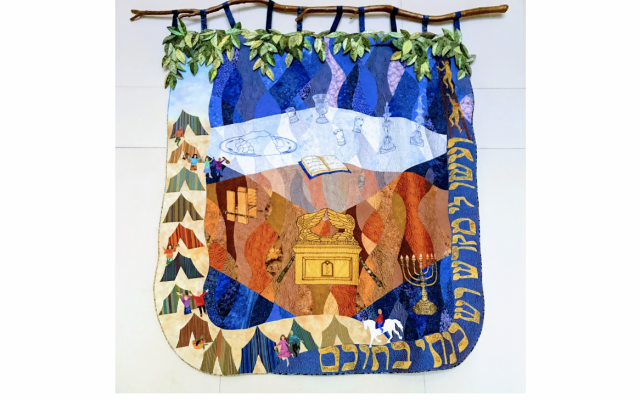 This week, Jordan’s Crown Prince Hussein cancelled a trip to the Temple Mount in Jerusalem after a disagreement with Israel over the size of his security detail and the heavy weapons they brought to enter the sovereign State of Israel. In context, this can also be seen as part of a historical conflict over the authority of the holy Temple Mount itself.

In Judaism, we yearn and pray daily to “restore G-d’s divine presence to Zion” with the rebuilding of the holy Temple in Jerusalem. Generally, Judaism believes that the 3rd Temple will be rebuilt in the time of the Mashiach, so any forward discussion of it before this period of redemption is not typically encouraged and may even be considered sacrilegious in some ultra-Orthodox circles.

So while even now-a-days, with Jerusalem and the Temple Mount in our hands since the 1967 War, many Jews will not even ascend and pray on the Temple Mount, because apparently it is not yet time for the rebuilding and therefore, we do not even approach the extreme sanctity of where the Holy of Holies once stood.

Yes, after 2,000 years, Jerusalem is once again in our hands, and it is “the unified and eternal capital” of Israel, yet the Temple Mount is not under our stewardship, but rather is managed by the Islamic Waqf and under Jordanian custodianship. For over 1,300 years, the Temple Mount has been divorced from having been the site of two holy Jewish Temples and instead made to be seen much more narrowly as Islam’s 3rd holiest site, with the al-Aqsa Mosque and the Dome of the Rock, where Mohammed is said to have ascended to heaven.

In essence, the Jewish Temples have been not only physically buried over, but also the site has been historically Islamicized despite the Temple Mount’s intrinsic holiness to all three major religions (Christianity, Islam, and Judaism). In short, this is a very sensitive issue that is likely anchored in facets of intolerance and religious rivalry, as well as pretenses of superiority and dominance, rather than ultimately on the shared connection we have through both our genetic and spiritual lineage as Abraham’s decedents.

In this week’s Torah portion of Vayakhel and Pekudai, we learn about the building of the holy Mishkan (Tabernacle) as the Israelites wandered in the desert for 40 years prior to settling the land of Israel. The Mishkan was precursor to the Jewish Temple in Jerusalem, but even for this temporary dwelling place for Hashem among His people, we are told of the loving and abundant giving of precious items by the Jewish people to construct it until Moshe had to say stop, that “the people are bringing more than enough” (Exodus 36:5).

Now, the Jewish people have survived through the destruction of both our first and second Temples in 586 BCE and in 70 CE as well as our long exile from our homeland until the founding of the Modern State of Israel in 1948. Yet, even with our miraculous redemption from the Holocaust and the return of our people to the land of our forefathers, the Promised Land of Israel, we are still not able to see the rebuilding of our holy Temple in Jerusalem. While of course, it is a great honor to even be able to go and pray at the Kotel (the Western Wall) of what was once our beloved Temple, we are still at arms-length from the actual rebuilding itself and the subsequent ability to once again fulfill  all the mitzvot associated with it

While I understand that we, as Jews, must merit the arrival of Mashiach and the rebuilding of the Temple and we must do everything we can in terms of following the Torah and tikkun olam to hasten the arrival, still it painful to see only the Mosque and the Dome of the Rock perched atop Judaism’s holiest site, where literally Heaven and Earth are said to meet since creation of the world itself, and where the sacred binding by Abraham of his beloved son, Isaac, took place in a supreme test of his faith in Hashem.

Further, it is even more awful when some Muslim leaders deny the very existence of our having had a holy Temple to begin with and resorting to violence and terror during the Intifada and other Arab riots, hurling rocks from the Temple Mount unto the heads of the Jews praying below. Not only is it a grave physical danger to the people worshipping at the Kotel, but also it is a vile desecration to our freedom of religion to be under attack in our most holy place.

But what can we do even as Israel is surrounded and vastly outnumbered by enemies in terms of our geographic and political reality, yet are we not entitled to have our people and their religious rights respected and no longer vilified and defiled?

Of course, we absolutely want to have a peaceful and productive coexistence with all people, but just as Israel has risen from the Valley of Dry Bones, so too the day is coming soon when the Jewish Temple will be rebuilt in shinning glory and we can worship G-d just as we did in times before. What will be special about the 3rd Temple is that it will not only be for the Jewish people, but for all the world’s people to come together harmoniously to recognize and worship the one true and faithful G-d of us all.