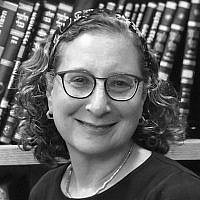 The Blogs
Adina Fredman
Apply for a Blog
Advertisement
Please note that the posts on The Blogs are contributed by third parties. The opinions, facts and any media content in them are presented solely by the authors, and neither The Times of Israel nor its partners assume any responsibility for them. Please contact us in case of abuse. In case of abuse,
Report this post.

In Parshat Vayechi we encounter a novel blessing. Jacob is the first, and only, figure in the Torah to give his grandchildren a bracha. When Joseph, the Viceroy of Egypt, hears that his father is ill, he takes his two sons, Menashe and Ephraim, born and raised in Egypt, to see their grandfather. Jacob does not immediately react to the sight of the two young men. Instead he uses their visit to repeat the story of his encounter with God at Beit El, as he was fleeing from his brother who wanted to kill him. In Jacob’s moment of crisis, God promised him the blessings bestowed on his father and grandfather.

and [God] said to me, ‘I will make you fertile and numerous, making of you a community of peoples; and I will assign this land to your offspring to come for an everlasting possession.’ (Bereishit 48:4)

Then Jacob changes the subject and pronounces

Now, your two sons, who were born to you in the land of Egypt before I came to you in Egypt, shall be mine; Ephraim and Manasseh shall be mine no less than Reuben and Simeon. (48:5)

Rashi understands this to mean that Ephraim and Menashe will each inherit a portion in the land of Israel along with the other tribes. At this point, Jacob again changes the subject and reminds Joseph that his mother, Rachel, died on the road and was buried in Efrat near Bethlehem. Jacob then notices his grandchildren but doesn’t recognize them. When Joseph identifies them as his sons, Jacob blesses them.

The Angel who has redeemed me from all harm—

Bless the lads.
In them may my name be recalled,
And the names of my fathers Abraham and Isaac,
And may they be teeming multitudes upon the earth.” (48:16)

So he blessed them that day, saying, “By you shall Israel invoke blessings, saying: God make you like Ephraim and Menashe.” (48:20)

Jacob then concludes the conversation with the prophecy that God will always be with them and will return them to the land of their forefathers.

There are two striking points in this encounter between Jacob, Joseph, Ephraim and Menashe. First, the language that Jacob uses to describe his relationship with his grandsons is intensely personal:  “me,” “mine,” “my name.” The Torah does not record any previous interactions between Jacob and his grandsons, yet there is clearly a deep connection between them.

The second point to note is the unusual way in which Jacob jumps from subject to subject. Perhaps these are just the ramblings of an elderly, partially blind man on his deathbed? Or, perhaps, Jacob is giving one unified message to his born and bred Egyptian grandchildren? We can imagine how foreign these grandsons must have seemed to Jacob. They grew up close to royalty in a culture so different from that of the house of Jacob. They speak a different  language and seem to have little in common with their flock herding relatives in Canaan.

Jacob knows that he must ensure that Joseph’s children remain part of and identify with the family. He does this by recounting the moment that God appeared to him, blessed him, and initiated him into the Covenant. By proclaiming that Menashe and Ephraim are “mine” and “shall be called by my name”, Jacob is making sure that his grandchildren know that they too are inheritors of the blessings and promises of God. They will be counted among Bnei Yisrael, notwithstanding their Egyptian beginnings.

In retelling the story of the death and burial of their grandmother, Rachel, Jacob reminds his grandsons that they already have a connection to the Land of Israel. Their paternal grandmother is waiting for her children to come home. Finally, Jacob reminds them that their existence in Egypt is temporary. God will fulfill His promise to return them to the land of their Fathers.

What can Jacob’s final blessings to his grandchildren teach us about the role of grandparents in transmitting Torah values to their grandchildren?  The Gemara in Kiddushin 30a teaches

Rabbi Yehoshua ben Levi says: Anyone who teaches his son’s son Torah, the verse ascribes him credit as though he received it from Mount Sinai.

This is an awesome responsibility. How do we convey the experience of Sinai to our grandchildren? How do we make text and ritual meaningful? Perhaps we can learn from Jacob’s words in our parsha. First, make sure that our grandchildren know they are part of us and the entire Jewish family. Second, remind them of their deep roots in Torah and the Land of Israel. Third, teach them that they are the inheritors of the Covenant between God and our ancestors. Finally, instill the belief that God is always with us and will redeem us as promised.

About the Author
Adina Fredman is a member of the Advanced Kollel: Executive Ordination, Class of 2022. She also teaches Tanach in the Maharat Beit Midrash Program. Adina learned at Drisha and Nishmat and taught Judaic Studies at SAR Academy for fifteen years. Adina and her husband are Saba and Savta to eleven amazing grandchildren.
Related Topics
Related Posts
Comments