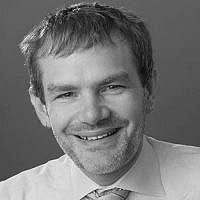 The Blogs
Aaron Dorfman
President, Lippman Kanfer Foundation for Living Torah
Apply for a Blog
Please note that the posts on The Blogs are contributed by third parties. The opinions, facts and any media content in them are presented solely by the authors, and neither The Times of Israel nor its partners assume any responsibility for them. Please contact us in case of abuse. In case of abuse,
Report this post. 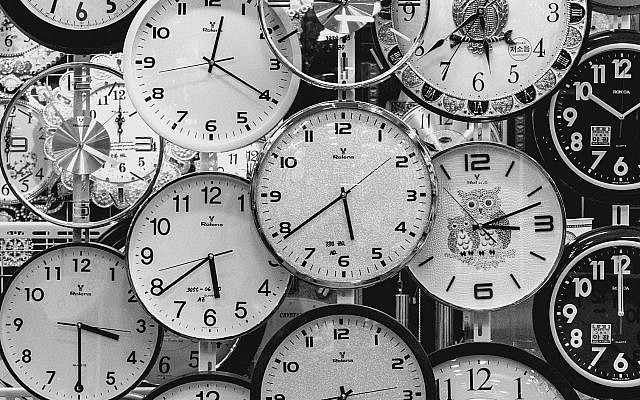 Among the many trivial disappointments wrought by the COVID pandemic is the repeated postponing of Christopher Nolan’s hotly anticipated summer blockbuster “TENET.” Nolan loves to play with time—his breakout film “Memento” is a Bach fugue of interwoven chronologies, one moving forward in time and the other backward in time until they meet in the middle as the film ends. But it’s the temporal clockwork of “Dunkirk” that feels most relevant as we approach the end of our first half year of #COVIDtime. The film tells three concurrent, nested stories: the multi-day evacuation of the British army from Dunkirk, France, early in World War II; the day-long misadventures of a platoon of British and French soldiers caught up in the evacuation; and an intense hour in the lives of a pair of RAF pilots providing air cover for the British flotilla. As “Dunkirk” weaves among these three narratives, the viewer’s affective experience of time dilates and compresses relentlessly, from the relative calm of thousands of anonymous soldiers arrayed on the beach, to the nerve-jangling intensity of a 45-second dogfight filmed from the cramped cockpit of a Spitfire.

This toggling between the wide angle and the tight focus, between measured pacing and frenetic activity, feels like a uniquely apt allegory for the experience of these past six months living with COVID-19. I was just recounting with my family those early days in the lead up to and following Purim when it seemed like our understanding and expectations changed literally hour-to-hour: Should we attend the megillah reading? What do I need to bring home from my office if I’m not going back? Why can’t I find frozen broccoli anywhere? Masks or no masks? Is our kids’ school going online until Pesach? Memorial Day? The rest of the school year?

At a certain point, however, that accelerated rate of change slowed, certain things became clearer, it became possible to plan for weeks and months instead of hours and days. And now, as we prepare again for the start of the school year, I feel the tempo picking up again. Will the hybrid and in-person experiments work? At what cost? What are the trade-offs and alternatives? To pod or not to pod? It’s a lot.

This distorted sense of time is just one of the myriad complexities of this unprecedented period, but it’s one that highlights for me how essential it is for us to record the stories of this experience. Psychologists have long recognized the ways in which the stories we tell ourselves about our personal experiences have profound implications for our identity formation. Some, like Marshall Duke at Emory University, have begun to argue that this link between story and self also applies to families and, potentially, communities. Part of our ability to integrate this supremely disjointed and fragmented experience in a way that allows us to emerge intact will be how we tell our pandemic stories—to ourselves, to one another, and to future generations.

As Jews, crises have been crucibles in which much of Judaism’s greatest wisdom has been forged. Hanukkah, Purim, and Pesach are profound encapsulations of the Jewish community’s response to historical calamity. calamity. The flourishing of Reform and Orthodox Judaism were both reactions to the upending experiences of the Enlightenment and Emancipation. We’re still coming to terms with the radical theological and philosophical implications of the Shoah. And even the Talmud can be conceived of as a colossal, centuries-in-the-making reckoning with the destruction of the Temple.

As Yosef Yerushalmi writes in his classic text Zakhor: Jewish History and Jewish Memory, one of Judaism’s unique innovations was the Tanakh’s elevation of human historical experience as the foundation of our tradition: “For the first time the history of a people became part of its sacred scripture.”

Ensuring that the particularly Jewish stories of the pandemic are thoughtfully and intentionally chronicled will not only help us emerge more whole from these extraordinary times, it will also enable our descendants to learn from and make meaning of what we’ve endured. Who knows what this generation’s version of the Talmud will be?

But we can also learn from the limitations of past chronicling efforts. Another lesson we can take from Nolan’s “Dunkirk” is that no single narrative tells a whole story. The assembled regiments on the beach, the platoon and its mishaps, the fighter pilots are all essential threads in the tapestry of this story—and there are undoubtedly more yet. One of many insights from the Black Lives Matter movement is that the American story needs everyone’s voice, and that, for centuries, we have systematically excluded so many of them—particularly those of Black, Brown, and Indigenous communities—to everyone’s diminishment. As Adrienne Rich wrote:

“When those who have the power to name and to socially construct reality choose not to see you or hear you…when someone with the authority of a teacher, say, describes the world and you are not in it, there is a moment of psychic disequilibrium, as if you looked in the mirror and saw nothing.”

We in the Jewish community have a great deal of work to do to ensure that the story we tell reflects the full breadth and depth of our community’s spectacular diversity.

Since the early days of the pandemic, we at Lippman Kanfer Foundation for Living Torah have been committed to chronicling this experience, and particularly to ensuring that our diverse, collective stories are captured for ourselves and for future generations.

First, working in partnership with the Covenant Foundation and the Righteous Persons Foundation, we’re supporting the American Jewish Historical Society’s project “Toward a Meaningful Snapshot of the American Jewish Community in 2020.” AJHS is identifying and interviewing 36 diverse Jewish communal leaders, culminating in a collection of oral histories testifying to their experiences and the impact of the pandemic on American Jewish life.

Second, with the partnership and support of the Jim Joseph Foundation and the Charles and Lynn Schusterman Family Foundation, we (virtually) convened an advisory committee of 11 Jewish archivists, librarians, social scientists, and museum professionals over a period of six weeks this summer to help identify critical gaps in their collective efforts to chronicle the pandemic’s impact on Jewish communities, engage in a blue-sky brainstorm of possible responses, and then design and refine a set of high-value grant opportunities. (As part of that work, we commissioned a landscape map of current collecting efforts related to COVID-19, both within and beyond the Jewish community, which we invite you to explore.) We’re pleased today to be releasing a consolidated RFP that encompasses four initiatives that will—individually and in concert—strengthen the American Jewish community’s capacity to tell a rich and meaningful story of its experience of the COVID-19 pandemic. (You can read more about this initiative in articles published this week in Jewish Insider and eJewish Philanthropy.)

As Walter Benjamin observed, “A chronicler who recites events without distinguishing between major and minor ones acts in accordance with the following truth: nothing that has ever happened should be regarded as lost for history. To be sure, only a redeemed mankind receives the fullness of its past—which is to say, only for a redeemed mankind has its past become citable in all its moments.”

About the Author
Aaron is a lifelong educator, problem-solver, and social justice activist. Prior to joining Lippman Kanfer Foundation for Living Torah as President, he spent 10 years as part of the leadership team at American Jewish World Service (AJWS), organizing and mobilizing American Jews to channel their philanthropy, volunteer time, and political power to support global human rights. Before joining AJWS, Aaron spent nine years designing and leading informal education programs at Temple Isaiah, a synagogue in the San Francisco Bay Area. Aaron is a member of the SafetyRespectEquity Advisory Board. He was also a founding board member of Repair the World, a nonprofit committed to promoting service in the Jewish community, and served on the board of Coney Island Prep, an innovative charter school in South Brooklyn. Aaron holds a BA from the University of Wisconsin, an MPP from the Harvard Kennedy School, and a Certificate from the Pardes Institute of Jewish Studies. He lives in Brooklyn with his wife Talia Milgrom-Elcott and their daughters Oren, Sela, and Dami.
Related Topics
Related Posts
Comments