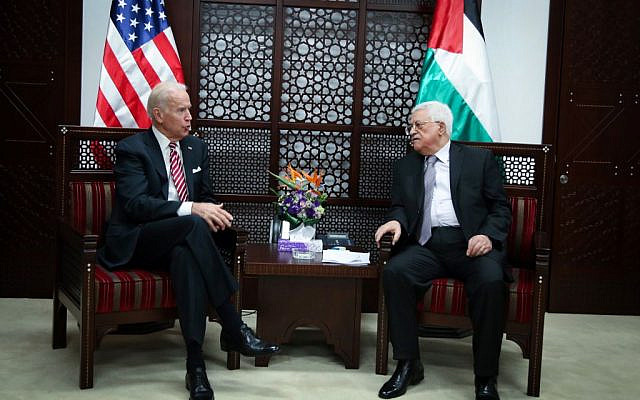 “If we are going to live another four years with President Trump, God help us,” declared an exasperated Palestinian Prime Minister, Mohammad Shtayyeh, in mid-October. To the great relief of Palestinians, President Donald Trump was defeated in the just-concluded US elections in favor of a friendlier “human being,” Joe Biden, who will be inaugurated as the 46th US president on January 20, 2021. And, that is not soon enough for the Palestinians!

In fact, a senior advisor to Palestinian President, Mahmoud Abbas, shared with me that there is concern among the PA leadership that Trump might take actions between now and January 20th that could irreparably harm the Palestinians. That is one of the reasons the PA is keeping low-key and not celebrating publicly the departure of the most anti-Palestinian US president in history.

Ironically, Palestinians are welcoming the election of Biden, who is a self-proclaimed Zionist and a hawkish right-winger on Israel relative to his Democratic party. However, it has been nearly four agonizing years since the Palestinians heard a US president or president-elect express sympathy for the Palestinians, which Biden often does.

Palestinians recognize that the new Biden administration will have to deal with more pressing issues facing the United States before it can give serious attention to their deteriorating plight. Palestinians recognize as well that it would be a pipe dream to expect that Biden will succeed in forging a permanent peace agreement between Israel and Palestine that will ultimately lead to the creation of an independent and viable Palestinian state living side-by-side next to Israel in dignity and security.

The Biden administration’s policies toward Israel and Palestine will be shaped by a host of factors – some old, and others new, largely attributed to the eccentric and unstable personality of Trump. The advent of the new Biden-Harris administration will usher new policies toward Israel and Palestine that will be defined by some of these basic tenets:

An even-handed approach toward the Palestinians: Biden and his vice president-elect, Kamala Harris, have already promised a different and a more even-handed approach to the Palestinians. In a statement given prior to the elections to Arab American News site, Harris vowed that a Biden-Harris administration would reopen the PLO office in Washington; reopen the US consulate in East Jerusalem which serves as an unofficial representative office to the Palestinians; and take “immediate steps to restore economic and humanitarian assistance to the Palestinian people and address the ongoing crisis in Gaza.” Notably, the Biden-Harris website makes no mention of the restoration of aid to UNRWA although it is widely believed that such aid, which constituted about one-third of the agency funding will resume under the Biden administration.

No annexation of West Bank territories: Before getting elected, Harris penned an open letter to Trump warning that annexation of parts of the West Bank could cause “serious conflict, the further breakdown of security cooperation with Palestinian security forces, and the disruption of peaceful relations between Israel and her neighbors, Jordan and Egypt.”

Illegality of Israeli Settlements: Under international law, Israeli settlements are illegal and will be treated as such by the Biden-Harris administration. The expansion of Israeli settlements in the West Bank or the confiscation of Palestinian lands will be frowned upon by the new administration. Realistically, however, no ultimatums will be issued should Israel unilaterally alter the status quo.

BDS (boycott, divestment, and sanctions): As a senator, Harris voted against the Israel Anti-Boycott Act that would have criminalized boycotting Israel “out of concern that it would hurt Americans’ First Amendment Rights.” The Biden-Harris administration is unequivocally against the BDS movement but support for BDS will not be construed as violating US laws.

Netanyahu will pay for his close ties to Trump: Netanyahu’s close relationship with Trump – and more broadly the Republican party and its evangelical base – will invariably cost Israel a heavy price as long as Netanyahu is prime minister. Netanyahu’s chumminess with Trump has undercut Israel’s traditional bipartisan support in Washington and alienated many Democrats, especially the rising progressive wing and the largely liberal Jewish American community which overwhelmingly voted for Biden. Liberal Jews viewed Trump as an ally of anti-Semites whose conduct, character, and statements make him a unique threat to democracy.

Notwithstanding these encouraging tenets of the new Biden-Harris administration, the Palestinians will have to live with some of Trump’s policy decisions for a long time.

US Passport Modification: Trump’s decision to allow US passport holders who were born in Jerusalem to add Israel next to Jerusalem, if they so wish, is another symbolic yet important decision that Trump made to please his evangelical base and biggest admirer, Netanyahu.

Unlike many political observers, I view such new Arab-Israeli ties as added leverage that the Palestinians can use in putting pressure on Israel either in dealing with the Palestinians or, if we are all fortunate, during the negotiations leading to a final peace agreement between Israel and Palestine and the establishment of a hoped-for Palestinian state.

It is noteworthy here to point out that had the UAE not intervened and stopped Netanyahu from annexing 30 percent of the West Bank on July 1st, which would have been quickly recognized by Trump, the path to a viable Palestinian state might have been blocked. And, to undo that recognition by Trump – if Biden was willing to do so – would have ended up costing Biden serious political capital that he could have used helping the Palestinians in other ways.

One of the main concerns that has been voiced to me by PA officials is the passage by Congress in 2018 of the Taylor Force Act. The Act prohibits providing aid to the PA as long as it continues to offer monthly stipends to families of Palestinians killed while attacking Israelis. The PA will not dare, under any circumstances, cut off these stipends to Palestinian families deemed “guilty” by association. For the Biden-Harris administration to offer economic and development aid to the PA, it would have to work with Congress to amend or repeal the Act.

Once Biden is sworn in as president or maybe even before that date, I can see the resumption of security and administrative ties between Israel and the PA as well as the reversal of the PA’s decision to stop accepting tax funds collected by Israel, on its behalf, and delivered to the PA on a monthly basis. That would be a welcome relief to the tens of thousands of Palestinian breadwinners whose salaries have been halved since May of this year.

Thankfully, Trump and his destructive policies will come to an end in less than 70 days from now. Not only will the United States be rid of a mentally unstable president, but so will the rest of the world.