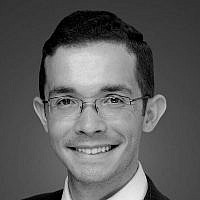 The Blogs
David Billet
Apply for a Blog
Please note that the posts on The Blogs are contributed by third parties. The opinions, facts and any media content in them are presented solely by the authors, and neither The Times of Israel nor its partners assume any responsibility for them. Please contact us in case of abuse. In case of abuse,
Report this post.

The United States is in chaos. Riots and looting have erupted across the country, the economy has been destroyed by the coronavirus lockdown, and the relationship between the US and China seems to become more hostile by the day. While for the past three and a half years the State of Israel has enjoyed America’s unwavering support, that may not be for much longer. If Joe Biden wins the presidential election, America will unquestionably become significantly less supportive of Israel.

In case anyone forgot, Joe Biden is the same man who was the vice president of the administration which established the Iran deal, and helped send $1.7 billion in cash to the Ayatollahs. This allowed Iran to fund terror groups throughout the entire Middle East, including Hezbollah in Lebanon and Hamas in Gaza, both of which regularly threaten Israeli citizens.

Next, in 2016 it is believed that Joe Biden convinced Ukraine to vote in favor of UNSCR 2334, which condemned Israeli settlements in Judea and Samaria. While the United States could have vetoed the resolution, they refused to do so. The Obama administration, led by Joe Biden, not only stabbed Israel in the back at the United Nations, but also worked behind the scenes to help ensure that Israel stood alone.

According to a recent poll by Real Clear Politics, Bernie Sanders supporters make up approximately 32% of the Democratic Party. Prime Minister Netanyahu, Bernie Sanders has openly called you a racist, has expressed a desire to move the US embassy to Tel Aviv, and supports conditioning United States foreign aid to Israel. This faction within the party has already convinced Biden to change his position regarding student debt and healthcare and will almost certainly influence his stance on America’s relationship with Israel.

Lastly, and perhaps most importantly, Joe Biden is 77 years old, at times has trouble completing sentences, and seems dazed and confused during interviews. This means that whoever is chosen as vice president, will have tremendous influence on American policy decisions. As Biden is a leader of the more moderate wing of the Democratic party, he will be forced to select a vice president who can appeal to those who supported Bernie Sanders, a group which strongly and regularly criticizes Israel.

After you have finally established a government, I urge you to not let the first term of the Trump presidency slip away. Find the formula to annex parts of Judea and Samaria, prevent the formation of any Palestinian state, and act in the best interest of the Israeli people, regardless of what the world demands.

About the Author
David Billet is a student at Fordham University School of Law and has a Bachelor of Arts in Accounting from Queens College, CUNY. He is also a political commentator and a published writer and has been featured in the Wall Street Journal, Israel National News and almost twenty other media publications.
Related Topics
Related Posts
Comments