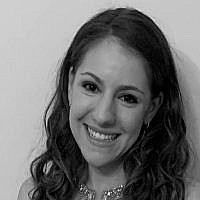 The Blogs
Sarah Lauren Krieger
Apply for a Blog
Please note that the posts on The Blogs are contributed by third parties. The opinions, facts and any media content in them are presented solely by the authors, and neither The Times of Israel nor its partners assume any responsibility for them. Please contact us in case of abuse. In case of abuse,
Report this post.

As an American Jew, I didn’t learn about the royals or care much about them growing up. It wasn’t till February 2019 when I visited London that I viewed royal landmarks and previous to that I watched Harry and Meghan’s wedding and Kate and Williams when they were televised. 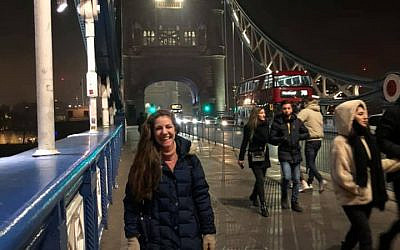 Sarah at the Tower Bridge in London. 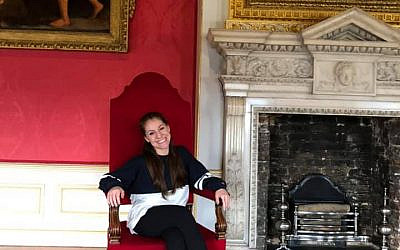 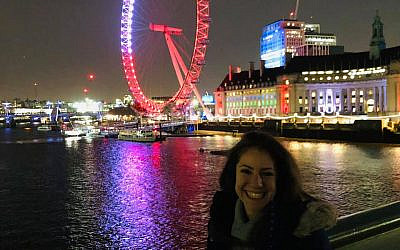 Sarah in the evening at the London Eye or the Millennium Wheel. 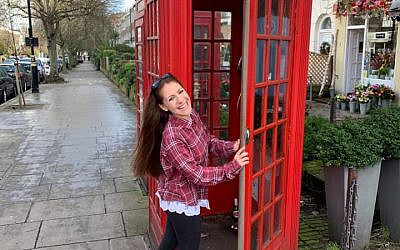 I gave myself a crash course on the royal family reading about them and then watched Princess Diana’s interview With Martin Bashir and finally Oprah’s bombshell interview with Meghan and Harry. I now (and the rest of the world after the latest interview) have a better idea of what has gone on behind the scenes and how similar these ladies’ experiences have been. This latest interview with Oprah came in between the Chagim (holidays) of Purim and Passover. The main characters in these holidays and the women who married into the royal family share some similar qualities. Hold up, while I break it down for you!

Being royal and marrying into the family, they are under so much scrutiny. Like Meghan and Diana, Vashti married into a kingdom and became the Queen of Persia. She refused to attend the King’s banquet and therefore was banished because she didn’t want to show her beauty as the king wished. Maybe it was society’s pressures of what is deemed beautiful that got to her? Diana, Kate, and Meghan have all been written about in the tabloids for their appearances. Like other celebrities, political figures, and folks in the public eye, the women who have married into the British Royal family all have had their fair share of criticism over wearing an outfit that was deemed “too revealing” or a “bold color”. The Royal Family has a modest dress code in some ways, similar to a Jewish modest Tznius dress code. Both dress codes encourage a preference to wear skirts and dresses at an appropriate length with pantyhose to trousers for ladies, as well as hats and head coverings for women. 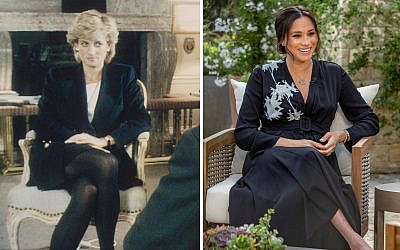 Diana, Princess of Wales, being interviewed about palace life in 1995. Meghan, Duchess of Sussex, doing the same on Sunday.Credit…Tim Graham/Corbis, via Getty Images, left; and Harpo Productions, via Reuters, combined photo from The New York Times

Clearly, Vashti had chutzpah and was a bold individual for respecting herself and knowing her self-worth. Meghan too now would not allow herself to be stifled by the institution she married into. She learned that the institution wouldn’t protect her as she once thought and instead they would pick and choose who and what stories to clear up. The institution is also very close with the tabloids, to stay on the common wealth’s good sides, and media outlets don’t report on news, they make it.

People pin women against each other, there have been plenty of articles written about “Team Kate” or “Team Meghan”. You don’t have to pick a favorite and instead see how they each bring something unique and special to the table! This is how I feel about all Jewish women and the women of the Purim and Passover story, all should be celebrated, each impacting the story. If things were any different, the story we know today wouldn’t be the same. It’s also important to note that you can be inspired by people of all ages and backgrounds.

Obviously, Harry, Meghan, and Archie were in a toxic environment…Just hearing about the conversation about Archie’s skin tone is shocking and uncomfortable, likely Charles made these comments as he stopped taking Harry’s phone calls, although odd that the brothers have a rift between them now. An important takeaway is by sharing your truth, it can make people feel uncomfortable but it’s their responsibility to manage that, not yours even if it shows them in a bad light. Had the royal family wanted a different story portrayed they should have behaved better.

Harry Meghan and Archie now are able to be transparent and have important conversations about race, diversity, being inclusive, and more! Esther through her bravery reveals she is Jewish. She not only is able to save all the Jews, at the time living in Persia, from being slaughtered, but she is also able to educate those around her, that what makes their community special is the diverse people. All should be treated with respect. The system created was to repress them but the system can change!

Megan did such a great job on tour (especially to Australia according to Harry)  and it must have brought back memories of Princess Diana doing well and the world’s attention focusing on her. Charles appears to be jealous and triggered. He thinks everyone else needs to suffer since he has too and that’s part of the process of this family. It is pretty ironic that his son, Williams’s platform with his wife Kate is about mental health. The firm won’t help Meghan and Harry with their issues being written about not only poorly but not true, changing of titles, won’t receive security and racist remarks. I don’t buy that the rest of the family or queen are really that surprised by what occurred behind closed doors. By Meghan and Harry speaking up about their mental health (depression, suicidal thoughts) concerns it is helping others who are also struggling. Princess Diana also helped make discussing struggles like having an eating disorder, postpartum depression, cutting, less taboo and that there is help out there and it gets better. For these reasons, these women did a mitzvah. Esther embodies the same strength in vulnerability as Meghan, Harry and Diana have, all holding their ground while exposing themselves. Mental health and safety come above EVERYTHING.

Diana changed the future and now her son and his wife are continuing that work! The institution cares and is so worried and obsessed with their image, yet not too long ago were they marrying their own relatives. It’s like Diana knew her kids could be cut off from receiving money while working for the Monarchy they were born into. Yocheved from the Passover story went through extreme measures to save her son and had Miriam be the watchdog for her brother. Both women had to have faith and hope that Moses would be found by someone and be kept safe! Diana had to have faith and hope as well that the money she set aside for her children would help them in case they needed it and that her children would find life partners, friends, and community to navigate the challenges of being royal. Diana assisted them as well as Typer Perry and I can only imagine the shock of the family when they learned who he is and how he could provide shelter and security for them, unlike the Royal family. Oprah (and the media deals that were made) helped Harry and Meghan share their story and be able to have important conversations that impact our world today. Oprah continues to bring out the best in each person through her curiosity and empathy. It is inspiring to see her continue to succeed and make history!

Life is unpredictable and not linear and not always fair and this pandemic year has proved that time and time again. Harry and Megan I’m sure never expected life to go this way. They and the rest of society have to unlearn sexism, racism, body image, etc., and find their own path to self-worth by questioning what the patriarchy laid out. They will be remembered for their characteristics even more than what they have achieved.

Lastly, I think Harry and Meghan may name their daughter, Diana like in Ashkenazi and Sephardic Jewish tradition honoring the deceased. It is believed in some ways that the soul of the loved one lives on in the child who now shares that name and will model the same values of the deceased.