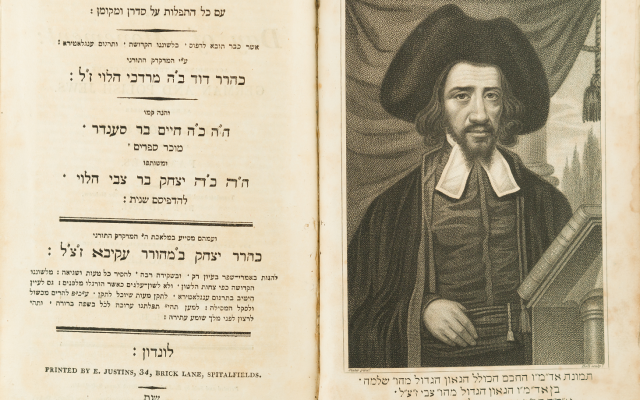 David Levi’s Machzor (illustrated), printed by Justin’s in 1807; Solomon Hirschell's portrait is printed on the left inside cover.

T. E. Lawrence once wrote, “The printing press is the greatest weapon in the armoury of the modern commander.”  Admittedly, this next piece on Anglo-Jewish history, as told through the artefacts in my collection, may not be about full-blown warfare, nevertheless, it does illustrate T. E. Lawrence’s point. Debates and disputes have been fueled by the printing press, and the rabbinic quibbles in the 19th century English Jewish community are no different.

In 1802, Solomon Hirschell, the son of Rabbi Hart Lyon, was elected rabbi of the Great Synagogue in London and, as such, was also indisputably recognized as Chief Rabbi of the German and Polish Jews in the UK. His portrait was even printed as the front piece to the second edition of David Levi’s Machzor (illustrated), printed by Justin’s in 1807.

David Levi’s Machzor (illustrated), printed by Justin’s in 1807; Solomon Hirschell’s portrait is printed on the left inside cover.

Yet, Solomon Hirschell, as we saw with the Great Synagogue’s previous rabbis too, did not escape controversy, and the printing press, that “great weapon,” was about to be used against him.

Levi Alexander, the son of the printer of the first Hebrew-English Siddur was not happy. He was a rival to the printer, Justin’s, and did not appreciate Chief Rabbi Hirschell’s endorsement of his Festival machzor. To him, this in effect, supported his business competitor.

As a result, Levi Alexander put his printing press to good use. In an appendix to his Yom Kippur Machzor, printed later in that same year, he published a virulent attack on Chief Rabbi Hirschell, and claimed that Justin’s machzor was full of errors. Alexander took every other opportunity to attack the Chief Rabbi, utilising his printing press to do so. In a pamphlet entitled “The Axe laid to the Root,” Alexander accused Hirschell bizarrely of cutting down trees in a cemetery. 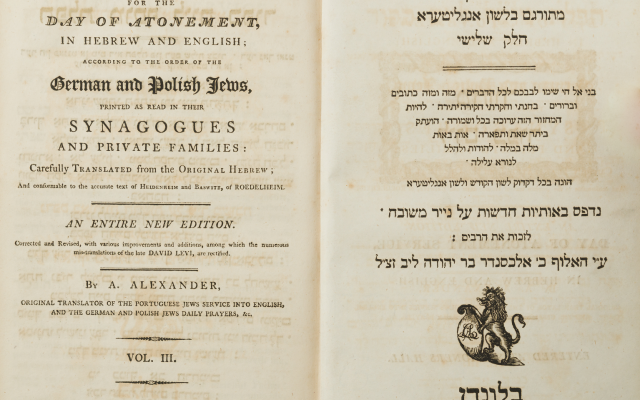 Levi Alexander’s 1807 Yom Kippur Machzor; in the appendix, Alexander printed a a virulent
attack on Chief Rabbi Hirschell and the rival Justin’s Machzor. 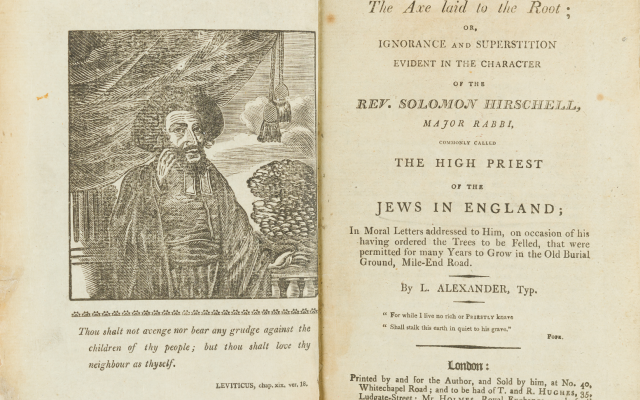 Alexander’s pamphlet entitled “The Axe laid to the Root,” accusing Hirschell bizarrely of cutting down trees in a cemetery.

Alexander was not alone in waging this print war against the Chief Rabbi. The Chief Rabbi gave his haskamah (approbation) to a children’s book entitled “Elements of Faith.” The traditionalist Solomon Bennett attacked the Chief Rabbi on the grounds that the book was of questionable orthodoxy. In his book “The Present Reign of the Synagogue in Dukes Place,” he also criticised the Chief Rabbi for his approbation of the book. 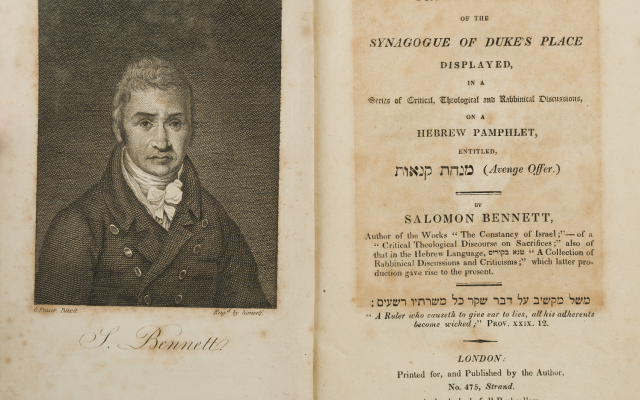 There was a much more critical challenge coming from the opposite direction, a war from those wanting to reform the rabbinic Orthodoxy. Near the end of Chief Rabbi Hirschell’s life, the first Reform synagogue in the UK was founded, creating a fission in British Jewry which continues till today. But that is another story. Let’s discuss one machlokes at a time.