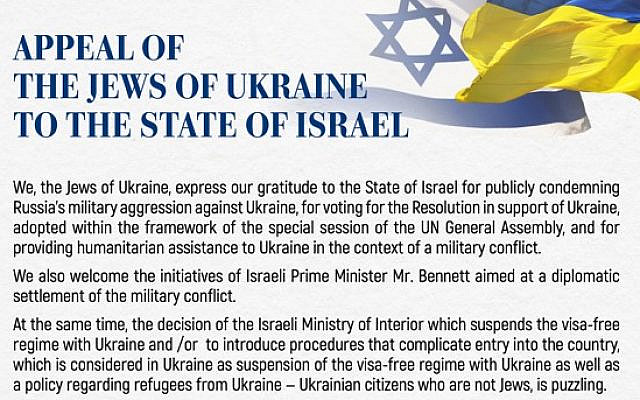 Picture of Jewish Confederation of Ukraine

Eighty-five prominent Ukrainian Jews have called on the Israeli government and the Knesset to cancel additional procedures that make it difficult for Ukrainians, including those seeking asylum from the war, to enter. RBC-Ukraine has the text of the statement at its disposal.

The signatories thanked Israel for voting at the UN for a resolution in support of Ukraine, public condemnation of Russia’s aggression, humanitarian aid and Prime Minister Naftali Bennett’s efforts for a diplomatic settlement.

However, according to the letter, Israel has introduced additional procedures for Ukrainians, making it more difficult to enter the country, even for tourism and business purposes, as well as introduced quotas for refugees. These measures caused a wave of criticism in the Ukrainian society.

“For many years, Israel has been for Ukraine an example of resilience, heroism and selfless struggle for its freedom and independence. And today, when the whole of Ukraine has come to the defense of its independence, many citizens of Ukraine turn to us with astonishment and indignation regarding the above-mentioned decisions of Israel,” the letter reads.

The signatories also reminded the Israeli officials of the persecution of Jews during the Holocaust, when many countries refused to allow Jewish refugees. At the same time, Ukrainians saved Jews, and today there are about 2,700 such Righteous Ukrainians in Ukraine.

“We are convinced that in the situation of war, closing the door to Ukrainians, imposing quotas and other restrictions is extremely inhumane,” said prominent Ukrainian Jews, calling on the Israeli government to lift the restrictions.

So far, the letter has been signed by 85 people representing the cultural, scientific, political and business elite of Ukraine:

Berlin Mikhail – Head of the Supervisory Board, Institute for Road Safety of Ukraine

Kotlyarevskaya Ganna – Member of the Supervisory Board, Jewish Confederation of Ukraine

Kozedubov Dmitry – Member of the Supervisory Board, Jewish Confederation of Ukraine

Morokhovsky Vadim – Head of the Supervisory Board of Bank Vostok

Morozov Yury – Member of the Supervisory Board of the JCU

Nisilevich Svetlana – member of the Union of Theater Workers, President of the Guild of Odessa Entrepreneurs

Pertsovsky Oleksandr – Member of the Board of JSC “Ukrzaliznytsia”

Pinchuk Volodymyr – Honored Builder of Ukraine, Laureate of the State Prize of Ukraine

Sokolovsky Alexander – founder of the Tekstil – Kontakt group of companies

Tripulsky Grigory – lawyer, PhD in Law, Member of the Executive Committee of the Odessa City Council

Yeliseev Oleg – General Director of the telecommunications company TENET, Member of the Board of the Telecom Chamber of Ukraine, Head of the Supervisory Board of the Sailing Federation