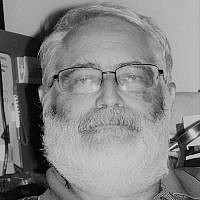 The Blogs
Richard Plotzker
Apply for a Blog
Please note that the posts on The Blogs are contributed by third parties. The opinions, facts and any media content in them are presented solely by the authors, and neither The Times of Israel nor its partners assume any responsibility for them. Please contact us in case of abuse. In case of abuse,
Report this post. 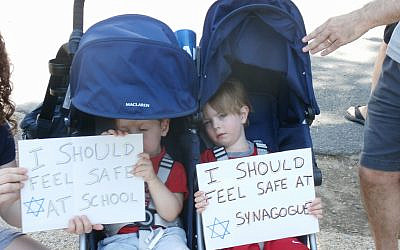 taken with my own camera at event with verbal permission and presence of the boys’ mother.

It had been fifty years since attending my last public rally to protest a worthy cause, that time pressing for permission for Soviet Jews impeded from observing their traditions to relocate to more welcoming lands.  It would happen some ten years later with the children of those emigres shaping modern Israel’s technical, commercial, and military achievements, not to mention innumerable contributors to enriching America.  Fifty years also brought my absence in assembling to oppose the Vietnam War, some very unprofessional police activity, medical inequity, demeaning ethnic stereotyping often encouraged in the public arena though now largely taboo in the workplace, and various expressions of demagoguery that have marred our American History texts since colonial times.  I voted my vision, imprinted in various permanent ways, though rarely voiced my vision beyond small private conversations.

An opportunity to stand among others of similar mind came my way passively as an unsolicited Facebook post from the Jewish National Fund. This unexpected invitation happened to coincide with other personal initiatives of minor daytrips and mingling with strangers.  Registering electronically took minimal effort, merely pack a lunch and some things to do on a shuttle bus, and drive a half-hour to the meeting place.  Parking was costly but less than arranging my own transportation to the Capitol Building would have been.  It was just too perfect an offer to turn down a chance to express public opposition to antisemitism.

This may have presented an issue unique in its own way.  There were people in favor of the Vietnam War, folks who think the police should be free to do what they think they need to do to minimize crime, lots of people who think the free-market America’s medical model gives best results despite its limitations, pillars of the community who think future pillars should be direct descendants of themselves, and the need to elect strong individuals to protect the status quo.  For everything I might like to correct, there are individuals of parallel standing who fear loss of what they have.  Not so with antisemitism.  Except for a few fringe Congressmen, imprinted in their world view and dedicated to representing their perceived constituency, there really are no pubic icons in favor of antisemitism.  When violence occurred in Pittsburgh or my native Monsey or France, nobody supported that.  Even Islamists and some academics do their best to separate their opposition to Israel as a sovereign Jewish majority state from the ability of Jews to attend their worship or pursue their degrees at top universities.  Direct hatred of Jews as a participating morsel in the American ethnic salad has become a public anathema yet incidents have accelerated in frequency and in public visibility.  When people get assaulted with weapons, their traditional Jewish garb providing their identification as a target, America and beyond have a problem that those with just and rightful authority have not adequately controlled.  Antisemitism being the most chronic of global hatreds, opportunities for management or harm reduction seem more realistic than eradication, but advocating in favor of its eventual extinction remains worth pursuing.

Even those like me who haven’t attended public protests personally see them via journalists and now via people with cell phone cameras posting short clips that go viral.  We see and hear posters, invited speakers, a police presence, high volume slogans from the crowd, and occasionally some protesters more dedicated to getting a flat-screen TV from a broken storefront window than the original cause.  Formal events are largely predictable through their commonality, though each depends on its uniqueness to capture attention among those in attendance and those who will comment in various public platforms long after those shuttle buses have returned their passengers to their home cities.

Our event started at the US Capitol, that centerpiece where the noblest thoughts of our American Founders have been variously affirmed, advanced, and too often undermined.  From the street looking uphill its structure evokes reverence though the people who serve there sometimes don’t.  Those thugs who forced their way in earlier this year breeched not only the building but the participatory government that we hold in highest esteem.  Once the bus unloaded its passengers, we sauntered to a grassy mall beyond a pool with ducklings cooling themselves near the edges.

Not to unfairly challenge professional journalists of the Jewish and public press, as a somewhat passive attendee mingling with other Jews that seemed more a cross-section of people who use the equipment at a JCC gym than hurlers of the Jewish ideological hardballs, my experience did not resemble overt, or even subtle activism of America’s political right.  While that may have been the impetus for having a gathering, short-term organizing skills really rest with the centrist agencies of familiar alphabet:  ADL, JNF, AJC, UCSJ, and Chabad which is also an acronym but of Hebrew letters. Moreover, no agency seemed to promote itself at the expense of the rally’s mission.  Jews familiar with American Jewish pluralism could identify the tefillin wrapping offers that characterize a Lubavitch public presence, talesim of rainbow colors with a Mogen David in the center, Zionists with either replicas of the Israeli flag as tallis design or apparel with Tzahal insignia.  Representatives of Jewish Democrats and Jewish Republicans spoke consecutively and cordially from the podium.  The organizers gave out baseball caps to early arrivals with the emblem #NoFear embroidered in white across the front.  And they had the saichel to make the caps a color other than red.  Amid the many fracture lines of American Judaism, the desire to avoid physical assault, vandalism, and verbal slurs seemed important enough to set aside the political animosities for an afternoon blessed by God’s daylight, a location of public sanctity, and the prosperity to meet the expenses that these gatherings entail.

While rallies have speeches, some more poignant than others, there was not a lot of verbal diversity.  Speakers try to rally the audience but we were already rallied before we boarded the shuttle buses of our home cities.  Instead, I think this event impressed me more for who I met, a diversity of dialog that seemed a good deal more profound than the good Shabbos and how’s the kids that comprise Kiddush small talk.  My bus mate was a contemporary from a different state, retired professional like myself, more engaged in Jewish organizations than me.  The bus organizer ran for office once, but from her political comments I doubt I would have voted for her, even in a local election.  Still, she was steadfastly personable and amusing.  A fellow at the bus stop, when asked which shul he attended, identified himself as a recent defector but did not elaborate why.  On the grassy mall, I generally began my random chats with permission to photograph their dogs, kids, the Lubavitch tefillin table, a unique sign or unique t-shirt.  People approached me too, my platelet donor T-shirt forming a camaraderie with other dedicated blood donors.  While looking at posters, I learned that one parent of two toddlers had their Conservative synagogue ransacked.  Others learned from me that one of the Tree of Life victims was a college friend who I read about only once since graduation in our alumni magazine but who I recognized in one minute when the names and ages of the fatalities were published.  One of the speakers, a Chabad Rabbi, had only partially recovered from life-threatening wounds two weeks before as he kept marauders from invading his school in Boston.  We look pretty ordinary.  Some of us see antisemitism on TV, some hear insensitive comments in public places, but a few of us had more of a personal sting.

Lest this become morbid, we also chatted about our synagogues and other elements of Judaism in our home communities.  Those of my generation have kids now in other Jewish communities with tales to share.  My own community represents a small niche of a very wide Jewish America, almost a remote province, but the ability to have those pieces of Jewish small talk recapture some of the Jewish uniqueness of other places I have lived and of universities where young Jews from nearly everywhere gather together both in organic chemistry class and at kabbalat Shabbat.

Speakers, of which I listened to about 60%, had a certain uniformity.  We will not be intimidated by antisemites.  The legacy of George Washington’s acceptance of the Jewish community was not effectively sidetracked by Father Coughlin two generations back nor will it be by that triad of White Supremacists, resentful leftists, or anti-Zionists today.  We will continue to wear Jewish attire and we will seek visibility at our universities.  #NoFear, as the cap says.  What all the speeches that I heard lacked was an assessment of why we are encountering a surge in both physical assault and verbal hostility at this juncture in America’s history.  Tackling this might disrupt the unity of the participants and speakers, yet it seems difficult to really address our challenge without placing it in the context of our political and social realities.  Nobody from the podium wanted to take a chance on this, though everyone in private conversation took a stab at it.  As well-meaning people without expertise, our variety of assessments probably create pooled ignorance, but I think the invited experts let those in attendance down by not confronting this.

Considering the accepted condemnation of anti-Semitism, how might this expression have been made more forceful by our Jewish organizations?  Journalists from The Forward estimated an attendance of 2000.  In some ways it moved from a limited to political gathering to something more reflective of composite Judaism by a form of rescue on short notice.  Had the acronym agencies been the originators, with more time and logistical planning, the attendance could have been far higher and from a geographic representation beyond the mid-Atlantic.

My bus mate asked me on the ride home if we made a difference.  We made a statement probably in excess of the actual attendance, but will there be less publicly expressed antisemitism over the next year or next decade attributable to what we did?  No, we did not do much to have fewer antisemites or to marginalize the ones we have.  I don’t think that’s the metric of this type of assembly.  More likely it will change those in attendance more than it changes our antagonists.  We came as individuals imprinted with our own mostly views from afar.  When you see a Rabbi speaking in Hebrew and still unsteady from requiring advanced medical intervention for his partial recovery or you talk to a person in another town whose shul now places a congregant with military experience and a visible revolver on his belt to sit at the front door instead of worshipping with his minyan, the scope of what we need to overcome moves beyond what we see on our TV and smart phone screens.  If we cannot change the antisemites, we can change ourselves.  This rally, for all its unmet potential, contributed admirably to that vital Jewish initiative.

About the Author
I retired in 2018 as a clinical endocrinologist in the Philadelphia area. Native of Monsey at a time when the Jewish population there was more diverse. Have resided in Wilmington Delaware since 1980, Have maintained a Hormone Happenings column that appears in Medscape. Have maintained my own personal blog at https://furrydoc.blogspot.com/ with assorted mostly irreverent paragraphs
Related Topics
Related Posts
Comments