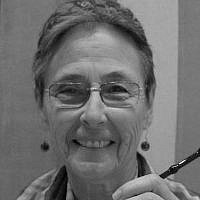 The Blogs
Judith Hollander
Apply for a Blog
Advertisement
Please note that the posts on The Blogs are contributed by third parties. The opinions, facts and any media content in them are presented solely by the authors, and neither The Times of Israel nor its partners assume any responsibility for them. Please contact us in case of abuse. In case of abuse,
Report this post.

“The psalms class, it’s changed me. I see things so differently because of that class and because of the rabbi’s teaching and all the people there and what they bring to it.” *

“Adonai, You answered my cries from the pit and sent psalms class to me.”**

Covid-19 along with March, 2020 came in like a lion, uninvited, mysterious and confusing. And yes, frightening. It was as if a cry came up from land, and we asked, how can we survive alone with danger all around? We also wept, when we remembered how bad things were. [1]

At Congregation Beit Simchat Torah (CBST) the LGBTQ synagogue in New York City all in-person services, classes, and meetings stopped precipitously leaving an enormous void in the lives of the congregants at a time when their daily lives also stopped.  But shutting the physical doors of the synagogue opened the beginning of a new phase in the life of the congregation. Thanks to zoom and other digital venues, classes, services, meetings, and lectures sprung up like mushrooms in moist soil strengthening and broadening the community in unexpected ways. Participants from all over the world joined; classes were over-subscribed; a demand for Hebrew and liturgy classes multiplied. In short, in response to the threat of COVID, this group turned to the synagogue for help fill the void in their lives and the synagogue responded.

As a congregant, I took advantage of many offerings from the synagogue. The most popular class was a Psalms class taught by Rabbi Sharon Kleinbaum, the senior rabbi, a superior teacher and beloved by the congregation. I joined the class both because I appreciate Rabbi Kleinbaum as a teacher and because I have an insatiable thirst for studying anything Jewish. And I was not going anyplace.

Between March 17, 2020, through September 2021 eighty (80) or more people regularly attended a free 45-minute class 4 times a week. Everyone was welcome and one did not have to be a member to participate in the class. The Book of Psalms was selected because it was a favorite of the rabbi and was familiar to the congregation. In addition, the pandemic seemed like a perfect time to revisit the book and expand the congregation’s knowledge since psalms themselves have historically been read at times of trouble, emotional upheaval, and even joy.

The expectation was that we would read each psalm in numerical order taking about a week or each. But as participation increased and time went on it became clear that one week was not enough time for each psalm. The routine developed was as follows: the class opened with a musical version of the psalm in question. Then we read the psalm in English using Sepharia’s translation (Urim Publications’ translations) followed by reading the Hebrew. Much time was spent looking at the Hebrew and trying to understand word choices in Hebrew and in the translations. This process increased the class’s interest in Hebrew as a language and prompted the creation of 6 beginning/intermediate Hebrew classes on Zoom. Depending on who attended on a particular day this conversation could go on and on.

Then we plowed through 4 or 5 translations of each psalm. Sometimes it would take more than a session to get through one interpretation. Often, we were placed in breakout groups to discuss a psalm. This format also allowed for people to meet or to get to know each other better. Routinely the breakout groups reported back to the class a summary of their discussion.

After we sufficiently covered a psalm, class members, having been encouraged from the beginning to create their own psalms, shared them. They used several modalities: writing, painting, acting, and other forms of art. Many of the interpretations were read in class or posted on the class Facebook page. When possible musical versions of the psalm were presented and discussed. The class began and ended with schmoozing.

As the weeks passed I kept looking at the little square boxes and wondering why all these people continued to show up, day in and day out. As a former graduate student, I kept seeing data. I knew there was something out there that needed to be captured but I didn’t know what. So, I decided to ask. With permission from the rabbi, I solicited participants. I was afraid people would be reluctant to talk to me because of privacy but that was not the case. Many volunteered and many more were willing.

I interviewed 25 participants asking open-ended questions about why they joined and why they continued. I plan to interview those willing when the class ends in October, 2021. The interviews were recorded with the permission of the participants.

“Actually, I started coming because it was a place to be at 10 AM after morning minyan. I needed that.” **

“Gave me the structure to my day and something to focus on and concentrate.” **

Many people talked about the anxiety, boredom, and loneliness associated with fear of COVID that forced them to quarantine and changed their daily routine. Things did not feel right internally.

The class gave them someplace to go when there was no place to go. The Psalms class became a safe haven, physically alone, yet with others. The presence of the computer screen with human faces looking back brought the comfort of seeing and being seen.

Connecting with the Group

“I like hearing the works of other members. And that’s also why I keep coming to keep connected with the CBST community. I feel like through the class I am learning more about congregants with the sharing of vulnerabilities; really sharing; getting to know people in a way I never did before. And that’s been meaningful for me.” **

“Psalms class is a connection to a community where people are looking at and wrestling with questions in an honest way.” **

As the days turned into weeks and months a sense of community developed among many of the participants. Many came early and stayed late to talk. The Zoom “chat” was active during the class, giving support to each other in ways that are similar to in-person life. In addition, a Facebook page was set up and there were postings of personal work as well other relevant music and poetry. And whenever anything was posted, classmates made sure that they commented.

Connecting with the Jewish people

“I knew nothing about psalms before, and now psalms are part of my life, and I am a part of the group. Now we do a Shabbat ritual with challah and wine. We never did that before.” **

“Psalms class led me to take 2 Hebrew classes and a class about the siddur. This is the Jewish education I always wanted. People are sharing and talking about themselves and developing a bond that is developing underneath the Jewish studies.” **

“the Jewish learning I always wanted. It is like doing a Jewish studies program without the exams.” **

For most, the feeling of belonging, the interpersonal connection, was the major reason they showed up. But for some, it was only part of the experience. For them learning was paramount. Not just any learning but Jewish learning.”

It was more than just learning about the Psalms. Being stuck at home and studying Psalms highlighted their ignorance of Hebrew and desire to know more. In response, the synagogue offered several levels of beginner’s Hebrew. Many said learning Hebrew strengthened their connection to their Jewish heritage. They were thrilled to be able to read a psalm in Hebrew or sound out a prayer.

Many in the class started going to virtual Friday night services, bought Shabbat candlesticks, and made sure they had challah every Shabbat. They believed this change was related to the psalms class that engendered the feeling of connection with both the community and Jewish people. Others started attending morning minyan at an online Conservative temple. Others added to their Jewish education by participating in other virtual classes broadcast from NYC as well as from around the world.

“It’s like something bigger is here. More than just me and another person. But me and the group, or something else. Even the connections I made have that feeling of being large. Touching something.” **

“I understand now the god of the psalmists better. I don’t think their god is my god but I understand the need for support and comfort.” **

Spirituality, a concept hard to define, was referred to by many participants. Studying the psalms, participating in religious rituals for the first time on a consistent basis, and relating in meaningful ways to people in the class infused them with a sense of some kind of higher power, energy source or universality.

It was neither reading the psalm in Hebrew nor examining various interpretations of the psalm that prompted the turn of the interview towards spirituality. Writing their own psalms or creating other art forms prompted by the psalms and then sharing them with the class had an unexpected impact on members of the class. The sharing enhanced the feeling of connection within the class and also connected them with the long history of the psalms.

The level of personal honesty and openness demonstrated in the offerings was startling and fostered bonds among class members. They felt that the offerings by classmates brought them closer to each other. And from my experience I agreed. I wrote about 10 psalms during the class and the feedback I received from my classmates strengthened my bond between them. I felt special when there were Facebook comments about what I posted. And when I read my offering, words in the chat were warming.

As time went by there were more conversations about god and questions about attributes of God and how to express ideas about god in authentic terms. They also came to understand the universality of the messages of the psalms and how their offerings were part of a generations-old conversation between the text and Jewish people.

“Considering my 18 months in this wondrous free of charge Psalms class, I will leave it equipped with a revived joy of Jewish learning and a renewed desire to keep writing.” **

Importance of My Findings

My findings demonstrated the importance of community in maintaining and creating a connection with Judaism. It is the glue that creates and maintains Jewish identity. Many people in the sample had very little Jewish background prior to the pandemic but during the year this class and other classes including 6 classes in Hebrew were offered in response to needs expressed by the members as they have increased their Jewish literacy and sense of connection with individuals and the synagogue.

At a time when there is a fear that the liberal Jewish community will not survive, CBST has grown. It has grown by providing people what they need, a sense of community. And they provided it within the context of a deep dive into Jewish text and tradition.

I have a Ph.D. In Psych-Mental Health Nursing from Indiana University. My dissertation was a qualitative study on alcoholics in sponsor relationships. I have several scientific publications.

About the Author
I am an ordained Kohenet from the Hebrew Priestess Institue and a practicing registered nurse. I am an active member of Congregation Beit Simcha Torah in NYC, a published poet and student of all things Jewish.
Related Topics
Related Posts
Comments