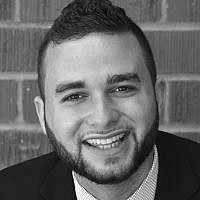 The Blogs
Tal Edelstein
Apply for a Blog
Advertisement
Please note that the posts on The Blogs are contributed by third parties. The opinions, facts and any media content in them are presented solely by the authors, and neither The Times of Israel nor its partners assume any responsibility for them. Please contact us in case of abuse. In case of abuse,
Report this post.

Last week I was in Washington, D.C. for a pro-Israel advocacy and leadership conference, where over 420 of the top Israel advocates on U.S. college campuses learned how to be the best and strongest advocates for the State of Israel – the ancestral Jewish homeland.

During this 4 day conference, there was a clear and constant message presented to us: one will undoubtedly encounter inhibitors to the fight for the Jewish state, but it is critical to continue to focus on how incredibly marvelous Israel is. Just as has been the case throughout the Jewish people’s 5,776 year history, there will be people who nitpick at everything the Jews do. No matter how much right they do, there will be people who will find something to point out that the Jews do wrong, and then put that component center stage in the world theater. This has not changed since Israel’s rebirth in 1948, and won’t unless we change the nature of the conversation.

I attend college at Cal Poly San Luis Obispo, where there is an option to take a few classes pass/fail, meaning that if you get a C- grade percentage or better in the class by the end of the quarter, you pass the class, and if you don’t, you fail. Let’s say we were to use this method to grade every country in the world based on overall performance. In this global classroom, many in the international community use the C- grade as the pass/fail benchmark for world nations, but to use an A grade as the pass/fail benchmark for Israel. Not only that, but Israel is graded using this assessment on the first day of the fall quarter of its freshman year. Israel is 67 years old. Let that sink in a bit. When the United States was 67 years old, the country still had slaves and only free white male property owners could vote. Sri Lanka, also 67 years old today, continues with its arbitrary arrests against activists in the 1983-2009 Civil War and is in the midst of a crackdown on independent media and human rights activists. The Arab countries of the Middle East, mostly new creations after World War I, are quickly being torn apart by internal conflicts, having their borders and governments become quicksand-fluid. And then there is Israel. Name one other country in the modern world that in its first 67 years has produced as many medical, scientific, agricultural, and technological inventions and has been so progressive in its democracy and civil rights all while facing constant threats of annihilation from neighboring countries. I bet you can’t. Do you see how this standard imposed on Israel would put it at a disadvantage before it even turns in its final research paper? Now don’t get me wrong. I am not saying that we shouldn’t critique Israel just because it’s such a young country, otherwise it wouldn’t continue to improve. If no one ever mentioned to the manager at the local supermarket that one of the front wheels of a shopping cart was squeaking, it would never get fixed. What I am saying is that if the supermarket had just opened, you wouldn’t call for its shutdown just because it has a few problems. Please, give us some time to grow. We are already a truly remarkable feat, but give us some time to get to that A+ grade you are so desperately looking for from the Jewish state.

But still, even with this premature grading, Israel is easily passing the class. Just take a look at the often criticized Israeli Defense Forces. Critics seem unwilling to acknowledge the heaps of praise the IDF receives for its outstanding techniques used in contemporary urban warfare such as the “knock on the roof” method or the phone calls or the text messages or the leaflet droppings used to warn their bombing targets. But worse than that, critics seem completely unaware of Israel’s progressiveness within the army. In Israel, gay people are unquestionably allowed to serve in the army, while they would be undoubtedly hung in Iran. Women now make up a majority of the IDF’s officers, while they are not even allowed to drive cars in Saudi Arabia (the chair of the UN Human Rights Council, no less). More recently, Israeli citizens with autism formed a new army unit – something unheard of in today’s world militaries – to assist their country in ways previously unimaginable.

Another contentious topics in Israel is the rights of Arabs. Here is the fundamental truth: Arab rights in Israel have been in an upward, progressive trajectory over the last 67 years. In 1956, Israel’s 8th year, Arabs were imposed to curfews. Today, Arab Israelis are members of parliament, serve as judges in the Supreme Court, are doctors and professors in Israel’s highest institutions, and freely live in all other walks of Israeli society. Even in the West Bank, Palestinian Arab rights are on a positive trajectory. At the start of the 1995 Oslo II Accords, there were five major topics of negotiation: security, borders, refugees, Jerusalem, and surprisingly, water. When Israel won the West Bank in 1967, there were 708 Palestinian villages in the region, 4 of which had running water. Four. Today, about 96% of West Bank Palestinians have running water in their home. Since the Oslo II Accords in 1995, Israel has gone so far above and beyond their requirements in assisting the Palestinian Arabs with their water crisis that this fifth component of the peace negotiations has been almost completely taken off of the negotiation table. Let’s not even forget to mention that the Oslo Accords with Israel led to the formation of the Palestinian Authority which governs over the Palestinian population in the West Bank and is the first government the Palestinian Arabs have ever had in the history of the world.

When Weather.com tells us that sunrise is at 6:49 AM, we don’t expect the sun to all of a sudden appear at the top of the sky at 6:49 AM. It’s a process. The moon falls, with a transition into dawn, and then the sun slowly comes up. It doesn’t instantly jump from one extreme to the other, but we do not critique the sun for moving too slowly and understand that the sun is moving forward. Just as with physics, we can only judge the world’s governments based off of their forward progress – and Israel’s rapid forward progress, especially in regards to Arab and other minority rights in Israel, is unparalleled. And yet, its counterpart Arab nations refuse to match these efforts. Can you tell me how many Jews or Israelis live in Iran? Iraq? Pakistan? Syria? Gaza? How many Israelis would be allowed to live in a proposed Palestinian state in the West Bank? Can you tell how many Arab countries refuse to even let Israelis in to their country?

Throughout the conference, we focused on how to advocate from this positive position, rather than from the point of fighting those who seek to inhibit Israel. But suddenly, on the last day, the conversation turned from waging war for Israel, to waging war for peace. We were told that pro-Israel conferences always end with a discussion about how, with all of this knowledge we now possess, we can be strong advocates for peace between Israelis and Palestinians. Because at the end of the day, more than anything else, that is the ultimate goal of Israel: love and peace for all. No matter how much innovative and civil progress this tiny new country continues to make, Israel’s ultimate progress is in its pathway to peace. That’s what makes Israel so strong, so formidable, such a bright light in the darkness of the world.

We should stop thinking about what the inhibitors will say, or how we will respond to what they say. We need to start publicly displaying our affection. Loud and proud.

I decided that it would be fitting to make my last stop of this trip the Holocaust Memorial Museum. I threw on my AEPi jacket – the letters for the Alpha Epsilon Pi Jewish fraternity – and walked down towards the museum. I wandered aimlessly through it until I arrived at an exhibit that had similarly stopped me in my tracks two years ago when walking through the Majdanek concentration camp in Poland. Covering the floor, all over one of the rooms, were hundreds of pairs of shoes that were once worn by victims of the Holocaust before they were murdered. I bent over the railing, captivated by them. Deep in thought, I felt a tap on my shoulder. A man pointed at my sweatshirt and whispered, “AEPi University of Southern California, 1992,” He put his hand out and smiled as we did the fraternity’s secret handshake. As he walked back into the crevice of a makeshift Auschwitz barrack, he remarked, “How great is it that we can proudly have a Jewish fraternity today, huh?”

More so than that, my Brother. How great is it that we can proudly have a Jewish state today.

About the Author
Tal Edelstein was born and raised in Tivon, Israel before moving to Los Angeles, California at the age of 12. Tal works for the Hillel at the University of Pennsylvania as the Springboard Ezra Fellow and Israel Engagement Specialist. He graduated from Cal Poly San Luis Obispo, with degrees in Business Finance and Global Politics. He was the Founder and Chairman of the on-campus pro-Israel club, Mustangs United For Israel, as well as the Founder and President of the Mustangs Israel Public Affairs Committee.
Related Topics
Related Posts
Comments