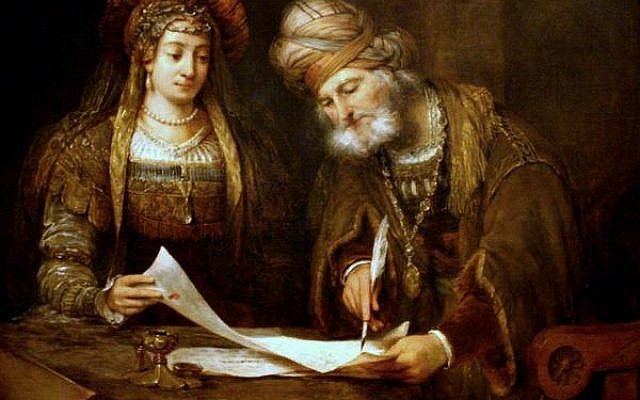 Hadassah, an otherworldly beauty, just as the myrtle has a pleasant smell, but lacks taste. Myrtle is associated with purity, faithfulness, fruitfulness, just as Hadassah in a pure sense would love her people, be faithful to them and give posterity to Israel. However, she is known as Esther, which is also myrtle or star of the desert, just as Esther was a star in the desert for the Hebrew people.

Hashem through Esther ratifies His covenant with the sons of Yaaqov and through Benjamin, his youngest son – with Rachel; for Esther was of this tribe along with Mordechai. Likewise, Mordechai was descended from King Saul and it was he who vindicated Saul with regard to the triumph over Agag, in this generation against the Agagites of Haman.

Haman represents the evil in this world and the hatred against the Jewish people, just as Agag, king of the Amalekites, had constituted himself as an enemy of Israel and his goal was the extermination of the children of Abraham. But Esther would not allow it, just as her ancestors would not allow it. This “star of the night” that was Esther, the most beautiful woman of her generation, was raised by her cousin Mordechai, who represents good, as opposed to Haman, and who represents with Esther the love for her people, a pure, real and tangible love.

The exile in Babylon could have been the end of the nation of Hashem (of the kingdom of Judah), since the assimilation and the attacks on the Jews for their spiritual difference could have ended in the dissolution of the people.

Esther was so beautiful that she immediately caught the attention of King Ahasuerus. But, Esther was not only beautiful in figure and beautiful in appearance, she was also humble of heart and her faith in G-d was infinite. Esther’s case is particular even in this sense, for physical beauty in a human being can turn into conceit and arrogance, but this was not the case with Esther or Hadassah.

Hashem’s divine providence towards His people is implicitly demonstrated in the story of Esther and Mordechai, from beginning to end, can be perceived as the Shechinah – the Divine Presence – demonstrating the divine spark that radiated to Esther; for, the restoration of the world must be perpetrated not by those who live outside of it or at a distance, but by those who are within it, enjoy it, understand it, and know it.

Similarly, the story of Esther demonstrates to us her wisdom, that wisdom which Hashem bestows upon her and which it is up to her to put to good use. Esther became a queen, which meant all kinds of privileges for her, and regardless of everything, she could have chosen her personal benefit over that of others, using an intelligence only for herself, i.e. selfish. However, she was wise indeed, choosing to risk her life to save Mordechai’s life and that of all her people. A greater sense took precedence over personal sense.

Thus, the evil Haman perished in his attempt to exterminate the Jews, and Mordechai and Esther gave posterity to their brethren, the peace and harmony necessary to prepare the way for the world to come. May the story of Esther be apprehended by our generation and those that follow, so that miracles in HIS name will continue to be evident until the coming of the Mashiach.