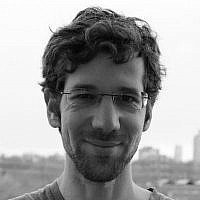 The Blogs
Ori Werdiger
Apply for a Blog
Please note that the posts on The Blogs are contributed by third parties. The opinions, facts and any media content in them are presented solely by the authors, and neither The Times of Israel nor its partners assume any responsibility for them. Please contact us in case of abuse. In case of abuse,
Report this post.

Rav Yehouda Léon Askénazi, also known as Manitou (1922-1996), was one of the great thinkers and leaders of French Jewry in the 20th century. Born In Oran, Algeria to a family of kabbalists, he arrived in Paris at the end of WWII and quickly became an influential voice in the Jewish community. While Askénazi moved to Israel in the late 1960s, he continued his teaching and interfaith activities across the Francophone world for the rest of his life.

The following is a translation of an excerpt written in French and published in Ki Mitsion II (Jerusalem: Foundation Manitou, 1997), pp. 153-156. I would like to thank Elyakim Simsovic for his kind permission to share my translation online.

Purim and the Jewish question

On the 14th of Adar we celebrate the holiday of Purim, which commemorates the deliverance from the menace of destruction which threatened the Jewish community of the Persian Empire. This happened in the time of Mordechai and Esther, Ahasuerus and Haman, and in the time of the founding of Judaism.

The era up until the end of the first Temple period, four centuries before the Common Era, was that of the Hebrews. The Babylonian exile, in fact, ended the Hebraic period and opened that of Judaism, that is, many centuries before Christianity. As the first verse of the book of Esther says, the major Jewish communities at that time where located within the hundred and twenty seven provinces of the Persian Empire, from India to Ethiopia. Hence, it is in that Empire, at the time of the minister Haman, that the issue of the “statute of the Jews,”[1] that is, “the Jewish question,” was raised.

Indeed, this expression has a very contemporary connotation; however, one can clearly notice in rereading the Bible, in rereading the book of Esther, that the question of the “right of living” was posed in regards to this people [the Jews] for the first time in a country which was constituted as a centralized state, that is, an empire. Since then, the Jews in the diaspora experienced the “Jewish question” under a variety of forms and appearances, dependent on the political style of the empires which succeeded each other [through history]. However, it is the book of Esther which provided the essential scheme, of this question imposed on the Jews and manifested in the following alternatives: either to renounce the particularity of their identity, or to be condemned to destruction – which in current times was called “the Final Solution.”

This is no doubt the reason for the habit of the Jewish tradition to give the name “Haman” to all those who undertake to bring on the end of the Jewish people. This is also why Purim (the time of the commemoration of the deliverance in the holiday of Esther) is precisely a celebration of the survival of Israel [through history], in the face of all of the attempts devised by the empires to solve the problem of the “Jewish question,” that is, the existence of the Jewish People: either by the violence of massacres, the seduction of assimilation, or the call to a conversion into the dominant religion or ideology. With time, the holiday of Purim became charged with this experience of the survival of Israel, repeated thousands of times, despite the incessant repetition of this impossible “Hamanic” utopia which relies on a belief in the possibility of an end to Israel, [and the possibility of] bringing on and undertaking this end. Hence, the joy of Purim, as the joy of survival itself, is also the very experience of the eternity of Israel.

Here is how the Midrash [Megilah, 13b] describes Haman’s enterprise: He decided to inquire, by casting a lot, into which period [of the year] is the most favorable for the end of the Jewish people. And the lot designated the month of Adar, which is apparently the end of the Jewish year. The commemoration of the beginning of the history of Israel is, in fact, in the month of Nissan with the exodus from Egypt, and the cycle of duration which began at that time had its symbolic ending in the month of Adar. According to Haman, the history of Israel, like [the history of] every other culture and every other civilization, had a beginning and an end, a one o’clock and a twelve o’clock. And, it was at the end of the era of the Hebrews[2] when Haman believed he found the twelfth hour of Israel.

Furthermore, the Midrash adds, Haman was even more assured that the casted lot would favor his project because it is precisely in the month of Adar that the death of Moses occurred. What emerges from this Midrash is precisely the theme of the end of Israel, which Haman, the descendant of Amalek, descendant of Esau, the rival of Jacob, looked for. Just like the [biblical] time of Amalek, Haman looked for a time of weakness, of an eclipse of the genius of Israel, as we say today, a time of dispersion and assimilation, in order to find in that time the source of the possible ending [of the Jewish people].

However, the Midrash adds, Haman forgot that the day of Moses’s death, the 7th of Adar, is also the same day as Moses’s birth. That is, within this symbol [of Moses’s death and birth] the Jewish year does not have an end, rather, it recovers the principle of its eternity at the very moment of its unfolding.

The Hebrew being [the lived experience of being a Hebrew] reaches both the fulfillment of its identity as well as the unfolding of its genius and ushering in of Jewish history at the same time.[3] Hence Jewish history cannot be said to have a beginning and an end. [Since the time of Esther] this is the foundational “eternity” of the testimony of Hebraic consciousness,[4] as it persists through the eras of each civilization, which, as history shows, themselves have a beginning and an end.

[1] Askénazi refers to a group of anti-Jewish laws instituted by the Vichy regime (1940-1944) which were designated by this term.

[2] According to Askénazi, the Babylonian exile signals the end of the Hebrew era and the beginning of the Jewish era in the history of the Jewish people.

[3] In this sense, Purim stands at the historical meeting point where the Hebrew era ends and the Jewish one begins.

About the Author
Ori Werdiger is a proud Jerusalemite. He is currently pursuing his PhD at the University of Chicago's Divinity School. He is writing his dissertation on the thought of the Algerian rabbi and leader of post-war French Jewry, Léon Askénazi (Manitou).
Related Topics
Related Posts
Comments