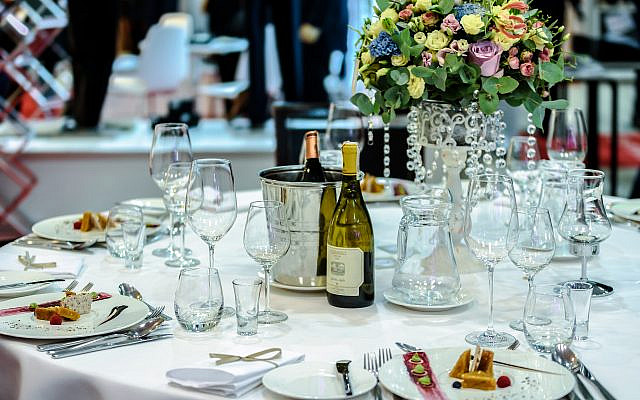 The theme of seudot (feasts) is found throughout the Purim story of Megillat Esther in various contexts. The megillah records Achashverosh’s national banquet in the beginning, followed by several other meals throughout the story: Esther’s coronation, the approval of Haman’s order to kill the Jews, and the two-part meals Esther organized with Haman and Achashverosh to save the Jewish People. Additionally, near the end of the megillah, Esther and Mordecai “made [the fourteenth of Adar] a day of feasting and merrymaking” (9:17). The contrast between the seudah at the onset of Megillat Esther compared to its last mention near the end is striking.

Achashverosh’s original party was a gala like no other: “For no fewer than a hundred and eighty days he displayed the vast riches of his kingdom and the splendid glory of his majesty” (Megillat Esther 1:4). Revealing a grimmer side to this lavishness, Rabbi Yosi bar Chanina says in Masechet Megillah that this pasuk teaches that Achashverosh wore the Kohen Gadol’s (High Priest) special clothing from the Beit HaMikdash (Temple), the latter of which was destroyed 50 years prior (12a). The Gemarah also notes that the goblets and vessels of the Beit HaMikdash were being used by the guest of this festivity. Can we think of a greater desecration to Hashem and the Jewish People than desecrating and defiling the holy items from the Beit HaMikdash for Achashverosh’s cesspool?

What makes this “seudah” even crazier was who came to celebrate. Nili Salem shared a powerful take on this in the name of Morah Leah Golomb. At this festivity — which ridiculed our national identity, mocked the demolition of our peoplehood from Israel, and went against every value we held dear — we were there partying. As Megillat Esther says, “In the third year of his reign, he made a banquet for all his princes and his servants, the army of Persia and Media, the nobles, and the princes of the provinces [who were] before him” (1:3); everyone came, including the Jews. We were so broken, Morah Leah says, that we were celebrating our own demise, the ruining of ourselves as a people. Our national self-worth was devalued to nothingness.

Nili also notes that at that same party, while we were neglecting our purpose as a people, Hashem was unraveling his plan to save us from our end; the saga with Vashti happened shortly after, unraveling the story of Purim that saved the Jewish People.

Every Purim, we hold our own seudot, following the decision in Megillat Esther mentioned earlier. Of course, we rejoice through meals for many things in Judaism, but this seudah seems to have more significance than that. Perhaps, the Purim seudah is also functioning as a type of teshuvah (lit. repentance). Rav Kook writes, “One must understand the profound nature of teshuvah. Teshuvah should shine so powerfully that remembering a sin actually awakens a feeling of profound joy. Joy comes from the knowledge that by doing teshuvah, one gives value and purpose to one’s past mistakes (“Orot HaTeshuvah” 7:7).[1]

When we celebrate Purim through our seudah, it’s as if we are rewriting our roles in the seudah of Achashverosh. Our seudah allows us to reimagine our values through the same means, a glorious banquet, that almost brought about our own destruction. At this seudah, when we reflect on our victory, we do so through the lens of Hashem; we no longer drink to our demise, rather we strive forward as a people of Hashem, seeking to bring His light into a dark world.

[1] As translated by Rabbi Ari Ze’ev Schwartz in “The Spiritual Revolution of Rav Kook,” p. 65