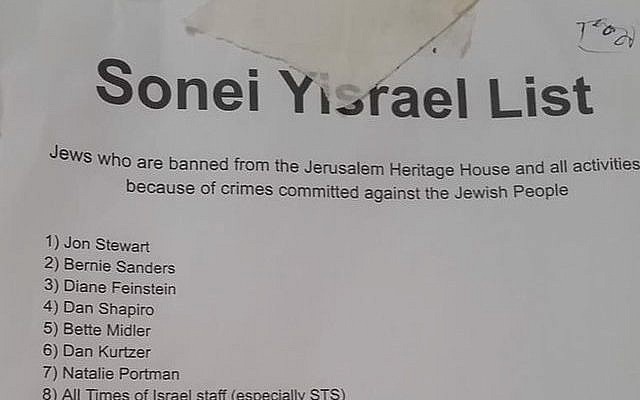 Partial list by the Jerusalem Heritage House of those not welcome there, August 13, 2018. (Jacob Kornbluh on Twitter/via The Times of Israel)

I have always feared lists and I blame my late grandmother for my anxiety. She was German and had lists for everything, including one for those who called her on her birthday with their best wishes. I have no idea what she did with the papers or what became of them when she passed on, but somehow her practice instilled in me the belief that lists are not to be trifled with.

One particular birthday (she was 87 years old), I neglected to call, as I knew that we were meeting for dinner later that day, and thought that I would wish her a happy birthday when I saw her. It was my mother who pulled me aside to break the news that I was not on my grandmother’s list. I wasted no time and quickly called her on her mobile phone (she was sitting opposite me at the table). Although she answered my call, she made it patently clear that this year I had missed the cut-off. And she was disappointed. It was horrible. And I don’t even know why.

Which is why I am more than a little anxious around all the lists that are floating around Israel right now.

It’s all getting a bit complicated. And even a bit worrying.

The latest edition to the “list of the damned” has been published by the Jerusalem Heritage House (Ed: not to be confused with the Heritage House). They apparently will not allow access to some “Israel haters” because of “crimes committed against the Jewish people.” All the animate on the list happen to be Jewish and include Jon Stewart, Bernie Sanders, Natalie Portman, and Bette Midler (among others). The inanimate include The Times of Israel and CNN.

Whereas the likelihood of Natalie Portman seeking refuge at the Jerusalem Heritage House is slim to none, I can imagine Bernie Sanders as a bit of a hostel-goer himself. He might in fact be the only person in danger of being impacted by the hostel ban. And although I am no fan of the man (to say the least), I would still hate to see him banging on the door sadly, with his old sad spectacles, hoping against hope for admittance. It would be like his bid for presidency all over again.

I keep imagining that it were me who was trying to check into a hostel that I had not heard of prior to yesterday, only to be told that both Bette Midler and I were not welcomed there. It could really remove the wind beneath anyone’s wings.

Not only can one now be turned away at Ben Gurion airport (or at least interrogated) when visiting Israel (ask Peter Beinart), but one now might well be denied hospitality after the journey. Add that to the blacklist issued by the Rabbinate a few months ago and one could hardly be blamed for becoming a little anxious. Especially if we have had a bad experience with lists earlier in life.

Every country has the right to deny access to someone whom they consider dangerous. And every country does this. I imagine that every institution has a right to determine who it allows through its doors. And they do. And, I imagine that the Rabbinate considers it their function to determine which rabbis around the world are of a standard that they adhere to. But it doesn’t mean that it’s the smart decision to do this.

Israel is fighting a war on numerous fronts. Not only geographically, but also with regard to BDS and with regard to its global image. A military strategist on my morning show in South Africa explained to me that the term they use is “swarming.” This is what happens when a country is attacked in many ways from all sides. The result is often the tendency to “lager” — to shut out the world and to feign disinterest in all but the essential military conflicts.

Israel is a democracy. It values free speech. And although that isn’t a license to allow hate speech or to allow speech that incites people to violence, it is still a value worth protecting.

It is time to reduce the lists to those who really want to cause damage. It is time to recognize that the PR war is important and that the “circling the wagons” approach is not going to win out. It is time to look at the values of the country and to stand by them. Even if it is so much easier to grab yet another piece of blank paper and a pen and start yet another list. If we don’t reconsider the approach, I fear that the lists will simply grow, until all of us, for reasons we might or might not understand, will not be able to check into a hostel that we had never heard about until yesterday.