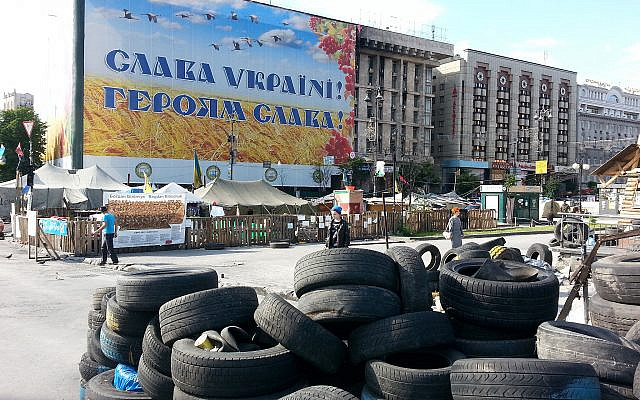 Kiev 2014, after the coloured revolution for a free Ukraine

Apparently – at least for the moment – Russia’s President Vladimir Putin has changed his tactics. Instead of invading Ukraine, he has now de-facto annexed the Ukrainian regions Donetsk and Lugansk. What will be his next step and what should the West do?

It looked like that Putin was going to pursue the traditional approach of replying to an alleged attack by Ukrainian forces by conducting a full-fletched military invasion, with the larger part of his conventional forces currently deployed at the Russian-Ukrainian and Belarussian-Ukrainian borders. This is what Putin did in 2008, when Russia’s army invaded Georgia, after alleged artillery bombardments by Georgian forces on Russian troops. However, once more, the shrewd fox Putin surprised the West: instead of a military attack, Putin recognized the ‘independence’ of the separatist Ukrainian regions of Donetsk and Lugansk, which have been in conflict with Kiev since 2014, after Russia annexed the Ukrainian region Crimea.

Putin’s recognition of Donetsk and Lugansk follows another pattern of his long-term objective of restoring the Soviet-Russian empire: undermining independent former Soviet republics, by annexing parts of their territory, to an extent that such a state is just a hull, incapable of existing as an independent country. Why a pattern? He did exactly the same with the other former Soviet republic that aspires to join NATO and EU: Georgia. After the August 2008 war of Russia against Georgia, Moscow also recognized the independence of the Georgian separatist regions, Abkhazia and South-Ossetia.

What can we expect for Ukraine when Putin follows his ‘Georgian’ approach to separatist regions? As with Abkhazia and South-Ossetia it is likely that Russia will permanently deploy its armed forces in Lugansk and Donetsk. Putin’s announcement of deploying ‘peacekeeping’ forces in these two regions actually means the start of this procedure. But this is just the beginning. The Georgian separatist regions are de-facto annexed by Russia: for energy, water, etc. they are depending on Russia, and the political leadership of these regions consists mainly of Russians. This is also likely to be the foreland of Donetsk and Lugansk; they too will be incorporated into the resurrecting Russian empire. What will be Putin’s next step? As the Georgian regions Abkhazia and South-Ossetia demonstrated, they gradually expanded their territories, consequently, affecting the territorial integrity of Georgia. Putin can do the same with Lugansk and Donetsk: further land grabbing. Additionally, his armed forces or the de-facto armies of these regions can conduct attacks on Ukraine, in order to destabilize that state even more.

What should be the reply of the USA and Europe to Putin’s policy of land grabbing? As I stated before, diplomacy and sanctions are not effective, only a tough policy. The UN Security Council (UNSC) is discussing Putin’s recognition of Lugansk and Donetsk, but the result will be zero. International law exists by the grace of the big brothers, Russia, China and the USA. Russia has a veto power in the UNSC, hence nothing will stop Putin from his current course of action. Then, the West. Once more, the USA and the EU have announcement economic sanctions against Russia. This too, is a failing approach. What has been the result of the Western sanctions against Russia for its war against Georgia in 2008 and annexing Ukraine’s Crimea in 2014: nothing at all, Russia still occupies parts of these countries! A couple of days ago Ukraine’s president, Zelensky, asked NATO when it will allow Ukraine to join the Alliance. That is the crux: Ukraine (and Georgia) as NATO members is the only way to stop Putin from undermining these states. The West continuously stresses the independence and sovereignty of these two states. But sanctions against Russia and NATO-forces deployed in neighbouring countries don’t stop Putin, as we see today. For the sake of a peaceful and secure Europe it is high time that the West instead of hollow statements takes a firm step in stopping Putin’s aggression: only Ukraine as NATO member can achieve this!