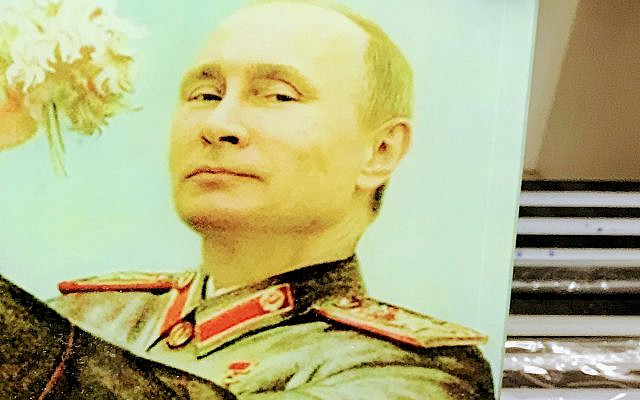 Even though Yom Kippur has passed, as Jews, we always believe that there is time to walk back from the precipice. Thus, with the risk of “nuclear Armageddon” now the highest in sixty years since the Cuban Missile Crisis, there is no time for Putin to waste in ending this needless war in Ukraine and the proxy war with the West.

For Putin, it all seemed like no big deal in Ukraine: Superpower Russia is fighting little Russia (i.e., Ukraine). Russia after denuclearizing Ukraine in 1994. Russia with 40 miles of armor heading towards Kyiv. Russia with the largest land mass of any country in the world. Russia leveraging their “energy weapon” against Europe. Russia with more than a decade of military modernization. Russia with the people under dictatorship and censorship and no one but Putin in the driver’s seat. Russia after taking Crimea and large areas of Donbas in a 2014 blitzkrieg. It all should’ve been as easy as pie to now take the rest of the Ukrainian enchilada.

But as we know, the U.S. and NATO stepped up with sanctions and loads of weapons and assistance to Ukraine. Crucially, as we know, it has been the HIMARS multiple launch rocket system that can hit Russian command and control, ammunition depots, transport hubs, and troops with pinpoint accuracy. Now, the Russians have been hightailing it out of hotly contested areas as fast as you can say “retreat!”

Of course, Putin is loosely and irresponsibly playing the nuclear card and threatening to escalate in order to deescalate. More likely, as I’ve written previously, he will opt for a convenient accident at the Zaporizhzhia Nuclear Power Station. It will have the same dramatic and deadly effect of shocking Ukraine and the West to think twice about continuing the fight with Russia as a tactical nuke, but with plausible deniability for Putin (“Who us do something like that, never! It’s all a plot by the Satanic West!”). However, even that will not save Russia from a humiliating battlefield defeat in Ukraine.

At some point, Putin will need to think about the error of his ways in starting this war in Ukraine. He underestimated the enemy. He overestimated Russia. He ignored the corruption of the Russia oligarchs who pocketed the money from his military modernization and instead produced garbage for the warfighters. He overplayed the military drama of encircling Ukraine and amassing his forces on their border to scare them into submission. He underplayed the low and sinking morale of the Russian troops who haven’t fallen for his propaganda of dangerous Ukrainian neo-Nazis and threats to Russian speakers and the culture of its people living there. Despite Putin’s repression of the people, the media, and any dissent to his military ambitions, Russians are being sent to fight and die in Ukraine for nothing, and many seem to know it and are running for the border to exit.

Regardless of his immense power, Putin is 70 years old now, and no one is ever too old or smug to ignore when they made a mistake. The toll of Putin’s mistakes is becoming extraordinarily high. By amplifying it and calling up 300,000 more poorly trained and ill-equipped Russians to the front, he is digging in his heels instead of course-correcting. In addition, Russia has aligned itself with China and Iran against the West and is even now using Iranian kamikaze drones to continue deadly attacks.

One way or the other, Russia will go on even if they have to replace Putin. Russia and its people can always claim that Putin was a madman and that they have no desire to fight, preferring instead to live in peace and prosperity with the West. With Putin off the geopolitical playing field, Russia and the West can shore up confidence-building measures and, over time, perhaps even build up some level of trust and cooperation again. Of course, Russia will need to pay up big time to rebuild the senseless destruction they brought to Ukraine, but that’s a small price to pay to return from the very depths of nuclear brinkmanship with the West.