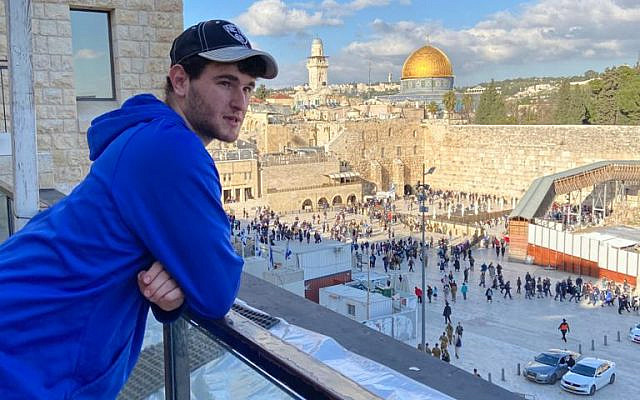 While most of the world is still shut down, the depression and sadness that many feel has not fully kicked in for me. If I was told a year ago that I could be anywhere in the world during a global pandemic, I would have said the Kotel. Little did I know, that would become a reality this year.

I moved into the dorms of Aish Hatorah one year ago from today, ready to embrace the next chapter of my life. What was meant to be a gap year between graduating college and getting a job has transformed into an unforgettable experience.

As an undergraduate at the University of Hartford I realized a terrible truth. Jewish peers of mine were not interested in connecting to their Jewish roots and I did not know certain traditions myself, even as small as writing my own name in hebrew. When an opportunity was presented to study at Aish HaTorah, I decided this was more important than going straight into the workforce. I graduated college and hopped on a flight to Israel the next day.

Yeshiva is very different from a college campus. For starters, I have a view of the Kotel from my bedroom window! This is an opportunity that my ancestors, for over 2000 years, have been praying for and I am living their dream. This is not something that one can take for granted and, even a year in, I sit on my balcony every day and meditate at the sight of the Kotel for at least 30 minutes. The experience is so rewarding that I chose to extend for a second year.

During the Corona pandemic, it was an easy decision to stick it out in Israel until it was safe to go back to the United States. Staying gave me a better opportunity to continue my studies and I also had a gut feeling it would be safer here in Israel. While the world seems to have plundered into madness, uncertainty and chaos, my life has not changed. In fact, I feel like I am the luckiest man in the world. Aish HaTorah could have sent all of its students home like most yeshivas, but they decided that my peers and I are worth the investment to take the risk of not only keeping us in the dorms, but providing three meals a day, having staff clean after us, and still have rabbis teach.

Then came Passover. Many of the remaining students never celebrated before and with no Rabbis around, these same guys had to step up and lead seders for the first time. The director of Aish HaTorah, Rabbi Dovid Rosman reflects on how he felt going into the holiday knowing we were on our own. “Before Pesach I was really nervous. Multiple Pesach Seders, led by students who last year didn’t know what Pesach really was, is a recipe for disaster. But then I remembered what I always teach- every challenge is an opportunity for growth. ‘Let’s see how we can make this an incredible growth experience.’ And that’s exactly what happened. Students were forced into a situation where they had to step up and quickly learn what others only learn after several years and perform. I learned from my amazing students that even the most difficult situations can bring about tremendous growth.”

A major emphasis at Aish HaTorah is pursuing personal growth. To see students step up and embrace an unprecedented challenge that no one was prepared for and succeed is exactly what Aish HaTorah trains their future Jewish leaders to do. While following government guidelines, just to sit at a Passover Seder while looking at the Kotel with my friends during the height of the lockdown, and reading the words, “Next year in Jerusalem” from the Haggadah, is an unforgettable experience. Nothing, not even a global pandemic, was able to ruin this meaningful holiday.

If there is any lesson that will be taken away from being locked down, it is gratitude. I do not know why I am blessed to be where, according to Jewish tradition, is the center of the Universe and the pinnacle of our faith. For someone who does not keep all of the Jewish laws and who has barely scratched the surface of my Jewish education, I had access to the Kotel when some torah scholars did not. To be grateful for everything I have is an understatement. While unemployment skyrocketed, the disease infected millions and killed way too many; my life has not changed. I wake up, study torah, and go to bed. That is paradise during these dark times and there is no way to downplay how lucky I feel. In fact, I may be the luckiest man in the entire world.

Even to be in Israel which Forbes at one point ranked as the safest country in the world is a blessing. From the positive atmosphere to the spiritual significance of being next to the Kotel, it’s a memory I will never forget. Beyond that, the most memorable experience, with 100 percent certainty, is seeing how the Jewish people never let anything stand in their way. My desire to come to yeshiva was to connect to four-thousand years of tradition that I feared was becoming lost. Now I see what makes the Jewish people unique. Whether it is exile, crusades, blood libels, a holocaust or a global pandemic, we look at every event as a learning opportunity to improve ourselves. This optimistic approach to life from a group of people who, after thousands of years of non-stop anti-semitism, (which would deter anyone from being upbeat and proud) is why there are no people like the Jewish people. We can endure anything with a positive attitude and a big smile.

The decision to go to yeshiva was one of the greatest decisions I ever made and I hope others make the same decision. Being quarantined at the Kotel meant the world to me and while we hopefully will never have to go through a global pandemic again, it is never too late to realize how special being a Jew is.