This year marks Elizabeth II’s Platinum Jubilee, the 70th anniversary of her rule. It will be marked by street parties across the United Kingdom and other Commonwealth realms. In June, the UK will also be treated with a longer, four-day Bank Holiday.

As an avid collector and researcher of Anglo-Jewish history, this remarkable event brings to mind how our community has celebrated royal occasions for centuries, marking countless past events. Our prayers for the monarchy extend far beyond our Shabbat morning request to “bless our sovereign lady, Queen Elizabeth” and to “preserve the Queen in life, guard her and deliver her from all trouble and sorrow.” The book I produced, “The United Synagogue: 150 Years of Service” features many more colorful and historic examples of this. These celebratory pamphlets of prayers range from the Golden Jubilee of Queen Victoria in 1887 to that of our present Queen in 2002. No doubt there will be another prayer composed for upcoming Jubilee too. 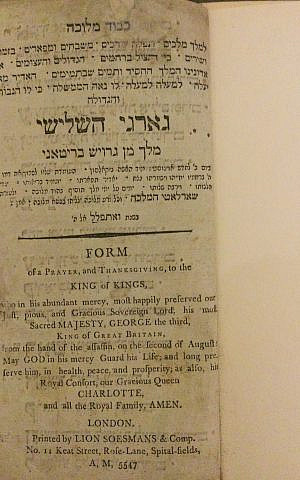 The first Jewish service for a royal occasion printed in London dates from 1787, well before the establishment of the United Synagogue. The Hebrew prayer commemorates the preservation of King George lll “from the hands of an assassin.” The unique copy of this 1787 pamphlet (illustrated) proudly sits within my collection.

In sadness as well as in joy, the Jewish community has joined with the nation, marking the more sombre royal occasions. In 1817, a granddaughter of George lll, Princess Charlotte, died in childbirth. Princess Charlotte was in line to become Queen, instead of Victoria. On the day of her funeral, for the Great Synagogue service, Hyman Hurwitz composed a Hebrew Dirge entitled “Israel’s Lament”: 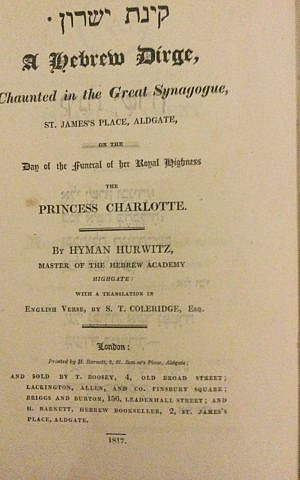 The title-page of “Kinath Yeshurun”, created for the funeral of Princess Charlotte in 1817

Mourn for the universal woe

With solemn dirge and fault’ring tongue:

For England’s Lady is laid low

So dear, so lovely, and so young! 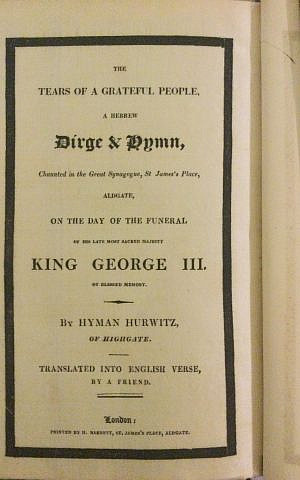 The composition was translated into English verse by Hurwitz’s friend, the famous poet, Samuel Taylor Coleridge. Hurwitz later became the first Professor of Hebrew at University College London. In 1820, Hurwitz composed another prayer for the death of King George III, named “The Tears of a Grateful People.” This time, its English translation was attributed anonymously, simply stating that it was “translated into English verse by a friend.” However, at least one copy has the initials STC written next to it, indicating that Coleridge was responsible for this English rendition too. My copy is one of a few special copies printed on silk and belonged to the Duke of Sussex, a son of George III, and a noted Hebraist.

Thus, royal occasions have been marked by the Jewish community for centuries. The righteous monarchs of our country, “and all the royal family,” have always received our blessings and prayers, for the Great Synagogue service. For this Platinum Jubilee, “England’s lady,” Queen Elizabeth II, is no different, and may her “spirit of wisdom and understanding” grace us for years to come.