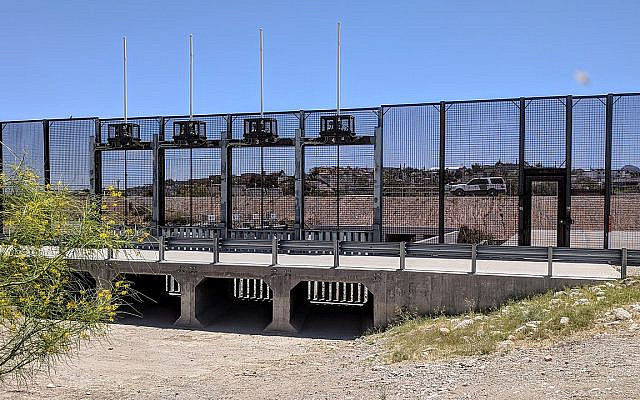 The border fence between El Paso, Texas and Juarez has an elaborate gate structure to allow floodwaters to pass under. The grates prevent people being able to cross under, and can be raised for floodwaters carrying debris. Beyond the fence is a canal and levee before the Rio Grande. (Dicklyon - Own work, CC BY-SA 4.0, Wikipedia Commons)

Liberal Jews are asking a series of questions about Donald Trump and his supporters. Among their concerns and inquiries: What do they (Republicans) believe? Don’t they care about our democracy? Why, even a year after the 2020 election, are they remaining aligned with President Trump?

As a community, Jews need at this time to get past the persona of Donald Trump if we are to fully appreciate the deep-seated political differences that now define the American political marketplace and even our own community. Trump has no doubt empowered these alternative views about our society, and in some real measure transformed the arguments being raised. His primary contribution has been to capture the discontent, anger and concerns of millions of Americans, but he did not create this profound social disconnect that today divides our nation.

Can we bridge our differences? At the outset, before we can consider solutions, we need to better understand the current political realities. This is a cultural conflict, as it is a political war over America’s destiny and identity. The concerns here are broad, deep and significant. The literature is now in place to help us better unpack what is going on in this nation. With more than 4,000 books already in print about this president, including such books as Peril (Woodward & Costa); Betrayal (Karl); Landslide (Wolff); Frankly, We Did Win this Election (Bender); and Front Row at the Trump Show (Karl), we can secure a more complete perspective of his presidency and the emergence of the “other” America.

What this all suggests is that we have multiple Americas, something that we have experienced before in our history. No doubt, at this moment, we are dealing with the threat of autocracy, the presence of conspiracy theories, and the growing presence of hate-directed actions, targeted against minorities, making all that is happening that much more challenging not only to us as individuals but to the character and content of our democracy. The agenda ahead needs to be about reclaiming the American democratic story and the Jewish community must play a critical role.

I have identified four defining issues (immigration, climate change, the economy, and race/whiteness) where we find sharp differences and conflicting beliefs with liberal perspectives.

Immigration: Based on a 2016 Pew Report, 66 percent of registered voters who supported President Trump call immigration a “very big problem” in this country. Perhaps no proposal put forward by Donald Trump has resonated more strongly with his supporters than his initiative to build a wall along the U.S. border with Mexico. Fully 79% of Trump supporters favored building a wall along the entire US-Mexico border.

The Reuters/Ipsos Report noted that 60% of Republicans hold to the view that “immigrants are invading our country and replacing our cultural and ethnic background.” We should note that this idea of “replacement” is also being employed by the alt-Right in connection with Jews, whom they view as a threat to “white” Americans.

The Economy: To the extent that economic anxiety mattered in Trump’s rise, it is represented by what has been defined as “radicalized economics”— or the belief that ‘undeserving minority groups’ are getting ahead while hardworking white people are being left behind.

Republicans define the American Dream as the right to pursue prosperity without government interference. That’s achieved by self-discipline, enterprise, saving, and investment by individuals. Indeed, on such policy questions as taxes, health care, social welfare, trade, the national debt, and regulation, we need to remind ourselves about the deep philosophical differences that have historically separated our two political camps.

Race/Whiteness: But the distinctive political differences today are marked as much by cultural and racial themes, for some, this is about the reassertion of “whiteness” in American society. Whites are perceived to have lost their place. Hochschild in his book Strangers In Their Own Land suggests that this phenomenon has driven many voters to the Republican ledger.

For Hochschild’s victims, the rise of these new groups of social influence and the demise in the economic standing of these white workers, “led to an unfair outcome of the initial competition – not only did they not get what they thought they deserved, but they also experienced other groups “cutting in line.” This frustration at the perceived lack of respect for their ideas of fairness, including the scorning of these in the “liberal” press and TV channels, made them feel “strangers in their own land.” It prompted them to prefer a nationalistic perspective over, say, a class-struggle one in understanding their situation.” As she goes onto suggest, liberals, the Northerners, and the Washington politicians were seen as creating these new economic and political outcomes.

The Role of Government:

Maybe it is helpful to understand what political scientists label as the Group-Based Dominance Theory. A significant part of the Trump base believed that his administration’s policies were seeking to restore their status and influence within this society. In turn, they perceived the 2020 election outcome as a direct threat to their interests. With Biden’s victory, groups that felt vindicated and supported by President Trump now believed that they would again be ignored, and their interests displaced.

We need to account for two other critical factors, no popularist undertaking occurs without embedded leadership. Donald Trump and his supporters possess each of these critical elements: media access, a cadre of elected officials at all levels of government, and a core of wealthy underwriters.

Likewise, on the grass-roots side of this equation, governors, city and county officials, and school board members are continuing to effectively market the Trump brand. The power to convey these political messages remains in place, both at the leadership level and among local elites.

On the Jewish Ledger:

In connection with the Jewish community, my Republican friends have expressed to me what they hold to be the four core challenges that in their view Donald Trump has effectively addressed:

Where This Leaves Us:

In the midst of a pandemic, a society filled with racial strife and economic challenges, fear is driving both those who continue to embrace our 45th President and many of those who oppose him.

The Jewish community, like much of American society, has reacted to the Trump phenomenon by refusing to address the issues that today divide our community and this nation. Rabbis, community organizers, and institutional leaders have all declared that it is politically not feasible to hold discussions around our partisan politics or the crisis in Diaspora-Israel relations.

As a community, we seem paralyzed to enter into these murky waters, preferring instead to simply accept political division and religious rejectionism. Sadly, this same behavior marks the American landscape as a whole.

The Impact of Donald Trump’s Presidency on American Jews and Israel, an edited collection of critical articles and perspectives on the 45th president that I had the honor to edit, speaks to the absence of a serious American Jewish discussion on these core themes. Each of the writers to this volume adds a dimension to the challenging but essential issues of understanding where Jews find themselves today in the American political context.

We need to create across this nation essential Jewish conversations on three core themes.

Managing the Political Divide Among Us: How we heal our community and model civil discourse for all Americans represents our core agenda.

If we have learned anything from Jewish history, a divided and dysfunctional communal system leads to disastrous outcomes for Jews. From Temple times of the first century and throughout the experiences of Diaspora Jewry, the absence of a shared communal vision and a broad collective engagement in matters of state has led to our demise.

We have a profound stake in the American democratic story. Jews have thrived within this society. Civic engagement and participation is core to our nation’s strength as a democracy and has represented a core element to the American Jewish story. However, when we are internally divided, our ability and effectiveness to pursue our collective interests is significantly impaired. Beyond the public venue, we need to model for younger Jews the value of Shalom Bayet (peace within the house), the capacity of our community to heal its differences and to regain the essential momentum for mutual action.

Even beyond the political realm, we were reminded by the 2020 Pew Study on American Jews that as a religious community we are deeply divided by denominationally. Can we engage in conversations that bring religious liberal Jews together with their Orthodox counterparts, as we seek to strengthen religious understanding within our community.

Finding common ground on Israel represents a third area for such essential conversations. Are we able to strengthen the Diaspora-Israel connection?

Ultimately, we will require major Jewish organizations to help manage these conversations and the training of facilitators to manage these dialogues.

There is no easy prescription for moving these conversations forward. Liberal Jews, however, will need to fully appreciate the strong and real concerns that their Trump brethren hold. We are reminded that political beliefs, as with religious ones, are deeply embedded. Our initial task is to understand the “whys” associated with such viewpoints. Our burden here is not to convert but to listen to the storylines of those who hold political positions different from our own, understanding that these perspectives are driven however by the same motivating forces that also help to shape our views, such as particular social beliefs, in some instances fear, and a desired set of political outcomes.

The road forward is neither certain nor easy but without a communal dialogue, we all will remain stuck in our respective silos, unhealthy for our society and problematic for the Jewish community!

About the Author
Steven Windmueller, Ph.D. is an Emeritus Professor of Jewish Communal Service at the Jack H. Skirball Campus of Hebrew Union College-Jewish Institute of Religion in Los Angeles. Prior to coming to HUC, Dr.Windmueller served for ten years as the JCRC Director of the LA Jewish Federation. Between 1973-1985, he was the director of the Greater Albany Jewish Federation (now the Federation of Northeastern New York). He began his career on the staff of the American Jewish Committtee. The author of four books and numerous articles, Steven Windmueller focuses his research and writings on Jewish political behavior, communal trends, and contemporary anti-Semitism.
Related Topics
Related Posts
Comments