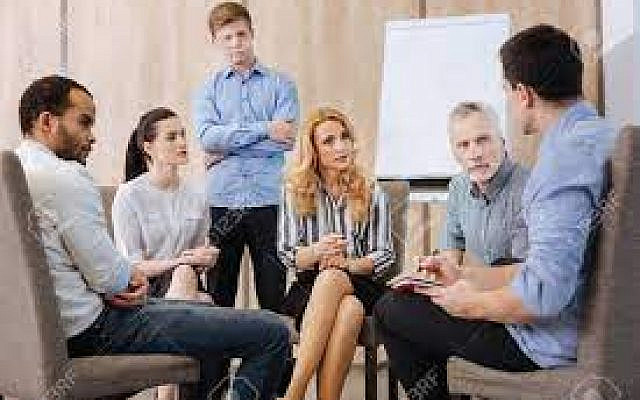 The Jewish community, like much of American society, has reacted to the Trump phenomenon by refusing to address the issues that today divide our community and this nation. Rabbis, community organizers and institutional leaders have all declared that it is politically not feasible to hold discussions around our partisan politics or the crisis in Diaspora-Israel relations. We have simply stopped talking to one another!

As a community, we seem paralyzed today to enter into these murky waters, preferring instead to simply accept political division and religious rejectionism. Sadly, this same behavior also marks the American landscape as a whole.

Released earlier this week, my book, The Impact of Donald Trump’s Presidency on American Jews and Israel, represents an edited collection of critical articles and perspectives on the 45th President, speaks to the absence of a serious American Jewish discussion on these core themes. Each of the writers in this volume adds a dimension to the challenging but essential issues involving our Jewish community.

I am proposing that we organize across this nation essential Jewish conversations in three core areas: political divisions, our religious divide, and the Israel-Diaspora connection. What better time as we prepare to come out of this pandemic for us to construct such deliberative and essential discussions. Each issue has its own distinctive considerations, yet our community has been broken apart by the presence of all three concerns.

Managing the Political Divide Among Us: How we heal our community and model civil discourse for all Americans represents a core agenda that Jews can and should address.

If we have learned anything from Jewish history, a divided and dysfunctional communal system leads to disastrous outcomes for Jews. From Temple times of the First Century and throughout the experiences of Diaspora Jewry, the absence of a shared communal vision and a broad collective engagement in matters of state has led to our demise.

We have a profound stake in the American democratic story. Jews have thrived within this society. Civic engagement and participation is core to our nation’s strength as a democracy and has represented an essential element to the American Jewish story.  However, when we are internally divided, our ability and effectiveness to pursue our collective interests is significantly impaired.

Beyond the public stage, we need to model for younger Jews the value of Shalom Bayet (peace within the house), the capacity of our community to heal its differences and to regain the essential momentum for mutual action. Even as we agree to disagree in some cases, the essential element here is garnering a better understanding of our respective political beliefs and concerns.

Engaging Jews around our Religious Divisions: Liberal religious Jews in dialogue with traditional/Orthodox Jews represents a second critical agenda. The Pew Study on American Jews points to the divisions among this nation’s Jews in connection with this issue of our denominational divide but also addresses the serious disconnect over Israel. Pew noted that Jews from our various denominational groups indicated that they had very little in common with their fellow Jews from other religious streams. How we see and respect one another through the religious lens is a central piece to these facilitated discussions. Here, we will be called upon to learn more about one another, especially our religious practices and beliefs, while seeking to find areas of mutual consideration.

Finding Common Ground on Israel: What binds Jews together around Israel? Rebuilding the Diaspora-Israel connection must be seen as an essential objective. We cannot allow the weakening of this special relationship that binds Jews together.  Here, Israelis in conversation with American Jews ought to frame the third objective in this dialogue series, as we come to better understand and respect one another, as we move into the eight decade of the Jewish State.

To effectively create these essential conversations, we will require major international and national agencies and local communal organizations to manage and promote these conversations and to provide the training of facilitators.  The broader we are able to expose Jews to such discussions, the more likely we can build a higher degree of understanding, engagement and shared action.

Jews can begin a process of reengagement with one another around these complex and divisive issues. To accomplish this, we will need to bring together trainers to lead such challenging discussions. The Trump volume, introduced above, along with a study guide designed to assist discussants, will help to frame these deliberations.  Whether in connection with our political, religious or Israeli divisions, the road ahead demands that we create the opportunities for these essential conversations to take place!

About the Author
Steven Windmueller, Ph.D. is an Emeritus Professor of Jewish Communal Service at the Jack H. Skirball Campus of Hebrew Union College-Jewish Institute of Religion in Los Angeles. Prior to coming to HUC, Dr.Windmueller served for ten years as the JCRC Director of the LA Jewish Federation. Between 1973-1985, he was the director of the Greater Albany Jewish Federation (now the Federation of Northeastern New York). He began his career on the staff of the American Jewish Committtee. The author of four books and numerous articles, Steven Windmueller focuses his research and writings on Jewish political behavior, communal trends, and contemporary anti-Semitism.
Related Topics
Related Posts
Comments