Today was the day. Today after ten days of concentrated and brutal training, of learning to become one with my handgun, no matter the intensity of the moment, no matter the panic within the eyes of others, and no matter the ferocity of live gunfire blasting all around me, I would undergo the Ambush Test.

With Special Agent Eric Gifford as the driver and me sitting in the passenger side of the SUV we would drive into a simulated ambush and I would be tested to see if I would keep my cool under live gunfire, pay attention to detail, be mindful of situational awareness – meaning: be aware of innocent bystanders while scanning for the enemy, accurately aim at and shoot the target, and have the ferocity to neutralize the enemy.

One wrong move could involve serious injury or worse!

Swirling through my head was the Shin Bet anti-Ambush counter-terrorism defense sequence. Each step was crucial. Each technique rolled into the next. And each served a purpose to attain the desired goal – our protection and the elimination of the enemy.

I was in the zone – where utter concentration slowed down time into increments of energized movement.

As I waited for the ambush to commence, questions raced through my mind:

Would I lose my cool?

Would I reach for my holstered handgun without my hand being caught in my shirt?

Would I be able to rapidly unbuckle the seat belt or lose precious seconds releasing it?

Would I remember to draw my gun, rack the gun barrel with force as I pushed the gun forward through the open window, mustering my new “Beast Release Energy” yelling at the top of my lungs, “CONTACT!!!”?  ( “Contact” means fire at the enemy.)

Would I sit up in my seat, position my right leg on the seat, my left leg on the car floor, push my upper body through the window, press my body against the car window frame, extend my hands in a triangle form, aim at the target and fire my handgun and yell, “DOWN!!!”? (Meaning the enemy was down on the ground but possibly still viable and a threat.)

Would I then turn to my partner – Special Agent Gifford – make sure we have eye contact – so that we don’t accidently shoot each other – lift up the car handle from the outside of the car door frame, push open the door, jump nearly two feet from the SUV floor board, land on my feet, then turn to the left and to the right to be mindful of any bystanders without once “flagging” (which is pointing the gun at innocents and fellow agents) while in a state of extreme adrenaline-infused and heightened reflexes?

Would I maintain safety and turn my head to look back at Special Agent Gifford, who would be standing outside the SUV, shooting from behind the left side of the car engine, as we make eye contact?

And only when both of us confirmed each other’s presence would we scream at the top of our lungs, “MOVING!!!”, “MOVING!!!”. And then charge full strength towards the enemy, engage the assailant, and neutralize the danger ?

And lastly, check my gun for “safety” once the target was down? (Safety is making sure the gun was unloaded and could not discharge.)

In a nutshell, would I do this series of  battle tested ambush defense steps under enormous pressure and danger and at super speed, all within 60 seconds?

Special Forces Nelson gave the command. Immediately the ambush began. Blood pumping. Heart racing. Reflexes sparking. The Beast awoke within me. My voice changed from mild mannered to predatory hunter. My inner beast came to the forefront. My body and mind became one. Fear was eliminated. I was no longer the same man that entered training ten days earlier.

Only eleven months before, I was lying in a hospital bed with double pneumonia as the COVID virus was spreading throughout my lungs shutting down my ability to breath, squeezing out any oxygen from my blood to the point at walking even five feet meant potential catastrophe.

And now with the grace of Hashem, G-d, in the Merits of my Holy Parents, I was displaying speed, agility, and ferocity that no one would have expected.

The spirit and abilities of my glorious and heroic Palmach Warrior Father was set ablazed that day.

It was Captain Tomer who fanned the newly reignited fire.

I am now always Ready! 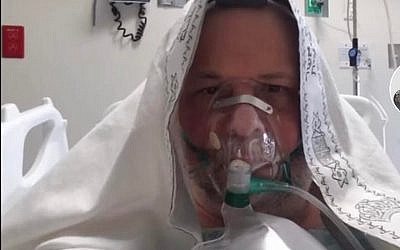 (courtesy)
About the Author
Rabbi Avi Schwartz, is the son of the Palmach Legend, Motke Eish HaGarzen, Motke the Axeman. His Father was the commander that led the 21 Palmach Warriors who conquered Har Tzion ( Mount Zion), King David's Tomb in 1948, rescuing 1,700 Jewish men, women and children from the onslaught in the Jewish Quarter of the Old City. Rabbi Schwartz is both a Black Hat Rabbi and Zionist activist. A filmmaker and writer, with works in Netflix, he is also the creator of the first apps against BDS: Fight BDS and BDS Myth Busters (BDS Myth Busters is sponsored by the Hollywood icon and anti-BDS activist Roseanne Barr. Rabbi Schwartz is the VP of Digital Marketing and Director of Energycite, a breakthrough technology in energy conservation. He also is the founder of Torah Teen Palmach Center, training teens to be future leaders in the tradition of the Palmach.
Related Topics
Related Posts
Comments