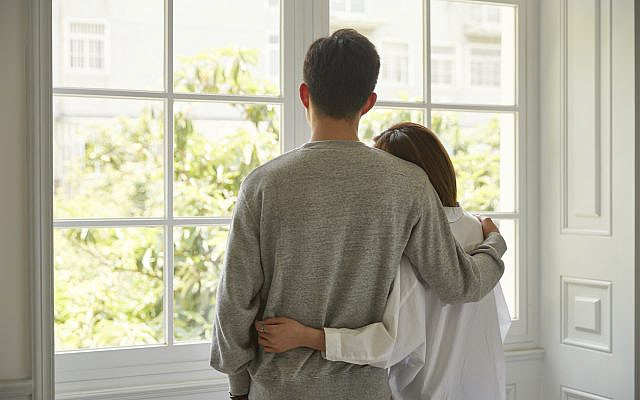 A couple stands arm in arm, supporting each other. (iStock)

To my best friend when she finds out that she’s dying of cancer….

To our neighbors when they lose a child… when they’re divorcing… when one of them loses a job….

Rabbi, how should I act? What should I say?”

How about — at least initially — saying nothing?

In the awful, uncomfortable silence that lies between us and the sufferer, we feel the urge to fill that wordless void, to say something, anything that will restore a sense of order, calm, joy to that person and to ourselves. We have all thought or asked the above questions when confronting someone in deep crisis or pain. Most of us genuinely don’t know how to act, what to say, which tools in our relational toolboxes might heal the hurt, end the pain. We want to be helpful to them, even and especially as we shudder when we contemplate being in their shoes.

But there are no answers to any of these questions, at least not adequate ones. This is because there are no good answers to why we suffer, we simply do. Jewish tradition recognized this brutal human truth thousands of years ago:

Or even the suffering of the righteous. (Avot 4:15—Sefaria translation)

Nothing we might say to a person suffering, at least initially, can come anywhere close to genuine consolation. A mourner, a sick person, a loved one tasting life’s bitterness might shriek, “God, why me?” but that is never our cue to respond with theological bromides or even to “casually” change the subject. In fact, the words we speak risk becoming platitudes meant more to allay our own supreme discomforts than to support the one/s in need of comfort.

The person suffering in our presence doesn’t need us to say something.

They need us to say nothing, so we can be fully present with them.

Judaism recognizes that being fully present — silent, supportive witnesses to our loved one in their hour of need — is agonizing and exhausting. We have no means to escape the flood of pain and sadness flowing in torrents from his contorted face, from her shrunken body, from their weeping and grief. We must sit, or stand, or tread water with them, holding them for dear life to prevent them from going under the waves of anguished bewilderment washing over them. Words might feel like a life raft, a blessed distraction from the torrent of dark emotions, and at times they can be. Too often, in the first throes of loss or crisis, they are a distraction and a life raft for us only. The person suffering is still drowning, before, during and after we leave him or her. Therefore Pirke Avot, the great book of ancient Jewish wisdom commands us:

There is a time for words, but times of crisis and vulnerability are not necessarily that time. Being fully, silently there, creating space to truly listen to the sufferer with love, is the watchword beyond all spoken words to the people for whom we care:

“I am ready to walk, crawl, and stumble with you.”

“I cannot rid you of the loneliness that comes with so much loss, but my being here reassures you that you will not be lost, because you are not alone.”

The biblical book of Job is one of our tradition’s earliest stories about the imperative of compassionate silence when we confront someone suffering. Job, a supremely righteous man, becomes the pawn in a heavenly bet between God and the Satan, God’s celestial prosecutor, to test the sincerity of Job’s piety.  As Job sits in the dust, grieving the loss of his property, his children, and his health, his three closest friends visit him, “To console and comfort him.” (Job 2:11)

The Bible then tells us that when they see Job from a distance and can’t recognize him, given how haggard he is, they weep loudly, tear their clothes, and grieve with him:

They sat with him on the ground seven days and seven nights. None spoke a word to him for they saw how very great his suffering was.” (Job 2:12—Sefaria Translation)

Maimonides, the great scholar of Jewish philosophy and law, uses Job’s friends’ initial silent support for Job as the model for how one visits a mourner during shiva (the seven-day mourning period):

The mourner sits at the head of the company. The comforters are permitted to sit only on the ground, as Job 2:13 states: “And they sat with him on the ground.” They are not permitted to say anything until the mourner opens his mouth first, as it is written (Job 2:13.): “None spoke a word to him.” (Laws of Mourning 13:3—Touger translation)

However, no sooner does Job complain bitterly about having been abused by God than his friends become his pugnacious, defensive opponents and God’s self-appointed defenders. Over the course of the book, using a torrent of words, they accuse Job of having earned his suffering as punishment for his purported evildoing.  They are transformed from silent supporters into loud and angry harassers. They add insult to injury by blindly defending God and castigating Job unjustly.

Commenting on the book centuries later, the talmudic rabbis refer to the friends’ behavior as a form of onaat devarim, verbal oppression, which is forbidden by Jewish law:

If torments are afflicting a person, if illnesses are afflicting him, or if he is burying his children, one may not speak to him in the manner that the friends of Job spoke to him. “Is not your fear of God your confidence, and your hope the integrity of your ways? Remember, I beseech you, what innocent person ever perished?” (Job 4:6–7). (Babylonian Talmud, Bava Metzia 58b—Sefaria translation)

This talmudic teaching makes it clear that Job’s friends did right when they sat with him in silence, and they did so very wrong by engaging in “(un)holy harassment.”

We are, thankfully, not Job’s friends. We aren’t looking to defend God’s behavior by attacking or accusing our loved ones who suffer. We just want to make them feel better.  Yet, this talmudic teaching applies as much to us as it did to Job’s friends. It expresses the deep Jewish insight that our role with a person suffering is to sit with him or her in the uncomfortable silence, to simply be there with our compassionate silence. The words will come later, when and if the sufferer is ready to speak. Yet in that present moment, we must just be present, saying nothing.

To our friends, neighbors, colleagues, and loved ones who suffer, that says and means everything.

About the Author
Dan Ornstein is rabbi at Congregation Ohav Shalom and a writer living in Albany, NY. He is the author of Cain v. Abel: A Jewish Courtroom Drama (The Jewish Publication Society, 2020. https://jps.org/books/cain-vs-abel/) Check out his website at danornstein.com
Related Topics
Related Posts